I’ve been thinking long and hard about this, I watched a lot of cricket in 2017, I’m going to go month by month I saw so many top performances!  This could well end up being more like a novel than an article.  I’m only including cricket I saw live.

I have an overlap in April and May with the rugby season still in full flow my cricket watching is therefore limited. My first top performance goes into May.

Essex made the short journey to The Oval to play Surrey in the Royal London One Day Cup, they bowled first and despatched Surrey for 210.  The great Sangakarra made only 6 much to my disappointment, he does feature later here though.  That felt like an easy target to chase, but oh no, Essex managed to lose their wickets at a pace too and were 128 for 7.  Enter Simon Harmer, a new signing for Essex, we’d get to know a lot more about his ability with the ball over the summer but on this day it was his bat that did the talking.  he and captain Ryan ten Doeschate put on 51 before ten Doeschate was out.  It still felt a big task for Essex, but Harmer was equal to it, he batted for 72 minutes, faced 53 balls and finished on 44 Not Out, as Neil Wagner and Matt Quinn making cameo appearances to help Essex to a win. 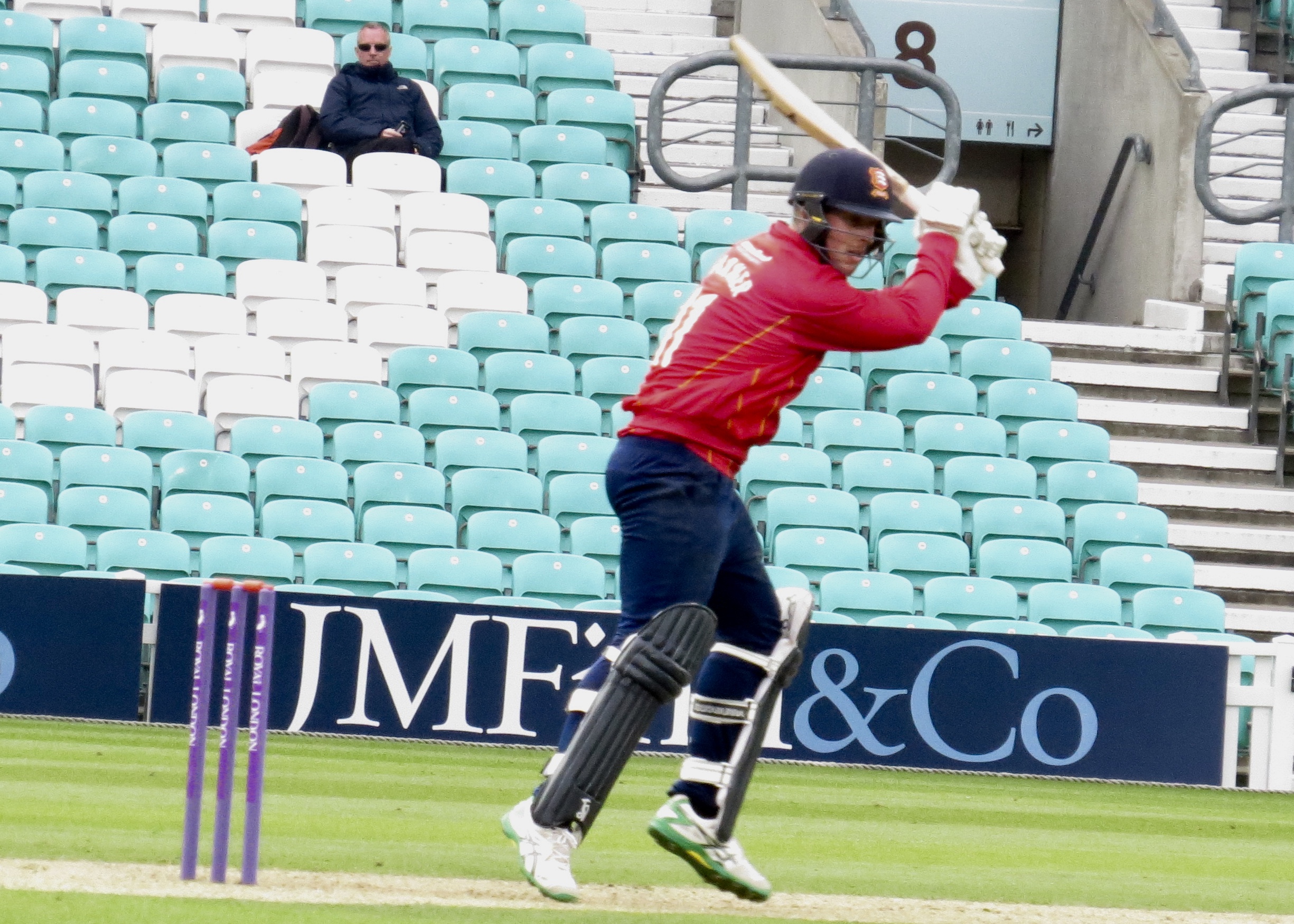 I arrived late on Day 1 of the county championship match between Essex and Surrey, I missed 4 Surrey wickets and was walking to my seat as a fifth fell.  I can remember tweeting my surprise and hoping that Sangakarra wasn’t out early!  I wanted to see the great man bat.  I got my wish, he basically put on a masterclass alongside young Surrey man Sam Curran.  The young Curran made a very entertaining 90 and during that day Kumar Sabgakarra made 179 classy runs.  He reached his 200 early the next day.  It was an absolute privilege to watch him bat, he really is a legend of the game.  His innings saved his team from a loss as they went from 31 for 5 to 369 all out.  The match was drawn after young Essex batsman Dan Lawrence made 107 t help take his team to 383.  Surrey made 269 for 9 in their second innings as young Essex bowler Jamie Porter took 5 wickets to add to his 4 from the first innings. 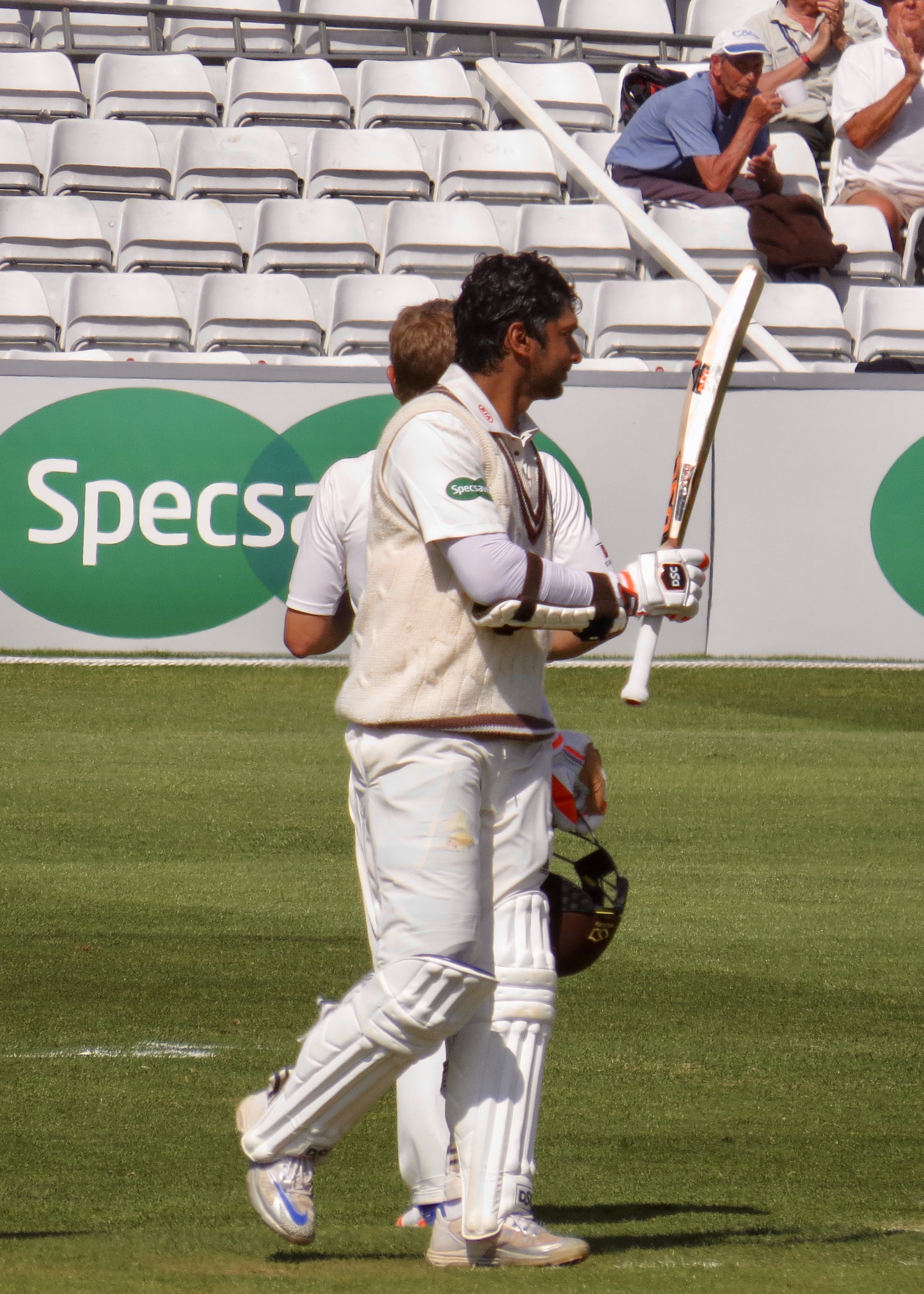 I went to 7 Champions Trophy matches and saw many great performances.  Tamim was a player I wasn’t familiar with, but he certainly made a huge impression while batting for his country.  He batted for 183 minutes scoring 128 runs from 142 balls, looking at that now I’m quite surprised it was that many it was an exciting century with 12 4’s and 3 6’s, a really entertaining innings! 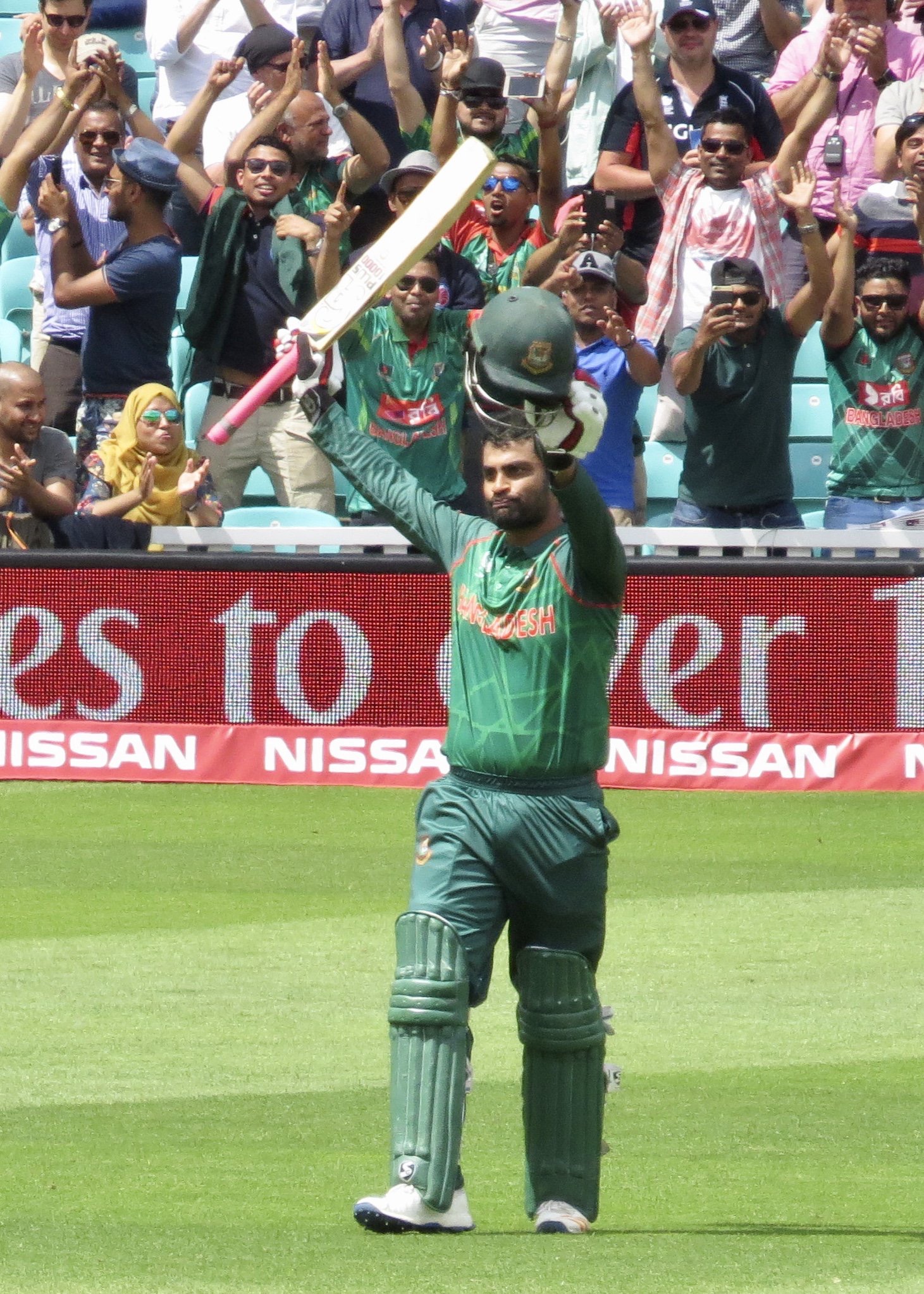 The second century of the day came from Joe Root, for some bizarre reason in my mind it wasn’t as entertaining as Tamim’s, yet he used fewer balls.  He scored 133 runs from 129 balls, including 11 4’s and a 6, he batted for 202 minutes helping England to their first win in this tournament. I sometimes worry about Root playing very format of the game for England, he was struggling to run at times during this innings, but, it was a very fine knock. 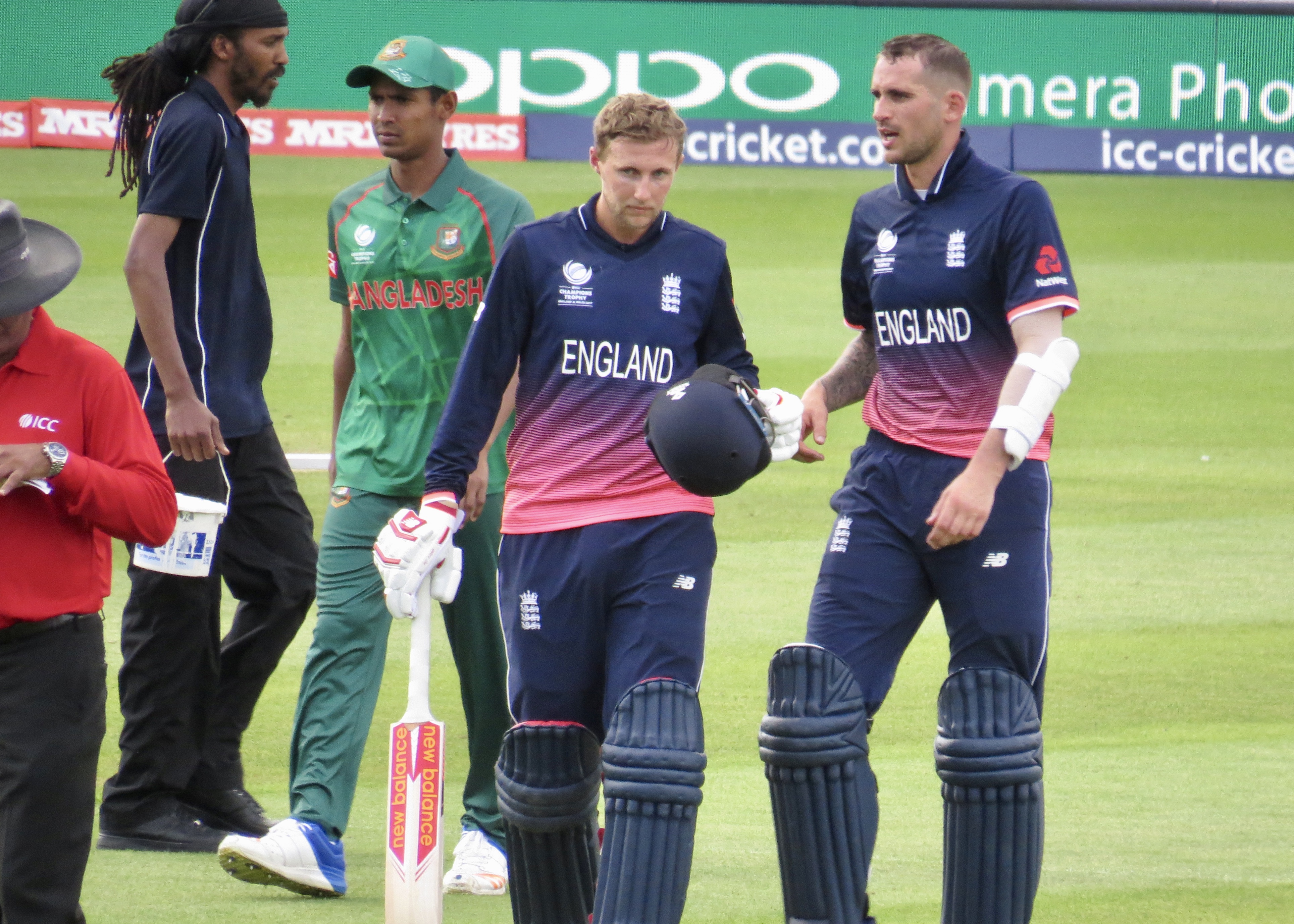 Day 2 of my Champions Trophy tournament and I saw a 3rd century.  This time it was from the bat of Kane Williamson.  This tournament was special in allowing fans in this country to see some of the very best cricketers in the world over a short period of time.  Williamson scored his 100 from 97 balls, including 8 4’s and 3 6’s,  before he was run out, he batted for 148 minutes and was a delight to watch! Josh Hazelwood took 6 for 52 in a rain affected no result match. 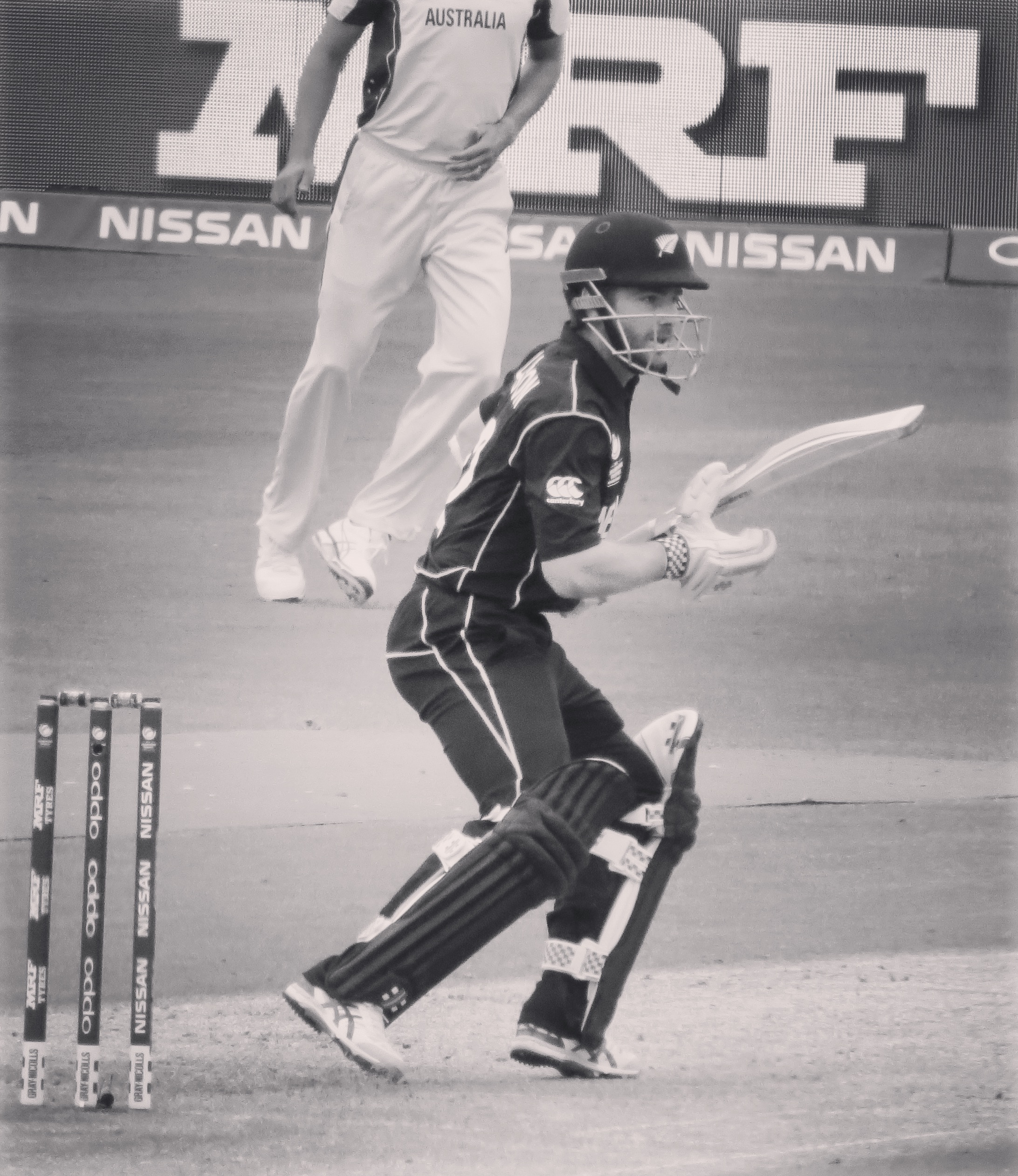 I’d seen Pakistan beat South Africa by the Duckworth Lewis method and seen AB de Villiers out for his first Golden Duck the day before this match.  I was hoping to see Virat Kohli score big, but unbelievably he was out for a Duck! However Dhawan didn’t disappoint, he scored 125 from 128 balls batting for 198 minutes, he hit 15 4’s and a single 6.  His endeavours weren’t enough to see India to a win and the group was thrown open as Sri Lanka won the match by 7 wickets. 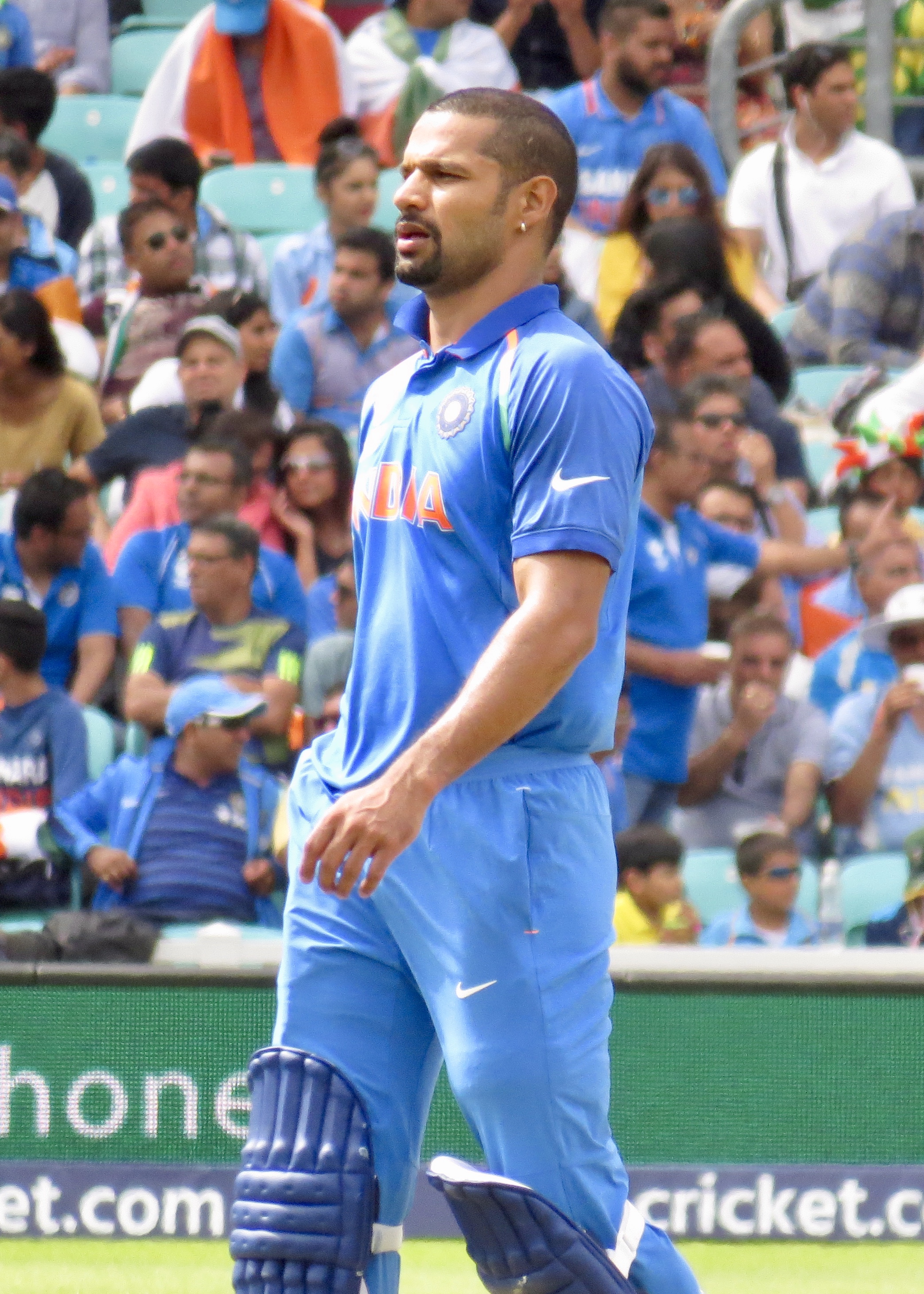 I can’t pick one performance from this match, I went along hopeful that Pakistan would win, yet not truly expecting that they would.  However they confounded all expectations!  There were several great performances, mostly from Pakistan, so, a mention for Fakhar Zaman who made 114 from 106 balls helping to take Pakistan to a total of 338 for 4 from their 50 overs.

A total that shouldn’t have been out of the reach of an Indian team full of classy batsmen, however  along came Mohammad Amir, he destroyed the top order, taking the wickets of Sharma, Dhawan and Kohli to see India fall to a shocking 33 for 3!  The only Indian player who acquitted himself well with the bat was the All Rounder Hardik Pandya, he made 76 runs from 43 balls before he was the victim of a crazy run out!  Bowler of the tournament Hasan Ali took 3 for 19, Amir ended the match with 3 for 16 and India won the game by 180 runs! 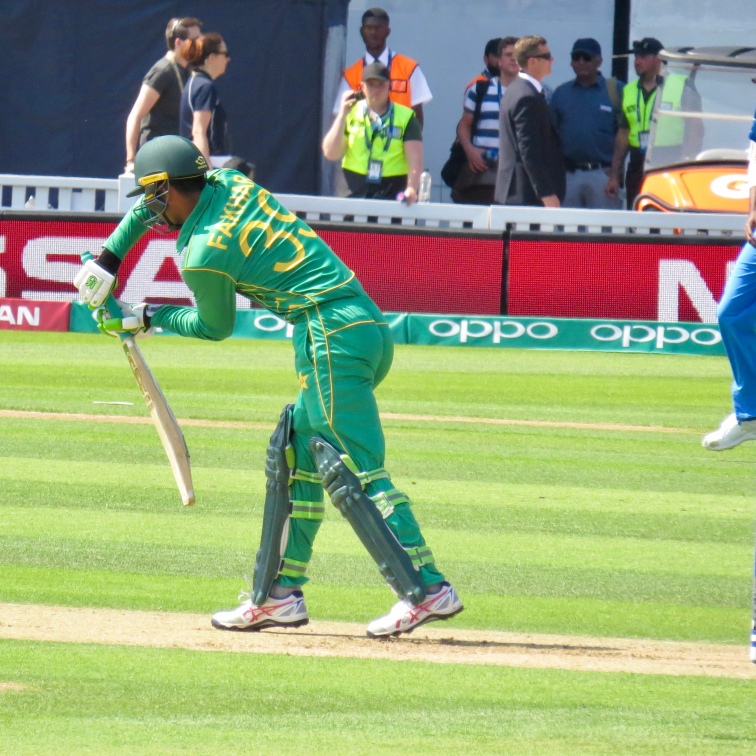 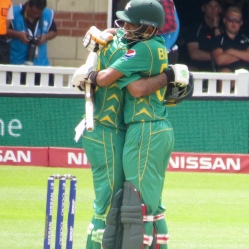 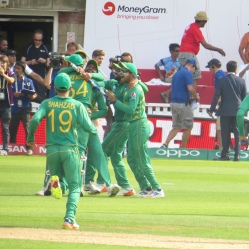 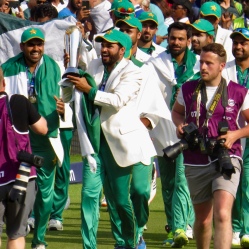 This was in the middle of the Champions Trophy, but a must watch game.  And what a game it was!  There were 4 outstanding performance on the day, 2 on the losing side and 2 on the winning.  Alastair Cook made 133 runs from 128 balls, a steady rate, his county captain Ryan ten Doeschate had one of his best innings of the summer, scoring 102 runs from 66 balls.  As an Essex member and fan, the total made by my team 370 for 5 felt like a winning score.

However Steven Mullaney with 111 runs from 75 balls and the man with my performance of the day Samit Patel had a simply magnificent innings making 122 runs from 123 balls.  Looking at the stats now, Mullaney scored more boundaries, but it’s Patel’s innings that has stayed with me.  the pair ensured their team won the semi-final.  Then one Alex Hales ensured they won the Final. 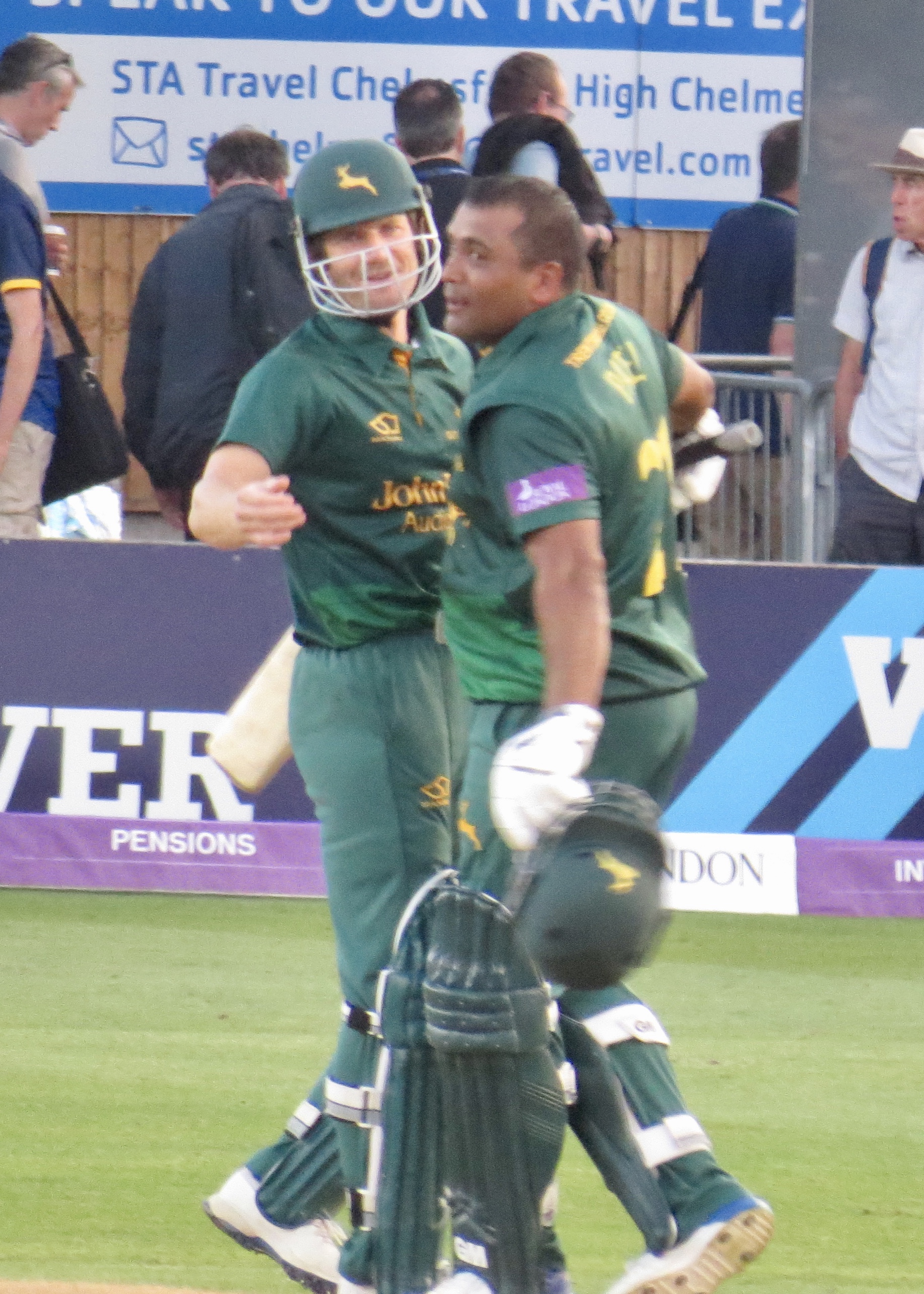 Essex made an amazing 541 for 9 in their first and only innings, James Foster back in the team and back in form scored 121 runs, but it’s Ravi Bopara who batted for 8 hours and scored 192 runs who takes the batting honours for this game.

Simon Harmer was outstanding!  He bowled just under 46 overs and took 6 wickets for 92 runs in Warwickshire’s first innings, before bowling another 20.2 overs in their second taking 8 wickets for 36 runs!  An amazing 14 wickets across the game! 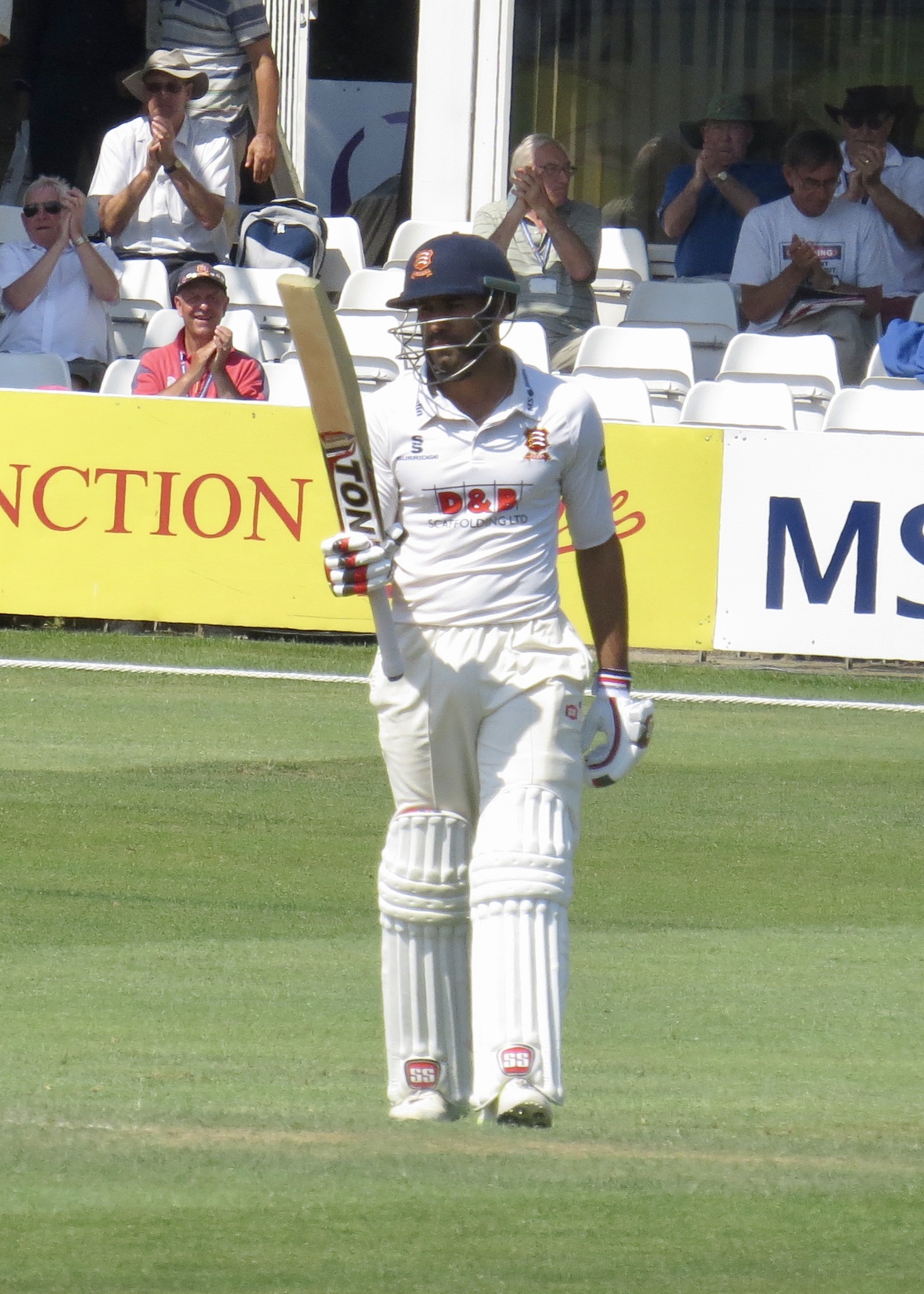 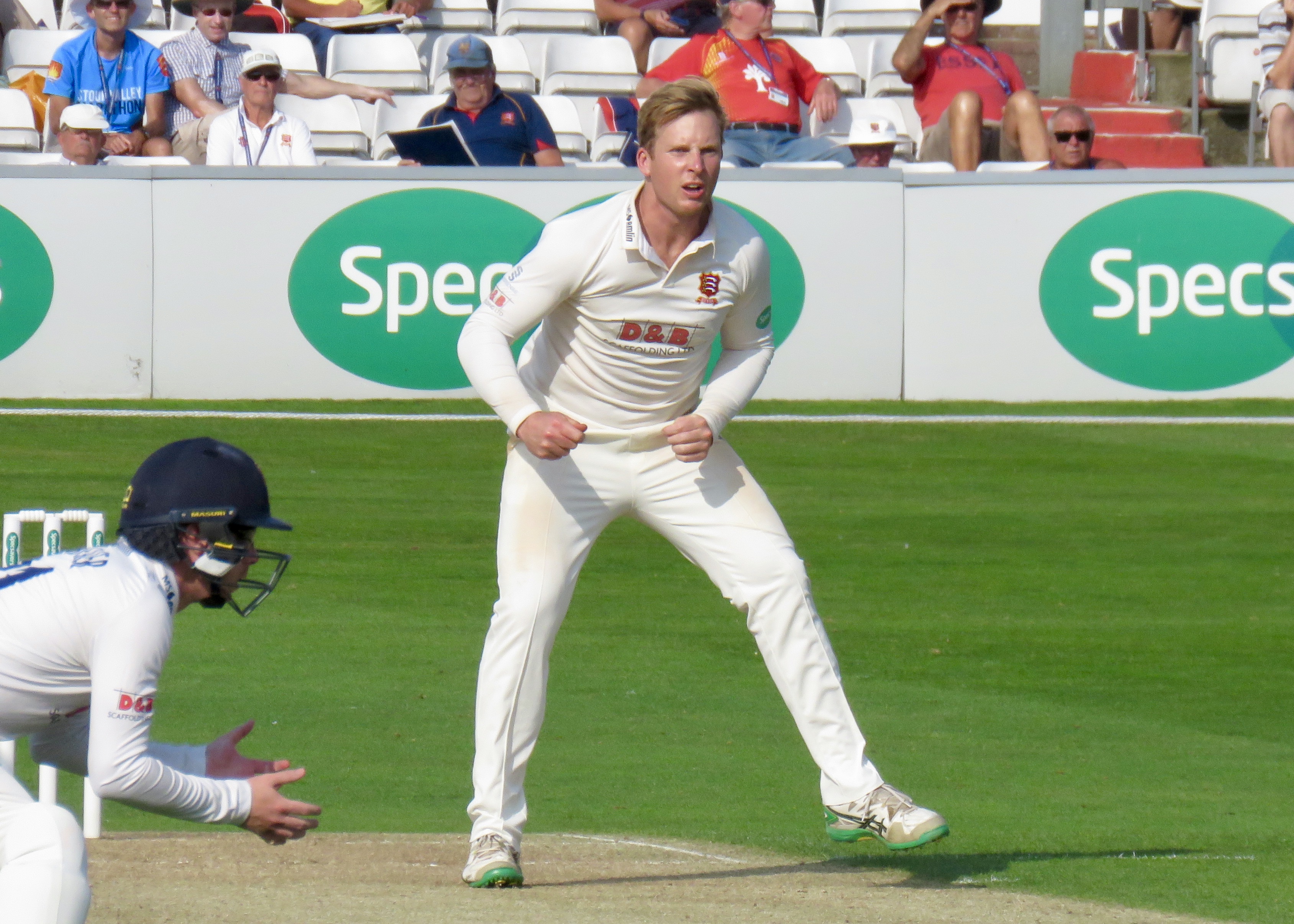 This is a simple one, 20 year old Mason Crane was hit for a couple of boundaries by the wonderful AB de Villiers, he took another swing and was caught on the boundary by Alex Hales!  Crane’s reaction was priceless and one of my absolute top moments of the summer. 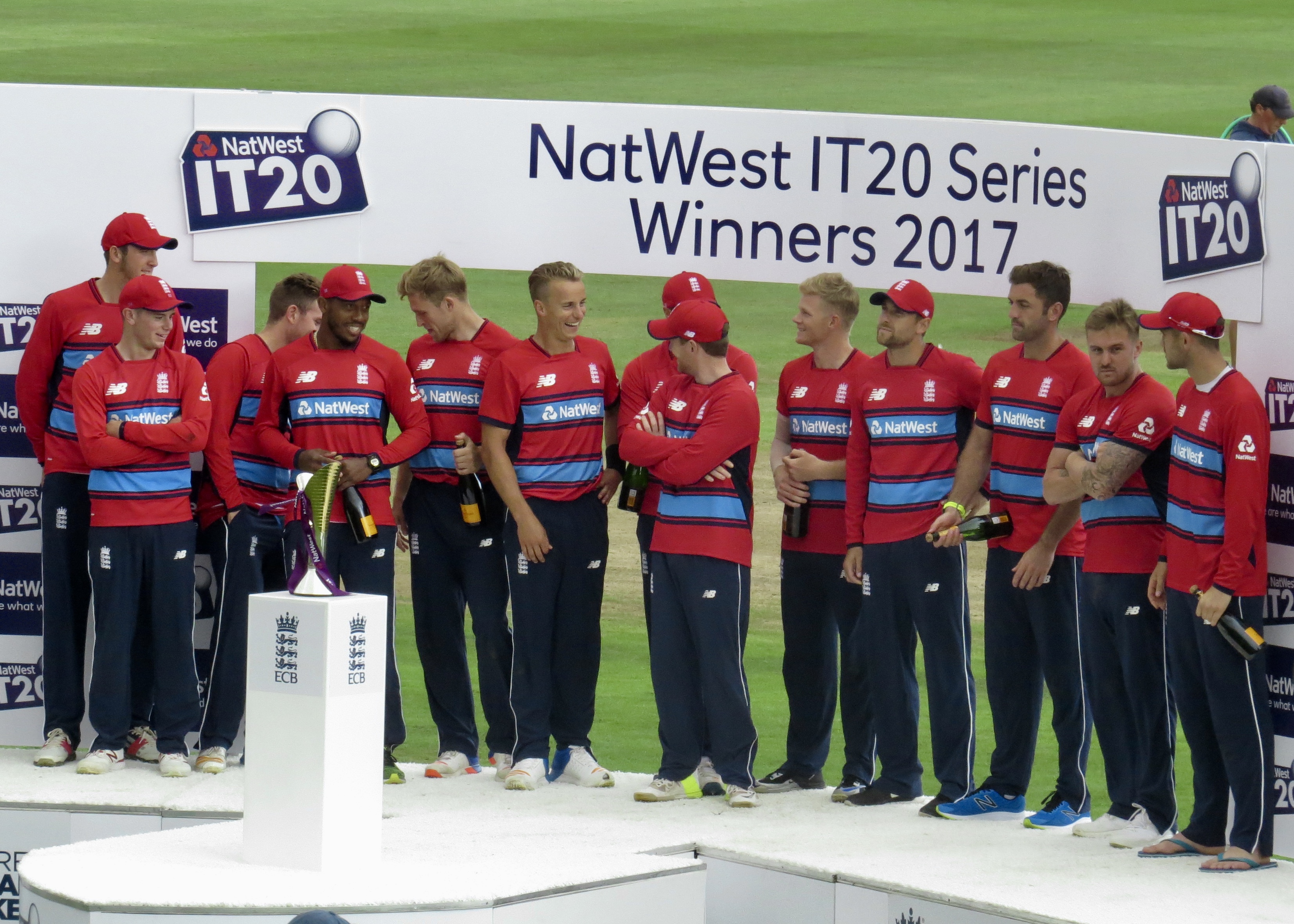 With the Champions Trophy taking place in England Test cricket started late for the summer, that meant Essex retained the services of Alastair Cook.  Essex batted second in this historic day/night, pink ball game and made 542 for 3.  Alastair Cook and Nick Browne broke the Essex record for the highest opening partnership making 373 before Cook was out for 193, Browne made a wonderful 221 before being out, Essex were 502 for 2 at this point. Varun Chopra was Not Out 100 before Essex declared to chase the win.

That win came courtesy of Simon Harmer to a large degree, he’d taken 5 for 77 in the first innings before obliterating Middlesex in their second, taking 9 for 95!  9 wickets in an innings!  Remarkable! 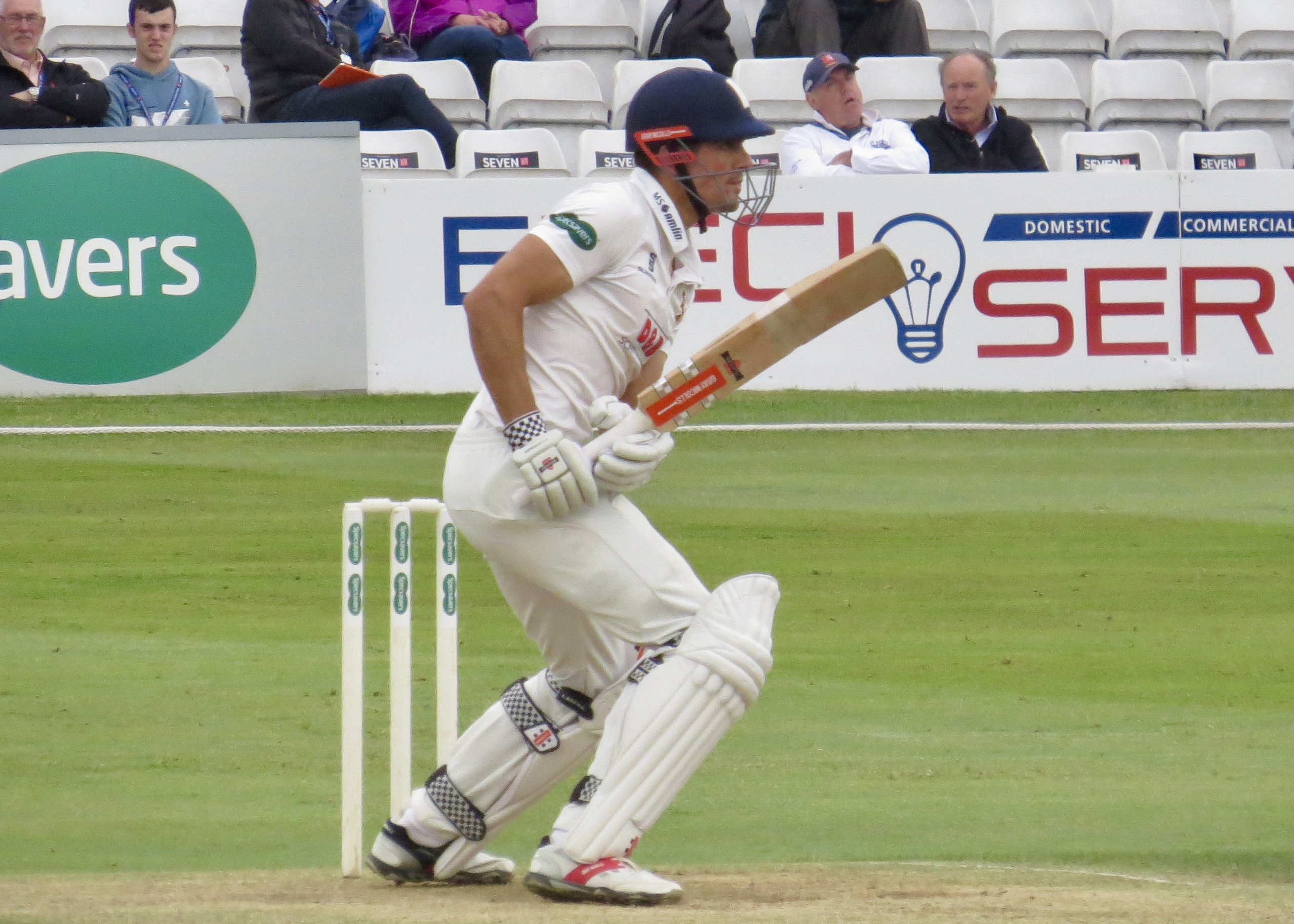 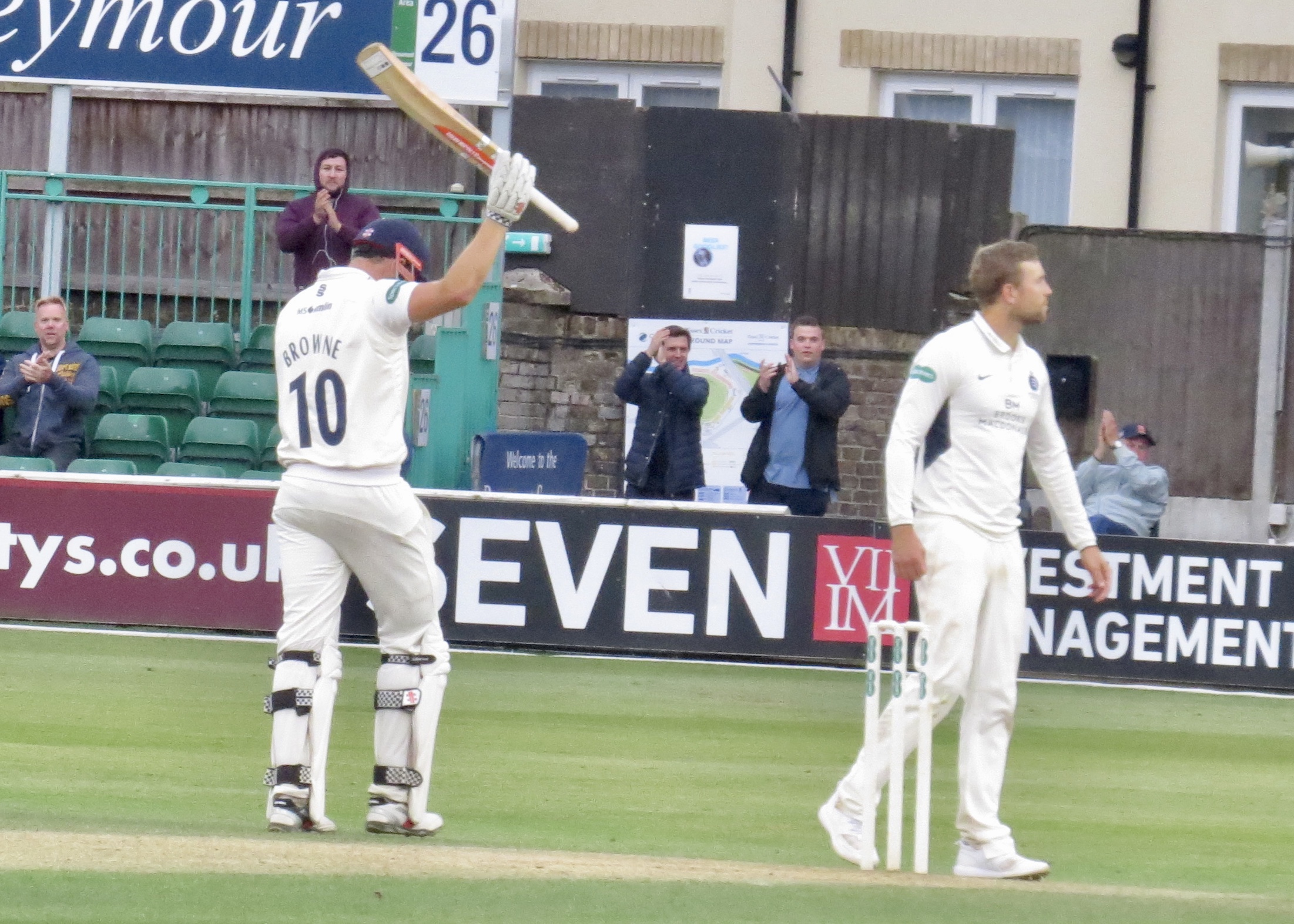