Rugby4All – What’s it all about?

I often receive emails from Premiership Rugby that leave me wanting to know more about some of the initiatives they’re involved in, at the moment I can’t always go along to learn more.  However an afternoon explaining the Rugby4All programme came during the school holidays, meaning I could make the trip to Trafalgar Square.   The fun and games took […]

I often receive emails from Premiership Rugby that leave me wanting to know more about some of the initiatives they’re involved in, at the moment I can’t always go along to learn more.  However an afternoon explaining the Rugby4All programme came during the school holidays, meaning I could make the trip to Trafalgar Square.

The fun and games took part in the Fan Zone in the shadows of the National Gallery, a spectacular setting, giving me the opportunity to take the odd photo that was non sports related. 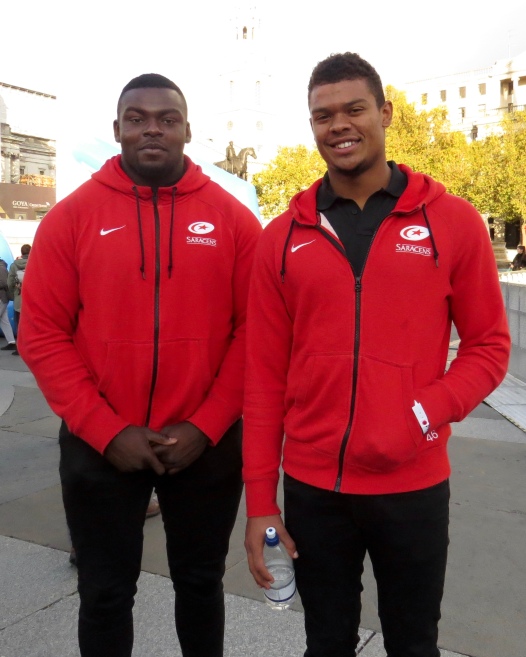 I was pleased to see 2 Saracens men Nathan Earle and Biyi Alo, at 21 they’ve both featured for the age groups for England and are making their way in the A league with Saracens.  Earle is a speedy winger and Alo a prop.  They were joined by Joe Marchant of Harlequins, he joined Quins as a Fly Half but has moved across to the Centres. 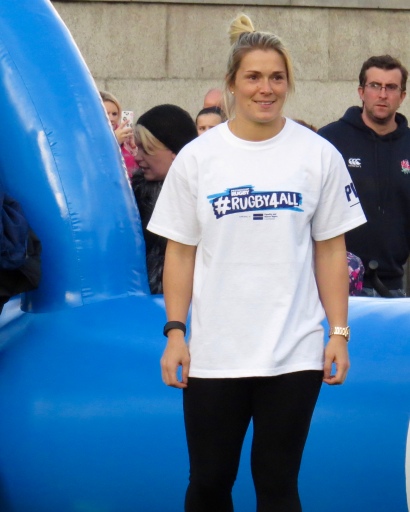 Those gathered were lucky enough to be able to meet a Rugby World Cup Winner – Rachael Burford, an Inside Centre was part of the England team who were victorious in 2014.  I’m looking forward to interviewing Rachael in January and finding out about her rugby career and her appointment as the first woman on the RPA Players Board. 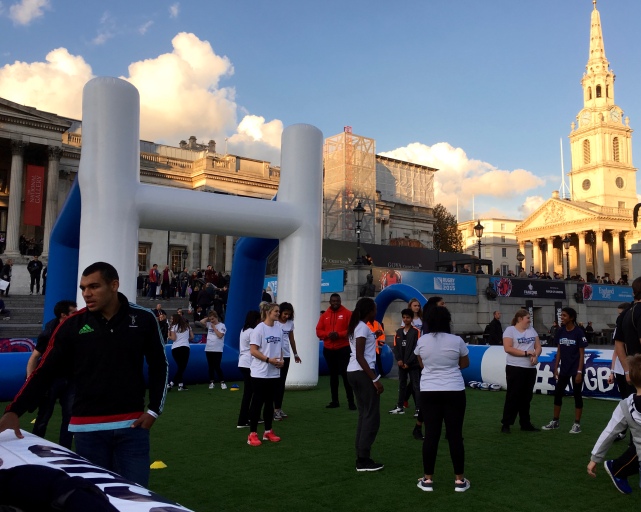 The aim of the afternoon was to publicise Rugby4All – I’m going to cheat and get the explanation in a nutshell from the Premiership Rugby website.

Rugby4All is Premiership Rugby’s innovative programme backed by Department of Culture, Media and Sport, in partnership with the Equality and Human Rights Commission (EHRC) to promote diversity and equality in rugby. The programme aims to increase the number of women and girls involved in the sport, to provide better access for disabled people and to promote the game among Black and Minority Ethnic (BME) groups.

When you’re a fan of a particular sport, in this case rugby union,  it can sometimes be hard to link that game with the huge benefits it can bring to all and sundry away from the high level, professional game we avidly watch on a regular basis. 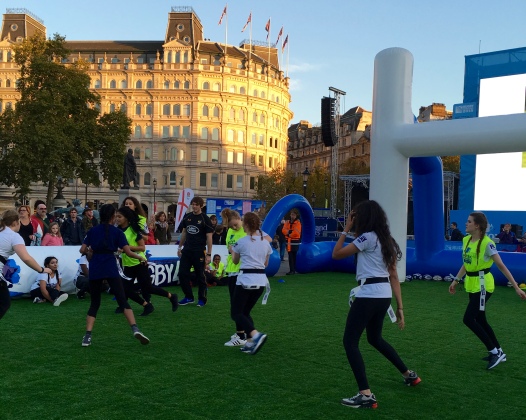 When push comes to shove rugby union is a form of exercise and a fun one at that!  A team of coaches from Wasps had brought along a group of teenage girls to model just what Rugby4All looks like.  In this case what it looked like was a group of carefree teenagers laughing and having fun, while getting exercise at the same time. 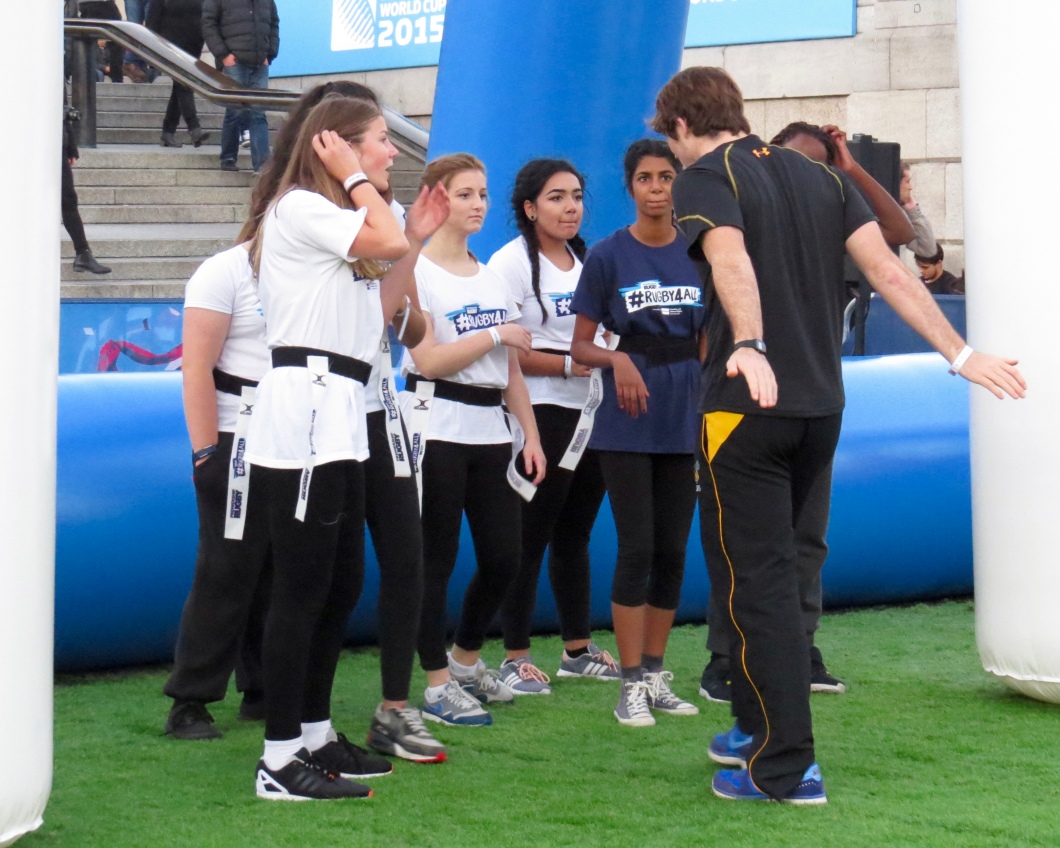 It was wonderful to see, teens can be incredibly self conscious and many girls in particular don’t buy into school sport.  Each and every one of these young women were fully engaged and keen to take part.  The coaches, along with the players present, encouraged young onlookers to take part in fun activities based around a rugby ball or 6. 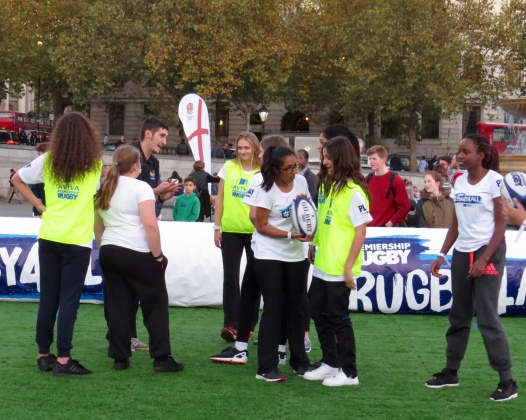 It was clear that this programme will  and has engaged many, all that participants need is enthusiasm and desire to have fun. As far as those who will facilitate Rugby4All, 480 female teachers and volunteers and 240 BME coaches  have been recruited and trained.

In common with the girls taking part in Trafalgar Square 7200 secondary school girls and 840 11-15 year olds have taken part in taster sessions, getting the chance to try out this game in appealing formats.

“Women’s rugby is at an all-time high right now following England’s World Cup win and this initiative from Premiership Rugby and the EHRC will build on that further encouraging more women and girls to get involved.” said the Minister for Sport.

Along with #ThisGirlCan this programme will show women and girls that they can look outside of the traditional sports on offer.  Personally I would have loved this as school!  As a vertically challenged (short) teenager I was rubbish at Netball, yet pretty good at throwing a rugby ball around with my brothers.

By targeting coaches in communities with a high level of BME it will show those living there that rugby can be for them too, that they can engage in all of the exercise benefits the programme brings. 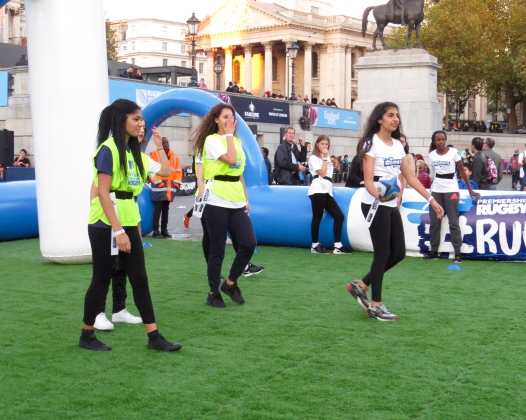