An opportunity to interview London Broncos Head Coach Joey Grima also gave me the chance to watch the team train.  Now that was something I just had to do – […]

An opportunity to interview London Broncos Head Coach Joey Grima also gave me the chance to watch the team train.  Now that was something I just had to do – I’ve supported this team since the advent of Superleague in 1996. 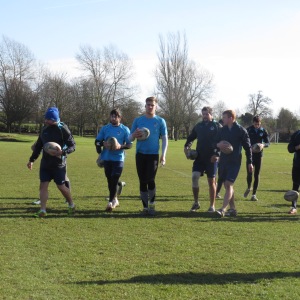 I found myself heading to Bushey – I knew that was in the general direction of Watford but of course my Satnav showed me the way.

It took a little over an hour with a whole chunk of M25 and a small section of M1 – no idiot driver incidents to report which makes a nice change.

I’m glad to say the majority of the people engaging in the chat condemned the incident – but a few denied the truth of the matter.  Having watched the video I hope the perpetrators are caught and dealt with by the law.

Having been to Paris 7 times in the last 2 years I can confirm that,  yes the Metro can be a squeeze, but by usual standards there was plenty of room for the man to get on.  A vile racist incident by total morons!

On to much nicer things – I arrived at the Broncos training ground in plenty of time.  I chatted to Joey for well over an hour and learnt lots not only about him, but also about the system in Australian Rugby League.  That interview will follow at InTheLoose.com

The players had arrived at the training ground at 8am that morning, the first job of the day was to look at the video of the game.  Their 1st opponents in a new era for Broncos in the Kingstone Press Championship were Doncaster. 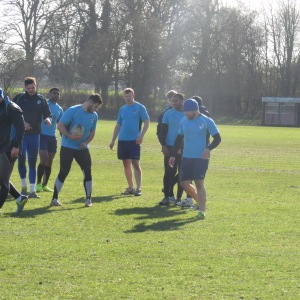 Broncos were leading 20 nil at half time with tries from Ray Nasso, Daniel Harrison and 2 from Rhys Williams, Wes Naiqama added 2 conversions.

That lead was extended to 26 nil as Naiqama scored and converted a 5th Broncos try.

Now I’m sure that everyone thought the win was a done deal, but Doncaster scored 3 tries in 11 minutes then another on 75 minutes!  That took the score to London Broncos 26 Doncaster 20 – and as a Broncos fan I’m very relieved to say that’s how it finished!

I imagine that video session was a very interesting one – it would’ve been intriguing to have been a fly on the wall.  Joey explained that his team had only completed 3 of out 10 sets in the 2nd half.

Rugby league’s a game of momentum and that statistic gives a very good understanding of how much ball Doncaster had in the 2nd half.

As a rule the next session will be out on the field working on those areas that need improvement.  as well as specific preparation for the next game.

It was a chilly morning so that session was swapped to the afternoon allowing the pitches to thaw.  When I arrived the players were working on strength and conditioning on a rota basis. 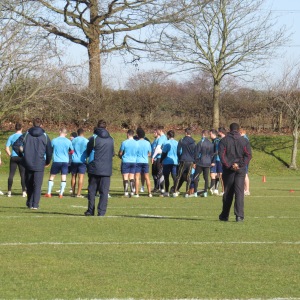 The gym in use at the moment isn’t big enough for the whole squad, I’d say those waiting were building team spirit.  There was lots of chat and lots of laughter. 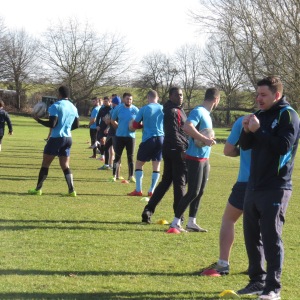 1pm approached and Joey and I put our interview on hold as everyone headed outside.  It was good to see Joe Mbu, London Skolars Coach, heading out – he has to be one of the most interesting men in the game – and I really must share the whys and wherefores in an interview later in the season. 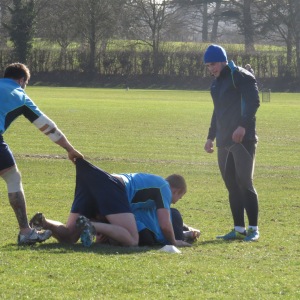 Joe attends the Broncos training sessions at least once a week to learn and watch – he did so in his quiet and considered manner.

We had a small chat towards the end of the session and I wondered if at times the role was like dealing with difficult teenagers.  He made me laugh when he said when he thought about things he realised what a pain he’d been at times as a player!

The training session was great to watch – it was, at times incredibly challenging – there was certainly no messing about going on.

Now a confession – one of my favourite players in the time I’ve been watching the game is playing at Broncos this season!  One Richie Mathers , I’m thrilled to say the least!  A player with a natural and inherent skill!

It was great to see how seriously both he and is team mates trained – as they were put through their paces by Joey and his right hand man Andrew Henderson.

That was after the strength and conditioning coaches Mike Eccles and Dan Mays had done their thing with the players.

A challenging session for all concerned carried on for round about 90 minutes, the majority of the players then headed for the changing rooms.  Leaving a few to work on skills specific to their positions.

Joey and I continued our conversation at the end of the session – he is in common with Schalk Brits of Saracens – Sunshine on Legs!  And was an absolute delight to talk to!

Richie Mathers joined us for a while and again was very interesting – I can feel another interview coming on!

The day had disappeared with no food consumed so a very sophisticated Harry Ramsden’s it was at the A1 services – ooh I know how to live!

My iTunes is still playing silly beggers so Spotify it was on the way home.  Song of the journey – Thinking About You – Calvin Harris feat Ayah Marar – what I would call a tune.  In fact I’d say it was my song of 2013 – a feel good, shoulder dancing song!