What chance that Sales Sharks would be playing at home on the weekend of the World Club Series – well I suppose a 1 in 2.  A much slimmer chance […]

What chance that Sales Sharks would be playing at home on the weekend of the World Club Series – well I suppose a 1 in 2.  A much slimmer chance that their opponents would be Saracens!  I couldn’t believe my luck when I saw that was the case, so promptly booked my ticket.

Having had a decent nights sleep at the Warrington Holiday Inn,  I did an unusual thing for me and had breakfast in the hotel.  I’d managed to miss out on food on the journey up and could see that with 2 games ahead of me the same might happen again.

A big, not too unhealthy breakfast for £8.75 kept me fuelled for most of the day – I did finish with Melon, I’m sure that wipes out the calories in the cooked breakfast! 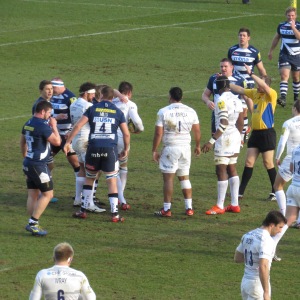 I hadn’t quite realised how ideally placed the hotel was for getting to Sale – a straight 20 minutes on the A57 and I was in the car park.  I’d pre-booked for £10. I did feel that was a little steep for a pot holed car park, but being close to the stadium was welcome particularly in the weather.

I’d bought a £25 ticket, then got an email, I think, offering access to the hospitality area with a great seat for only an additional £15.  I have to say that was a great offering, the weather was to say the least cold, it was good to be indoors before and after the game.

It also gave me the chance to chat to fellow Saracens fans Alison and her Silver Fox as her other half is known!  Which was lovely!

I’m not going to linger on the game – other than to say – Sale were very much the better team in the 1st half.  I will write a match report later in the week.

Sale had already claimed one big scalp at home, having beaten Northampton Saints. I was at the European game in December and felt they’d played a good game,  that proved that an in form Danny Cipriani is a joy to watch. 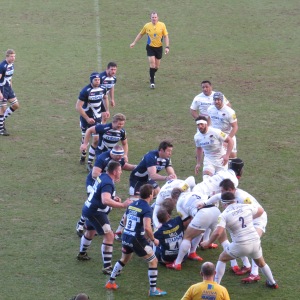 He was certainly in form for this first half – it seems to me that at times he can see a pass that others just can’t picture.  He has such quick hands, and it has to be said as long as his team mates are on the same sheet it works well for them.

Sale were leading 14 to 3 at half time with the final score being Sale Sharks 14 Saracens 10.  I could so go into the game more but I’ll save the detail. 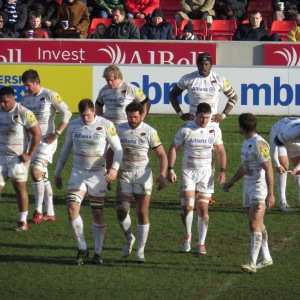 A hint may be that it wasn’t a terribly good day at the office for Saracens and the best team on the day were the victors.

I lingered in the hospitality suite for a while and had a chat to Chris Ashton – he’s issued a challenge to a fellow In The Loose person to attend a tackle session after a post that was slightly insulting was posted.  I was pleased he was smiling as we chatted and didn’t want to tackle me!

I was thrilled to turn round and see the gentleman in the photo below standing behind me.  I really do try not to be uncool these days – but given a chance to have a photo with Bill Beaumont I just had to!

The journey back to the hotel was a quick one again, I chose to have more food before I set off for Event 20, deciding filling up on chocolate and cake really isn’t a good idea!  Making sure I was dressed up for a chilly evening I headed to Wigan!