Having spent the morning at the side of a muddy pitch in Trinity College Dublin,  watching what really was a different form of rugby I headed for some warmth before […]

Having spent the morning at the side of a muddy pitch in Trinity College Dublin,  watching what really was a different form of rugby I headed for some warmth before heading off to Landsdowne Road to collect my ticket for the Ireland v England game.

As I drank a cuppa the snow came pouring down – or as someone has pointed out drifted or floated down.  It wasn’t looking delightful for the game ahead – chilly and wet!  Having had an interesting chat with Eoin Faherty Secretary of the Dail and Seanad Rugby Club he very kindly took me to find a taxi. 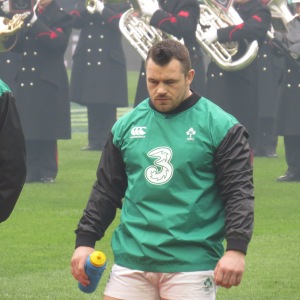 Dublin has a weird and wonderful one way system so it took us a while to get near the ground, plenty of time to talk, we discovered that we’d both lost a son to tragedy.  What chance I got into that particular taxi, I hoped our chat helped in even a small way.

15 Euros later we arrived near the ground, I set off to find my ticket.  A small mention of how I came by one of the hottest tickets in town.

I met one Louis Magee at the opening of London Irish’s new training ground, his Grandfather was 1st on the honours board and the club presented him with 2 special shirts.

It was confirmed just how lucky I was that this lovely man had helped me get a ticket when he was announced as the person being presented to the players!  I will always be very grateful! He is by the way President of the Irish Rugby Union.

I had no real concept of what the stadium would be like, I had seen it on the TV but until you’re in situ you can’t really have an idea. The atmosphere was quite muted throughout the game. But. at last I made both National Anthems and loved hearing the Irish sing live!

My seat was 8 rows from the front of the stand between the 22 and halfway, giving me a great view – although the seats were quite shallow if that makes sense?  It was a bit of a strain to see the other end of the ground.

The game was billed as the decider for the tournament, with both teams having won their 1st two games.  I’d thought all along that this wouldn’t be a year for a Grand Slam with the way the home games fell.

I’ll be honest and say I was pleasantly surprised when England won in Cardiff!  Someone was going to leave the Aviva with their win record broken. 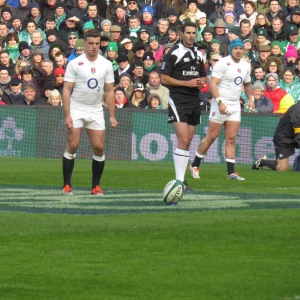 Ireland fielded a largely experienced team, in contrast England are a young and inexperienced set up.  Which would triumph on the day, tried and tested or fresh and new? 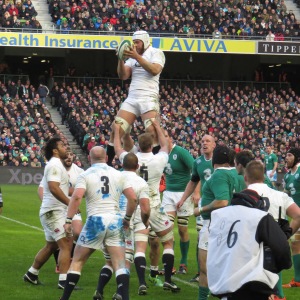 A quick mention of the game – Ireland played their strengths and England’s frailties.  They dominated in the loose yet didn’t totally dominate.  I would say that for a neutral the game may have been dull, with a solitary try.

England made far too many schoolboy errors, losing their own lineout on the Irish line, kicking straight to Simon Zebo time after time, being penalised in the ruck.  To a large degree Ireland fixed the errors, they didn’t allow their visitors to get into their game at any time.

In spite of a spell spent near the Irish line England didn’t look like scoring a try at any point for me. Both captains played their hearts out, I’m not too sure that Chris Robshaw is the best 7 in the country but he does seem to be growing as a captain. 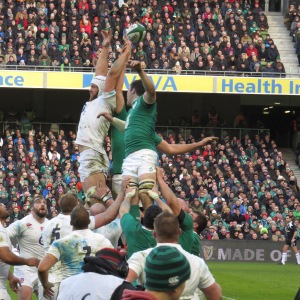 Ireland played the better game and were rewarded with the win, Robbie Henshaw, one of their young guns scoring the only try of the game.  The score was Ireland 19 England 9 – the scoreline tells the tale of a less than thrilling game.

Ireland move on to the Millennium Stadium next – if they win there they’ll be looking for a Grand Slam at Murrayfield.  If Wales win the tournament is wide open again!

I’d sat at the end of a row again and was barely disturbed during the game which was great; it was a shame that the 2 men sitting next to me didn’t want to engage in any manner.

I imagine they were of the same opinion as the drunk man I met at the airport who told me – a seat for a woman at an international rugby match was a wasted seat!  How strange that he did;t watch any club rugby yet I have 4 season tickets!

The ground was easy to get away from and apart from one very drunk man – whose son was beside himself angry with him – there weren’t loads of incapable people evident. That was another positive from my viewpoint. 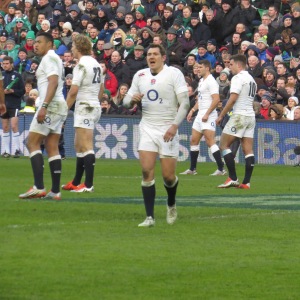 The lovely Joanne again came and picked me up, driving me to the airport.  She was a marvel over the weekend and goodness I need to repay her kindness. 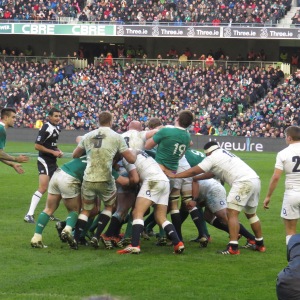 The whole check in thing at the airport was very smooth, the 90 minute delay for the flight not so great.  Ryanair may have improved and relaxed their bag horror situation their communication really hasn’t improved! The only saving grace was that this pilot had learnt to land smoothly which was a huge relief!

A few facts and figures – Although I seem to have lost my beer etc prices! 😦

It’s going to be interesting to compare seat prices at the end of the 6 Nations – so far I’ve had 3 seats in quite similar spots – for very different prices!

A short drive home saw me in bed at about midnight, after having a really wonderful weekend in Dublin!