Sandwiched between 2 Six Nations fixtures was a school rugby match.  My day job is as the Business Manager at Mayflower High School.  I try to watch as many rugby […]

Sandwiched between 2 Six Nations fixtures was a school rugby match.  My day job is as the Business Manager at Mayflower High School.  I try to watch as many rugby games as I can, one of the joys of working in a school.

However this particular age group – The U14’s I hadn’t managed to see this year, but I’d heard very good things about them.

Once I knew they were into the final of the Essex County Schools’ Rugby Union U14B Group Final, The Club Sports Shield 2014/2015, I mentally put the date in my diary.

That date was March 17th, it was a few days after I’d made the commitment to go that I realised, that’s my birthday! A sign that I was born a long time ago!

If you glimpse back through this blog you won’t be shocked that I stuck with my plans to go and watch rugby!

The game was to be played at Barking Rugby Club, a club with a long history having been founded in 1930.  The man with the most international caps at prop started his career at the club – one Jason Leonard.

I’d never been to the club before in spite of it being fairly near by; I left work early to make sure I arrived in plenty of time, it made for an easy journey as I beat the rush hour.

I went in to what was a decent club house and met Bill Coley, we’d communicated about me writing a match report, it was a pleasure to meet him.  An ex Deputy Head, he is an important cog in the wheel of Essex School Rugby.

Both teams were warming up when I went outside, Mayflower had 4 PE Teachers present, but it was team coach Mr Bunyan who was taking the lead; the boys looked well drilled and determined.

I told them it was my birthday and discovered I shared the day with Sam, playing in the centres, I said to him in particular – make this a special birthday!

Trinity had like Mayflower played well to get to the final, scoring many points on their way.  It seemed odd that they had just the 1 teacher with them, until we heard that the school had received a phone call from the big O (OfSTED) – I wish them well with that! 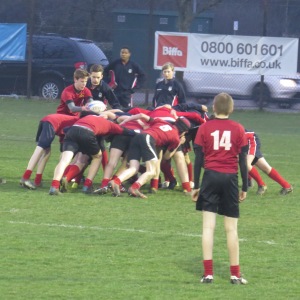 I’m hoping to write a match report so won’t ramble on too much about the game here.  The teams competed well in what was a low scoring 1st half.  It was good to see some of the technicalities of the game being carried out with such skill. 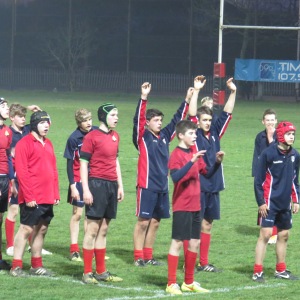 At one point Trinity were rolling their maul towards the Mayflower line, the defenders managed to hold them up and halt their progress. Cue a scrum put in for Mayflower.

Both teams were aware of what to do in the ruck, but on balance throughout the game Mayflower performed better in that area.

Sam scored a very well taken try for Mayflower putting them ahead before Matt kicked a penalty for Trinity.  He’d missed with his 1st attempt, but Mayflower had encroached and the kick was re-taken.  The teams went in at half time with the score on Mayflower 5 Trinity 3

Trinity went ahead early in the 2nd half as Matt kicked a 2nd penalty,  He has a very unusual kicked style, with the ball lying very flat, torpedo style.  An effective method for him however.

Mayflower piled on the pressure in the 2nd half, for good spells Trinity defended well; but, birthday boy Sam added a further 2 tries, Dan converted one of them to take the score to Mayflower 17 Trinity 6.

I was watching with a couple of colleagues who hadn’t watched rugby before – some of their reactions were really quite funny, but goodness they were very passionate about it all, a few sore throats in the morning I think!

A try felt inevitable for Trinity as winger Brian looked to be very fleet of foot, he had one chance but was just pushed into touch.  But another came in the final minute of the game, and the crowd saw just how fast Brian was as he ran in a great try!

Matt added the extras to take the final score to Mayflower 17 Trinity 13, and so the lads in red were victorious! 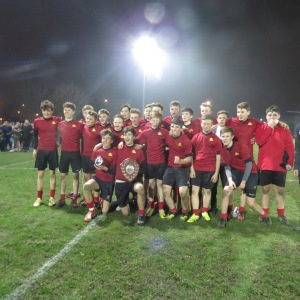 The crowd and of course the players were (where applicable) thrilled!  It’s a wonderful reward for the endless hours of work put in and patience shown over many years by Mr Bunyan!

The boys were treated to spaghetti bolognaise and garlic bread after the game – both teams looking very smart – and very tired!  There were big smiles all round for the winning team and both teams were clapped into the club house which was great to see.

After a warming cuppa I made my way home – buying a ‘celebration’ McDonalds for my son Jake and I (we both had chicken!).  What better way to spend my birthday!

Next up a rather larger stadium – Murrayfield!