Having thoroughly enjoyed 2 days of cricket Good Friday brought a local derby between London Skolars and Hemel Stags. The weather was back to yuk having had a touch of […]

The weather was back to yuk having had a touch of Spring; Skolars are my closest rugby team round about 45 minutes away with a good run.

Luckily most of the traffic was heading North on the A12 – it meant my journey was a good one, I’d left home a little later than planned but arrived with 25 minutes to spare. 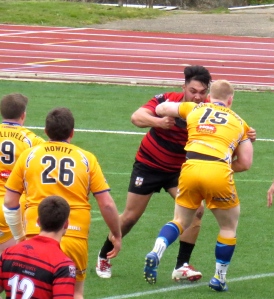 The New River Stadium facilities are still ‘under’ construction – which means no indoor facilities on the site of the ground.  I used the ladies toilet when I arrived – then made sure I didn’t drink too much! 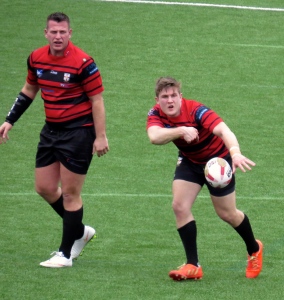 With no way to get into the seats from inside the entrance is from the front – for some strange reason loads of non-playing players were lining up just inside – it felt like a guard of honour! 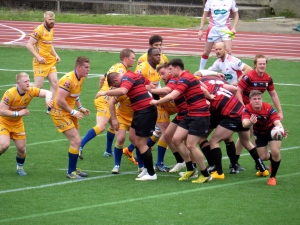 The club are managing to lay on keg beer – I must ask the price next time!  And a few soft drinks – but still no hot drinks which is my preference. 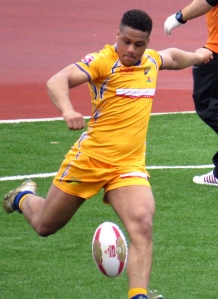 Skolars v Stags games tend to be lively affairs, this first Kingstone Press League 1 game of the season saw Jermaine Coleman, previously Assistant Coach at Hemel, taking his new role of Head Coach at Skolars.  I wondered if that fact would give extra bite. 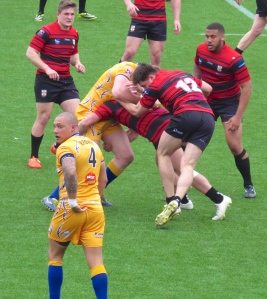 I really won’t go into the game too much here as I’m going to write a match report for In The Loose – but a quick summary.

The last game I saw Skolars play they lost by a mere 82 points – I was hoping for something different for this game.  Although I was fairly ambivalent about the result – I have a season ticket for both teams. But I’d decided I’d support the home team when they play each other. 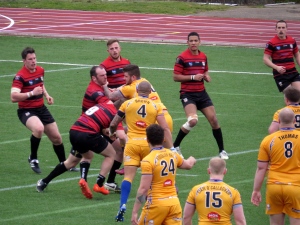 The game was fairly even for the first quarter, but Stags looked the more cohesive team throughout.

One feature was the number of spilled balls – both teams lost possession and territory time and again.

The teams went in at half time with the scores on Skolars 6 Stags 12 leaving the 2nd 40 with everything to play for. 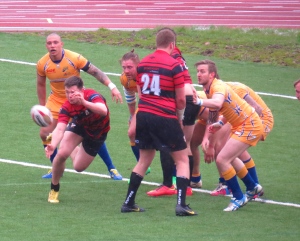 Hemel Stags were clear winners of the 2nd half adding a further 4 tries to the 2 they scored in the 1st half.  Skolars scored a 2nd try.

The final result was London Skolars 12 Hemel Stags 34 – It has to be said a couple of the Stags 4 pointers were shout out loud exciting!  Things look bright for them. 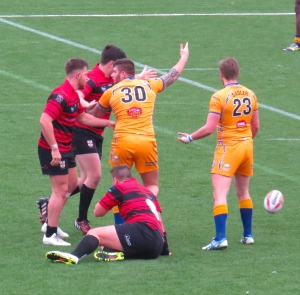 As far as Skolars are concerned this was a much better showing – they played with spirit, hopefully we won’t be seeing any more 84 point losses.

As far as I know there isn’t an option to stay on after the game – which is a shame it;s always nice to chat about the game.  So a prompt exit to head home. 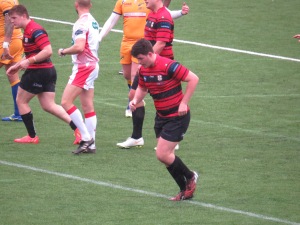 A couple of ‘stats’ 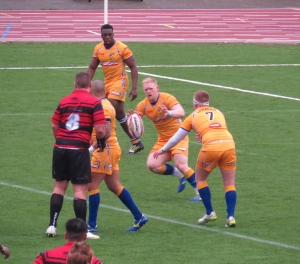 The journey home was in pouring rain but a good one – oh and there was still glass on the M25!

PS, an update! James Welham tells me the Real Ale was £3 a pint! Good value if you like that sort of thing! 😃