Having been to Milton Keynes my next date was in Coventry at the Ricoh Arena – home of Wasps Rugby.  I was lucky enough to be stay the night with […]

Having been to Milton Keynes my next date was in Coventry at the Ricoh Arena – home of Wasps Rugby.  I was lucky enough to be stay the night with my lovely Saracens friends Steve and Clare.

We had a great evening – I’m not too sure who was more shocked that I drank wine, me or them! And I woke up with no headache either! 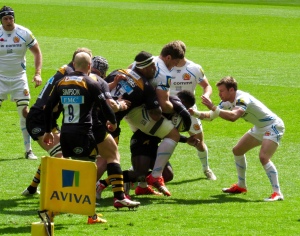 We had a great home cooked meal, (by Chef Steve) listened to some great 70’s/80’s music – much as I love modern music I reminded myself just how much I loved that era too! 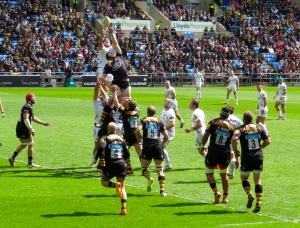 I was awake at stupid o’clock for a Sunday and had my usual spell of time wasting on social media – I can make hours disappear literally!  Before a shower and breakfast, very nice it was too – I made the schoolgirl error of having 2 big cups of tea – not a plan when you have a long ish journey!

Now, I was going to the Ricoh Arena to watch a great game of rugby (I hoped) but also to reclaim my Teddy Bear. 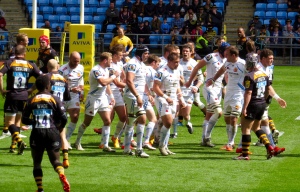 That’s a story I probably need to explain, ok, putting this out there………  I sleep with a bear!  I cuddle it/him all night.  I stay in hotels quite often when gallivanting watching sport – I decided that a pillow was no substitute for said bear. 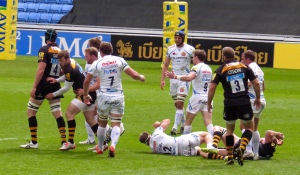 So, on the basis that I have no shame I decided he’d have to come with me and so that happened; all was good until I stayed in the hotel in the Ricoh Arena for the Leinster game and on leaving promptly walked out of the room and left him there!

I sent a funny Tweet saying how devastated I was (I wasn’t really, honest!) – the theme was picked up about 4 weeks after when the bear was retrieved! And a series of very clever and very funny tweets were exchanged with the bear at the centre.

And so I was invited to go and be reunited with my scruffy Harrods bear – I was able to invite a friend Rami – who’s caught the rugby bug in a big way this season, which was good, always nice to have company.  He’d taken himself off to Marseilles to watch Toulon v Leinster last week – the habit is certainly building!

I drove to the station to pick Rami up, Coventry is a bit confusing to navigate – but I made it in good time.  I’d booked parking for £5.00 – that was quite easy to get to and just a short walk to the stadium.  And thank goodness there was a club house and a toilet!!  All that tea! 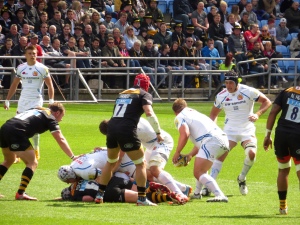 I would have one small criticism of the set up at the Ricoh – we arrived at a different angle (so to speak) and had no idea where to go to find the ticket office.  I’d say that a volunteer or steward ought to have been in position or at the very least the signage needs to be improved.

We met Joe from Wasps who came with tickets in hand – but no bear!  Oh no, he was to come back to me a little later.

The game on offer was a really key one as far as the Top 4 was concerned – with 5th playing 6th and a very squashed league above them.

Exeter are a big strong team with a few notable players in their ranks – Henry Slade who is being talked of as a possible England player, Jack Nowell current winger for England (what is that hair about??) and Thomas Waldrom – a superb No 8 – who I must say defies his shape and size.  He’s an incredibly dynamic and skilful player.

Wasps have an array of stars themselves – with James Haskell, Nathan Hughes and the very recognisable Ashley Johnson amongst others in the forwards.  Andy Goode (another what’s that hair all about!) Elliot Daly, Christian Wade and one of my favourite players Joe Simpson amongst the backs.

With 2 line ups with so many star players on show and so much to play for,  we were promised a good game.  And the 2 teams didn’t disappoint.  It was an afternoon for shout out loud exciting rugby!

Wasps were first on the scoresheet after a Nathan Hughes showed why he’s so important to his team when he found space and popped the ball out to speedster Christian Wade on the wing, with one hand of course! Goode added the extras this was all in the 1st minute! 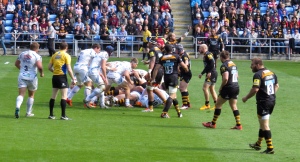 Will Crudely scored a mere 3 minutes later for Chiefs, Henry Slade took the scores to 7 apiece.  The teams then traded penalties with both Goode and  Slade scoring 3 each. 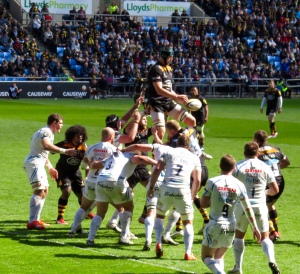 Wasps had a long range effort early in the half, Elliot Daly, he of the big boot stepped up  and kicked an almighty penalty!  One of the best kicks I’ve seen this season.

Thomas Waldrom was a very unlucky man on 36 minutes as he went for an interception and did that deliberate knock on thing instead!  A really harsh, yet inevitable yellow card followed. 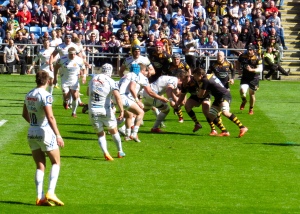 Wasps were able to take advantage of the extra man when they were awarded firstly the scrum then a penalty try as half time approached.  They went in at half time on 26 – Chiefs on 16.  It took a while to really clock that Nowell was playing Outside Centre, a position that really suited him I thought – he has a build that’s reminiscent of Manu Tuiliagi I’d say.

Goode stretched that lead with a penalty on 29 minutes before Waldrom turned from Sinner to Saint as he scored a deserved try for Chiefs; they’d really lifted their game after half time, they looked like a team fighting for a top 4 spot.  Slade converted the try and added a penalty.

The highlight of the game was a superb solo effort by Joe Simpson who seemed to burst from nowhere to run half the length of the field and score a wonderful try!  I was too busy jumping up and down in excitement to take a photo!  Schoolgirl error as it was very near! Goode added the extras.

Chiefs managed to claw themselves back to a losing bonus point score with a drop goal by Gareth Steenson on as a replacement, he’d missed a penalty having been on the pitch for only a minute.  That replacement on 77 minutes could have been a very bad decision but the drop goal put that right.

The game finished on Wasps 36 Exeter Chiefs 29 – Leaving all to play for with 2 weeks to go! 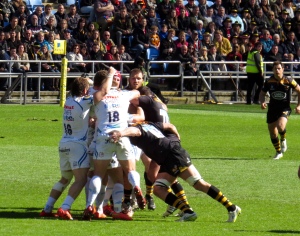 More of a match report style blog than usual – but it was a game worth writing about!  As for the bear?  I went onto the pitch at half time to be presented with him!  A very funny moment……. and, another secret, I’ve slept much better with him home!  How sad am I? 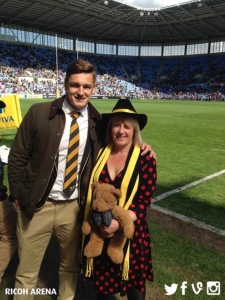 As well as the ‘official photo with Sam Jones taken at half time, I also couldn’t resist being a fan after the game – the photo thing just has to be done at times.  I had a good chat with Sam and look forward to learning more about him both as a rugby player and a writer! 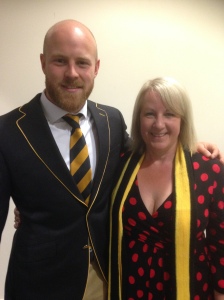 No facts and figures this time round – it wasn’t that sort of afternoon, but I’ll be back for the visit of Leicester Tigers so some facts that time round.