My 3rd game of the weekend was at Allianz Park – Saracens v Exeter Chiefs.  A leisurely breakfast in bed and I set off.  It turned out my hotel was […]

My 3rd game of the weekend was at Allianz Park – Saracens v Exeter Chiefs.  A leisurely breakfast in bed and I set off.  It turned out my hotel was very well placed for Allianz Park, the journey took me around 35 minutes.

I had to be at the ground for 1ish to meet a group from the school I work at – the lads had won a cup, progressing further than any other team in recent history, so we sorted them a trip to Allianz Park as a reward.

I had time to meet my friend Tracey for a – Hot Chocolate – of course!  And cake, before we caught the shuttle bus to the ground. 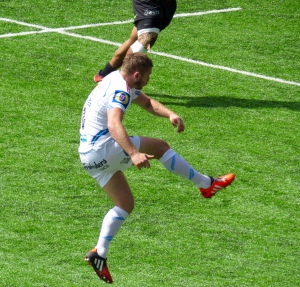 I’m sure I’ve said it before but the Pioneers – a large group of volunteers – are exceptional!  No matter what the weather they’re out and about, directing people and always greeting with a big smile.

I’d had a great weekend as far as meeting fans was concerned and it really was topped off by the always fun, Exeter Chiefs fans!  We walked past Stuey and the spectacular Colin (yes that headdress really is spectacular Colin!)  and I couldn’t resist asking for  a photo, they duly obliged.

A little later we met more lovely ‘Chiefs’ several of whom I’ve chatted to on Twitter for quite a while!  It was lovely to meet Lexi and Lucy in particular and see the 2 sets of fans happily mingling.

A quick chat to the boys from school and it was time to take to my seat, I’d seen 2 away wins and as a Saracens fan I was hoping it wouldn’t be a 3rd.

Exeter Chiefs have grown stronger every year, this 2014/15 season has been a great one for them.  They contested the LV Cup Final, losing narrowly to their hosts for the day, Saracens.  Amongst other victories they were also responsible for 2 of Northampton Saints losses!

Saracens had won the aforementioned LV Cup, The A League Final and their female counterparts topped the Premiership Table being crowned Champions. 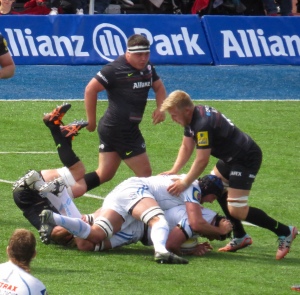 The end to the 13/14 season will have been traumatic for Saracens, making and losing 2 finals takes some getting over. 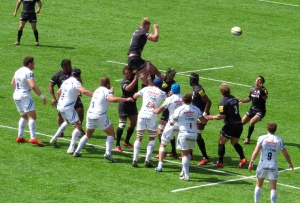 As with the other games I’d watched this game help a place in the Top 4 for the winner, could the visitors, who have been at times a bogey team for Saracens pull themselves back into the Top 4, leapfrogging Saracens?

It felt lie Saracens were going to be camped in their own half as the game started, they struggled to get themselves physically into the Chiefs territory.  Gareth Steenson starting at 10, with Henry Slade at Outside Centre, kicked a penalty after 6 minutes, reward for the pressure his team had applied.

Totally against the run of play Saracens surged forward in an entertaining move, Chris Ashton scoring, Charlie Hodgson converted the try to put the home team ahead by 4.

Chiefs have a big strong, capable pack, it includes 2 of the nominees for the Premiership Forward of the Year – Dave Ewers and Thomas Waldrom – it felt clear that they would trouble Saracens.

And so it proved when, after several phases of play, Luke Cowan-Dickie (Another whose hair I have to say, just why??  About) scored what seemed to be an inevitable try.  Steenson converted putting Chiefs ahead again.

That lead lasted all of 1 minute before Chris Wyles scored another entreating try – no matter where this man is played he excels!  Hodgson added the extras, giving a 4 point lead to Saracens. 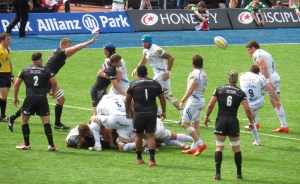 Exeter Chiefs were dominating in the ruck, and there next score was to be another drive over the line, this time by Thomas Waldrom – giving him an amazing 15 tries for the season!  Steenson converted – Chiefs ahead by 3!

Inevitably Saracens were awarded a penalty on the stroke of half time, the conversion by Hodgson meant the teams went in at half time on 17 apiece.

We were treated to a dance group at half time and a comedy race between Sarrie the Camel and some very funny Minions – well, I say race, more of a crawl!  They really are funny little things – I must watch a film! 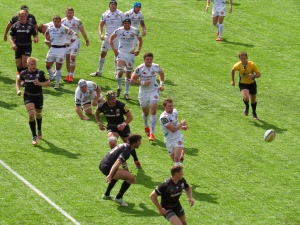 The second half wasn’t the most entertaining – Saracens seemed out of sorts – they squandered several clear scoring opportunities, passing poorly and eschewing overlaps at least twice. 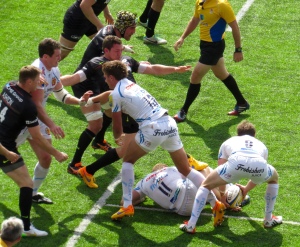 Charlie Hodgson gave the lead back to Saracens with a penalty on 53 minutes, it was then to be another 17 minutes before a point was scored again. 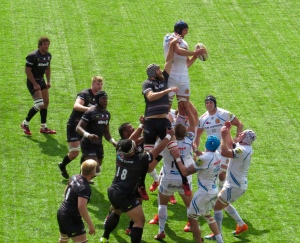 That score went to Exeter Chiefs – another strong forwards display – they drove towards the line, the inevitable try was scored by none other than Waldrom – 16 for the season so far, taking him level with the previous best by a forward – Neil Back.

Steenson cooly converted – at times even the simplest kick can go awry under such circumstances.  Owen Farrell on as substitute had missed a penalty earlier in the half.

The final whistle went seeing Exeter Chiefs take the victory – the score finished on Saracens 20 Chiefs 24.  It was a deserved victory for the visitors.

I do have to give mention to several of my fellow Saracens fans who sit behind me week after week – goodness they drove me and several of my neighbours crazy throughout the whole game!  Saracens really weren’t in the best form, but Chiefs played well and to their strengths.

These ‘fans’ moaned, very loudly the whole way through the game!  One such moan was about the referee checking a clash Maro Itoje had with a much smaller Chief – that’s what the TMO is for – had the meeting been the other way round we would have wanted it checked!  As it went the challenge was legal and fine!

Just sometimes it’s possible that the visiting team play to their strengths, have a better game and deserve to win.  It doesn’t mean calling your own players rubbish at the top of your voice!  Moan over (no driving rant, I have to rant somewhere!)

The win for Chiefs saw them leapfrog over Saracens into 4th place, they face Sale Sharks at home, Saracens travel to London Welsh.  what chance two 5 point wins? 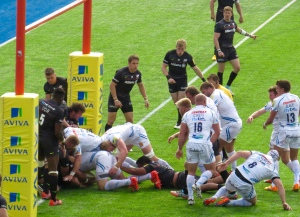 A quick meet up with the lads for some photos before they headed home on the coach, then a detour on the pitch to meet up with what’s turning into a great group of friends.  We’ll all be descending on Oxford next weekend.

The Chiefs fans were to a man/woman lovely, a trip South is a must for next season – everyone  I spoke to had found their welcome warm and had enjoyed the day, which was good to hear after the silliness of the ‘Fat Lady’ singing last season!

More than a  few enjoyed Wolf Pack Lager – Chris Wyles and Alistair Hargreaves venture – I hope to interview one or both of them about how it’s all going soon.

And so we come down to the final weekend – Northampton Saints and Bath have finished 1st and 2nd – so a home semi final assured.  2 from 3 can make the Top 4 – Tigers, Chiefs and Saracens!  What a wonderful situation after 21 rounds!

No facts and figures for this one – but loads to come from the Kassam Stadium next week!