Friday night means T20 Blast!  I really didn’t engage my brain when I wrote the Surrey v Essex fixture in my diary.  For some stupid reason I interpreted the match […]

Friday night means T20 Blast!  I really didn’t engage my brain when I wrote the Surrey v Essex fixture in my diary.  For some stupid reason I interpreted the match as a Royal London day time fixture, when I paid £99 for a Take That ticket! 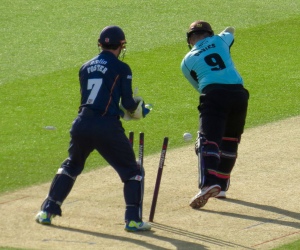 Naturally when it came down to making a choice between cricket and music the cricket won, a solo ticket is always difficult to sell on, and so £99 was wasted! 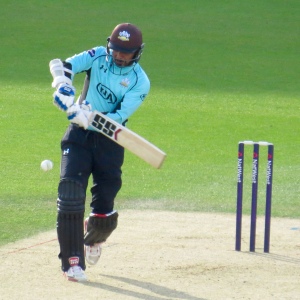 But, on a glorious evening I saw a great game of T20 cricket so have no regrets about my choice at all!

Having been at the Ravi Bopara Benefit match the night before my morning was spent messing about with photos and writing Event 72 up – so much better than housework! 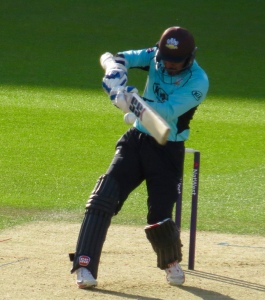 A quick dog walk and I was off – leaving a very sulky Shirley behind me!  Shenfield is my station of choice as it starts the Oyster journey and is an easy place to start. 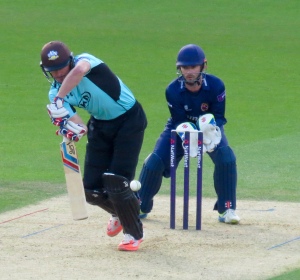 I was travelling with my friends Tina and Stella but we missed each other at Shenfield so met up at Stratford.  We took my preferred option of the Jubilee line to Waterloo followed by a walk along the South Bank, I’m not sure my friends were pleased with me! 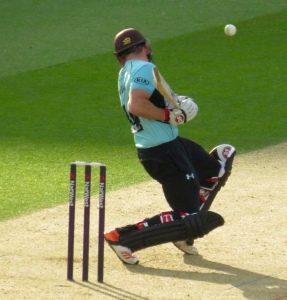 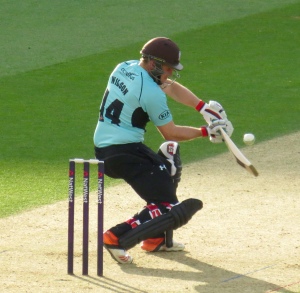 I somehow manage to get my meals all wrong on a Friday, so went into the cafe in the pavilion when we arrived.  A very nice chicken and bacon roll for a fairly hefty £7.10, which all the same  went down very well.

I will confess to being starstruck when it comes to being in the pavilion at The Oval – only my 2nd visit as a member, yet I can’t see that feeling changing. 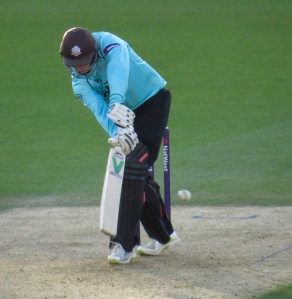 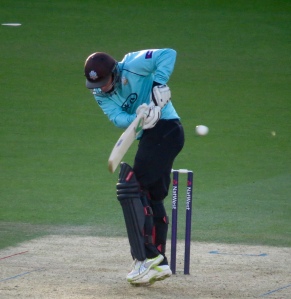 I was at this game however as an Essex fan, not a problem as we’re talking cricket of course.  I managed to find the snazzy seats on the 2nd tier again,  padded seats and an amazing view – literally pinching myself with it all!

There was a good crowd – Essex man seems to like the Friday night in London – they travel in numbers.

Surrey won the toss and decided to bat, I never quite know what’s behind the decision when it comes to T20 – I wonder if the noise levels later on had something to do with this choice.

The decision may have been regretted when Surrey found themselves on 1 for 1 after Steve Davies was walking back to the pavilion with a Golden Duck to his name – bowled by opening bowler Tom Westley!

Opening Batsman to Opening Bowler worked!  The mighty Kumar Sangakkara joined Jason Roy in the middle, but Roy didn’t linger.  He was out with the score on 21 – caught by Alistair Cook (always a pleasure to see him in an Essex shirt) from the bowling of David Masters. 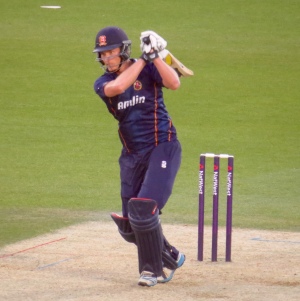 Moises Henriques was next up and he and Sangakkara got a partnership going.  How lucky those who were at Ravi Bopara’s benefit game were (me included) to see such a legend bat 2 nights in a row!  A total thrill!

Henriques put on a tidy 22 including 2 sixes before he was bowled by Bopara. 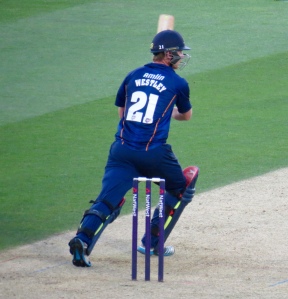 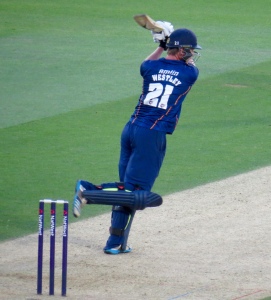 Gary Wilson made the long walk to the centre but was quickly walking back with his own duck – after facing 5 balls – at least not a golden one!  He was out after a great catch by Graham Napier – bowler, Shaun Tait.

Azhar Mahmood was next up – he made an entertaining 20 with 3 fours to his name. Sangakkara was of course toiling away at the other end.   However he was next to be out; with 58 runs to his name – including 8 fours and a six. 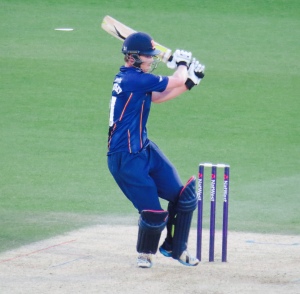 Sangakkara was out to another good catch – this time by Ryan ten Doeschate from the bowling of Tom Westley. 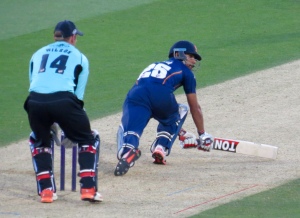 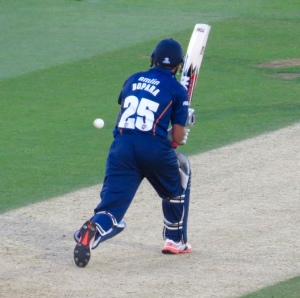 Mahmood was bowled by Bopara a mere 8 runs later,  now I take lots of photos at cricket – did I get these stumps flying?  Did I heck!  Typical! 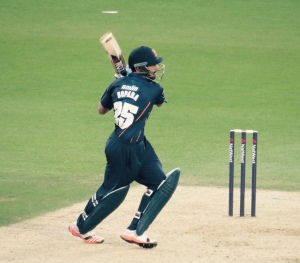 Zafar Ansari and James Burke were at the crease – Burke’s visit was to be a short one, 5 balls and 3 runs before Tait bowled him.  (missed by me again!) 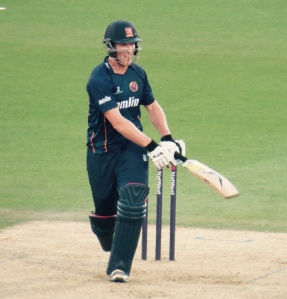 Gareth Batty joined Ansari who scored a decent 39 runs, with 2 fours and 4 sixes he was not out.  Batty was caught by ten Doeschate on the last ball of the 20 overs, giving Bopara his 3rd wicket. 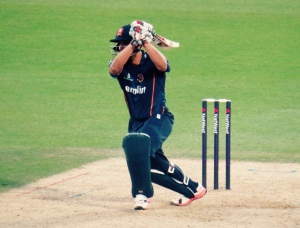 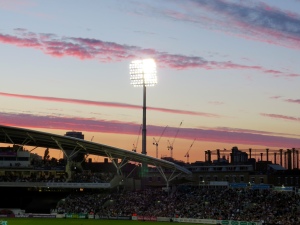 All of that added up to a less than huge score for Surrey – 169 for 8 in their 20 overs. However, T20 hasn’t been good for the visitors this year so far, that was still a chase for Essex.

Jesse Ryder and Alistair Cook opened the batting they’d started together for the benefit match, with Ryder hitting a very quick 50.  That wasn’t to be repeated as he was clean bowled by Matt Dunn!  5 balls faced – 1 four, 1 six and therefore a single.  One big hitter gone.

Tom Westley joined Cook at the crease; Cook had scored steady runs the night before but he was walking back after scoring only 8 runs, caught by Tom Curran, with Dunn being the ecstatic bowler again. 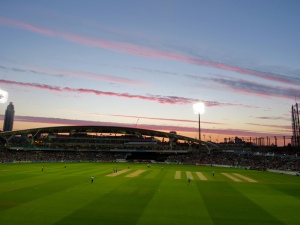 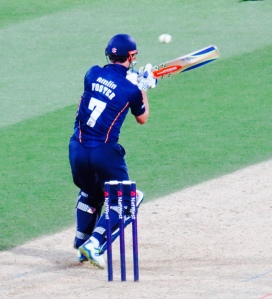 In came Ravi Bopara – along with Westley he played a patient innings, taking Essex to 139 before Westley was bowled by Matt Dunn, out for 55 with 7 fours and a six to his name.

They ran well between the wickets, taking a few chances, but patiently wracking up the runs.  Bopara followed Westley fairly promptly caught by Sangakkara from the bowling of Henriques – he’d scored 57 with 5 fours included.

One comment on the whole Friday night T20 thing at The Oval; I was disappointed that they chose to make a whole lot of noise as Essex were batting.  Gamesmanship?  I’d say so, they didn’t do the same when Surrey were batting.

A little rant about the T20 atmosphere, I actually hate it when the crowd are more interested in a ‘beer snake’ than, what was an exciting game, going on!  The Oval Squirrel on the other hand was, although clearly petrified, fascinating, poor little thing! 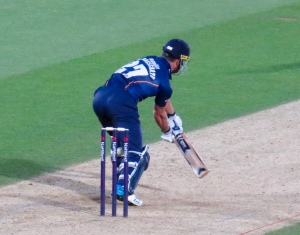 James Foster and Ryan ten Doeschate were left to finish the job in hand and they did so, but with a mere 4 balls remaining,  ten Doeschate scored 13 and Foster 18.  The Essex fans left the ground happy people!

However I suspect many were quite fed up before they actually made it back to Essex, thanks to horror trains.  I was really lucky and not too late back.  Another cracking evening!

A lot of photos above, not all spaced well,  I notice when I look through the hundreds of photos I take at the cricket how very physical the game actually is!