I have to confess to delaying writing this particular ‘event’ up for some strange reason.  I am inclined not to write any words and just post lots of photos.  But, […]

I have to confess to delaying writing this particular ‘event’ up for some strange reason.  I am inclined not to write any words and just post lots of photos.  But, that’s not my way so here we go. 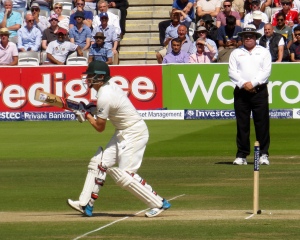 Lords – the Home of Cricket – is the one ground I had no control over when it came to which day/days I attended the test match.  It’s all about the ballot and my pot luck gave me Day 4. 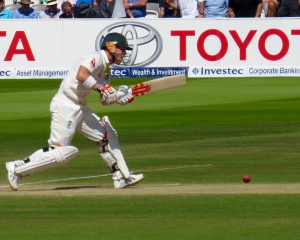 Before the Ashes started I told myself I wanted to be at every venue and that I might have to accept seeing great cricket played by the Australians rather than England. 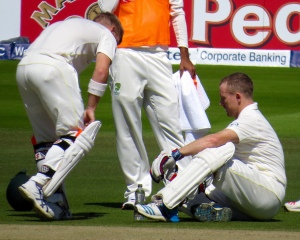 I was slightly worried to have 3 Day 4’s amongst my 12 after the horror that was the Ashes Down Under.  However the cricket played against New Zealand and a wonderful win in Cardiff saw me add Day 5 to my haul. 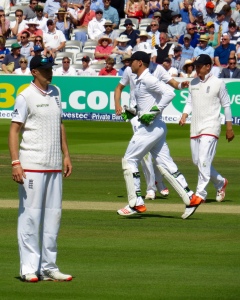 Clearly I was hopeful!  Michael Clarke won the toss, apparently deciding to change his standard call of tails, that saw the Australians go in to bat. 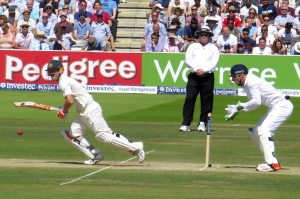 To say they made the most of things would be a total understatement – batting on what was purportedly a flat wicket they amassed a huge 566 for 8 declared. 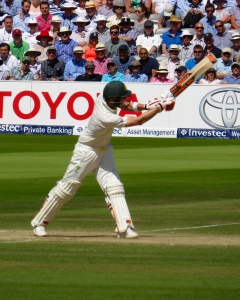 David Warner opening with Chris Rogers fell early to Moeen Ali with Jimmy Anderson catching him.  And so Steve Smith arrived he’d been temporarily knocked off his top batsman in the world  spot after a poor show in Cardiff, but he shone to say the least!

Smith hit a remarkable 215 runs from 346 balls, this man may well be unorthodox but wow he’s a star!  Chris Rogers very nearly matched him with his own 173.  The remainder of the lineup added runs, with the next highest scorer being Peter Nevill on his debut. 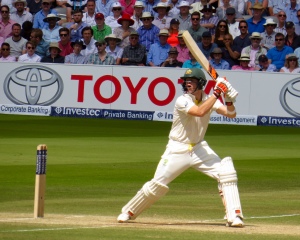 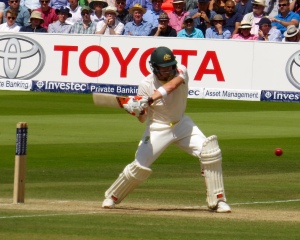 Michael Clarke declared late on Day 2 and wow that flat wicket?  Well it certainly produced something for their bowlers! 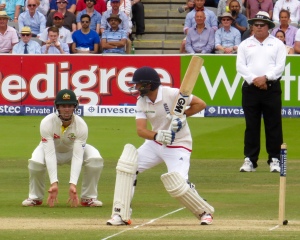 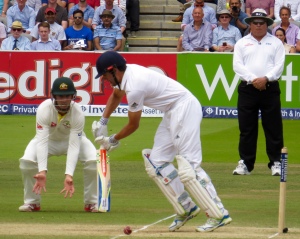 I was listening in as I travelled to the Oval then keeping track on @ByTheMinCricket on Twitter, England found themselves on 30 for 4!  With Adam Lyth, Gary Ballance, Ian Bell and unusually Joe Root walking back to the pavilion within the first 11 overs!  What a disaster! 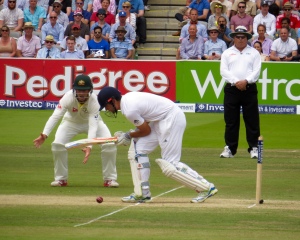 Step up Ben Stokes and Alastair Cook – Cook had watched the wickets tumble from his openers’ spot.  The 2 men put on 145 runs before Stokes fell to the bowling of Mitch Marsh on 87.  Cook played a solid innings and came very close to his century – falling on 96, just after Geoffrey Boycott had said – ‘he’ll get his century’ – no he didn’t Geoffrey!

Amongst the remaining batsmen Moeen Ali added a very useful 39, he is making an argument for giving up the order.  England finished on 312 all out, a differential of 254. 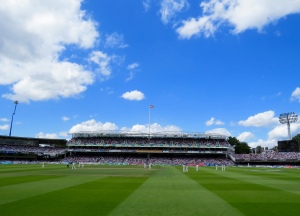 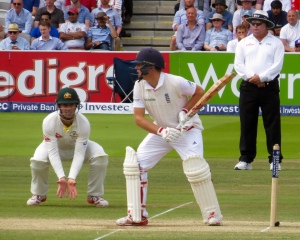 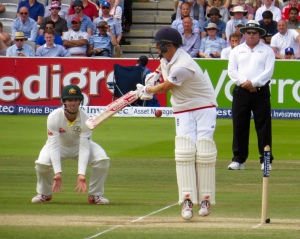 My day at Lords started with Chris Rogers and David Warner at the crease as Australia looked to build an unassailable lead, rather than force the follow on. 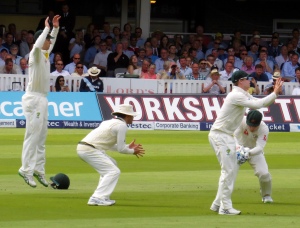 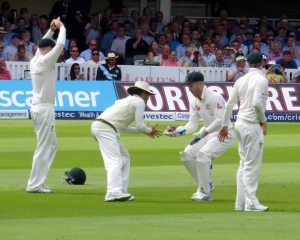 My seat was in the Mound stand – Row 4 – yet that row was in fact the front row – although not a fan of a sideways view it has to be said I had a great spot for taking photos!  I am now going to be quite politically incorrect.  The 2 seats next to me were empty for the 1st hour or so, then filled with 2 men who were clearly lovers of a big lunch!  I couldn’t get my seat down when they did take their seats, then when I did, I basically had half a seat!  Uncomfortable wasn’t the word – it seemed I’d paid £90 for a cramped seat – taking photos was going to be hard!  To my relief they left as Australia declared and didn’t return – a very long lunch I presume! 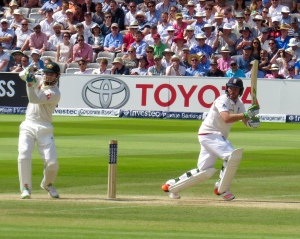 And so to the ‘cricket’ and I am going to use that term loosely!  In the second over of the day I believe Chris Rogers suddenly looked to be in difficulty and sat on the ground, I’d have to say the medical staff were quite slow in coming out to him.

Rogers had been hit on the head in his 1st innings, it has since been said this wasn’t delayed concussion, I hope he’s well and we see him opening at Edgbaston.  He was closing in on his half century but was led from the pitch on 49.

Warner was joined by Steven Smith the pair were a delight to watch, it was a pleasure to see shots from Smith that you’d expect to see in a T20 game rather than a test match at Lords!  Warner was more circumspect and scored a great 83 before he was caught by Cook from the bowling of Ali.

Michael Clarke joined Smith, he’s a man in need of runs having been out for 7 in the 1st innings he was not out 32.  Smith fell to Ali – that part time bowler –  having scored 58 – a superb test for the man back at the top in the World. 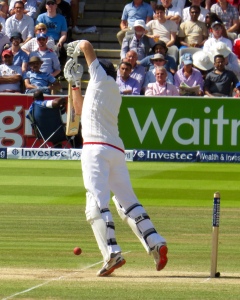 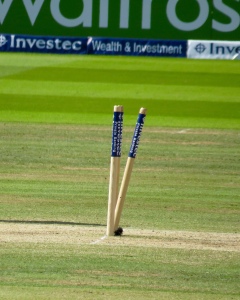 Mitch Marsh joined Clarke and scored 27, including 2 huge 6’s, before his captain declared having doubled the Australian lead they were 254 for 2 – England had taken only 10 wickets over both innings!  And amazingly Jimmy Anderson didn’t have a single wicket to his name. 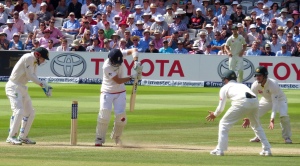 And so in came the England openers, I’m very concerned that I might just be typing a huge row of !!!!!!! here – so I’m going to keep this brief like England’s innings.

I think I’ll just sum this up as quickly as possible – England needed to play a calm innings, they were highly unlikely to make the total set, but there was an outside chance to draw the game if weather intervened.

Well, they must have had a day trip planned for Day 5!  Did they come remotely close to the 500 plus?  No they didn’t – they were all out for a frankly shameful 103!  I can’t even bring myself to go through any details – all I can say is that Stuart Broad was the top scorer on 25!  That doesn’t leave many runs for the rest!

A mention for a wonderful throw by Mitch Johnson striking the stumps at some speed – he ran Stokes out, he seemed to be in his crease – but was up in the air when the ball struck! 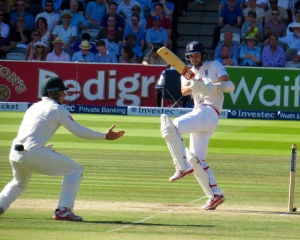 A superb perfomance by the Australians – to come back in such a fashion after their loss in Cardiff has to be admired.  Unusually for me I’m not going to ramble on about England – but the word diabolical comes to mind! 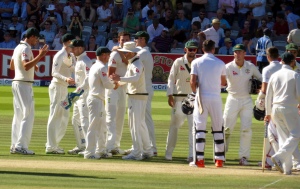 A couple of facts

I enjoyed my day in spite of the English collapse – As always I met and chatted to some lovely people.  Next up Edgbaston,  I have Days 1 and 2 for that – phew!