Having had a day of showers and almost Autumnal weather for Day 1 of the Edgbaston test a better day was promised weather wise.  Could the on field antics match […]

Having had a day of showers and almost Autumnal weather for Day 1 of the Edgbaston test a better day was promised weather wise.  Could the on field antics match those of the previous day? 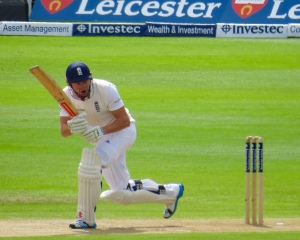 It seems that anything is possible in this Ashes series and wow yes it was to be another cracker!  I had a seat in the Raglan stand and had the pleasure of the company of Simon and Colin for the day.  They’d travelled up on the day from St Albans so were in a position to slowly consume various beer and cider throughout the day.  Laughter was a nice addition to the day! 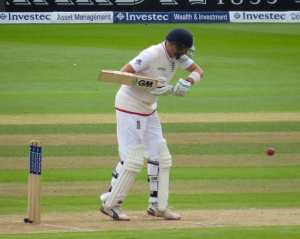 To the cricket – England started the day in a strong position being 3 wickets down and 3 runs behind; things were looking good.  Joe Root and Jonny Bairstow, Yorkshire team mates were at the crease. 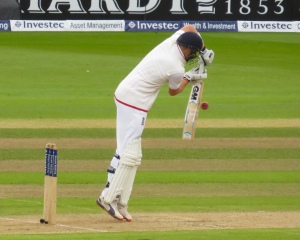 There were high expectations of Bairstow, brought in to replace Gary Ballance – a Yorkshire swap.  However he’d only scored 5 runs when an incredible ball from Mitchell Johnson threatened to take his head off.  He instinctively lifted his bat and the ball flew through to Peter Nevill to see Bairstow despatched.

Ben Stokes was next in, his stay was to say the least a short one, the 2nd ball he faced was another cracker from Johnson, same bat lift, same result!  A second Nevill catch, a second wicket for Johnson in the same over.  England were 143 for 5, A mere 6 runs ahead! 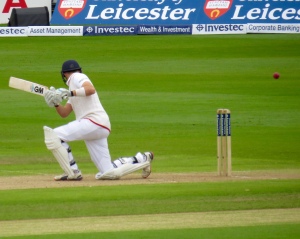 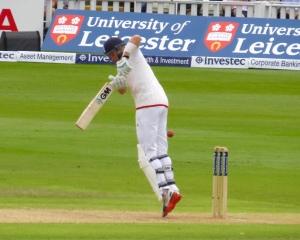 Was a collapse looming?  Jos Buttler joined Root and the pair steadied the ship; Joe Root scored 63 runs before he threw his bat out at a wide ball, Adam Voges took a great catch, Root’s innings was done. 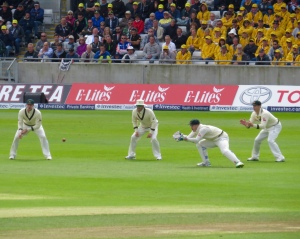 Jos Buttler wasn’t far behind Root, he’d been at the crease for 71 minutes acting as a foil to Root he was caught LBW from the bowling of Nathan Lyon, he’d made only 9 runs.

England were 190 for 7 with Moeen Ali and Stuart Broad in charge of adding runs to build a decent lead.

Ali  really is a batsman who bowls a bit, so his lowly batting slot at 8 really doesn’t tell the story as far as he’s concerned.  Broad has had the ability to score runs and looks very batsman like, but to a degree has looked nervous at the wicket after being hit fully in the face by a ball from Varun Aaron – the ball went through his face guard leaving him looking a lot like a panda for the rest of the 2014 summer. 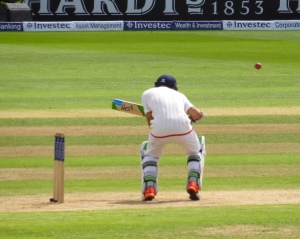 Both men batted with determination and showed a patience and resilience some of the higher order batsmen hadn’t.  Their partnership saw a very handy 87 runs added to the total.  Broad showed no fear of the ball and batted well for his 31, before he was caught by Mitchell Marsh from the bowling of Josh Hazlewood. 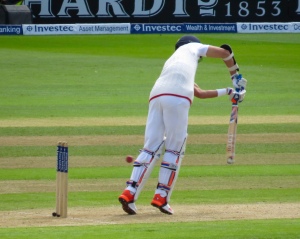 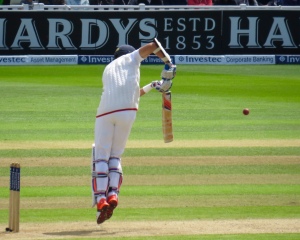 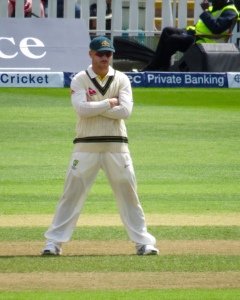 Hazlewood also despatched Ali 10 runs later with a catch from David Warner.  The tail enders didn’t last very long, with Anderson’s wicket being the last to fall to yet another Nevill catch from the bowling of another Mitch – this time Starc. 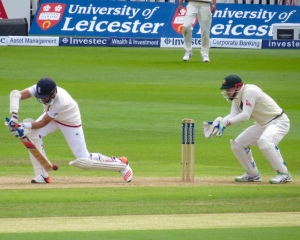 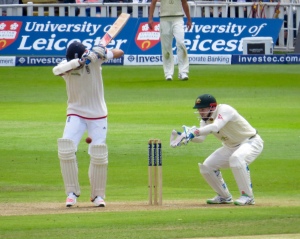 England were all out for 281, a score that looked unlikely after the 2 Mitch Johnson horror balls, with the lower order making up for the collapse in the middle order.  Of the 20 wickets to fall in the first 2 innings, only 3 were clean bowled – and those 3 were Australian wickets.  A fairly remarkable fact. I think. 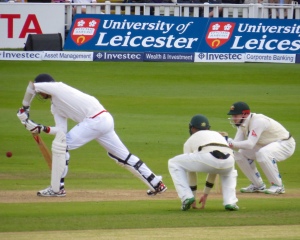 So, England had a lead of 145, would that be enough to see an eventual win for them.  Australia field some of the best batsmen in the world – and in fact in Steve Smith have THE top batsman in the world, on a good day he could knock that many runs off on his own.

Chris Rogers and David Warner opened the batting, Rogers had been the only man to make runs in Australia’s first innings, would he strive again.  Well, no, he wouldn’t – Stuart Broad took his 299th wicket when he had Rogers out LBW. 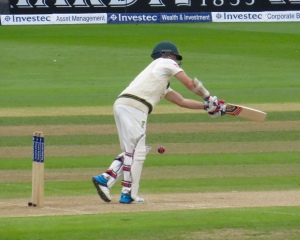 That man Steve Smith came in to bat, he and Warner put on 45 before Steve Finn started his blitz if you like – Smith had made only 8 of those runs before he edged a Finn ball to Jos Buttler. 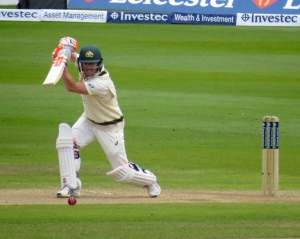 Michael Clarke very much in need of runs was next up, he didn’t stay long, he played at another Finn ball and was caught by a great catch by Adam Lyth, were Australia on the verge of another collapse?

Adam Voges really had a mere cameo role to play in this innings, 1 ball from the marauding Finn and he was on his way back to the pavilion, the catcher this time being Ian Bell.  Australia were on 76 for 4. 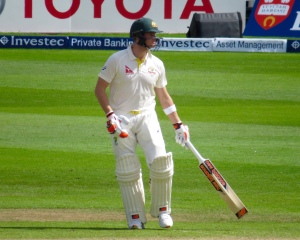 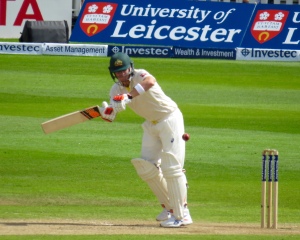 Mitch Marsh joined Warner, who to his team mates relief had been batting sensibly running up pa decent score for himself.  Marsh became the only batsman bowled in this innings, the man with the ball was, of course Finn. 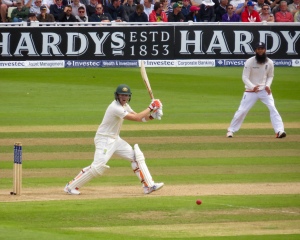 David Warner had amassed 77 runs in some style when he was deemed to be out, another catch by Lyth, this time Jimmy Anderson got a look in as the bowler.  Australia were on Nelsons 111 for 6 and still behind.  Was it possible that this match could end in 2 days? 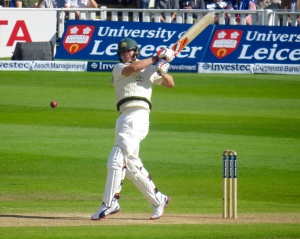 Peter Nevill had other plans, having made 45 runs on his debut at Lords he set to saving his country from the embarrassment of losing by an innings in 2 days.  Mitch Johnson who’d shown he could be handy with a bat in Cardiff didn’t hang around for too long – he was caught by Stokes from the bowling of Steven Finn. 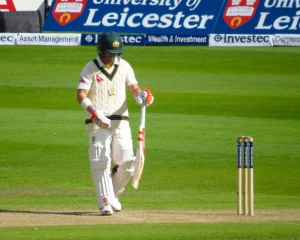 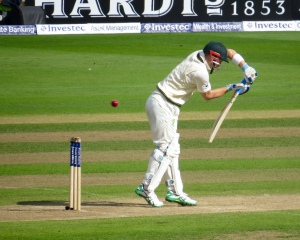 A thoroughly enjoyable, jumping out of your seat, shouting out loud game of cricket!  I was on my way to the next thing up on my personal calendar the next day but must make mention of the final result. 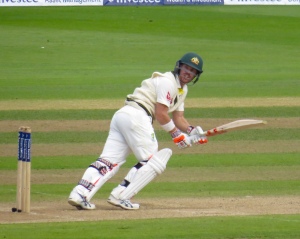 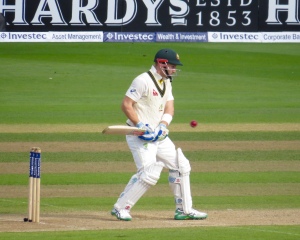 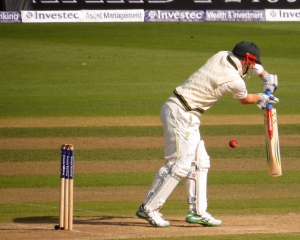 Nevill and Mitch Starc his next partner  had a partnership of 64 before Nevill was caught by Buttler from the bowling of Finn.  He’d made a very respectable 59 – his wicket meant that, Steven Finn on his return from the wilderness had a wonderful 6 wickets for 79 runs!  An amazing feat!

Mitch Starc had stuck his heels in too and made 58 before he was caught out by the ‘sub’ from the bowling of Ali.  I’ve forgotten to mention that England had a blow on the 2nd day with Jimmy Anderson being forced to retire with what looked like a side strain, a real shame, and on his birthday too! 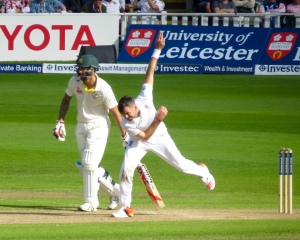 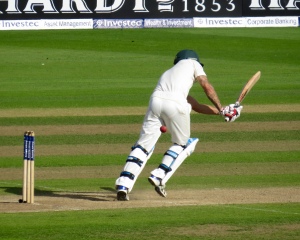 Hazlewood and Lyon both made double figures and Australia finished this second innings on 265 setting England a tricky 120 to win. 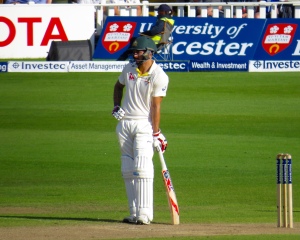 I wasn’t there so won’t linger – The opening pair fell with Alastair Cook being bowled by Mitch Starc for a mere 7.  Adam Lyth didn’t fare much better being deemed to be LBW from the bowling of Josh Hazlewood.  England were on a nervy 52 for 2.

Could Australia pull off a miracle?  I’m glad to say the answer to that was a resounding NO.  Ian Bell seemingly thriving at 3 made 65 and Joe Root made 38 – England won this test by 8 wickets!

To keep labouring the point because it interests me – 32 wickets fell over the 3 days – only 4 of those were clean bowled and all of those were Australians facing English bowling.

I ate food I’d bought at the ground both days – a reasonably healthy sandwich (not so healthy crisps) from Waitrose with a slice of Lemon Drizzle cake and a bottle of water at the cost of £7.50.  Well over my 1000 words so here’s where I stop.