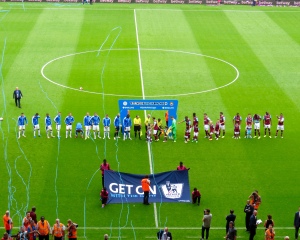 With a whole day to fill before England RU kicked off their game against France I decided to look at West Ham’s fixtures and lo and behold they were playing Leicester at Upton Park!  As it’s sort of on the way to Twickenham it seemed rude not to partake!

I booked my ticket online at the last minute, which I think was the day before – lots of sport since hence the memory loss.  It arrived just before I was leaving in spite of the fact I was expecting to collect it.  Bit of a phew that I didn’t leave earlier! 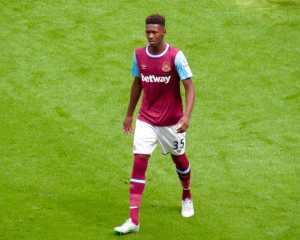 There were a few seats dotted around to choose from, so it’s always worth checking if you fancy a game at the last minute.  My seat was literally on the half way line above the Director’s Box – to say the least the view was wow! 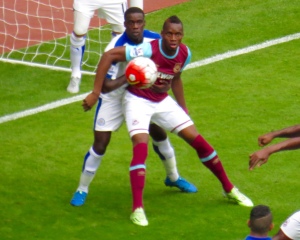 Upton Park is an easy journey for me, it’ll be even easier to get to West Ham when they’re at the Olympic Stadium so at this time I have my name on the list for a season ticket. 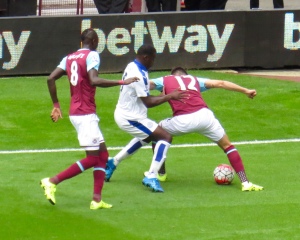 I was in the BetWay Stand Upper so proved to myself that I really should take up climbing stairs as a form of exercise – I didn’t quite need oxygen, but I was very pleased to see the floor rather than more stairs. 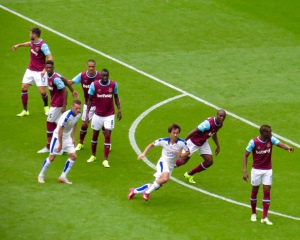 Although I am a fan of football I watch so much rugby that I’m not hugely knowledgeable or up to date these days, I’d have been your girl in the late 70’s early 80’s but in spite of making sure I watch Match of The Day and love listening to 606 I am by no means a football ‘expert’ 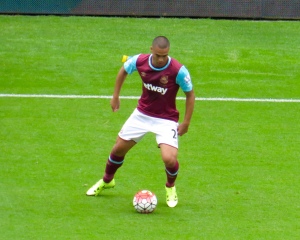 So, on that basis I’m not going to say too much about the game.  But. I do have to start with Bubbles – If you’ve never been to The Boleyn Ground you really should try before West Ham leave.

I know the tradition of welcoming the team to I’m Forever Blowing Bubbles will carry on I can’t think it’ll be the same.  I really do need to go to Anfield one day, but so far hearing Bubbles sung is one of the best traditions in football for me.  I love it, you’ll find me belting it out with all of the die hard Hammers. 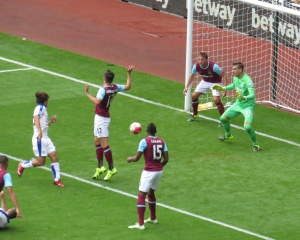 Both teams were on a high after winning their first game of the season – Leicester had beaten Sunderland 4 – 2 at home and amazingly West Ham had gone to The Emirates and beaten Arsenal 2 nil!

I imagine the home fans were looking forward to seeing a great performance.  My neighbour on one side was an avid West Ham fan,  Alain Nicolle from Guatemala!  How amazing, there were some fans from Cologne in the stadium but I imagine Alain had travelled the furthest. 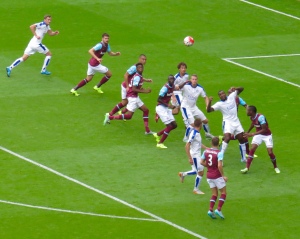 I asked why he supported the men in Claret and Blue over any other London club and he explained that he loved their history.  He certainly knew all of the players and their capabilities. 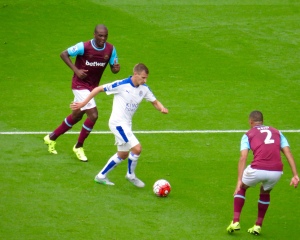 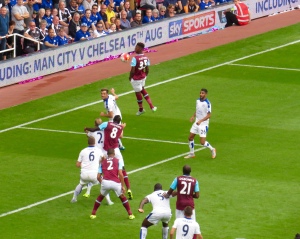 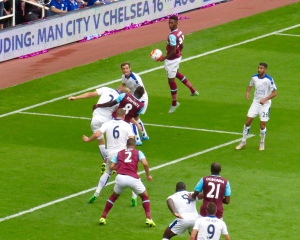 West Ham gave a start to their wonder 16 year old Reece Oxford, I saw him play against Lusitanos and he has a strong presence for a man of any age, let alone a teenager!

I think a quick summary of the game – let’s see if I can do this and not ramble.  West Ham had 70% of the Possession but as far as my eyes could see spent far too much time on the ball.  Their game didn’t flow, giving Leicester City the time to defend the ball. 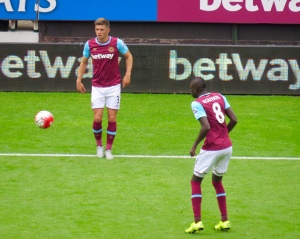 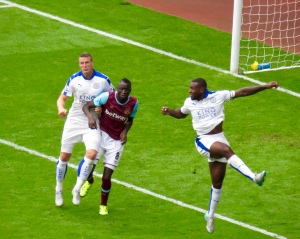 For the 30% that Leicester City had possession they looked a lot more dangerous, 2 players in particular shone – Shinji Okazaki and Riyad Mahrez.  They both moved around the pitch and with the ball at their feet with skill and pace.

Each man scored in the first half, Okazaki, one of the smallest men on the field with his head and Mahrez with a strong shot after one of his fellow players (sorry for the missing name, got photos though) ran with ease into the box before teeing up the ball for Mahrez.  Leicester 2 nil up before half-time wasn’t quite what the doctor ordered. 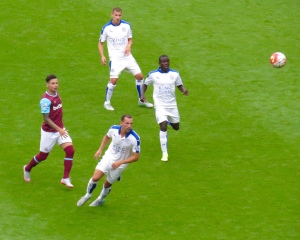 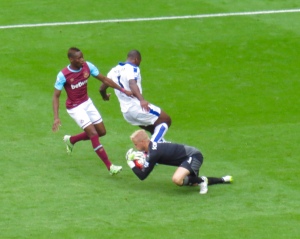 Reece Oxford made way for Pedro Obiang at half time – he wasn’t the only player to have struggled in the first half by any means but Obiang brought a much snappier mode to the play.  West Ham looked a team who wanted to win in the 2nd half.  Had they played with the same tempo in the 1st the end result may well have been different. 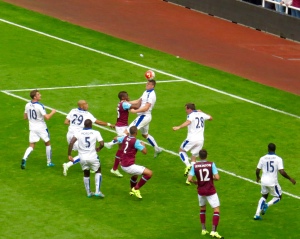 There was something for the home fans to cheer rather than groan about in the 2nd 45 minutes – Dmitir Payet scored a deserved goal in the 55th minute giving the hope of at least a draw.  But strong defending and a good display by Kasper Schmeichel meant West Ham were unable to find the goal again. 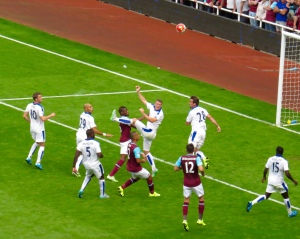 Their chances were damaged for a few weeks when they included Adrian in their attacking force, goalkeepers tend to be in the comedy gloves for a reason, I’d judge that it’s rare to find a player with good feet in goal.

On this occasion all Adrian’s foot was good for was landing a kick in Jamie Vardy’s midriff – an instant and proper red card.  The man with one name will I believe sit out the next 3 games.  (Although I’ve since read that West Ham are appealing the card) 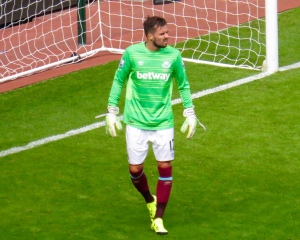 And so Leicester City won their 2nd match and their fans finished the game singing – ‘We are top of the league’ – which I believe they were at that point – who’d have thought! 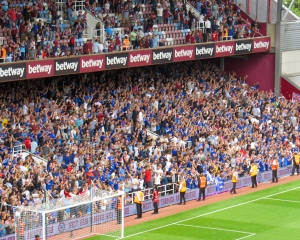 A couple of facts