I’d guess that it’s been well over 30 years since I’ve watched live tennis, and as I recall that was John McEnroe at Wembley.  In fact I’ve only watched tennis […]

I’d guess that it’s been well over 30 years since I’ve watched live tennis, and as I recall that was John McEnroe at Wembley.  In fact I’ve only watched tennis indoors, that was a schoolgirl error this year, I should’ve tried for Wimbledon or Queens!  Maybe next year. 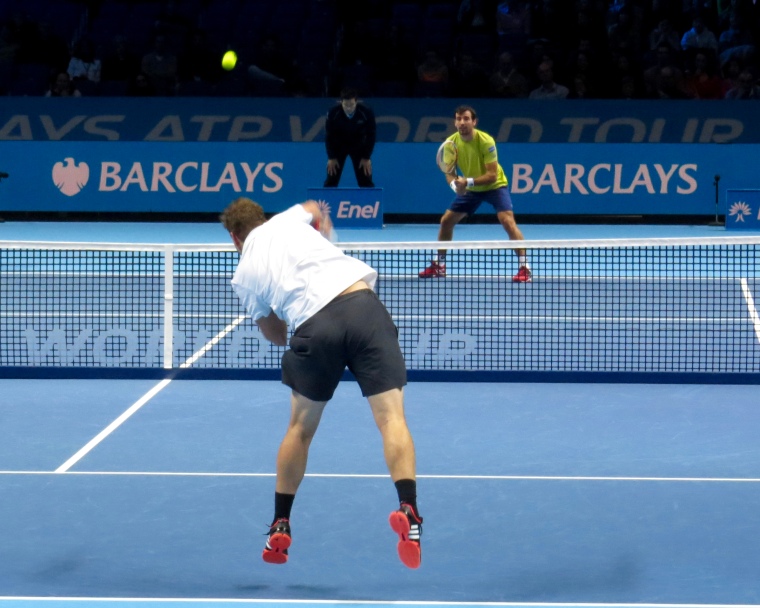 I booked an afternoon at the O2 to watch the ATP Tennis Finals back in March; I was clearly not engaging my brain when I did so!  When I printed my ticket out on Wednesday I’d bought a ticket for Friday.  Although not a natural blonde I really can behave like one at times!

I decided to put the ticket on Viagogo at less than I’d paid for it and with Roger Federer on the schedule it went within a few hours; I then bought myself one for the day I could actually go for £2 more than I’d received back.  So, my stupidity didn’t turn out to be too disastrous.

I arrived at the O2 nice and early, I knew thee were going to be queues for security checks, a necessary inconvenience.  The search was in its own way a comfort.

However, a moan coming now, I fail to see why absolutely no food or drink could be taken into the Arena itself.  This event went over the lunch period and it has to be said food in spring events is largely unhealthy and over priced. 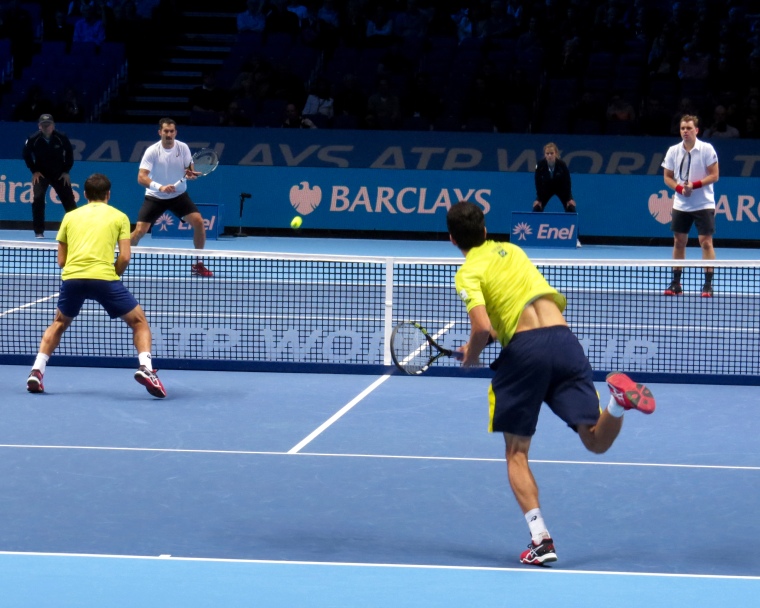 I needed to eat while I was there and decide on a Chicken Burrito, probably the healthiest option available, it set me back £8.50 which was steep, the bottle of diet coke for £3.50 was quite frankly a scandalous price! 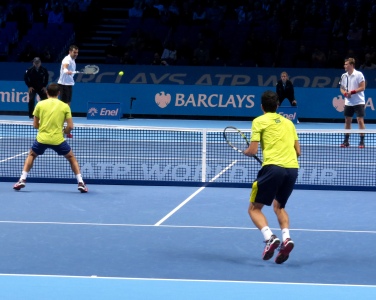 And so to the sport!  I’m going to upset a few tennis lovers now – I’m not a huge fan of the game, I will watch it if my first choice sports aren’t on, but it isn’t in my top 5 sports.

But, I was thrilled to discover that I’d be watching Rafael Nadal, of all the recent players he’d be the man I chose to watch if I’d had any control.

Before the match between Nadal and David Ferrer we were treated to a doubles match – again I’m ashamed to say I hadn’t heard of any of the participants.

Ivan Dodic and his partner Marcelo Melo  (In Yellow) had finished the rankings in 3rd place.  Marcin Matkowski and Nenad Zimonjic (in White) were 7th.  The men in yellow were therefore favourites I imagine.

With a deadline to play to, the doubles pairs play 2 sets with a ‘tie break’ style session to decide the match if things stand equal at the end of the 2.  The first to 10 points win the tie.

I met a delightful couple from Wiltshire before play started – Julian and Carolyn Price – they were big tennis fans and lovely to talk to!

The doubles match was very entertaining and didn’t quite go as expected; Matkowski and Zimonjic wont the first set by 6 games to 3, then losing the 2nd by 7 games to 5.  The higher ranked pair inevitably won the decider by 10 points to 6.

The game was very enjoyable, fast paced and exciting at times.  The set up on the court is quite amazing, clearly a n Umpire up in his chair but also a further 9 officials.  And then we had the Barclays Ball Kids – they were amazing, so precise and disciplined! 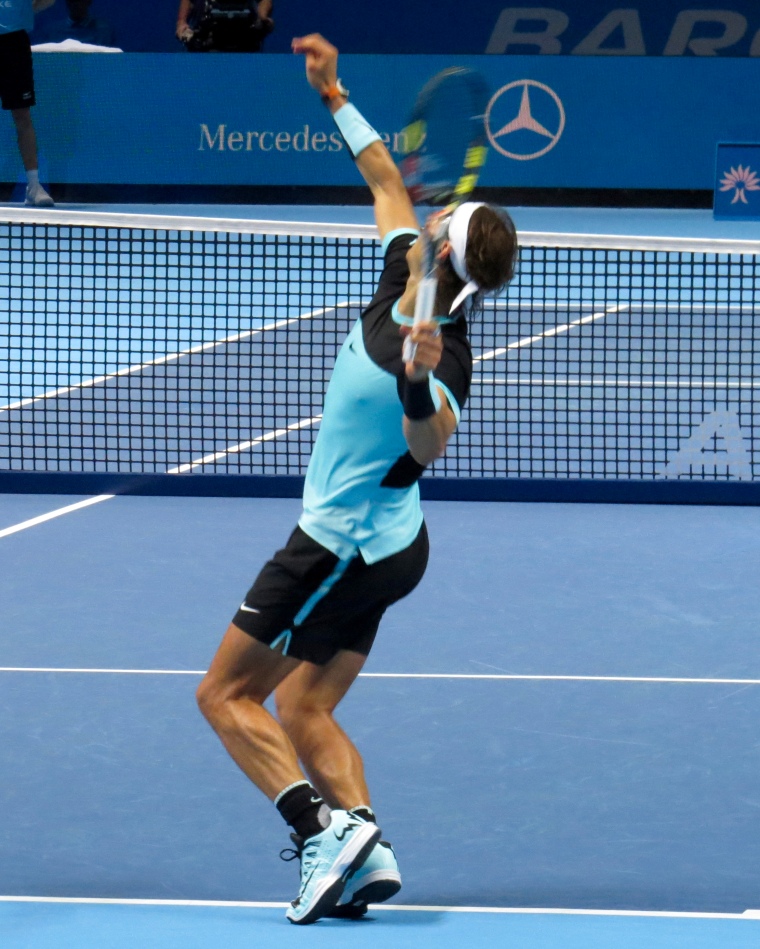 With the doubles game decided the Arena started to fill up, I was joined by Amy Pflughaupt – a lady after my own heart from St Louis in America.  She’d travelled over, via Paris, on the day of the atrocities, to see U2 in Dublin.  She’d added the tennis and it turned out my Sunday destination, Spurs v West Ham to her trip!  Amy was also a tennis fan and had been to Wimbledon twice, she put me to shame! 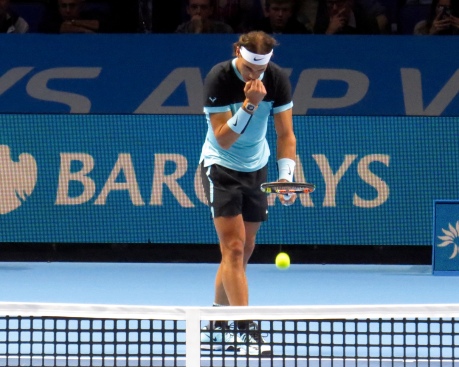 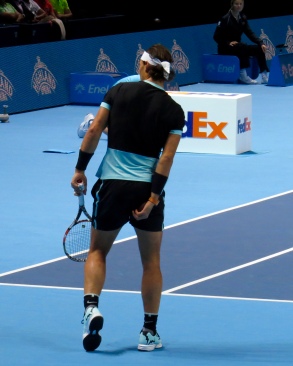 There was a very big build up to the singles match – Rafa Nadal had finished the rankings in 5th place and David Ferrer in 7th.  Nadal had 2 wins in the tournament to his name, Ferrer had 2 losses.

I’d been sent a tweet referring to Dan Biggar and Nadal – I had no idea what it meant until I saw his pre-serve ritual!  My goodness, considering he does his thing before pretty much every serve he puts Biggar to shame! I knew about the moving his shorts thing (being diplomatic) but had no idea about touching each shoulder, then his hair both sides and face, several times,  it was fascinating!

This match didn’t go as expected either!  Nadal won the first 2 games easily and Amy and I thought it might be over too quickly.  I imagine Nadal hoped it would be too with a semi-final against Novak Djokovic booked for the following afternoon.

David Ferrer played with skill and determination and won his first set of the week, meaning we’d be treated to the full 3 sets as it worked out.  The two played some great rallies and both made some very skilful shots. 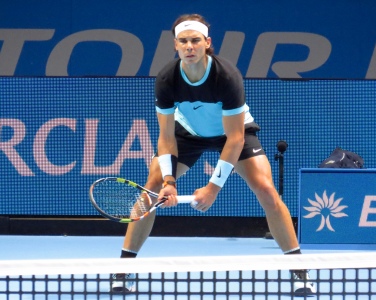 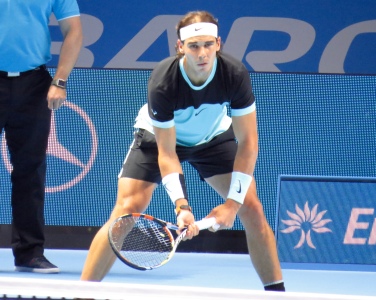 It was quite amusing to hear the man in front of us telling his friend that Nadal clearly wanted to lose, I saw nothing to suggest this was a man who didn’t want to win.

And so it was, Nadal pulled back the next 2 sets to win the match, the first game of the final set seemed to be an endless one as game point kept switching hands. 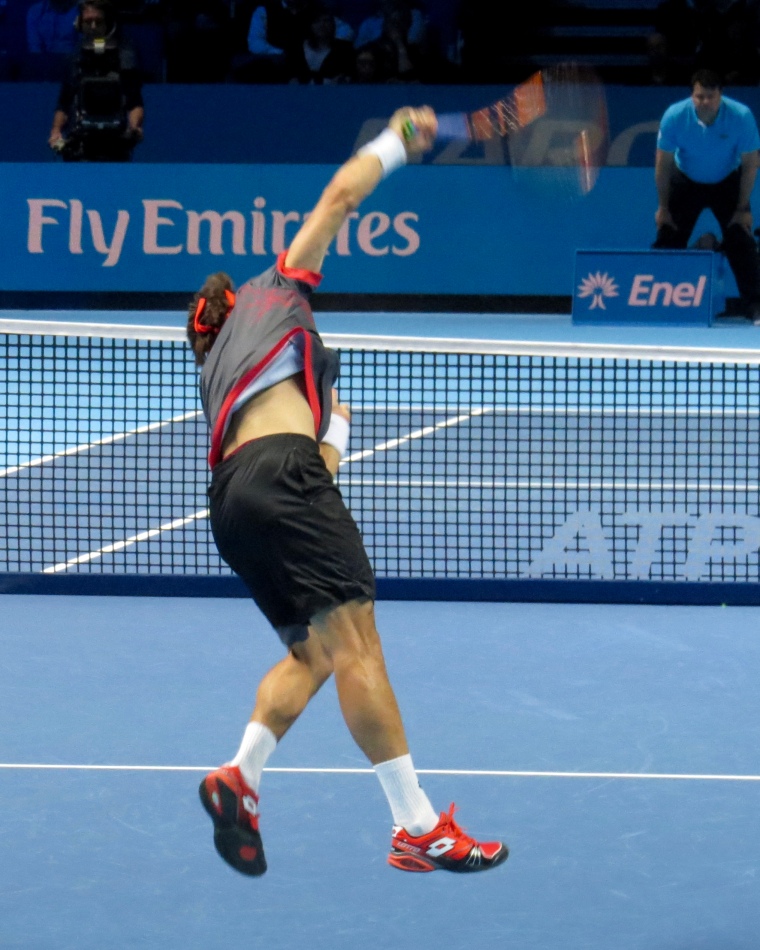 Again I thoroughly enjoyed both the tennis and the company; I think I’ll be looking for a ticket (for the right day) again next year.