With no rugby within easy reach I had a search for some sport for my weekend – I’ve had one without sport so far, so I could attend a very […]

With no rugby within easy reach I had a search for some sport for my weekend – I’ve had one without sport so far, so I could attend a very special birthday celebration for my lovely friends Sue and Henry, but I planned not to have another.  I found Spurs v Hammers!  I was pleasantly surprised that I was able to buy a ticket very easily online.

Now, I was going to be conflicted – I starting my live sport watching at White Hart Lane, where I stood on the Shelf as a teenager.  I can recall one game during the 1977-78 season in Division 2 when I missed most of the football, I was too busy trying to stand on my feet!  In those days I used to take an Infant School chair with me to stand on, not too sure what happened that day!

I decided to travel to White Hart Lane by train – I was a little disconcerted to be told at Liverpool Street by a Hammers fan that Spurs was the only place he’d come away from feeling scared!  I met my new American friend Amy for lunch before we set off to Tottenham.

The journey from Liverpool Street was a quick one, with a short walk down the road to the stadium; it was busy but it felt fine, no hint of danger at all.  Amy and I parted ways and went off to find our seats; mine was  virtually on the half way line – I was thrilled!  I had a great view!

I’d gone dressed as a rugby fan, because that’s what I generally am and explained to the Spurs die hards around me that as I was ‘confused’ I’d be cheering both teams and hope that was ok.  I was sat amongst some very nice men, I state that because I have to say there were very few women and I certainly couldn’t see any there alone.  (Amy was in the opposite stand)

The mix at the various different sports I watch on a regular basis and the ‘extras’ I’ve added in this year really interest me, this crowd was very male dominated.  I had a conversation with Tony Gale in the summer at The Oval – he was amazed that I go to football on my own, not that common I can see. 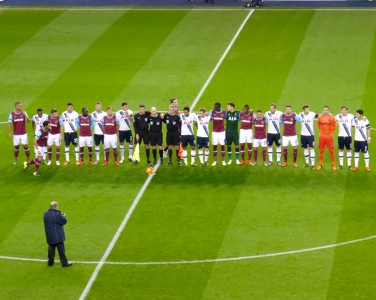 With the Premier League returning after an International break the whole league paid tribute and showed their solidarity with the people of Paris after the horrors of the terrorist attacks the week before.  The teams mixed themselves up in the middle of the pitch and linked arms as La Marseillaise was played,the crowd clapped for the duration.  A touching few minutes.

The match started and I was disappointed to be told I couldn’t take photos – hence the lack of decent photos here.  160 Events and this was a first, maybe I’ve been lucky up until that point.

Both teams had started well in the league, with some unexpected results – notably Spurs beat Manchester City 4 – 1 a week after West Ham had beaten the same opposition 1 – 2 at the City of Manchester Stadium.  West Ham had beaten Liverpool at Anfield a couple of weeks before.  Spurs were 5th to West Ham’s 6th in the table.  Those stats should have ensured a tight game – but…..

I’d say for the first 20 minutes of the game West Ham were slightly ahead on possession, I’d also say I’ve seen much better football all round.  Things to a change for the better however when Harry Kane scored the first goal to put Spurs ahead.  It certainly livened the crowd up, more about that later.

As this isn’t one of the games I go to regularly I won’t go all match report stylie,  just report the facts.  The 2nd goal was a superb header by Toby Alderweireld – he rose salmon like as the ball came into the box from a corner, a really well taken goal.

The team went in at half time with the score on Spurs 2 West ham 0.  That lead was stretched 5 minutes into the 2nd half when Harry Kane scored his second to make up for a howler in the 1st half.  A shocking ‘clearance’ by West Ham when Adrian (the man with on name) threw a short ball to Tomkins who passed straight to Spurs’ Christian Eriksen, he in turn passed to Kane who made no mistake in scoring the goal.

Kyle Walker making his 250th appearance scored a lovely goal, calmly slotting the ball past Adrian with the outside of his boot.  Now is the time to have a moan about the Spurs crowd – their team were winning 4 il at this point and all they could sing was – You’re F*****g S**t – not we’re really good, or a song to celebrate their team doing so well , what a shame!

West Ham scored a consolation goal through Lanzini – it will have been scant consolation having shipped 4 goals to their fierce rivals.

A different ground so a few facts for you –

I was glad that I went to White Hart Lane and should maybe go back when there isn’t a local derby going on – but I wasn’t keen on the general atmosphere – I can certainly understand why there weren’t too many children there!