As part of my new more of a website than a blog thing I’m going to post past articles I’ve written on In The Loose, they’ll include interviews and pieces about things in rugby that I really care about.  I start with my very first interview, with one Hugh Vyvyan – I spoke to him in November 2013, how quickly time flies!

The recent headlines about that stark and sad reality of the life of Kenny Samson the Arsenal and England footballer, who until 2011 had held the record for the highest number of caps for England at Full Back; had me wondering what rugby does to prepare players for life after the game.  I hope to interview a couple of players at different clubs but the first name that came to my mind was Hugh Vyvyan the former Saracens Second Row.  After a series of email exchanges trying to find a time for two busy people to meet we happened upon a slot before a Saracens Supporters Association Quiz Night.

Before I move on to Hugh the ex-player some background.  With 6 older, rugby playing brothers who all played for Richmond there was no way Hugh was going to avoid the game!  The family moved to Cornwall before little bro was able to join his older brothers at the London club.  Hugh attended Downside School in Somerset and was coached there by former England fullback Jon Callard, now Hugh is it has to be said tall!  Callard saw a forward rather than a fly half in Hugh and moved him into the forwards at number 8 while at the school; one of the 6, Charles played in the back row at Sale and was an influence on his brother.

As many school leavers do Hugh took a year out after school and travelled to South Africa where he played for the Villagers club in Cape Town; playing Under 21’s rugby at 19.  Hugh is tall, standing at a lofty 6ft 6 so an ideal height for the second row, but was playing in SA at a time when teenagers didn’t spend hours in the gym.  The experience was a tough one, but probably one that helped take his rugby to another level.

On his return to England Hugh decided on a Theology Degree at Newcastle Uni; the pick was a very shrewd one as rugby was changing and a bright and exciting team in Rob Andrew and Dean Ryan so happened to be at the Newcastle Falcons!

Things were slightly different in the late 90’s and whilst playing for the Uni Hugh attended trials for the Newcastle club, and made his debut against Moseley in March 1997 as the team from the North East continued their successful drive to Division 1.  The Falcons were part of Sir John Hall’s sporting club along with the Newcastle United, Newcastle Eagles (Basketball) and the Newcastle Cobras (Ice Hockey) an amazing set up to show the North East meant business.

As a Theology student and in a different era, Hugh was on a £2000 a year contract but with a fee of £500 per game; he started 25 games, that’s quite a lot of beer money!  He stayed at Newcastle until 2004 and played with some greats including the rugby god that is Jonny Wilkinson.  And the degree? A creditable 2.2 and an interesting time, not necessarily a subject that would lead to a career in the future but…

2004 saw Hugh become a Saracens player; this is only my 5th year as a season ticket holder at the club but it is very clear to see that he is held in high regard both by his fellow players/colleagues but also by the fans.  A Highlight for Hugh was the Aviva Premiership Final in May 2011 as he became the most capped player in the Premiership with 238 appearances, Saracens went on to win the game after a nail biting finish.

That turned into quite a lot of ‘background’ so now to the crux of the matter; we talked about how the ethos has changed at Saracens.  The arrival of Brendan Venter saw a culture change at the club, Hugh’s previous experience had been that being a player was all about the rugby, and training took place 4 days a week.  That changed at Saracens as the time spent training has been cut but the intensity lifted as the time spent by players at the club is it seems 7% of the whole.  (bearing in mind sleep is a factor in the 100%).

Dr David Priestley joined the team as Head of Psychology and Personal Development.  On joining Saracens, having had a background working in cricket and football, Dr Priestley sat back and watched for 2 months.  The situation at the club now sees every player with a Personal Development Programme tailored to suit the individual to ensure they’re fully able to make the transition from being a full-time rugby player to building a career in the ‘real’ world.  The players have benefitted from a number of on-site courses such as strength conditioning, car maintenance and plastering; 95% of players are in education, apprenticeships or work experience. (an interview with David Priestley will follow later)

In the past it was up to the player to find work opportunities, Hugh himself spent 3 years with Merrill Lynch on work experience.  Saracens allowed Hugh to make an unusual move after the 2011 final; he went part time with them, working in the City for 3 days spending 2 training days with Saracens along with game day when needed.  During this time he also mentored one of Saracens bright young hopes George Kruis.  Hugh was keen to confirm what is quite plain to see at the club; they genuinely care about the individual.  The longer I spend time around the players the more it’s clear to see that they have a great team ethos, at times in the last 4 years I have wondered about some of the places they’ve disappeared off to. Places such as Miami, the Munich Beer Festival, South Africa; however it’s plain to see it fosters a real team spirit, they seem to like each other and are prepared to work hard and give the loyalty back. 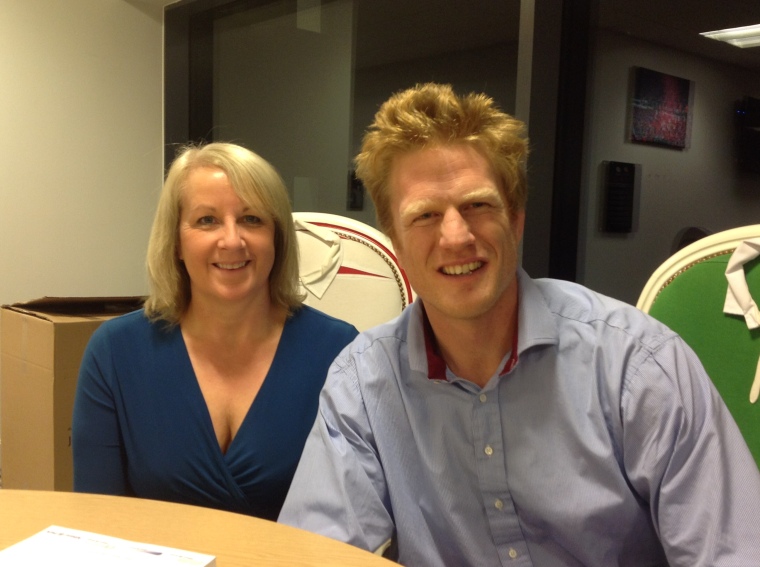 Hugh disappeared for a short while from Saracens as he worked for an insurance broker in the City for a year.  But the move to Allianz Park opened up new opportunities for a Saracens favourite with oodles of charisma;  and Hugh came home as Director of Sales.  The move to Allianz has been a great one, but, seats need filling and hospitality needs to thrive, this is now in Hugh and his teams’ hands.  So he finds himself in the City seeking new interest in a game that has been his passion for more than half of his life.  The club are also looking to engage with schools across the area offering discounted tickets to the fans of the future and their parents.

The interview with Hugh Vyvyan was very interesting; it was great to hear that Saracens for one are doing everything they can to produce rounded individuals who can look forward to a future once their playing days are over.  Turned out my first meeting on the subject was a very informative and interesting one!  Thank you Hugh, and an extra thank you for sitting down when we had a photo taken, we’d never have fitted in the same photo standing!

Postscript – Hugh remains a popular character at Saracens – the place wouldn’t be the same without him!  I saw Hugh play for the English Legends against the Irish Legends in Dublin in March 2015 – he was Man of The Match!  Oh, I also saw him play football in 2015 – not such a good plan!