The Australians arrive and take the Superleague scene by storm

Ordinarily I write some sort of report for every game I go to, but just this time I’m going to post the photos from the 2 games I attended but write about the series as a whole. 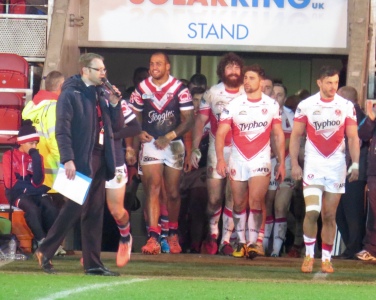 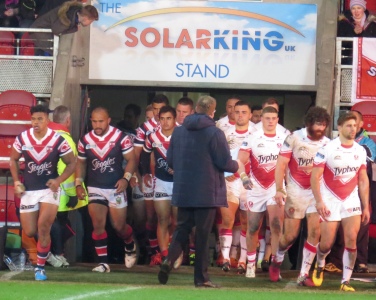 The World Club Series is in its’ second year after the World Club Challenge was expanded in 2015 to include a further 2 clubs from both Superleague and the NRL.  The Club Challenge itself has been contested 24 times, with the first match in 1976, they became a regular feature in 2000.  The win ratio is actually 50/50 with English clubs matching the NRL clubs 12 apiece. 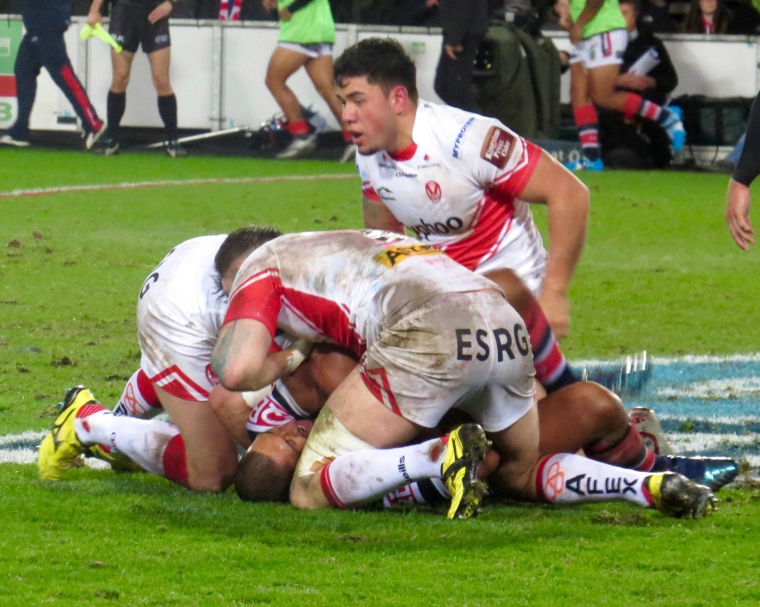 I was at the Wolves and Warriors games and saw 2 largely competitive matches, there wasn’t a runaway winner.  Had it not been for a silly penalty in Golden Point time Wigan may well have been triumphant.

Clearly the Superleague winners Saints didn’t fare too well against Russell Crowe’s outfit, failing to register a single point.  But the overall situation didn’t read like a gaping distance between the 2 leagues.

The second run of the Series came after a series win against the Kiwis for England, but this was of course club rugby.  The 3 teams contesting the series in 2016 hadn’t had things their own way at the start of the Superleague season.

Two heavy defeats for Saints and Leeds wasn’t the ideal preparation to welcome some of the very best rugby league players in the world. 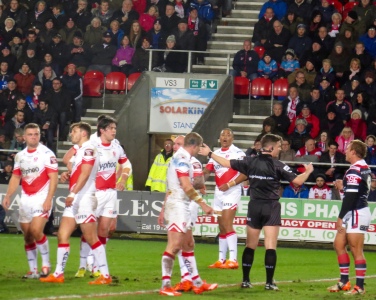 I was again at the Friday night and Saturday night games and was hoping to see two competitive matches.  What I saw on Friday and to a large degree on Saturday was a masterclass in how to play exciting rugby league. 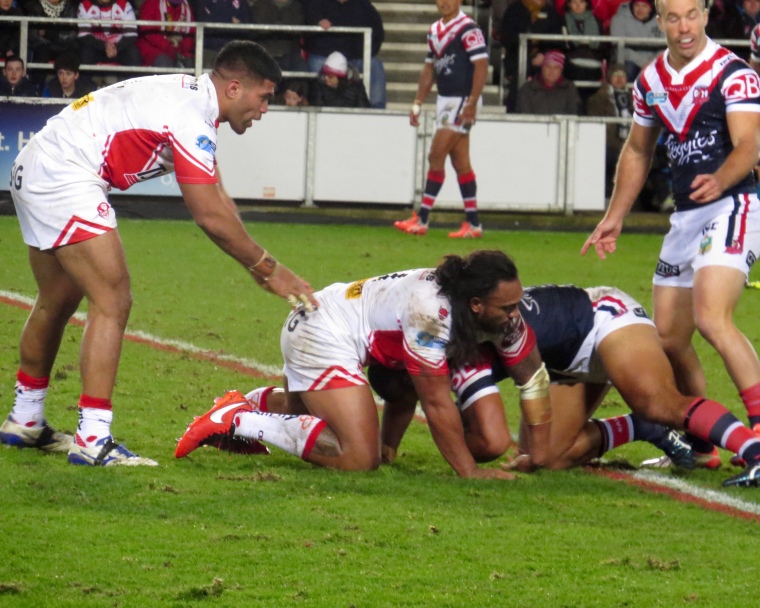 The Sydney Roosters ran in 7 tries as they beat Saints by 38 points to 12.  As good as Roosters were, Saints were on the whole poor, they gifted 2 tries to the visitors as well as several needless penalties.  It was something of a shock to hear that Head Coach Kieron Cunningham was largely positive about his teams’ performance. 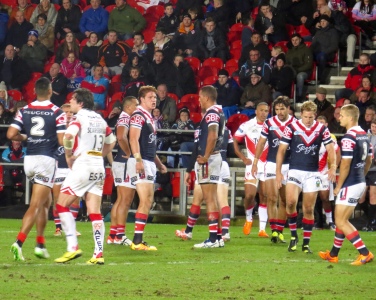 My company during the game was great as always when watching rugby league in the North.  To my right was Joe Lewis – he’d watched his first Saints game in 1953 at the age of 2!  Taking 2 buses to the home matches when his family moved at the age of 3, with his 7 year old brother! 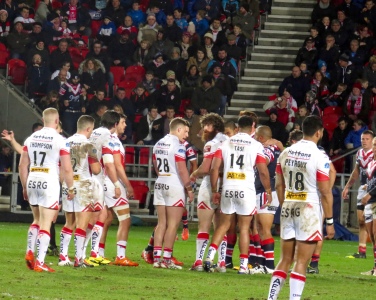 On my left was Carole Smee, amazingly we’d sat next to each other when I got up for the Saints v Wigan Derby in 2014!  What chance!

So, at the end of game one it was – Superleague 12 NRL 12 – would Wigan be more competitive. 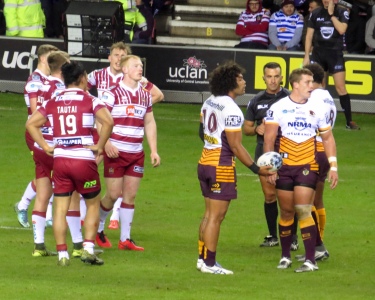 Now may be the time to mention how disappointed I found myself at the attitude of many Superleague fans – they simply didn’t want the English team to win unless it was their own.  How anyone could support an Australian team over an English one I just don’t know!

Wigan Warriors v Brisbane Broncos were up next, and the 7 tries thing was starting to become something of a theme!  Broncos ran in 7 and were a delight to watch.  Wigan didn’t make the same errors as Saints but they couldn’t live with the Australians all the same.

They also suffered a huge blow when playmaker Michael Mcllorum fell to the ground clutching his leg in the first half.  He immediately called for help and was surrounded for what seemed an age before being taken from the field with what has later emerged to be a broken and dislocated ankle.

In common with Saints, Wigan scored 2 tries – but the final score was Wigan 12 Sydney Roosters 42.  There was a great crowd of in excess of 19,000 many, for whatever reason left before the game had finished. 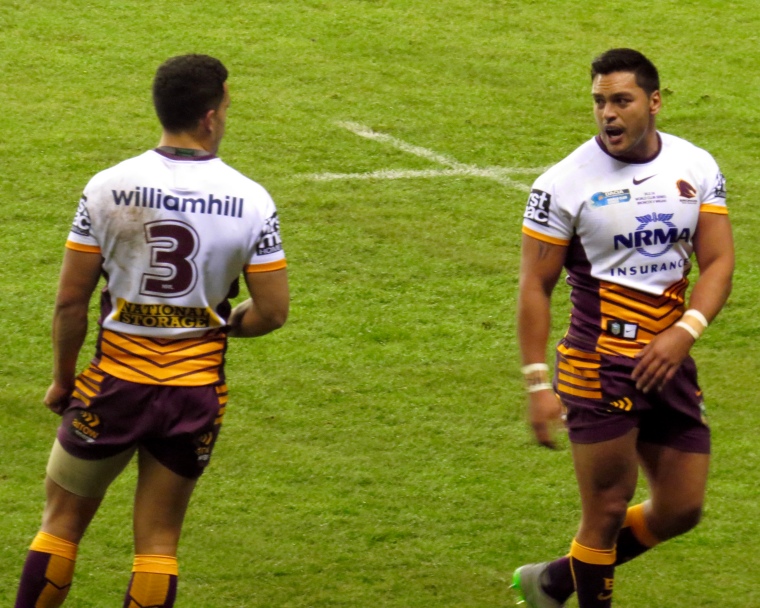 A running total of Superleague 24 NRL 80.

Being a rugby league fan who lives in Essex meant I couldn’t make game 3 of the Series – I did however get to watch Leigh Centurions v London Broncos!  More to follow later.

Leeds Rhinos – Triple Champions in 2015 were facing the North Queensland Cowboys for the World Club Crown.  I was pleased to hear on my drive home that the score was 4 apiece at half time – perhaps we’d actually have a close game and even an English win?

But no, the 7 tries theme continued – with the Cowboys adding a further 6 to their first half effort.  Leeds were nilled in the half giving a final score of Leeds 4 Cowboys 38. 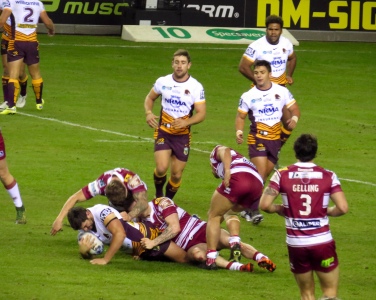 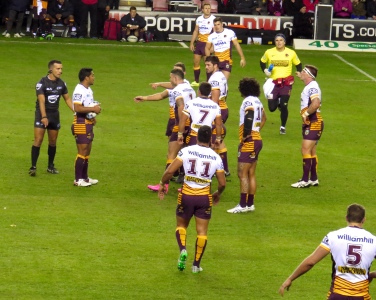 I haven’t had the benefit of watching the final match but I’d say that what I did see really did justify that gap.  There have been many questions about the why’s and wherefore’s – is it the salary cap has been one point raised on social media? 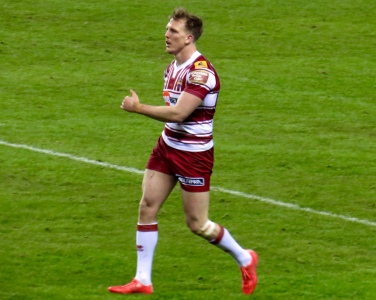 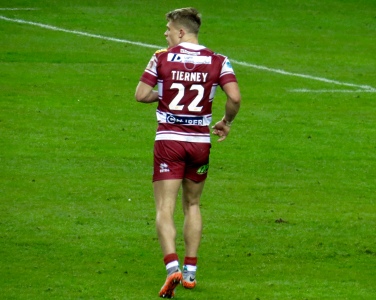 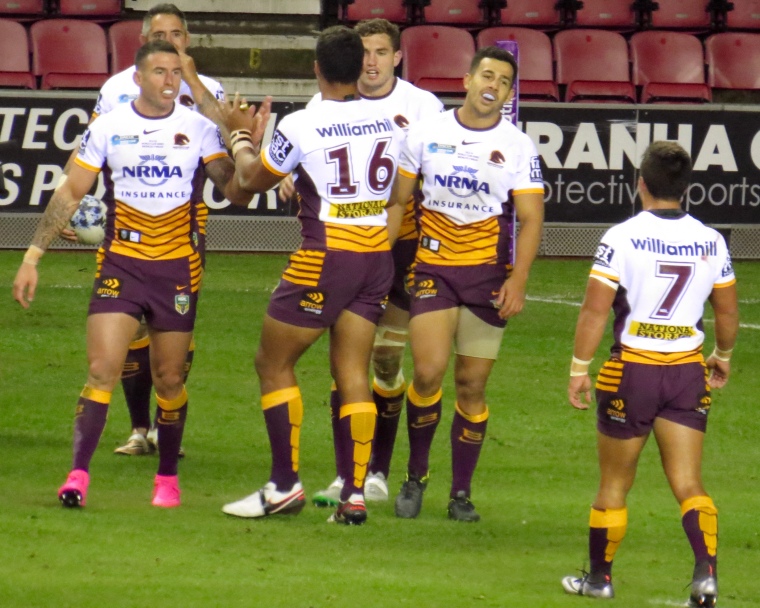 I’ve written before about Embed The Pathway and will be doing so again, having been to see the delivery of a rugby league class to a group of U12’s by Warrington Wolves coaches.  This programme could well be one of the ways to see both greater participation and skill levels.

I have a lot more photos of Wigan as I was made to put my camera away at Saints which was a real shame as I had a front row seat. 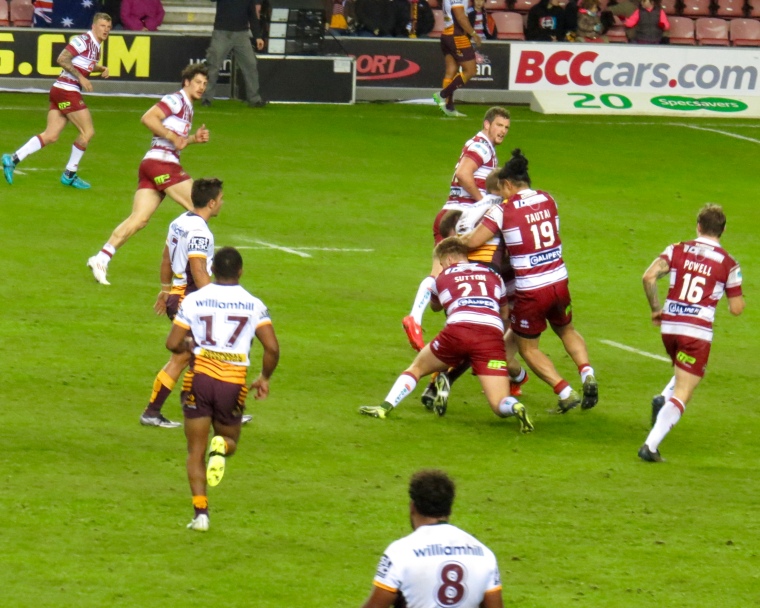 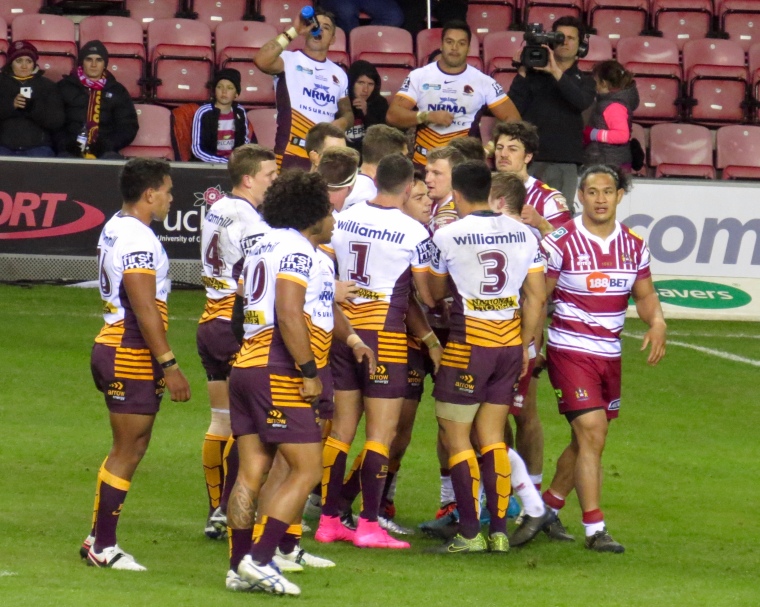 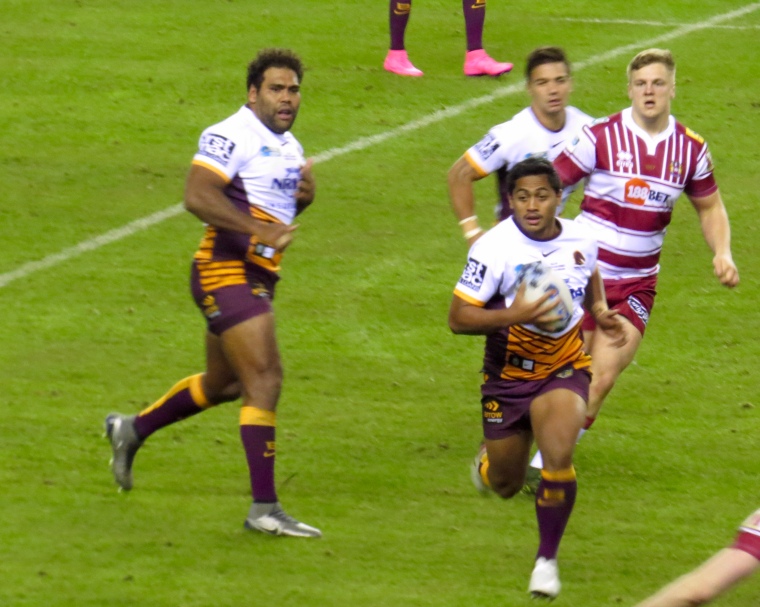 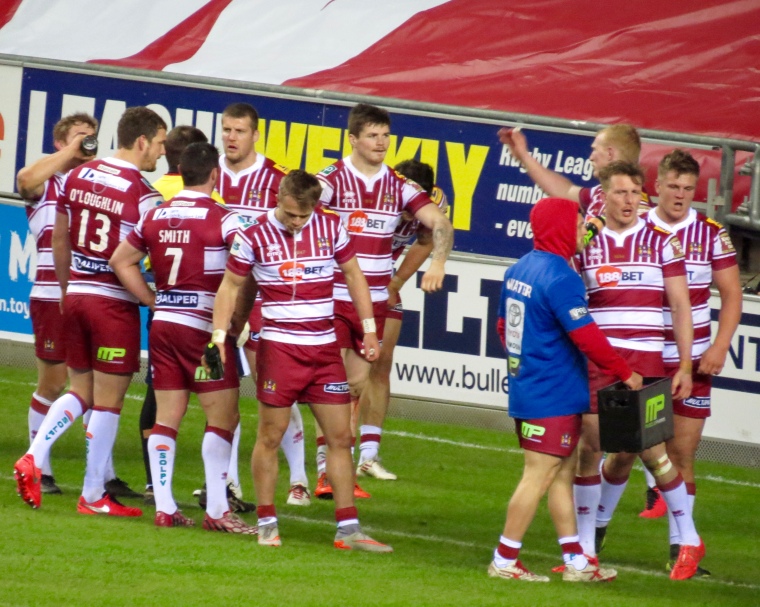 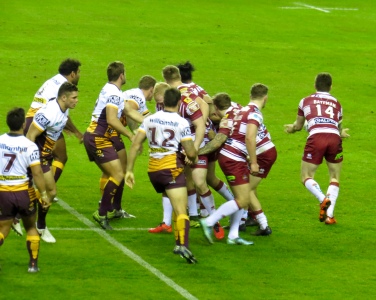 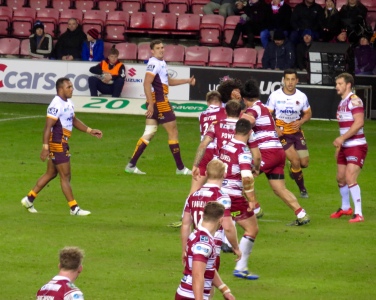