The ballot for the Pakistan Test yielded Day 1 for me and I was able to add Day 4 at a later stage.  I was unsure on how the match would go but felt I’d be seeing a competitive Test.  I’d had many heated conversations about the return of Mohammad Amir; The young Pakistani bowler who’d been involved in the spot fixing scandal in 2010, where he bowled 2 No Balls to order at the very same ground.

There were several who were refusing to attend the games on a point of principle; A wrong way to go for me; Amir was just 18 when he was involved in what was pretty much a scam perpetrated by The News of The World, his captain Salman Butt and senior player Mohammad Asif were also involved.  I can only imagine how an 18 year old felt when his captain asked him to bowl those No Balls.  He was banned for 5 years and spent 3 months in Feltham Young Offenders Institute once the scam was uncovered. 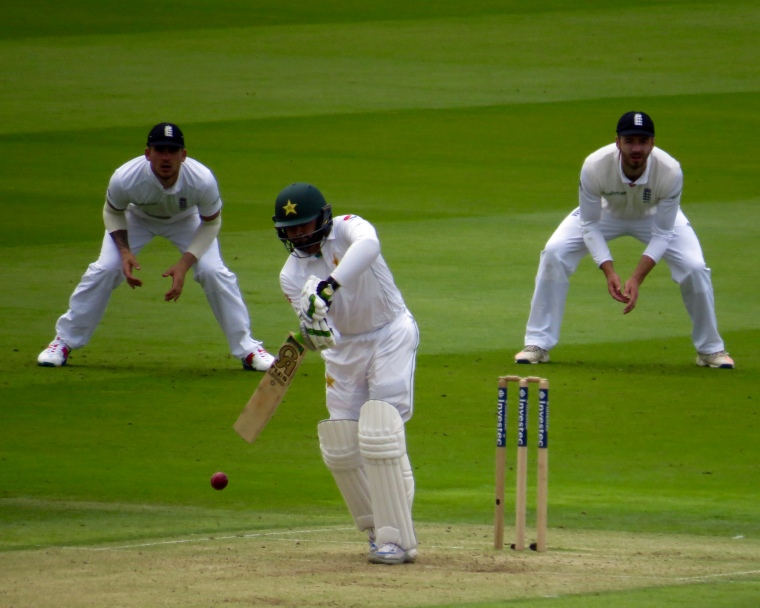 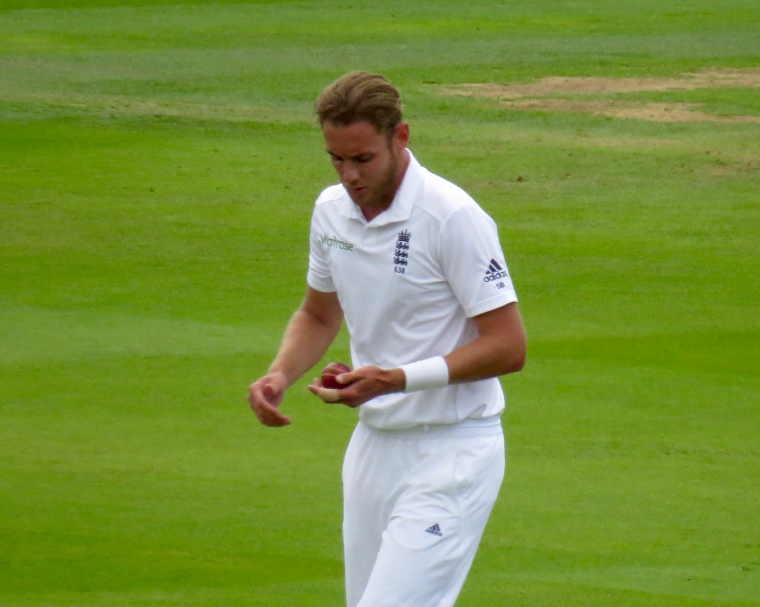 I’m of the belief that he paid a very heavy price for something he did at a very young age and am happy that he’s being given a second chance.  I was hoping the reception he received would be a decent one, rather than the boo’s and cries of cheat that had been promised. 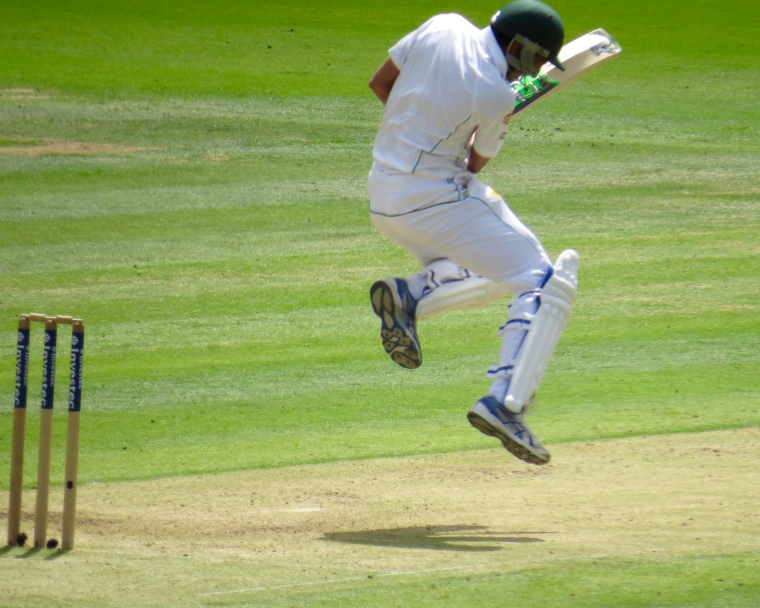 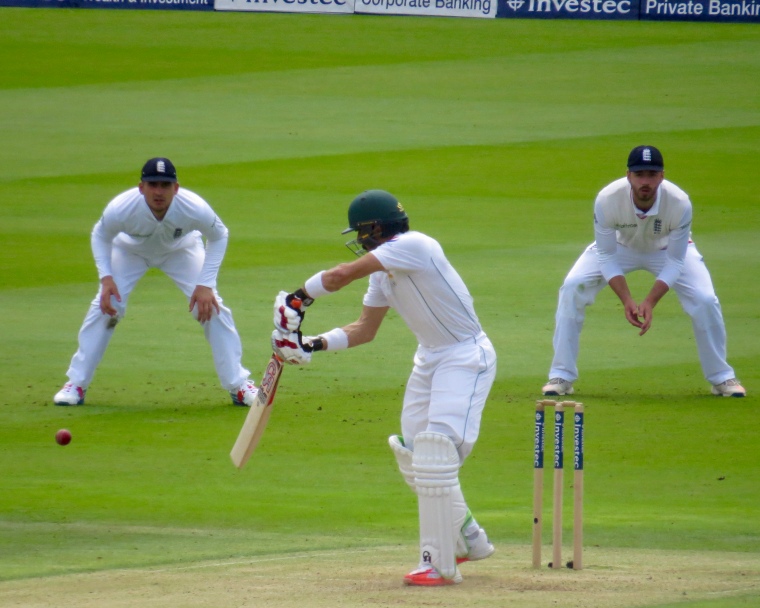 In spite of leaving home in good time I was a few minutes late for the start of the game, so missed the toss and the players walking out.  Amir would wait to face the crowd, Pakistan had won the toss and Misbah had chosen to bat. 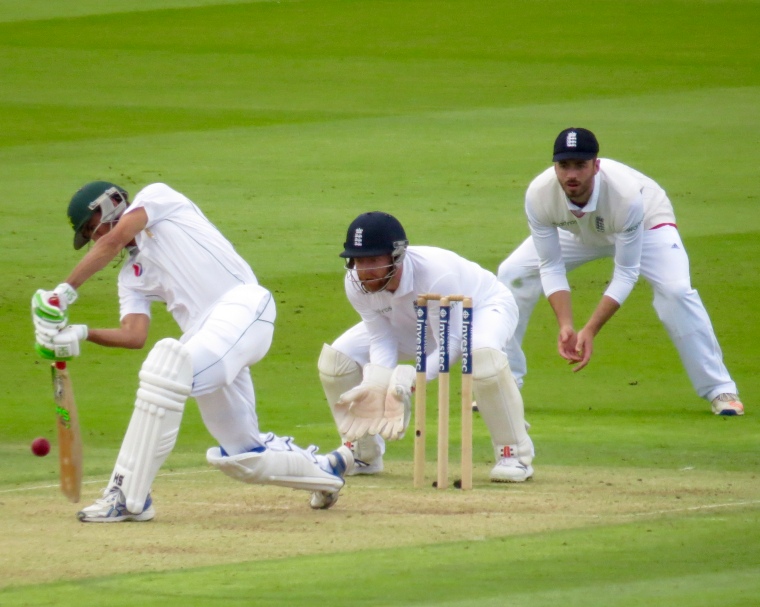 That would prove to be a very good choice for the visitors although things didn’t go according to plan in the beginning.  Mohammad Hafeez and Shan Masood opened the batting and England made an early breakthrough when Masood was caught behind from the bowling of Chris Woakes – Pakistan were 38 for 1 and Masood was out for a disappointing 7. 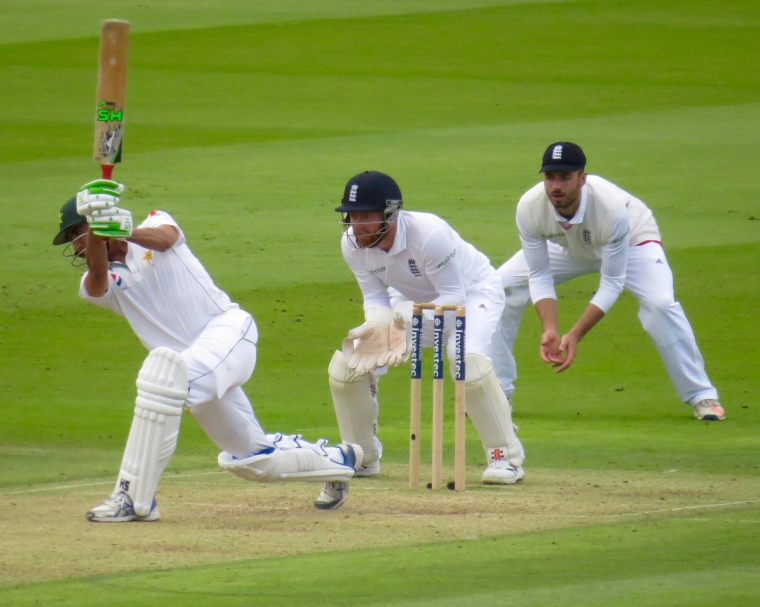 Azhar Ali was in at 3, Hafeez followed his opening partner falling to another cath from Jonny Bairstow, the bowler again Woakes.  Hafeez had made a useful 40 and his team were on 52 for 2.  At this point, things wee looking good for England. 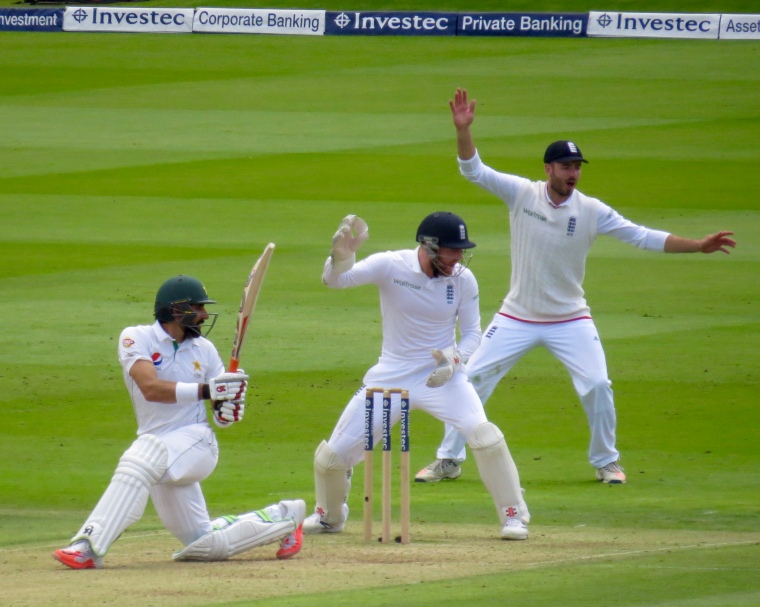 Enter Younus Kahn – he was fascinating to watch, I’m not sure I’ve ever seen footwork like it! His legs were all over the place – He was up in the air as the ball approached his bat, I can only imagine what it looked like to the bowlers facing him, but it was very entertaining to watch! 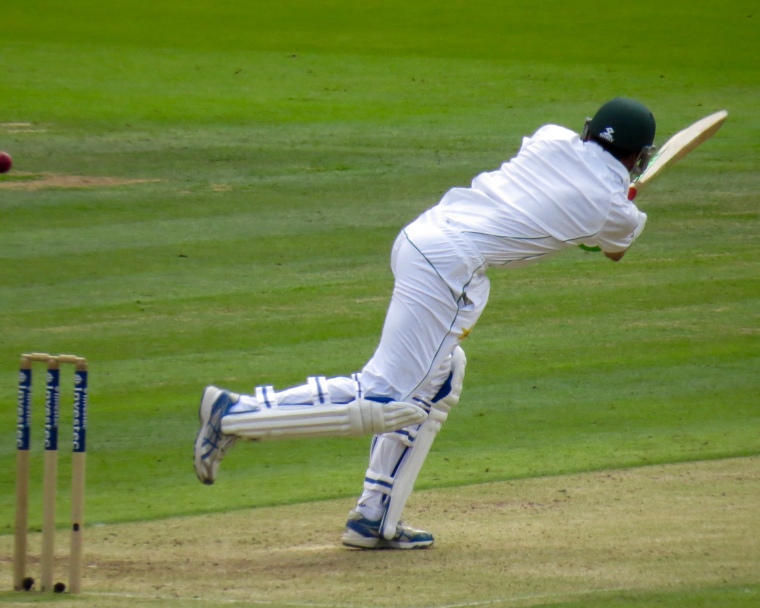 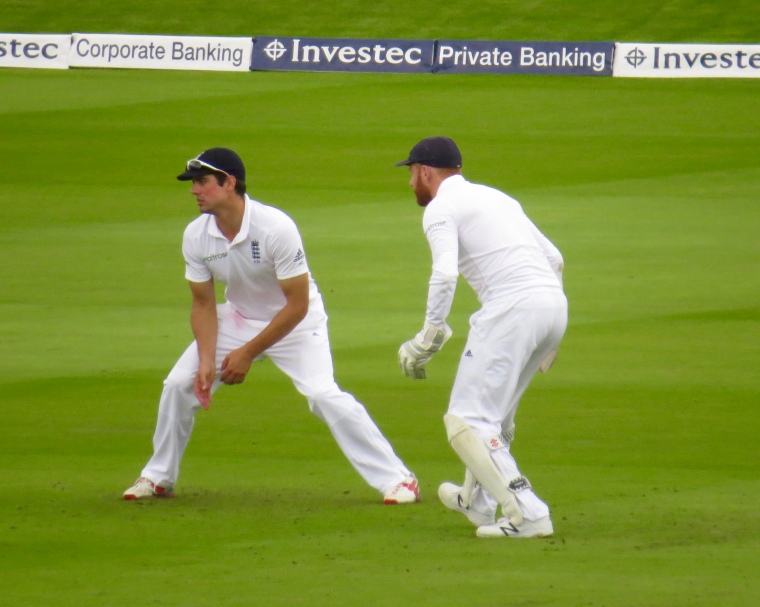 Jacob Ball making his England Debut at Lords took his first wicket when Azhar Ali was deemed to be LBW on 7.  At 77 for 3 things were going awry for Pakistan. 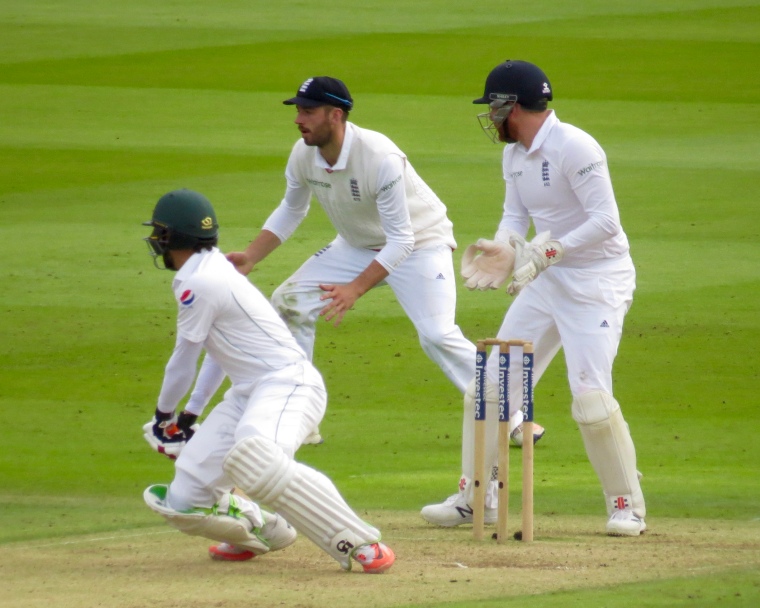 To the rescue came captain Misbah-ul-Haq, who at 42 was making his debut in international cricket in England.  With the 38 year old Younus Kahn at the other end Pakistan’s batsmen had a joint age of 80! 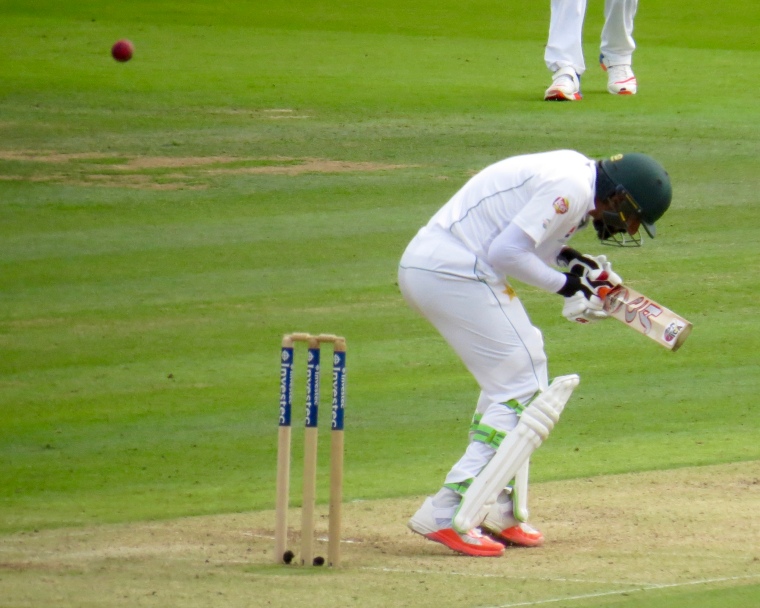 Misbah-ul-Haq’s innings was a delight to behold, he bided his time, building steadily, knowing Alastair Cook would have to introduce Moeen Ali at some stage. More of that later.  Younus Kahn was dismissed by Broad, caught by said Moeen Ali – the pair had added a valuable 57 as well as being great entertainment.  134 for 4 for Pakistan. 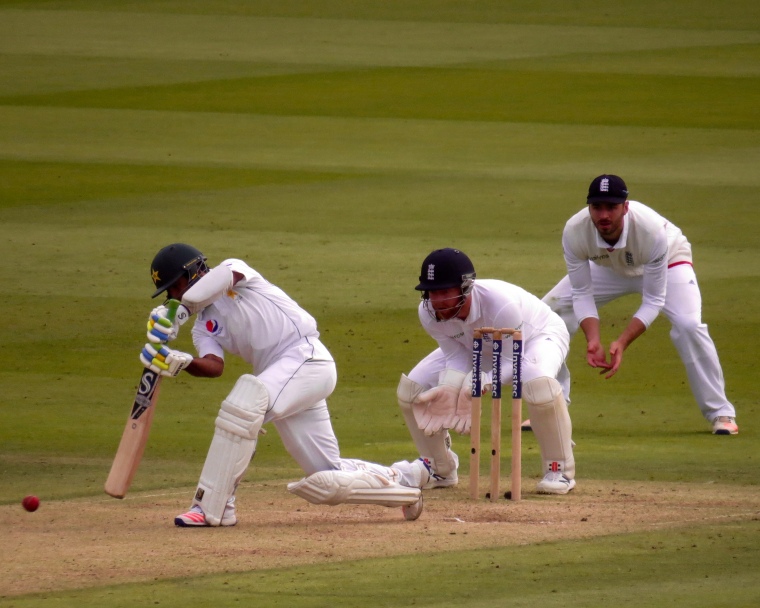 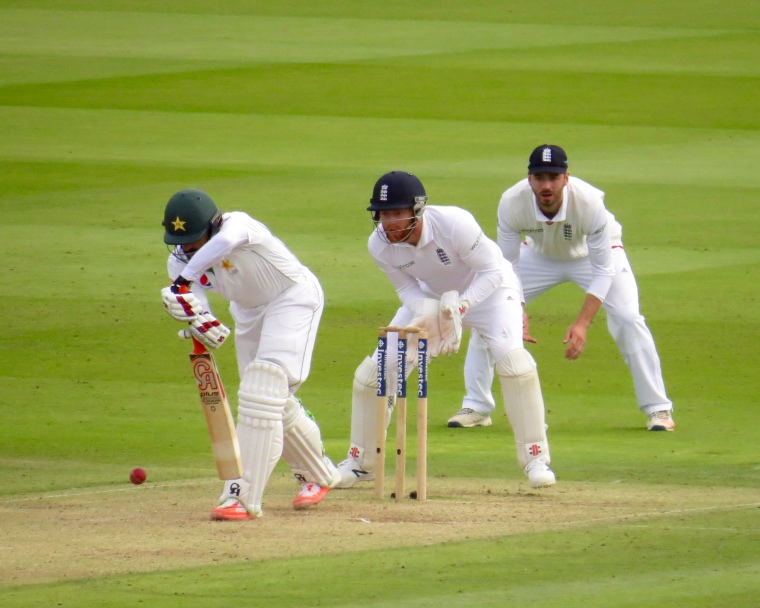 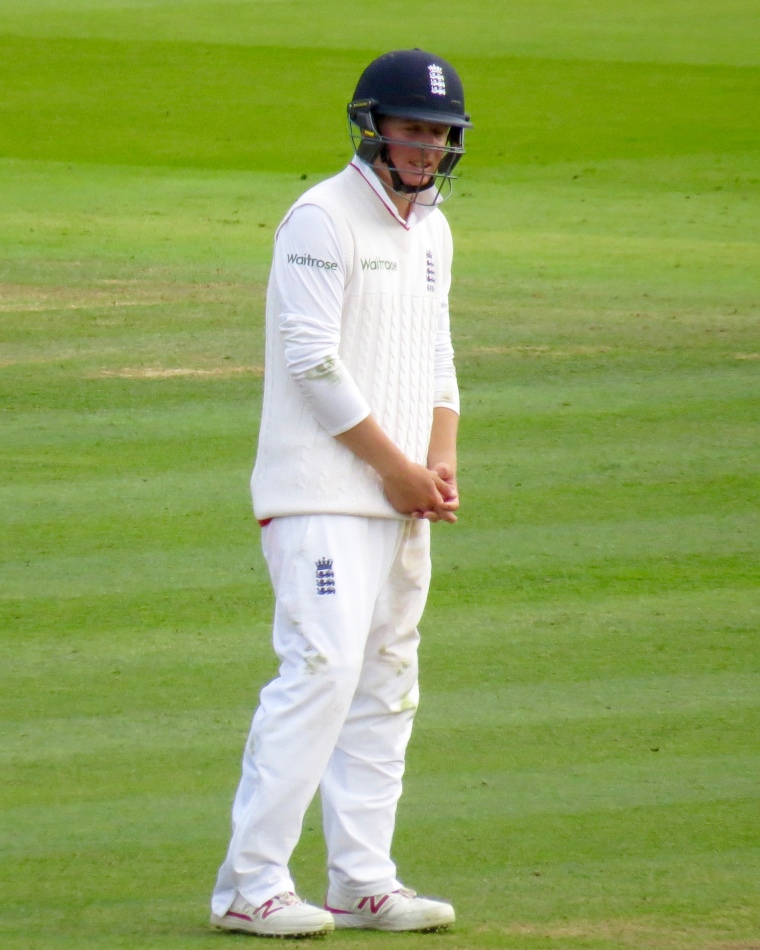 The diminutive Asad Shafiq came in at 6, the captain needed a partner to build a good total and Shafiq was that man.  Standing at just over 5ft 5 he looks very small at the wicket, but he’s another example of skill being key rather than strength or size when it comes to batting. 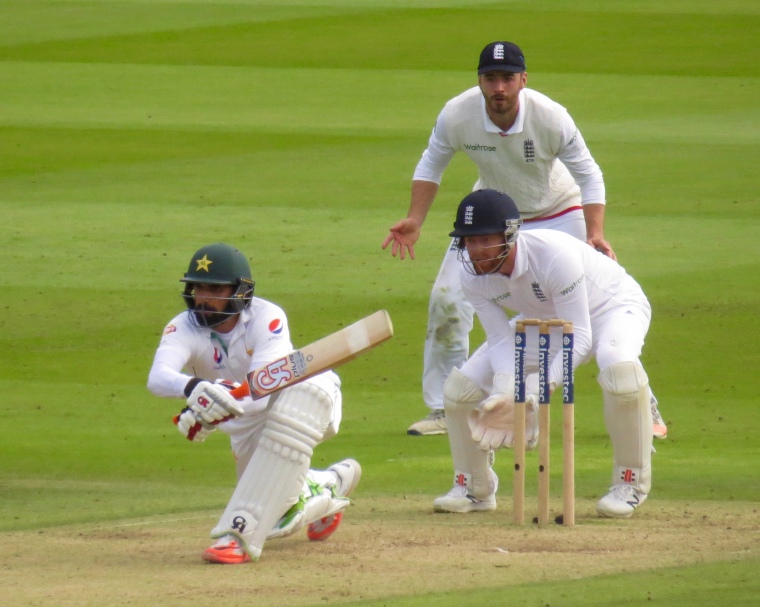 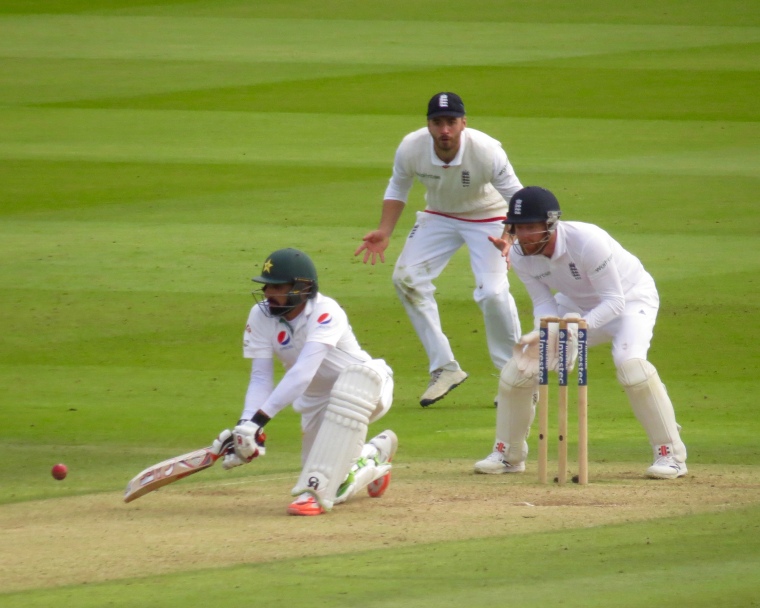 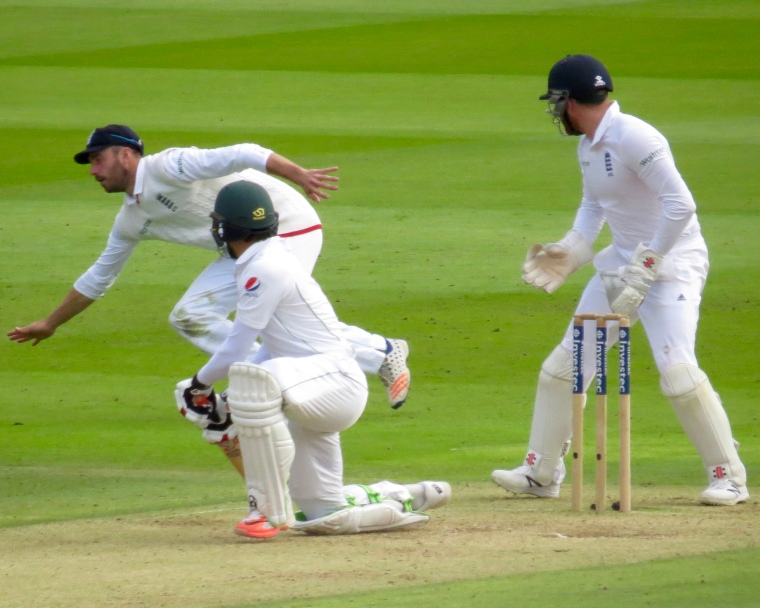 England had a run out chance after tea with both men out of their crease, but Gary Ballance was wide of the stumps with his throw, that was the sort of time you could do with Jason Roy holding that ball, he rarely misses. 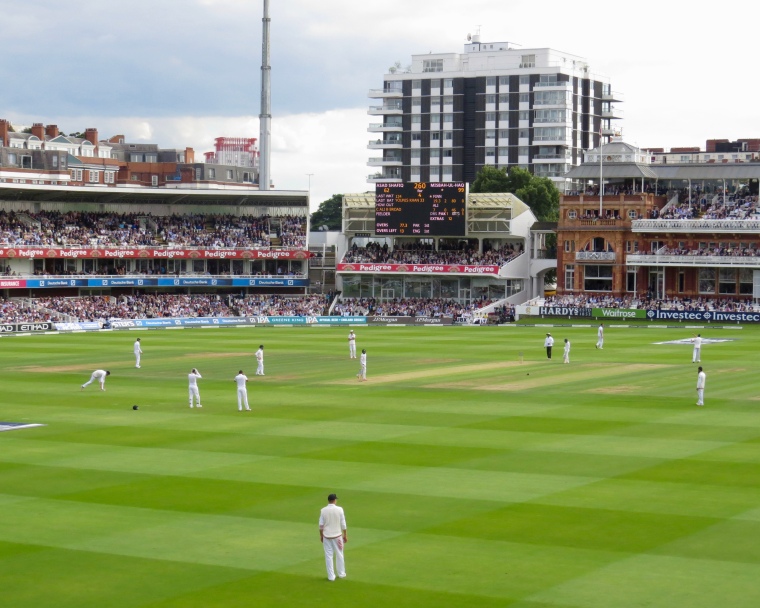 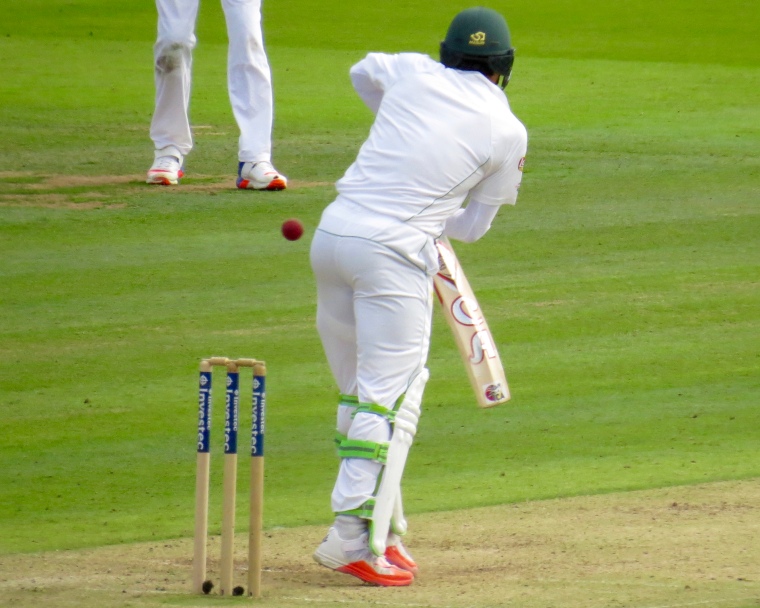 The England bowlers were struggling and it was hard to see where a wicket was going to come from, I think it’s fair to say Jimmy Anderson was missed.

Mooen Ali had the horror of seeing Misbah-ul-Haq hit him for 4 fours in an over, with 3 sweeps as I recall, it didn’t make for pleasant viewing as an England fan.  Another reverse sweep took the Pakistan captain on to 99, would he make that century and get onto the honours board at the first attempt? 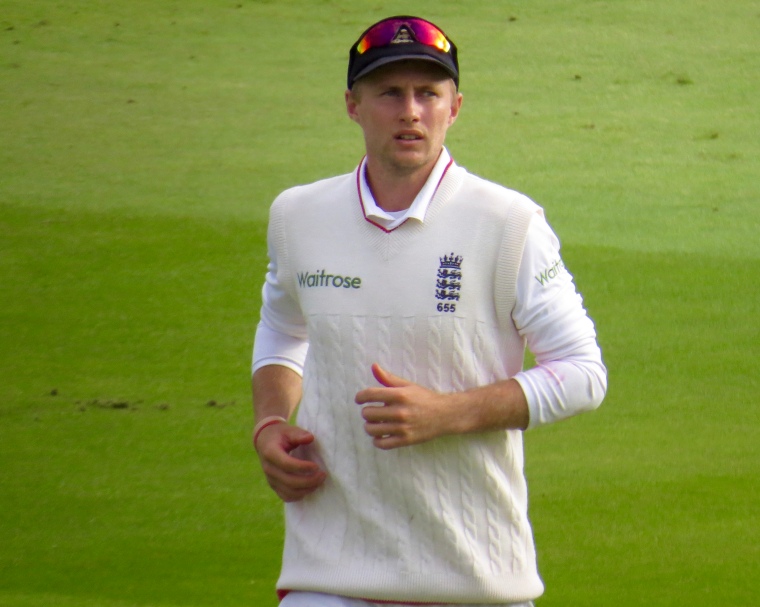 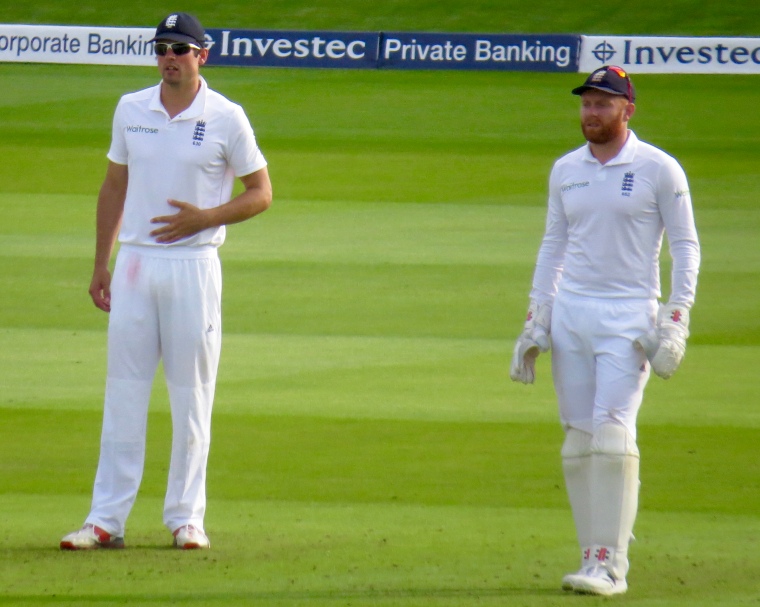 Some canny batting as Steven Finn bowled, who’d had an unhappy day all round, saw him make the century, amazingly Misbah-ul-haq went to his batting partner, Shafique before taking to the ground to do 10 press ups in celebration.

England were having a hard day at the office, but it was Chris Woakes who made a breakthrough taking the wicket of Shafique with his second ball as he replaced Stuart Broad, Jonny Bairstow made the catch, Shafique had made 73.

Rabat Ali came in as night watchman, and became Woakes 4th wicket of the day as he was bowled.  Pakistan finished the day on 282 for 6 with their 42 year old captain on 110 Not Out.  The day belonged to Pakistan.