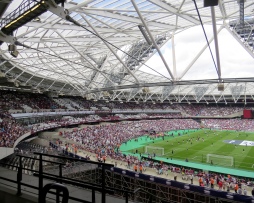 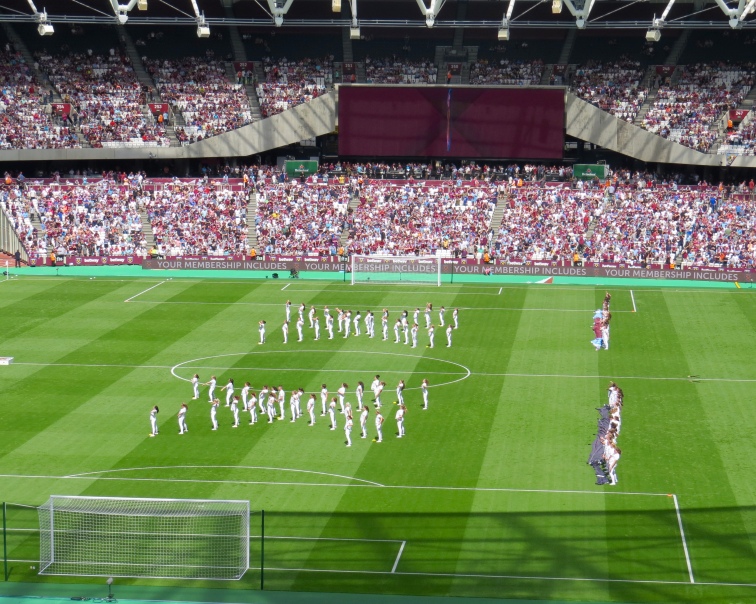 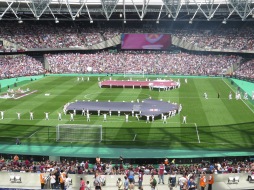 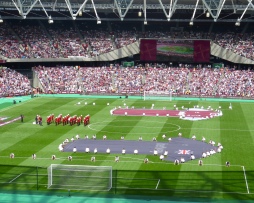 With the new West Ham Stadium, The London Stadium, a short train ride from home it felt like a no brainer to apply for a season ticket.  I paid the initial £10 to get myself on the waiting list, then a further £10 to go through to the next stage.  I had no idea whether I’d end up with that season ticket or not, but it felt worth taking a small chance.  I got the call to say I could go along to the stadium to choose my seat. 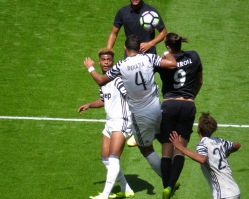 I was in fact taking quite a rick at this stage as I’m a Saracens season ticket holder and they take precedence once the rugby season starts.  I paid £558 for a 2 year season ticket, that works out at less than £15 a game for Premier League Football.  Although football was my first love, this was my first season ticket, I just had to hope things worked out with the Premiership Rugby fixtures. 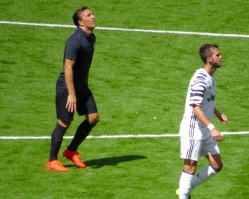 I attended the Premiership Rugby Fixtures launch and did a quick check of Saracens v West Ham – luckily I have only one clash!  That really was a piece of luck!  That luck got better when the opening Premier League fixture was moved from the Saturday to the Sunday, I’d booked the T20 Finals Day for the Saturday as for the first time in a few years it didn’t clash with the Challenge Cup Final – another total result! 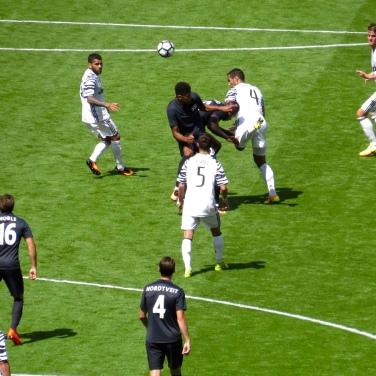 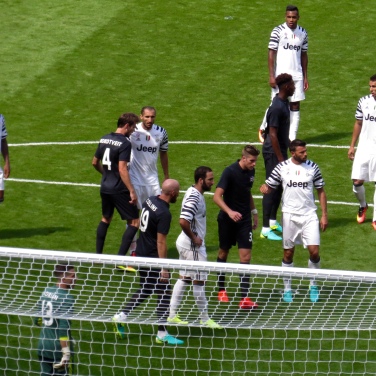 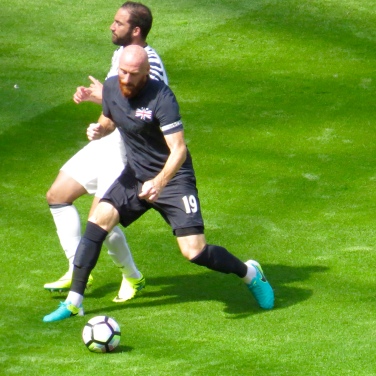 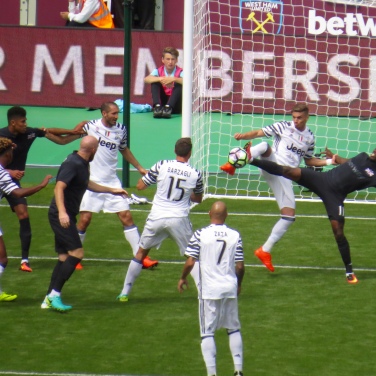 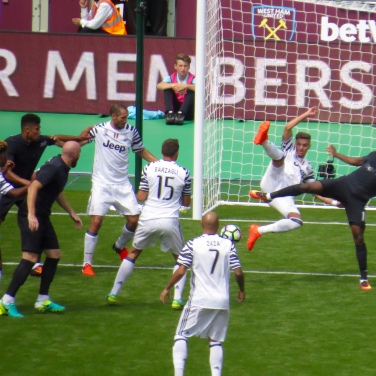 As I’m in catch up mode, this is going to be more about the photos than the match, but, a bit more preamble.  A European game had been played in the stadium but this Juventus match was to be the Opening Ceremony.  I’d received 2 tickets for the game which seemed a bit odd, also a bit of a shame as I didn’t realise I had 2 different seats until I was on my way to the game.  I met my older brother and his 3 sons, 1 of which lives in London, the other 3 had travelled down from Scotland as life long Hammers fans to be at this match. 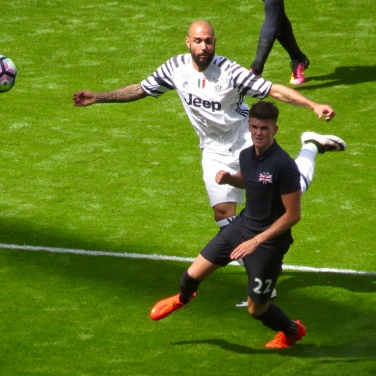 We were sat at opposite ends so split and made our way to our seats, I was lower than my season ticket seat but was happy with what will be my view for the next 2 years; I’d been worried the players would look like stick men, but no, they looked like footballers! 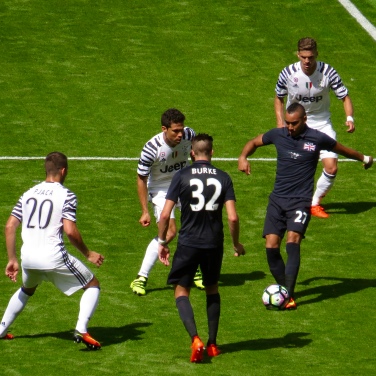 The opening ceremony was well worth seeing, quite razzmatazz as the Bobby Moore and the Trevor Brooking stands were officially named.

One tradition from Upton Park of course remains, the singing of Bubbles as the players emerged, this isn’t something I’ve been doing for years like many of the people in the stadium, but goodness I love it!  I watch a lot of sport, attend a lot of different venues but Bubbles is one of the very best things in sport.  I’m pleased to report it sounded just as good in the London Stadium as it did at Upton Park!

Juventus the Serie A Champions would be formidable opponents and to use an old adage it was a game of 2 halves.  Juventus had the best of the play in the first half and took a two-goal lead following early goals from Paulo Dybala and Mario Mandzukic.  Andy Carroll showed why he’s always a good bet on the pitch with a goal either side of the half time break to even things up.  I was thrilled to get a photo of the second goal, which was at the far end of the pitch. 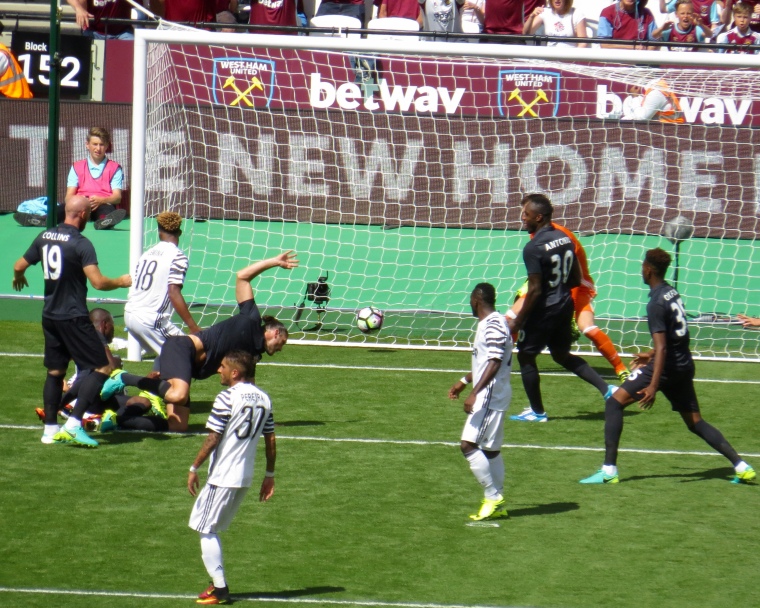 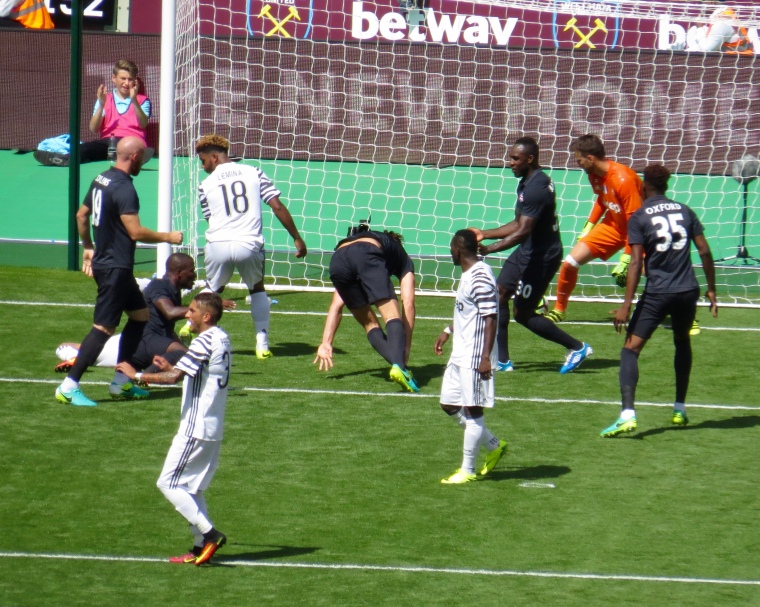 Hopefully they look like footballers and not those stick men!  I’m hoping to get more of the same this season.. Carroll’s a big strong forward, worth having in the box fighting for the ball.

James Collins and Reece Oxford had been brought on in the second half and Collins in particular made a big difference.  The hugely popular Dimitri Payet made an appearance too to the delight of the crowd.

That delight was to be short lived for the hoe crowd as Zaza scored a great goal for the visitors to give them the win.

In spite of the result it was an enjoyable afternoon, the people sitting around me were all very pleasant and equally thrilled to be there on a glorious sunny afternoon, hopefully that feeling will hold when it’s dark and grey throughout the winter.