I’m on a train from Clermont to Paris having had a very convivial weekend with friends watching my team Saracens in the Champions Cup. I feel the need to put […]

I’m on a train from Clermont to Paris having had a very convivial weekend with friends watching my team Saracens in the Champions Cup. I feel the need to put fingers to keyboard after reading about some of the goings on at Welford Road in particular this weekend. Events that are taking place more and more at rugby matches.

I feel I must start by explaining my sport watching history, as a child I was brought up at the side of local cricket pitches as my Dad was a keen player, as I got older running about playing turned into being the scorer, I wasn’t going to miss the action, making teas!

I think my first experience of watching live sport was with my Dad at Lords when Essex were in the Benson & Hedges Final. At 15 I started going to watch Tottenham Hotspur standing with a group of friends, we took an infant school chair along so I could actually see the action, but I can remember one match where I basically just spent 90 minutes trying to stay on my feet! I fully bought into the passion for my team and was Spurs through and through in spite of the rest of the house being Hammers mad! My Dad never took me, just my 2 brothers to Upton Park. There were a couple of matches I wasn’t allowed to go to by the lads, being Manchester United and Millwall, but, I loved my days on that terrace and saw some great footballers play.

International rugby came along for me when I was about 18 and had a rugby playing boyfriend, alcohol was very much a part of the day, but the only imbibing happening during the match was from a flask, it wasn’t the raison d’etre for the day, even if the evening turned into singing rugby songs in pubs in London on the way back to Essex.

Rugby League was the first club rugby I watched, being London Broncos, I was hooked after my first live game and like nothing better than watching the game in the league heartlands, sitting next to people who’ve watched all their lives, there’s a huge social history surrounding that game, generations watch together. I witnessed bad scenes at a Challenge Cup Final a few years ago when Salford played and lost to Castleford. The Salford fans invaded the pitch and behaved appallingly of that there is no question.

I’ve been watching club rugby union since around 2008, starting out with a 6 match ticket for Wasps with a few extras added in before buying a season ticket for Saracens for £89 in 2009, wow they played a different brand of rugby to Wasps at that time, I can recall shouting out boring, boring, at the top of my voice during one match where the Fly Half seemed incapable of passing!

Things have changed in a good way at Saracens, things seem to be changing in a bad way at times amongst crowds at rugby. Rather than rant about things I’ve only read about I’m going to go for things I’ve witnessed.

In 2015 I went to five 6 Nations matches in five countries, I wrote about each match then an impression of each stadium. At that time, Twickenham, in spite of being the home of England rugby, was my least favourite experience and the things that upset/annoyed me then seem to be spreading and growing. Tickets for England matches are hard to come by for many rugby fans, and they seem to be being bought up by more and more who go to booze rather than to watch. As an example I paid £108 to watch England v France in 2016, I genuinely can’t understand why anyone would want to be out of their seat for extended periods of time in order to buy beer or have a wee as a result of so much beer!

A few weeks ago at the England v Australia game I had to say, no you can’t go through, wait for the kick please, as a conversion was being taken. It felt really rude, but I want to see the points scored! Other stadiums aren’t immune, at the
Principality a few weeks ago for the Wales v All Blacks game I had a group of English men who felt it was perfectly fine to swear their way through the game at the top of their voices, there were several children in front of me, and actually I don’t want to hear it. I asked them to stop at half time, it appeared they had no idea they were doing it, unfortunately the biggest culprit had gone for beer so he carried on. In Paris at the Stade de France the beer is non alcohol, so these things tend not to happen, go figure.

And so to club rugby, one of my biggest bug bears are those who truly believe they can see better and are eminently more qualified than the man with the whistle, right in the thick of the action. For four years at Allianz Park I had a father and son duo behind me, according to Dad Saracens never gave a penalty away or knocked on! It’s a game of very small margins, no team is going to participate fully without doing both of those things! It was all I could do to not turn round and tell the man to shut up! There is supporting your team and absolute one eyed bias! Even when presented with clear cut facts after the event many fans think they know better than the referee, TMO, Citing Commissioner and Disciplinary Committee. I would agree that as and when punishments are handed down they can be inconsistent, but they are rarely if ever 100% wrong. You honestly can’t see better from high up in the stands!

There are certain values that are to be safe guarded in rugby and amongst them are the way a crowd behaves. I don’t buy programmes because I was losing too much house room, but I’ve seen a code of conduct at both Harlequins and Leicester Tigers. Below is a copy of an ideal code of conduct for fans from a club known for its traditional values. 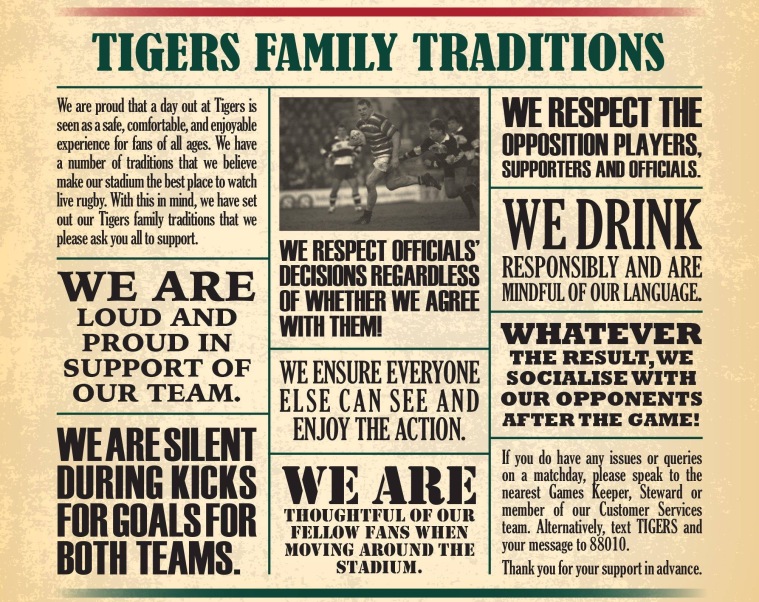 More and more we have booing at decisions and at individual players, at some grounds it’s virtually a boo fest! At the Ricoh Arena earlier this season Joe Marler grabbed James Haskell by his helmet, causing a fierce reaction, both men should have seen yellow, but as is so often the case the retaliator, Haskell, was excluded for 10 minutes while Marler remained. I understand that he caused the scenario, but the ensuing penalty kick happened to a chorus of boo’s and when Joe Marler, England player, went off injured, the boos rang round the stadium again. I was there as a relative neutral and it all just sounded bad to my ears.

The Double European weekends are bound to cause some ‘fire’ I do wonder if that’s the reason the EPCR arrange things this way. There were several bouts of handbag throwing last weekend, as well as several big losses for English teams. That angst certainly carries over to the return fixture, but how much does it affect crowd behaviour?

There was severe annoyance over the postponed Saracens v Clermont match, the communication on the day was very poor and an inflammatory statement from the Clermont President didn’t help matters when many Clermont fans will have made a journey to no avail. Was there a carry over? Well, I’d heard great things about the Clermont crowd and the hospitality before the match was wonderful, as was the build up in the stadium. But wow, they know how to boo in an effort to influence the referee, it made for sarcasm bordering on anger as a Saracens fan, with some of the antics on the pitch not helping. Nick Abendanon went down holding his face at one point, when the  tackle didn’t appear to go anywhere near, Morgan Parra lay down as if he’d been shot after another challenge only to spring up to put the ball into a scrum. How much does that kind of behaviour have an effect on that of the crowd?

The atmosphere leaving the ground was all good, had Clermont lost would it have been the same? I always support home nations over French teams, and should Clermont get to the final with another French team, I won’t be buying their shirt. I have both a Quins and. Gloucester shirt worn at the last 2 Challenge Cup Finals and can see I might end up with a full Premiership Rugby set.

Successful teams are unpopular teams on the whole and some of the nonsense perpetrated by the previous Chief Executive haven’t helped as far as being a Saracens fan is concerned. However at the final in Edinburgh in May a full cup of beer was thrown from above, it gave a lady behind me a full beer shampoo and hit both my camera and an avid young photographer’s sitting next to me, what a terrible thing to do! Leaning over laughing made it all the worse, I do believe those idiots at least were thrown out, but at least one day was ruined by being soaked in beer. I believe far worse was thrown at Welford Road this weekend, and police had to become involved, that should never happen at any sport. BT Sport also filmed abuse being thrown at the referee as he was leaving the pitch, completely unacceptable!

Rugby fans on social media are keen on trotting out the words – this is not football – no it isn’t, it’s rugby and things like this are happening far too often, bad behaviour by people at rugby, football fans watch football, not rugby. Those involved in the game have to get off their high horses and recognise a growing problem before we need a police presence, who don’t just stand and watch the match at rugby grounds.