I took over 2,000 photos during the 3 days fo this match which will take me some time to edit, so I’m going to do the writing first and add […]

I took over 2,000 photos during the 3 days fo this match which will take me some time to edit, so I’m going to do the writing first and add the photos later.

I’d never been to watch cricket at the Worcester New Road ground so was watching with interest the events at the end of the season in Division 2 last summer.  Worcestershire were promoted then the fixture list was kind in placing the match against Essex outside of the England calendar.

I arrived in Worcester the night before the match and had a walk along the river, although I’d been to the Worcester to watch rugby I hadn’t really looked at the city.  Wow, I was wowed!  It’s a stunning place, with history around every corner.  I certainly won’t be going to just watch the rugby then leaving again.

I’d booked the Travelodge opposite the Cathedral so had a short walk the ground, I bought my tickets for the first 3 days, on the basis I’d get no refund if the match finished before Day 4.  I asked where the iconic Cathedral view could be seen and this is where I had a huge piece of luck!  And I must go into why before I write about the actual cricket.

A Worcestershire member, Stan, offered to take me across to the Graeme Hick Pavilion, while that spot did indeed give me the wonderful view of the Cathedral it’s sideways on to the wicket, which really isn’t me preferred view of cricket.  Stan had tole me he’d be sitting in the D’Oliveira Stand with his friends.  I went across to join them and was basically taken in as one of their own I was made to feel so welcome across the match, it made for  really wonderful time!  I learnt a lot about the origin of Worcestershire fans, with many coming from the Black Country, we had many interesting chats and it was lovely to be a part of the group over the 3 days.  5 of us went for a meal on the Saturday evening to an Indian restaurant, RAJKOT, to celebrate Stan’s birthday on the Sunday, I walked there with Mike who filled me in on some of the history of Worcester which was great!  And on the Sunday Stan was kind enough to take me up into the View, which gave a stunning view of the ground.  One disappointment was that the fabled Ladies Pavilion wasn’t open, meaning the legendary cakes weren’t available!  Amazingly one of Stan’s group, Gail, baked a cake to bring to the match on the Sunday, with candle and all.  I did move around the ground as I do, and everyone I met was so friendly, including the odd Essex fan I encountered.

And so to the cricket, Ryan ten Doeschate won the toss and elected to bat, he may have regretted that decision after this team were bowled out for 177.  Alastair Cook batted patiently for over 2 hours to top score with 37, Peter Siddle, who’d impressed with the bat made 29 from 27 balls.  20 year old Josh Tongue impressed and  took 4 for 45 with Essex lasting just 65.1 overs and yet again not gaining a single batting point.  Essex had taken a blow before the game started, well opener Nick Browne had, his finger was broken in a nets session with returning bowler Neil Wagner, he’ll be missed for the 6 weeks he’s likely to be out. 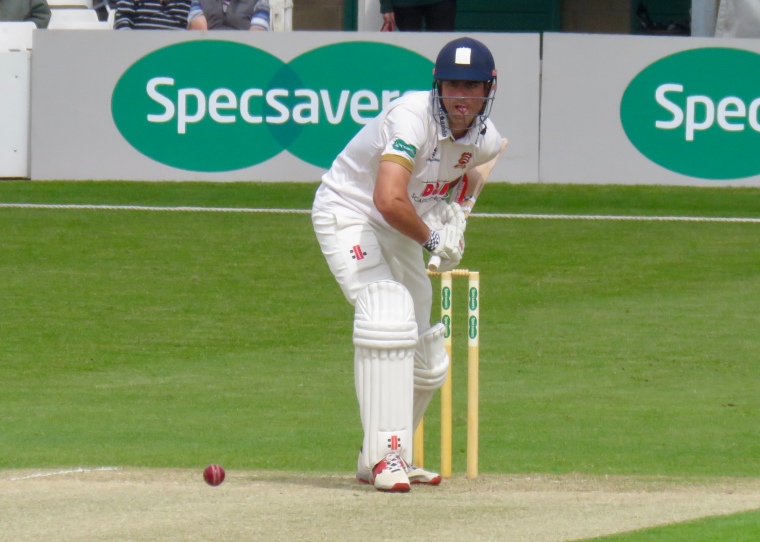 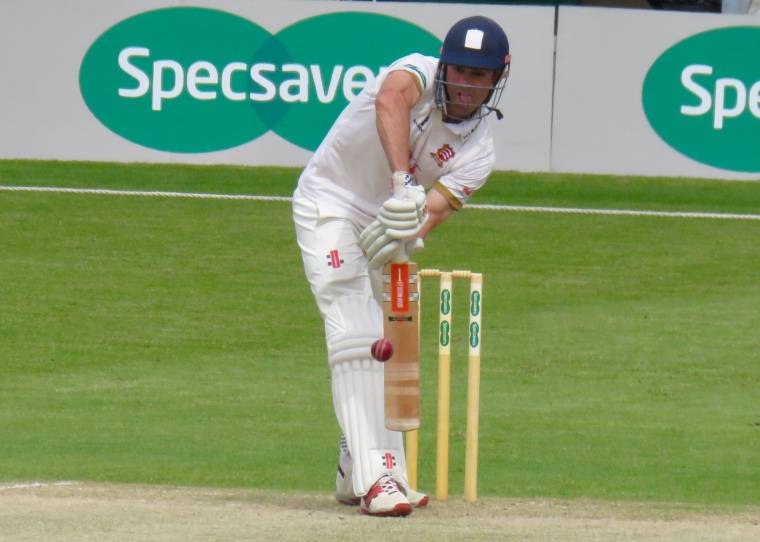 Daryl Mitchell and Brett D’Oliveira got off to a good start before Peter Siddle had D’Oliveira caught by Ravi Bopara for 37, Tom Fell came in at 3 and was following the opener back into the dressing room promptly after being bowled by Jamie Porter.  I’d been asked by several people to keep an eye out for Joe Clarke, he came in at 4 and didn’t disappoint.  He made a very classy 105, as he approaches his 22nd birthday he played a very mature innings to help put his team into a strong position.  He and Mitchell put on 86, but after the 2 openers, Clarke and Tongue with 12  they were the only ones who made double figures.  Worcestershire were all out for 238 a lead of 61.  Ravi Bopara who comes on as a change bowler and who often breaks up partnerships took 3 for 30 including the wicket of Clarke. He’s a young man we should be seeing a lot more of, hopefully in an England shirt.

The Essex batsmen made a better job of things in their second innings, although Tongue started where he’d finished taking the wicket of Varun Chopra for 21.  Alastair Cook and Tom Westley batted well together and Cook looked well set, he’d made a comfortable 66 when 5 swans flew over the pitch, I was certainly distracted, maybe Alastair was as well, he was bowled by Steve Magoffin as the ball just seemed to graze the bails.  But, out he was bringing Dan Lawrence in.  As an Essex fan I was hoping the day would finish with just the 2 wickets down, but Worcs captain Joe Leach had other plans and bowled Tom Westley for 26. 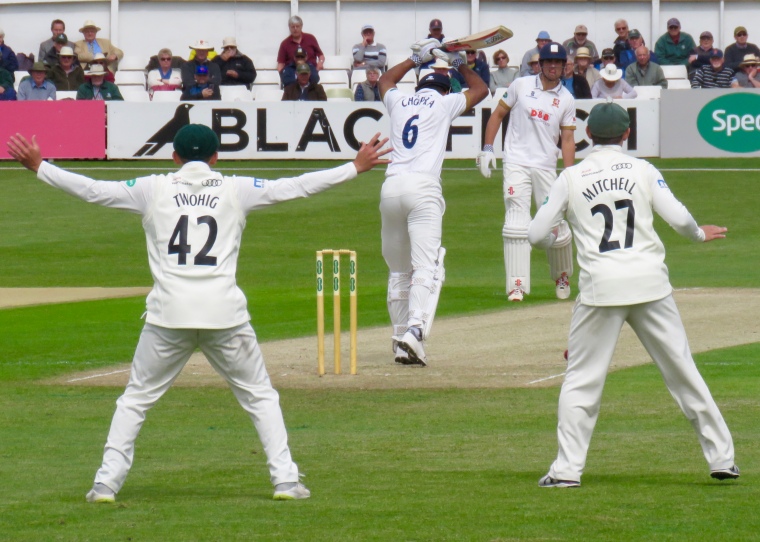 Bad light had stopped play on Day 1, and as night watchman Jamie Porter was walking to the wicket I was hoping it would again. It did seem a little unfair that the tail ender was subjected to front line bowling in the fading light, but, he did well and survived the remaining overs.

Jamie was looking the best I’ve seen him with bat in hand, but was unfortunately run out early the next day.  Dan Lawrence made up for his part in that incident making 71 runs, he really is a delight to watch when he gets into the groove. James Foster made 24 and Simon Harmer 23.  Josh Tongue impressed again and got himself  5 for 53, a deserved landmark for the 20 year old.  Essex were all out for 275, leaving Worcestershire with 215 runs to win the game.

Some say that County Cricket is boring, this was far from it as a win was important for both teams.  It felt like the game was running away from Essex when Travis Head dug in after his team found themselves on 68 for 4.  Peter Siddle took 3 of those wickets and ended the day with 5 for 37.  But it was Simon Harmer who ‘turned’ things around for Essex when it looked like the game was getting away from them.  Ed Barnard had made a fighting 29 before he was bowled by Harmer, who then saw off Twohig and Leach.   Josh Tongue was caught by Harmer from the bowling of Siddle after an ill advised single saw him facing the in form Australian.

Things were getting very tight, it literally was edge of the seat stuff!  Worcestershire needed 33 runs, Essex needed 1 wicket, by this point neither team really deserved to win.   However I confess to being thrilled when Harmer took that final wicket, to my surprise it was Travis Head, he hit a ball virtually straight to Ryan ten Doeschate and the game was won!  19 points to Essex, 4 to Worcestershire.