In this year when I’m going to take every sporting opportunity that comes my way an email from Lords caught my attention.  The email was advising of an MCC Gala […]

In this year when I’m going to take every sporting opportunity that comes my way an email from Lords caught my attention.  The email was advising of an MCC Gala Dinner to be held in the Long Room.  A room that really is so much more than just a room!  It must be one of the most iconic rooms in the world!

The dinner was on a ‘school night’, a Tuesday – I thought for maybe 60 seconds before following the link and paying my money.  It was an opportunity I just couldn’t resist!

I have been lucky enough to watch cricket at Lords in recent years, making 5 Test days last summer, albeit it with 30 school boys in tow for one of those.  That was a day I’ll never forget, they boys had been set up to ask Miss lots of questions – I realised when one such was – Miss?  How long is Moeen Ali’s beard?  I’m relieved to say they did watch the cricket however.

My earliest visit was with my Dad when I was about 15 I think, hard not to fall instantly in love with the place.  I rather carelessly married twice – neither man liked cricket – so it was to be a big gap with no Lords!

I left work nice and early to miss the traffic – it was a bit of a drag to get to St John’s Wood, but a fairly smooth journey and a much better way to get home for a lady alone.  I was able to park behind the Pavilion which was great!  Getting to your car in the dark solo can be a worry. 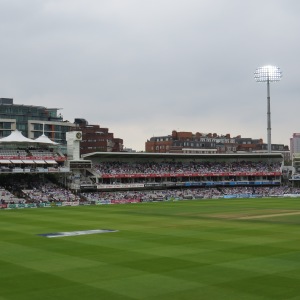 And so I entered the hallowed building – the place has a real aura about it – you can almost feel the history seeping out of its walls.  I was one of the first to arrive and after a decent journey and  too much tea during the day rushed to make use of the ‘facilities’ – I’ll give my Ladies Loos rundown now – Very swish!  Clean, tidy, a nice environment and Molton Brown soap and hand lotion!  I had to make use of both – amazing how difficult it can be to get out of a door with lotion on your hands!

I made my way to the Long Room bar, taking the time to look at the array of paintings on the wall and a couple of ‘exhibits’.  After a short wait I joined the first tour of the Pavilion – the tour was led by Graham Rinaldi (I hope I’ve spelt that right! My phone wanted him to be Ronaldhino!

Graham was great!  It was of course a privilege to get a look at the home dressing room, but his ‘commentary’ really brought the place alive!  We were treated to some great anecdotes and facts and figures as he spoke about several very famous names.

Each player has their own seat, I’d sat myself in Stuart Broad’s spot.  Graham told us how there’s a level of suspicion over which chair is taken.  There are lockers in the middle of the room, but England players aren’t allowed to use them!

So their gear gets laid out or spread about depending on the who and the how.  Graham told the tale of one Mr Cook’s first game for England – he seated himself twice, and was then kicked out by first Matthew Hoggard then Steve Harminson!  A baptism of fire for the young Essex man.

Graham shared a few highlights of the honours boards – Graham Gooch with the highest score of 333 – he scored a further 124 in the same game – amazing stuff!  Ian Botham takes the highest number of mentions being on both bowling and batting boards – 9 times between them. 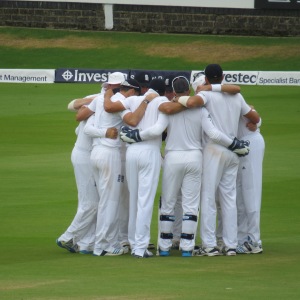 From the changing rooms we walked through the pavilion – there were if I’m honest a few dodgy paintings of ex players – Michael Vaughan for one!   But we were taken to a remarkable painting of one of the greatest cricketers of all times – Sir Vivian Richards – it is stunning!

Next up was the Museum – and of course the original Ashes urn – I had a concept that I’d be seeing something small, but it’s only when the urn is in front of your eyes that you understand just how small and delicate it is.

The term the ‘Ashes’ was first used in 1882 after Australia came to The Oval and beat England for the first time – The Sporting Times printed a mock obituary of English Cricket (a timely thought!) it stated that ‘the body will be cremated and the ashes taken to Australia’ 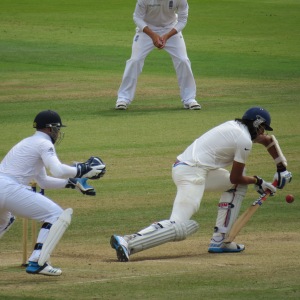 The Ashes as we know it came into being when the small Terracotta urn was printed to the then captain the Hon Ivo Bligh.  However Bligh kept the urn as he’d considered it a personal gift, it remained on his mantelpiece until he died 45 years later.

His wife Florence donated the famous urn to the MCC and so over 75 years later it is ensconced in the museum.  Th urn is too delicate to be handled and so stays put, it was recognised that the teams wanted to compete for a trophy that could be exchanged an urn shaped Waterford Crystal trophy takes the place of the tiny urn. 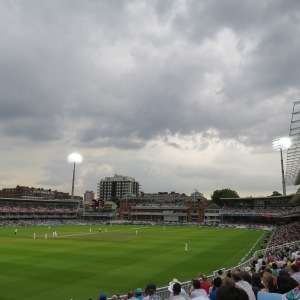 We made our way back to the Pavilion in time for the drinks reception.  I had a chat with a gentleman explaining that I wrote about both codes of rugby – he was mortified!  He told me of a painting of England at Twickenham where there are players missing – those who went across to the 13 man game were painted out!  Amazing the depth of feeling between the 2 codes!

Back to the cricket world – I’d been pleasantly surprised to learn that I’d been seated on the Top Table, a mere 3 seats away from Alastair Cook.  I was sat between 2 very interesting and charming men, and had great conversations with them both.

I was particularly interested to talk to Robert Ebden – Assistant Secretary (Estates) to give him his title.  It was wonderful to hear the enthusiasm in his voice as he spoke about his role and the future exciting plans for Lords.

The meal was delicious – no mean feat when catering to a large group of people – and to be sitting eating in the Long Room was just amazing!  A real privilege – I wondered what my cricket loving Dad would have made of me being there.

We were treated to a Q & A session with Alastair Cook and Clare Taylor after the meal.  The whole thing could have been very awkward, but both Alastair and Clare were very good speakers.  I’ve heard Alastair before, he has a natural ease about him when in the spotlight.  It was good to see him so relaxed, hopefully it will have done his game the world of good to have had a rest. 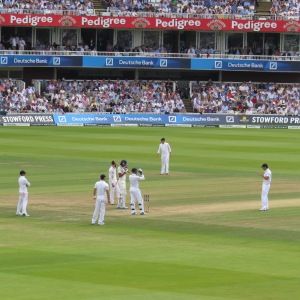 What goes on tour stays on tour the saying goes – both players were honest and forthright especially Alastair – one thing I must write is about the fact that Clare was the Wisden Cricketer of the  Year in 2009!  That really is remarkable – something to be incredibly proud of.

With work the next day I took my leave fairly promptly having had a fantastic evening – I’ll be looking for the same email next year!  The photos I took on the night are from my phone so a bit blurry – any excuse to use some of my summer cricket photos!

No facts and figures for the evening other than the price of the ticket at £110 worth every penny!