Having spent a weekend watching live rugby league it was back to 6 Nations rugby; that meant a trip to Cardiff via Bristol for me.  I’d booked into an Airbnb […]

Having spent a weekend watching live rugby league it was back to 6 Nations rugby; that meant a trip to Cardiff via Bristol for me.  I’d booked into an Airbnb in Cardiff Bay for 2 nights at a very reasonable £80.  What wasn’t so reasonable was that it was cancelled 2 days before my trip!

I’m not one to stress, but that did have me rather perturbed, especially when one of the suggestions from Airbnb was a naturist place!  In March!  Well, at any time of year!  I had to pass.

That meant I was looking for a place to stay with 2 days to go! I booked into the Mercure Bristol North – The Grange Hotel.  I’d stayed there before so knew it was well placed for getting into Cardiff.  An extra £58 however, I was less than pleased.

I had my standard leisurely Friday drive, the road to the West can be a problem (otherwise known as the M4) but the trip went without too much in the way of hold ups.  I arrived at the hotel at around 4pm to find I had a really nice room.

Rather than drive again to find food I had dinner in the hotel, really tasty food, but why oh why do restaurants insist on serving food on a wooden board?  I had a very nice steak, that was pretty cold by the time I got to the end.  Not such a great plan!

I had a good sleep in my huge bed, followed by a decent breakfast to set me up for the day.  One of my ‘colleagues’ from In The Loose, Scottie, lives near to the hotel, we’d never met so it was great to have a chat and put a face to a name, we had a coffee before he set off for work and I set off for Cardiff. 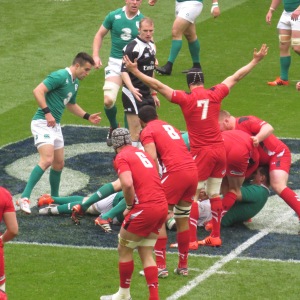 Bristol is within very easy reach of Cardiff, I had thought I’d catch the train, but knowing how difficult it can be to get away from the place I decided to drive.

There is a very efficient Park & Ride available at a mere £6. so much better than paying £17-£18 to park in the centre. 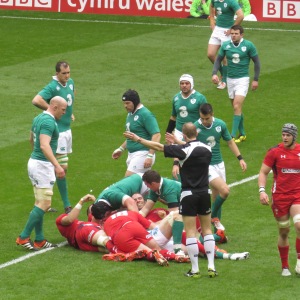 I had a lovely chat on the bus with a few Wales fans, it’s always great to meet like minded enthusiasts!  The ride into town in a quick one, on arrival I went to the Park Inn Hotel to go to the Supporters Bar. 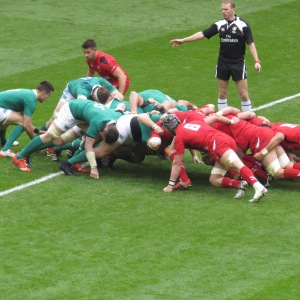 Considering I’m an Essex girl it’s probably a little odd that I’m a Welsh Rugby Gold Member, It is a real indication about how I feel both about The Millennium Stadium and Welsh Rugby.

I’m going to write a piece at the end of the competition about my 5 experiences in 5 countries so won’t say too much here. 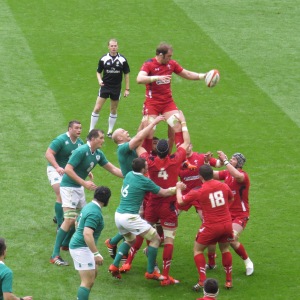 That membership gave me access to a members bar, the place was buzzing and very full, but I managed to find myself a free chair on a table.  The event was great fun, with TRM Music providing the songs and then Rhys Morris swapped from singing to the MC’ing of a quiz. 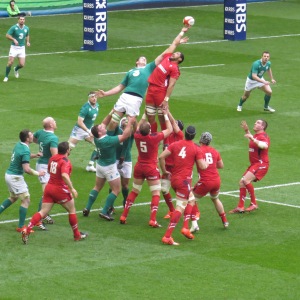 The quiz was I have to say pretty funny, not least when one very colourful contestant clearly recognised certain players by their legs alone! I shared a table with a group of people who were really good friends, one such @Welshbird , now a Twitter friend really should have gone into the quiz!  She knew all the answers!

I was determined to take in every bit of atmosphere on offer at the Millennium so made my way there nice and early.  It was a cold day and I’m going to make an observation here – I’ve never seen so many unsuitably dressed girls in one place!

Scantily dressed on a freezing day is crazy!  I saw one girl who was literally a mass of goose bumps!  I believe Newcastle people are hardy – I’m not sure they can compete with Cardiff girls! 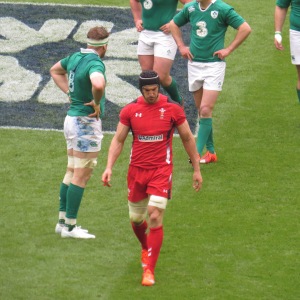 The stadium is in the heart of the city, there was a very good natured vibe as I walked through passing bars and restaurants. In spite of having been several times I’m still getting used to the layout of the Millennium.  I was ecstatic to find my seat on the middle tier not far from the halfway line and a mere 5 rows back.  I had a brilliant view!

From the moment I stepped into the stadium I could feel the magic, A young couple in front of me were trying to take a selfie, so I took a photo for them.  it was their first experience of a rugby match, what a game to pick!

One of the best things about the Millennium really is the Welsh Male Voice Choir – I recall a conversation I had last summer with a Yorkshire man who told me – ‘you know the Welsh can’t sing in tune’  It was all I could do not to laugh out loud! 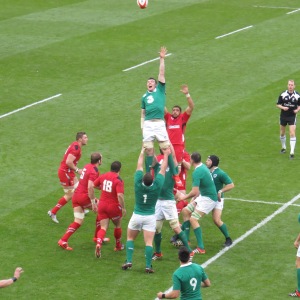 I believe my response was – we’ll have to agree to disagree on that one! I was to say the least gob smacked!  And wow I can confirm just how wrong he was.

With Delilah, having been banned, apparently it’s about a woman who’s been abused, my favourite pre anthems song is Bread of Heaven, magical every time.

The roof was open for the game, but it failed to dim the wonderful atmosphere as the teams emerged.  Both Paul O’Connell on 100 Caps and Jonny Sexton on 50 Caps were given due respect as they emerged one after the other. 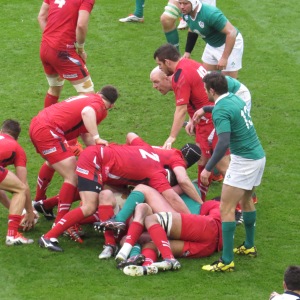 Similarly Sam Warburton with a record number of appearances as Wales Captain on 34.  Two wonderful anthems were sung in a way they can only be sung with a Male Voice Choir belong them both out. 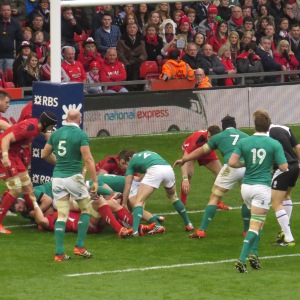 I sang both – well, sort of when it came to the Welsh anthem and cheered along with everybody else in the place as the teams took their place.

There will be a lot written about the actual game, and this isn’t a match report, but I do have to write a little.  A longer than usual blog!

Wales took Ireland by surprise early on, scoring 3 penalties within the first 12 minutes.  The immaculate Leigh Halfpenny is such an accurate kicker from pretty much all over the field. 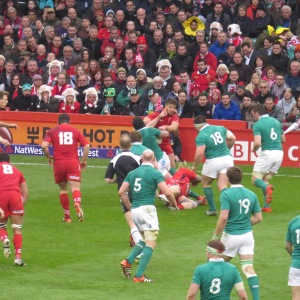 Jonny Sexton kicked the ball out on the full from the restart after the 2nd penalty, an uncharacteristic error, he also missed his first shot at goal.

I can feel myself going into match report mode here, so I must put a halt on.  Wales played with great heart, having gone ahead by 20 points t 9 after a Scott Williams try they defended their lines with an immense effort. They also spent 10 minutes without Sam Warburton and saw Jonathan Davies yellow carded too. 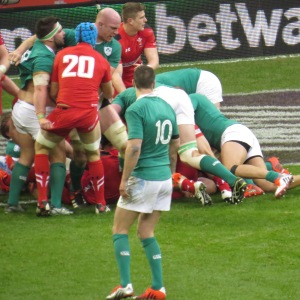 Ireland were awarded a penalty try after Wales pulled down a maul on their line, this closed the gap to 4, giving us a very tense final 7 minutes.  Paul O’Connell showed great leadership during the game, he really is a lion amongst men when it comes to playing for his country.

Leigh Halfpenny scored a further penalty taking the score to its final position of Wales 23 Ireland 16.  As I’d expected before the 6 Nations started there will be no Grand Slam in 2015.

I left the stadium after watching the Welsh team walk the circuit of the pitch and headed back to the Park Inn where I watched England beat Scotland.  I’d say I was one of maybe 10 people at most who wanted the men in white to win, but win they did!  That result sees England sit at the top of the table.  We may see some points scored next week!

A few facts and figures

A 40 minute drive back to my hotel followed by a very chilled evening – I had a wonderful day!  Favourite song of both journeys – Jamie Woon – Night Air.  I really recommend a listen!