With the 6 Nations and my gallivanting done it was time to return to Premiership Rugby and Saracens.  In what has become a tradition they faced their opponents Harlequins at […]

With the 6 Nations and my gallivanting done it was time to return to Premiership Rugby and Saracens.  In what has become a tradition they faced their opponents Harlequins at Wembley. 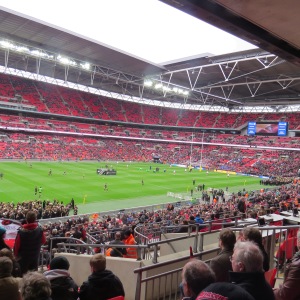 Having changed my mind all week about how I was going to travel car was the option when it came to the day.  In a bid to improve the train line there are no weekend trains from Chelmsford which makes what should be a relatively easy journey by train into a bit of a nightmare.

I had company for this trip but as a woman alone I always have to be mindful of how the journey’s likely to go.

Unusually I’d booked a room at The Hilton Hotel opposite the stadium, making the driving option more attractive again. 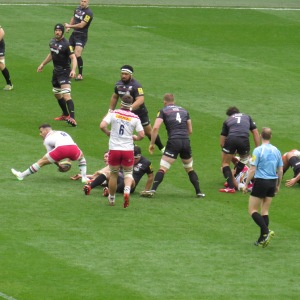 The journey was a fairly smooth one in spite of the M25 being shut.  Taking the M11/A406 option saved us from sitting for hours.

The hotel has parking available for £15 a night, it was pretty amazing to note that had you not been staying in the hotel you’d have needed a mortgage to pay for the parking!  Take a train is my advice!

The ‘event’ started with a very convivial lunch at Las Iguanas in the shopping complex at Wembley with a group of Saracens friends to celebrate one of our number’s birthday – Tracey had a fun time and lots of cake! 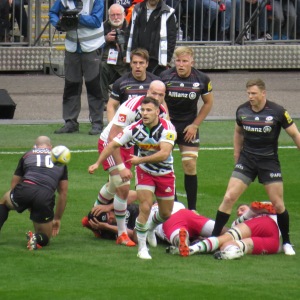 With lunch over it was time to head to the Stadium – Wembley is an impressive structure, the arch taking over admirably from the towers that graced Old Wembley.But the view and experience can be varied. 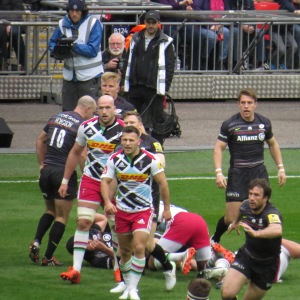 I’d had a bit of a mix up with my ticket; I thought I was part of a group request but found out with just over a week to go that wasn’t the case.

It meant a last minute phone call, the game forms part of my season ticket, I had a disappointing seat if I’m honest.

I was sat next to the media area on the lower tier, the ‘roofs’ are very low and the gradient not very steep.  It can give a feeling of being penned in, and make finding a good view a challenge.

Another challenge was not being rude to the drinkers that constantly walked past in their quest for beer or the loo.  This reads a bit lie my Twickenham experience – because it was!  Another event when it can feel rather more about the alcohol than the rugby. 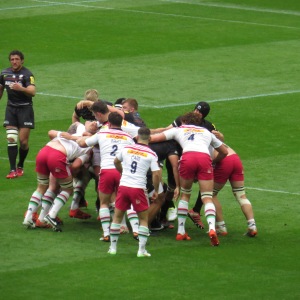 As is always the way at Wembley there was pre-match entertainment – this time in the  form of Pixie Lott – a good artist – the acoustics were so bad it was very hard to hear a word she was singing!

My next task is to write a match report for the game – so a brief summary here.

The game didn’t quite start as planned for the ‘home’ team – a clearing box kick by Neil De Kock was charged down by Jack Clifford of Quins – who silenced the crowd as he ran in to score!. 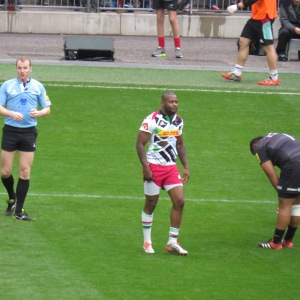 His is definitely a name to keep an eye on – Quins have a habit of producing great back row players.

Ugo Monye having announced his intention to retire at the end of the season, had a forced 10 minute retirement from the game early on.  I suspect Mr Wayne Barnes isn’t great friends with Quins – especially after binning 3 of their forwards against Bath.

Saracens played the game with some intent scoring 5 tries in total, with Chris Ashton scoring 2 and Chris Wyles, who seems to shine wherever he’s asked to play adding 2 of his own.

Both sets of forwards put in a lot of work and Billy Vunipola scored one for the big boys with the last play of the game.

Saracens boasted a record crowd of 84,068 for the game, I’m not entirely sure how kosher that number was, there was a choir and dancing group with large numbers.  But, what Saracens do at Wembley is to be admired.

A few facts and figures from the day:

I didn’t use the ladies loos – the joys of having a hotel room nearby!

I waited for the players to do the round of the pitch, having a chat to Don Barrell and his lovely wife – they had their very gorgeous 5 week old baby boy with them.  Don had been a very big baby, his son 81b 10 and early!  Heaven help his wife for number 2!

We had part 2 of Tracey’s birthday celebrations with a very tasty dinner – with wine – almost unheard of for me!  And very nice it was too – lots of laughter which is always a good thing!

The hotel room was quite swish with a comfortable bed – and a pretty decent nights sleep.  I’ve never seen such a busy restaurant for breakfast and things were slightly chaotic.  But. breakfast was consumed and after a lazy morning it was time to head home.

The journey was a good one in spite of the rain – next stop Paris as far as Saracens are concerned – a wonderful coincidence that my lovely daughter lives there!