Easter Monday means rugby league, if fixtures fall right, and this year they most certainly did!  Batley Bulldogs travelled to play London Broncos. Batley have a long and rich history, […]

Easter Monday means rugby league, if fixtures fall right, and this year they most certainly did!  Batley Bulldogs travelled to play London Broncos.

Batley have a long and rich history, coming into being in the 1880’s;  they were one of the original 20 clubs to break away at the famous meeting in the George Hotel in Huddersfield.

They play their games in the newly named Fox’s Biscuits Stadium nestled between Huddersfield and Leeds in West Yorkshire.  So, a reasonable journey for the team and their die hard fans.

My journey was a little different than usual, I had to get myself home from Paris before I could make my way to The Hive.  I’d booked the Eurostar for 9:10am to make sure I got home in plenty of time.

I left my daughter at about 8am French time and arrived at my door just over 4 hours later.  My Eurostar journey was a delight having decided to travel in Standard Premier I was served a pretty decent croissant stylie breakfast.  I even ate the fruit and yoghurt too!

A quick charge of my camera battery and IPad and off I went to – I’m not too sure where!  Edgware maybe?

In spite of it being Easter Monday the trip was smooth – apart from a van driver who tried to wipe the front of my car out – he actually apologised as I was calling him a name as I drove past – a tad embarrassing.

The M25 had it’s standard, there must be glass in the 2 inside lanes drivers, but the roads were surprisingly quiet.

I arrived a good hour before the match was due to start and joined my friend Richard watching Barnet play Dartford at that round ball game.  A key game for both teams Barnet were, after many nervous moments winners with a solitary goal. 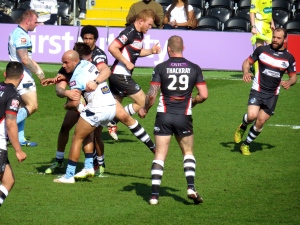 I may have said in a previous Broncos blog, but the food on offer at The Hive can be reasonably healthy as well as comprising of the usual beef burgers and chips option.  I had half a baguette (oh and crisps) it makes a pleasant change to be able to have non fried food!

I’d been a bit shocked to hear that Mark and Kate Rammond staunch Broncos fans had been in a bad car accident on their way to watch the team play Featherstone Rovers.  A win from the home team would cheer them both up no end!

As per usual I am going to write a match report for In The Loose so not too much detail about the game – but, here’s a taster. 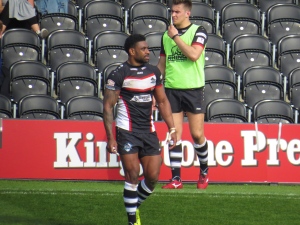 Broncos had been faring well at home, having had 3 from 3 – away form had been somewhat different with a win against Featherstone being their 1st away win this season.  (They had no away wins in 2014!) 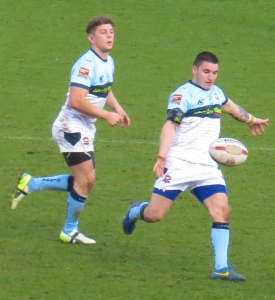 As has always been the case Batley looked pretty huge in comparison to Broncos particularly in the Forwards.

What I’m about to type next is going to look a little odd – the 1st half was a pretty even affair – yet Broncos took their chances and went in at half time having scored 3 tries.  With Matt Garside, Daniel Harrison and Ben Helliwell each scoring a 4 pointer.  Wes Naiqama converted 2 of them, Oscar Thomas the other. 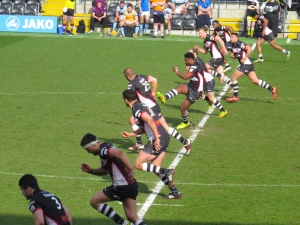 Next up was Elliot Minchella for Broncos, scoring a great try on his debut, Wes Naqaima added the score to London Broncos 18 Batley Bulldogs 6.

Batley were in determined mode and had a lot of possession of the ball – that pressure led to tries on both the 71st and 75th minute with Wayne Rettie scoring a typical wingers try – converted by Southerwood with a great kick.

Sean Hesketh scored Batley’s 3rd try of the half, Southerwood was again successful with the conversion.  Taking the score to London Broncos 24 Batley Bulldogs 18.

A drop goal scored by Oscar Thomas gave Broncos a 2 score gap that Batley couldn’t, despite a lot of effort close.  Another home win for London to the delight of the home fans- final score – Broncos 25 Bulldogs 18.

I throughly enjoyed the game – I’ve decided I shout a whole lot more at rugby league than I do union, in the case of this game, the referee made a few dodgy decisions that may have ‘made’ me yell even more! 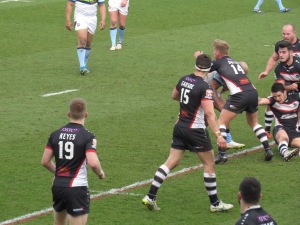 In spite of being amongst the beer etc I didn’t find out the prices – I bought a cuppa which I believe was £2.00 and a pint of beer – with the total being £5 something – so I’m thinking the beer was reasonable!

Lots more about the game in my upcoming match report.