After the glamour of Paris it was back to Premiership Rugby and back to Allianz Park.  The season seems to be flying by and this was a key game. I’ve […]

After the glamour of Paris it was back to Premiership Rugby and back to Allianz Park.  The season seems to be flying by and this was a key game. 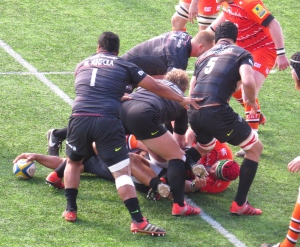 I’ve been ‘on holiday’ for the Easter period – I honestly have no idea how I manage to get myself organised, dressed and out the door for work in the mornings. 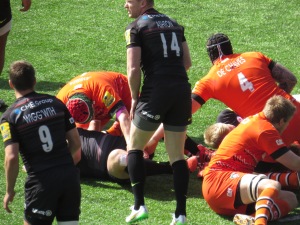 I’ve managed to waste hours on end, mostly messing about on social media, doing a bit of writing and ‘enhancing’ some of the photos I’ve taken over the last year.  Relaxing might be the best description.

The weather had been pretty great and I was hoping for the same for the afternoon, a group of friends had arranged a picnic – with home made things!  I did ask for clarification of what make meant but still couldn’t quite grasp it! 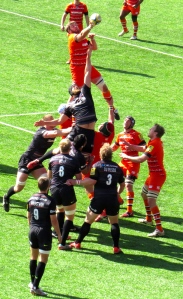 The journey to Mill Hill was a smooth one – just the usual 3rd lane drivers – I’m in this lane and I’m staying there no matter what!  Yep – it drives me crazy each and every time!

I went to get my contribution for the home-made picnic from M & S – I just don’t do the whole cooking thing, much as I love to eat it.

Allianz Park is a bit of a palaver to get to – I won’t pay £240 a year to park there so I park at the station then walk across to get the shuttle bus.  It’s a short journey then a walk through to the ground.  I’ve said before I think, that’s ok in the daylight, not good at night. 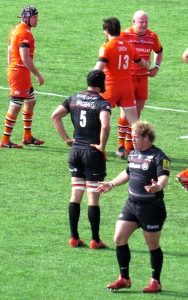 I arrived in plenty of time to find the picnic in full flow – it’s a good job my Sarries friends know me well, they laughed at my contribution – but in a good natured way. 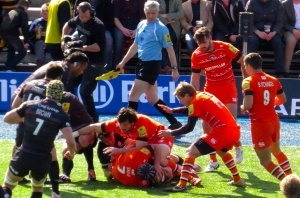 The home made stuff was lovely – I just wish a had the inclination to make such delights as Chicken Satay, Hummus, Shortbread, Cinnamon Buns, wonderful things galore! 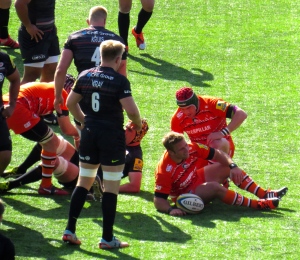 But, I have not even a tiny interest in actually making anything when it comes to food – I’d rather be watching sport, exercising or writing – makes me a very bad prospect I reckon! 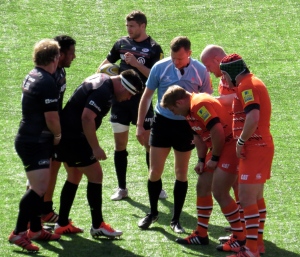 Food eaten we all headed to our seats – in a capacity crowd I had a line of empty seats next to me which seemed a bit odd – perhaps I smell!  There were a fair few season ticket holders missing it seemed – I wonder if they count them in the crowd numbers?

This was a key game with 3rd (After a 5 point win for Bath) and 4th playing each other.  Leicester had a few very dodgy games at the start of the season with one such being a a veritable drubbing by Bath who scored 45 to Tigers zero!

However this is Leicester Tigers we’re talking about and they tend to come good at the business end of the season. 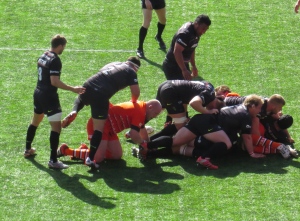 With a match report to follow – I really will this time, for some reason I haven’t wanted to watch the Racing Metro game again – but I need to see more of the detail of this game – I won’t go into too much detail here. 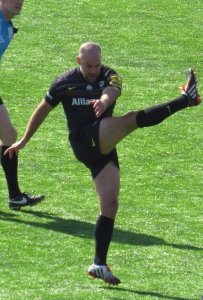 The 1st half was far too dis-jointed – the referee’s whistle seemed to be a big feature, with many of the penalties being awarded against Saracens. 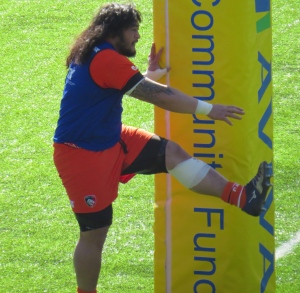 Freddie Burns converted 2 of those penalties to put his team 6 nil ahead after 11 minutes.  It was quite hard to see where the nest score was going to come from after that.

It was to be Billy Vunipola who put his team on the scoreboard on the stroke of half time – Tom Youngs had been sent to think about things for 10 minutes after he obstructed Chris Ashton on the Tigers line. 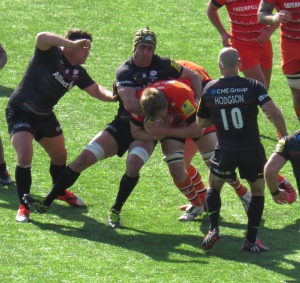 We had a series of scrums and penalties – so incredibly boring from the stands – before Billy Vunipola powered over the line.  Charlie Hodgson added the extras to put Saracens ahead at half time. 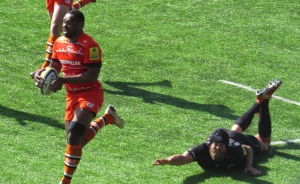 I’m straying into match report mode here so I’ll pull back – Tigers didn’t add to their score in teh 2nd half.  Saracens scored a further 2 tries through Parisien hero Marcelo Bosch and super flexible back Chris Wyles.  Hodgson converted one try and added a further penalty. 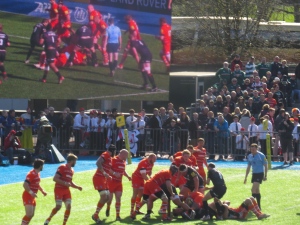 There was a controversial moment towards the end of the game that saw a yellow card brandished at Vereniki Goneva – I need to watch the game again to confirm my thoughts at the time that he was lucky not to see red! 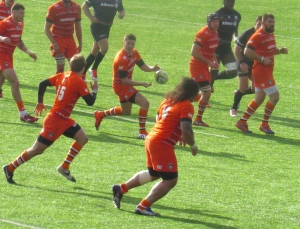 I sat with my friends Tracey, Sheila and John in the 2nd half and do have to give a mention to James and Mark, Tracey’s neighbours – they’re great company!  Always great to laugh as you’re watching a game of rugby!  There seem to be so many ‘angry’ people at games of late, it’s fun to laugh!

A few of us picnic – ers (not a word I know) met after the game and more totally fattening food was consumed.  It was a great afternoon full of friends and rugby.  No ‘facts and figures’ for this  event, but………

The Nicest ‘moment’ was spending time with good friends.  The Best moment of the game was Chris Wyles’ try – the man deserves to score in every game – he shines in whatever position he’s asked to play!

A whole different sport up next – unless I can get to a special press conference – and call it an event!  Watch this space………