Skip to content
Kings of The North – Event 41
#365SportingDays

A Friday meeting I needed to attend at work means I was able to accept an invitation to go to Leicester for an unusual and exciting event.

I had a leisurely morning – with a healthy breakfast (check my ‘lunch’ later!) before setting off for Leicester giving myself a good 3 hours to get there. 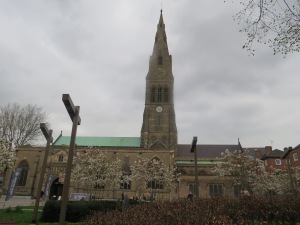 The journey was a good one, mostly 2 lanes so we had the  – I think I can go 70 even though I’m behind 30 cars doing 50 drivers – That I just don’t get, do they just expect the other cars to melt away if they drive on the bumper of the last car??? 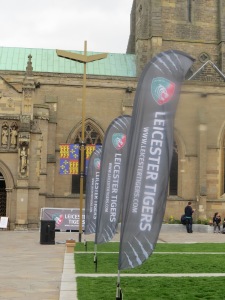 I’ve been to Leicester a few times, yet I realise after today I haven’t really.  I’ve been to Welford Road to watch rugby union and rugby league (London Broncos played Bradford Bulls there years ago) and I’ve been to watch Leicester City play too – specifically Real Madrid!  That was a bit good! 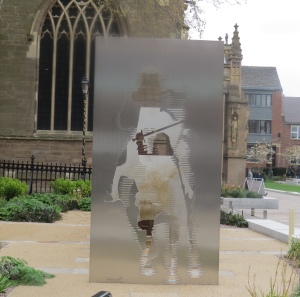 I’ve only ever been to the 2 grounds never into the middle of Leicester – I had no idea what to expect really.  The Event was being held at the Cathedral – I’m not sure I knew there was one – that is until Richard III was laid to rest there in March. 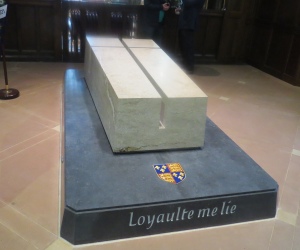 But, yes Leicester has a Cathedral, one that has become very famous in 2015. It was a perfect place for the Tigers to launch an innovative and exciting new competition for the Rugby World Cup year – and I imagine for years to come too. 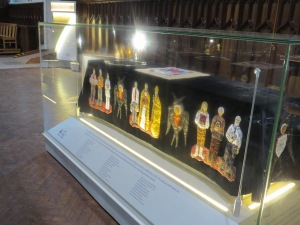 Before I get to the point of the visit – I arrived with an hour to spare – that generally means cake and hot chocolate for me – otherwise known as lunch this time.  I went to the very lovely cafe alongside the Cathedral and had a huge slice of Victoria sponge and decaff tea.  Not the healthiest of lunches, but wow it was lovely and a mere £4.00 all in! 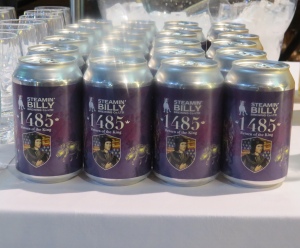 To the actual event, enough of the preamble.

The invite was to launch a new rugby competition – I hadn’t heard anything about it so was very interested. 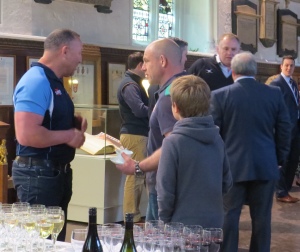 Richard Cockerill, Director of Rugby at Leicester Tigers, Steve Diamond of Sale Sharks and Dean Richards of Newcastle Falcons all arrived and in time took their place on a top table.  Before that point it was quite funny to see Richard and Steve drinking tea as they chatted! 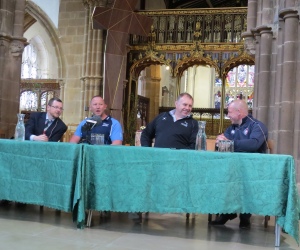 I had a chat with Steve Diamond before proceedings started and was very interested to know he’d played rugby league up until the age of 17 – this is a man I need to interview! 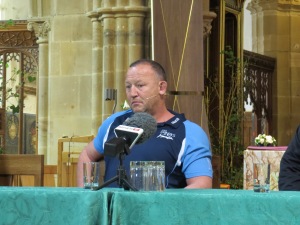 Down to the business of the afternoon – we were all there to see the launch of – the Kings of The North.  A 3 way competition that will be played between Tigers, Sharks and Falcons between September 6th and October 10th.  The overall winners of the round robin will be crowned Kings of The North. 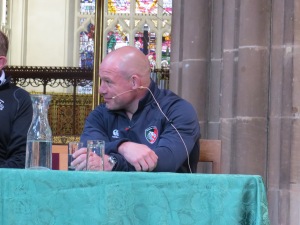 The Cathedral was the perfect setting to launch the new competition – Richard III himself had a great affinity with the North being the last King of The House of York. I can highly recommend a visit to his final resting place.

More of the detail of the competition at In The Loose – but I can say I think I’ve just filled my only weekend without sport – being the 2nd weekend in September – with Sale Sharks v Leicester Tigers. 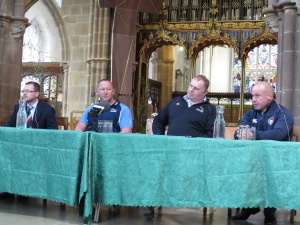 As well as launching Kings of The North the hugely charming Marcos Ayerza was at the event.  Again I had a chat with him before we all sat down.  This is a man who is clearly passionate about the Tigers and feels privileged to have been a part of the club since 2006.  We spoke a little about the dark arts of the scrum and the inconsistency of referees interpretations at scrum time. 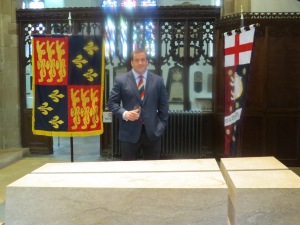 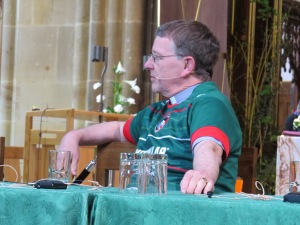 They now have around 2000 visitors a day, the place is well and truly on the map!  A lot of my photos are of the Cathedral – it made a change to take non-sport photos – very unusual for me!

Marcos then took centre stage  – He was there to talk about Argentina as well as his beloved Tigers.  Saturday September 5th sees Argentina come to Welford Road to play in the Marcos Ayerza Testimonial. 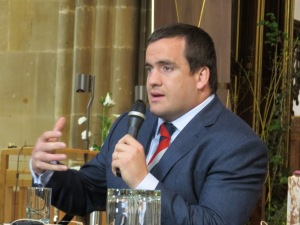 Marcos was clearly humbled to be bringing his country to play his club, and a little torn on which team he’d be playing for!  The tickets for the game are £25 – I bought mine weeks ago!  It’s a chance to see 2 top teams playing in an historic stadium!

Argentina then return to Leicester to play 2 of their World Cup games, this time at the King Power Stadium.  Sunday October 4th sees them play Tonga followed by Namibia on Sunday October 11th.  I can see that Leicester will become Argentinian for a few weeks in honour of this lovely man! 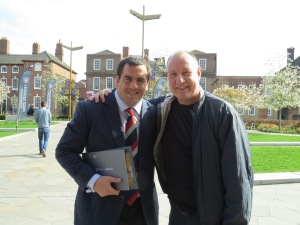 I had some icing added to what was a very nice afternoon when I met my Twitter friend and Tigers stalwart Steve Jarvis as I was leaving.  It was an absolute pleasure to meet him after chatting on Twitter for quite a while now!  We naturally chatted sport!  Cricket as well as rugby!

The afternoon was a very special one, I was very honoured to be there, it gave a real taste of the place Leicester Tigers has in the community. 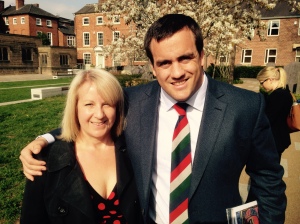 I will be writing a lot more about the details of the launch for In The Loose – so I’ll finish this unusual blog with my usual mention of my journey home. 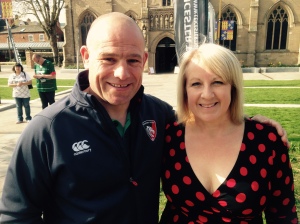 A quick one in spite of leaving at around 5:15pm!  And of course we still had the I must drive at 70 fools! Oh, and I had Hot Chocolate and another cake before I left – good job I had that healthy breakfast!