Friday evening and it was T20 Blast time again – this time it was all about local cricket – Essex Eagles v Somerset (No fancy Name) – I’m going to mix my T20’s up a bit this year so won’t be at all of the Essex games, but this one I just had to go to! 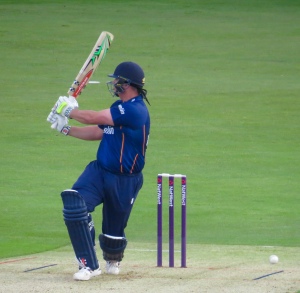 Essex v Chris Gayle – well and the rest of his team mates, but the chance to watch one of the best batsmen in the world in action just couldn’t be missed! 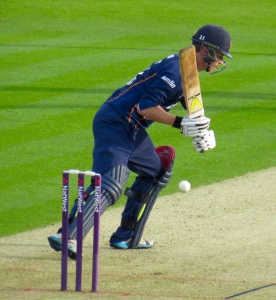 I’d had a lovely lunch with my good Saracens friend Tracey, bought not cooked, and gave myself plenty of time to get to the County Ground.

I was hoping to see Somerset bat first to ensure Gayle got 20 overs if possible to bat in, but they won the toss and decided to put Essex in to bat. 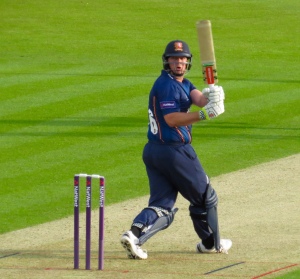 Jesse Ryder opened the batting with Tom Westley – it was good to see Tom back at the crease after being out with a broken thumb for a while.

Ryder reminded us that he has a big bat hitting 54 runs off 28 balls including 8 4’s and a 6.  He was out LBW from the bowling of Jim Allenby.

Wesley played a patient innings as he saw various team mates arrive only to depart with few runs amassed.

Ravi Bopara’s was the 2nd wicket to fall, bowled by Allenby for 4.  Kishen Velani faced 3 balls before he was walking back to the pavilion another wicket for Allenby he was out LBW.

Ryan Ten Doeschate lasted a little longer, facing 11 balls for his 14 runs – he was out caught Peter Trego off the bowling of Max Waller.

James Foster was the 3rd highest scorer for Essex with 16 runs to his name he faced 9 balls before Lewis Gregory caught him off the bowling of Sohail Tanvir.

The remaining batsmen mustered up 2 runs between them, Wesley in the meantime wracked up 68 before he was bowled by Alfonso Thomas.

176 didn’t feel enough to beat a team with Chris Gayle in the line up!  I must apologise for more than a few photos of 333 – but I can’t promise it won’t happen when Somerset come to the Oval in July!

And so the great man came to the wicket – joined by his opening partner Marcus Trescothick – none too shoddy a batsman himself.

Gayle started slowly and seemed to be a little perturbed by some of the bowling – that was of course to change, but in the meantime Trescothick scored 20 from 13 balls before an athletic catch by David Masters off the bowling of Graham Napier saw him depart.

Gayle stayed with his steady pace for a while seeing his partners depart – with Jim Allenby being 3rd top scorer with 19. 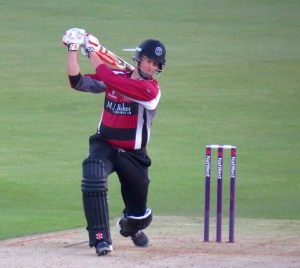 But. of course he got his eye in and started to do what we’d all come to see!  He hit 92 runs from 59 balls including 8 4’s and 6 Sixes – and wow they were big hits!  It was effortless and a joy to behold!

Gayle’s was the 5th wicket to fall when Ravi Bopara caught him from the bowling of Reece Topley, but by that time Somerset were on 164 runs.

The game did however go to the final over and in fact the last ball before Somerset were crowned winners.

Not an Essex win therefore but a thoroughly enjoyable evening all the same!

No facts and figures this time – I really must check out the food options!