Now, this in a way is a very odd event – yet, my goodness it’s also a completely wonderful one! Over the years I’ve worked in schools andI have had the […]

Now, this in a way is a very odd event – yet, my goodness it’s also a completely wonderful one! Over the years I’ve worked in schools andI have had the chance to meet some inspiring people, often at an `Awards event or a Presentation evening.  I saw Danny Crates, for example at an event in Southend – he is an amazing man!

So, there have been opportunities but none quite like this one.  I was in a fortuitous place when an email came from the other secondary school in the town – The Billericay School – it was an invite to the Headteacher to a lunch with Sir Gary Sobers!

I wouldn’t exactly say I begged, but I certainly wasn’t shy about the hope that I might be able to go along!  I make no secret of my passion for sport and of course we’re in the midst of the cricket season, and my colleagues know I’ve been at games galore.

I was very kindly given the chance to go and meet one of the finest cricketers we have seen – the man who was the first to hit six 6’s in one over and a whole lot more than that!

Sir Gary was at the school to talk about his cricket tournament in Barbados, but before he did that he gave a small talk then took questions.  I don’t have my usual array of photos – but a few of Sir Gary with Headteacher Sue Hammond and other guests too.

He picked cricket having had ability at several, as it was the only sport with a chance to travel,  the other sports were inter Island. 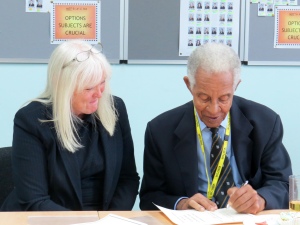 In his experience you have to watch to see the hint of ability, the way a child moves, picks the ball up, bats, that’s how you spot a child who’s going to succeed.

He had some useful advice for the students in the room – You have to work hard if you want to achieve He was keen to impress that – If you do the wrong things you’ll never get there.  He reinforced that fact that it takes sheer hard work, dedication and doing things the right way to be the one that makes it in life.

Sir Gary then opened the floor to questions, asking tongue in cheek that they didn’t get too personal!

Sir Gary went on to say that he admires the way the way England are playing cricket, that for many years it appeared that in English cricket it was pad not bat first to the ball.  Ted Dexter was one of the only English players who played with the bat.

Spin bowler Subhash Gupte got a mention too, he’d been the best bowler he’d seen in the West Indies, taking 28 wickets in 1954.

On the changing face of the game Sir Gary shared his thoughts that cricket is a batsman’ game, with the rules setting the field.  In his day there were no covered wickets, and bowlers could  bowl as many bouncers and beamers as they liked. 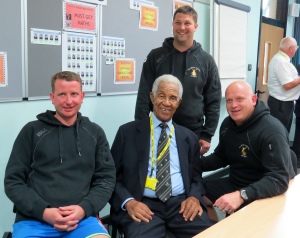 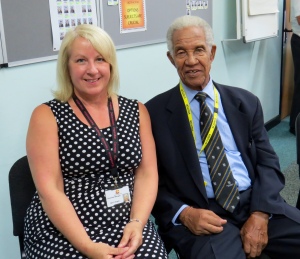 Sir Gary was very keen to state his opinion on one particular aspect of cricket today, again in his words –  If you snick the ball you walk! It’s cheating if you don’t, he walked on one occasion before any player shouted Howzat!

I feel that I could go on forever here and Im way past my usual word count – so rather than write about Sir Gary’s tournament here’s a link to go and take a look at his website – both Alistair Cook and Brian Lara played at the tournament in their youth.

It was a thrill to be able to talk to Sir Gary over lunch – we were truly in the presence of a legend!     I have to thank The Billericay School for giving me the chance to meet the great man! 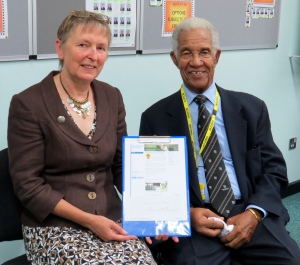