My Rugby World Cup schedule had been planned to make sure I saw the mighty All Blacks play at least 3 times, the first of those games saw them face […]

My Rugby World Cup schedule had been planned to make sure I saw the mighty All Blacks play at least 3 times, the first of those games saw them face Namibia at the Olympic Stadium in Stratford.  The closest of the stadiums to my home I took the option of travelling from Chelmsford.  At £12.50 return that was a good deal, I was able to park in the road as it was after 6pm too, so safe and free!

I had a great chat with a Mum and her 2 kids on the way, one of the joys of train travel, we were all headed to the Olympic Stadium and all excited to see the mighty All Blacks play.  I’ve been lucky enough to see the men in black a few times in recent years and I will never tire of their brand of rugby.

Their opponents for this match, Namibia have as their captain one Jacques Burger, a Saracens man, he plays with a passion that should see his team win every time.  It would be a very big ask, however,  to beat the World Champions! 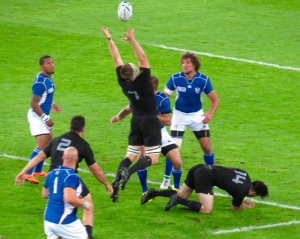 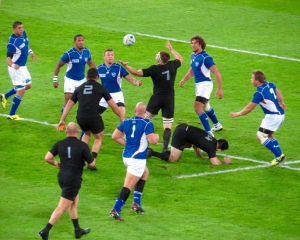 The All Blacks lined up for the Haka – and wonders, we could hear it as well as see it.  It’s become a  habit at Twickenham to sing over the top of one of the best traditions in the world of rugby, but boy, it’s so much better when you can hear it too! 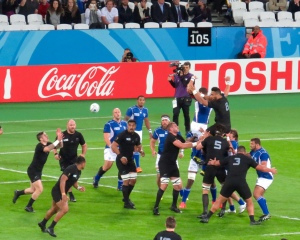 This isn’t going to be any kind of match report just a collection of random thoughts and recollections!  The All Blacks were, well the All Blacks – they play with a style that is rarely matched. 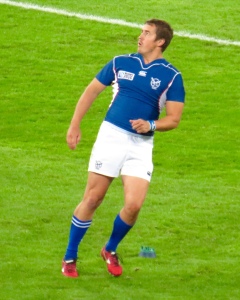 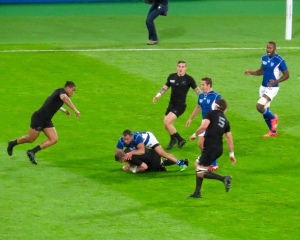 The Men in Black scored a mighty 9 tries sharing the spoils around.  A player I’ve never seen live, Nehe Milner-Skudder truly was the star of the show.  He has the dancing feet of an outstanding wing man, scoring 2 of his own 5 pointers and having plenty of involvement in the others.

Steve Hansen had said earlier in the year that the rolling maul is ‘boring’ (with an added word) and that it should be ok to pull it down.  Now that would literally be because his team simply don’t need to engage in that way of playing, yet they can be vulnerable to it. To a man, the tries we saw were scintillating and exciting. 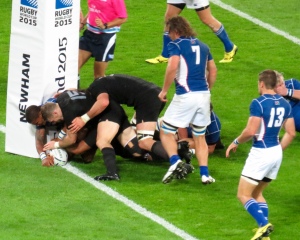 What was also exciting was that Namibia put up a great fight, they played with grit and determination and Johan Deysel scored a try he’ll never forget against the current World Champions!  It’s s plan that the underdogs have great support from every singe neutral in the stadium.  I suspect that a fair few All Blacks fans applauded the effort too!

A comment about Beauden Barrett – of all the kickers I’ve seen I don’t think I’ve ever seen such an effortless kicking style, casual was the word, very impressive to see!

Adding this in as I’m adding my photos – it was great to see/hear the rugby icon that is Richie McCaw get the great reception he deserved – another thing I don’t approve of is hearing the crowd booing one of the true greats of the game! 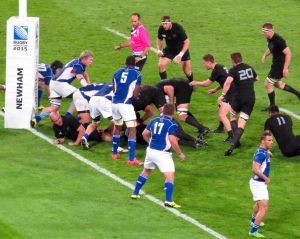 Another random comment – I formed the thought when I was lucky enough to be up close to 8 of the All Blacks a few weeks ago and this game reinforced my theory.  Bulk and hours and hours in the gym don’t seem to be high on the agenda, I’d say of you saw the majority of these men in the street you’d know they were sportsmen but not necessarily rugby players – skill is all! 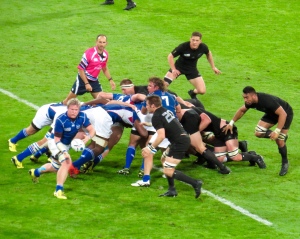 And so the game finished with a scoreline of All Blacks 58 Namibia 14 – the All Blacks didn’t have it easy, Namibia can be proud of their contribution.

The Olympic Stadium is a great venue for rugby, I had a Category C seat and had a fine view of the whole pitch.  For me the journey home was smooth once I got to the station, a delight to be home within an hour!