In the midst of all my Rugby Union World Cup gallivanting was the biggest game in the Superleague calendar – The Grand Final at Old Trafford.  I’d never been, it […]

In the midst of all my Rugby Union World Cup gallivanting was the biggest game in the Superleague calendar – The Grand Final at Old Trafford.  I’d never been, it was a no brainer to add it to my list of sporting events in this special year! 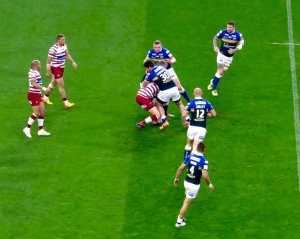 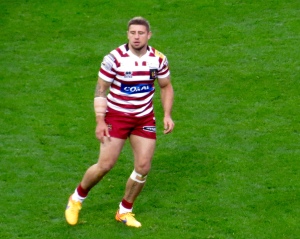 My only other visit to Old Trafford (Football stylie) had been for the final of the 2013 Rugby League World Cup – between Australia and New Zealand.  That was a very one sided affair, I had high hopes that this final would be more entertaining. 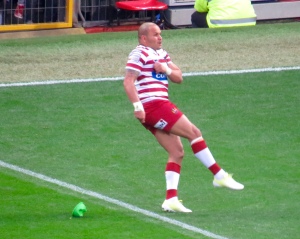 My hotel was in Warrington, a short drive to Manchester, I have to say the drive up was a nightmare!  I stopped off on my way to see a friend via the M1 – my Satnav said not to – but I ignored!  And suffered for it!  4 hours in the car and only as far as Chesterfield (ish).  The 2 hours on to Warrington was scenic, but dark, so 6 hours in the car and I was in the right place. 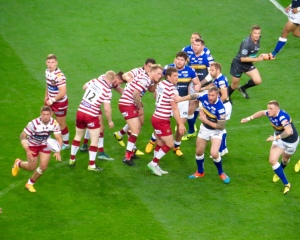 I’d treated myself to hospitality so needed to arrive early, I ended up paying for parking twice as I stupidly booked online in the morning and didn’t get what I needed in time to park, so I paid again – to charity, but annoying to have to pay £22 to park!  (I’ll be getting a refund I hope)

If you haven’t been and are planning on going, if you arrive early you don’t need to pre book, there’s plenty of parking close to the stadium. 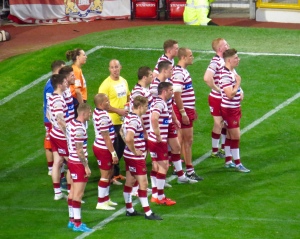 I arrived early so took a stroll around the stadium – that included walking through the Munich Tunnel; a very humbling experience to read accounts of the terrible accident that took the lives of so many bright young stars. 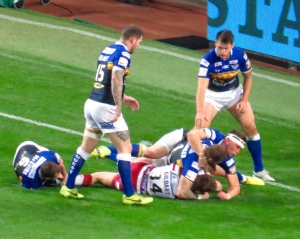 I headed to the Salford Suite along with many others, how we love a queue – I waited until it’d died down a bit before I joined it. I was sat with a group of rugby league fans from different areas who supported different clubs, we had a very pleasant lunch! 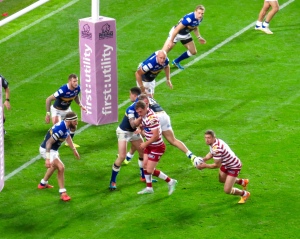 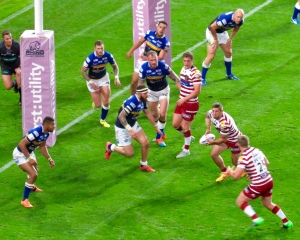 Game approached so I headed to my seat, and what a great seat it was!  The atmosphere in the stadium was wonderful!  DJ Spoony was in full flow with a great range of music – including controversially playing You’ll Never Walk Alone – The Liverpool FC anthem in the home of Manchester Utd! 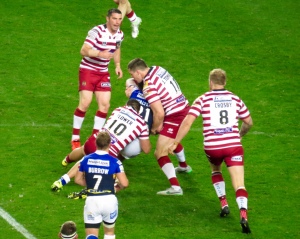 Next up were The Charlatans – wow Rugby League knows how to build up to a big game – it was brilliant!  The teams emerged to fireworks and yelling, the Challenge Cup Final is always pretty amazing, this was a step up from that! 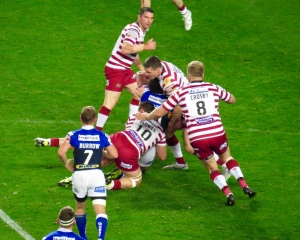 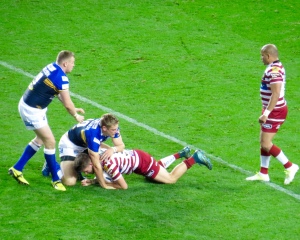 I had very mixed emotions on which team I wanted to win, if I’m being perfectly honest I have a soft spot for Wigan Warriors (sorry Leigh fans, must be the area – you too!) but I also have a great admiration for Kevin Sinfield and Jamie Peacock, 2 men playing their last games for Leeds Rhinos.  That meant in reality that I’d be shouting for both teams and not leaving disappointed. 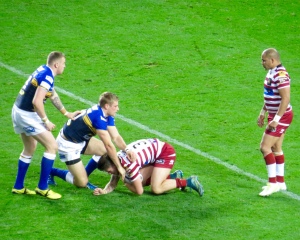 And both teams certainly gave their fans something to shout about!  Wigan Warriors were first to score; Liam Farrell made a great break, timing his pass to Joe Burgess perfectly – incidentally playing his last game of club rugby in England for a while – he ran in a great try.  My neighbours were very happy having had a bet on Burgess to score the 1st try at 9-1 – that will have covered a few drinks. 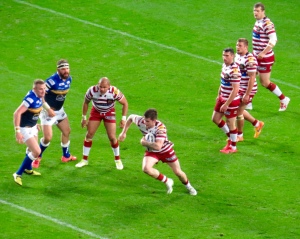 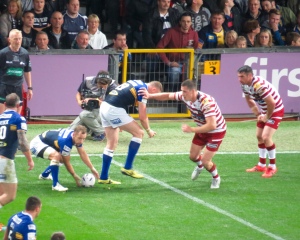 Having set up the try Matty Smith in effect set up Leeds first try as he fumbled the ball from the kick off, territory is all in rugby league and a grubber kick from Sinfield for Danny Mcguire saw Leeds Rhinos score their own try moments later.  That saw the score back to even at 6 all.

Leeds made the most of the pendulum swinging back their way with a further 2 tries in the first half – the first scored by Joel Moon after prolonged involvement from the Video Ref.  From the stands it looked like McGuire had knocked the ball on in the build up, watching on the small screen I’d say the award of the try was the right result. 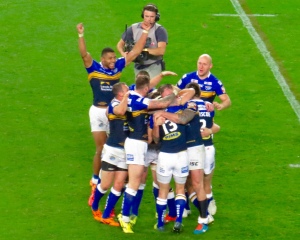 Leeds 3rd try was shout out loud exciting – well for Leeds fans and neutrals – Callum Watkins went flying up the wing, making a well executed pass to McGuire who scored his 2nd of the match.

Having been in the lead Wigan went in facing a 10 point deficit, with the score on Wigan 6 Leeds 16.  Could they claw their way back into it?  This is Wigan Warriors we’re talking about – and I suspect they’ll have had a flea in their ear in the dressing room (a polite way of saying what I really want to say).  We had the amazing sight of captain Sean O’Laughlin putting up a kick to the corner, straight in the direction of Ryan Hall, I could see the Leeds speed man storming up the field, but no, the ball was plucked from his grasp by Dominic Manfredi who scored to close the gap.

Matty Bowen, playing his last match for Wigan scored what was possibly the try of the game, he evaded 5 or 6 Leeds defenders before sliding in to score under the posts.  Bowen converted both tries to put Wigan ahead again to the delight of those in cherry and white.

In what may have been an error of judgement when Wigan were ahead they chose to kick a penalty rather than extend the gap further, this took the score to Wigan Warriors 20 Leeds Rhinos 16. 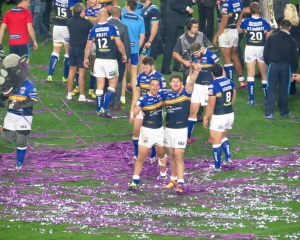 Manfredi and Hall again found themselves competing for a ball kicked towards the goal line, this time it was the Wigan line and this time Hall won the battle, knocking the ball back it made its way to 20 year old Josh Walters – what a dream moment for a young lad playing in a Grand Final.  Kevin Sinfield in fairy tale style added the 2 points that saw Leeds move into the wining position.

The score finished on Wigan Warriors 20 Leeds Rhinos 22 – meaning that Leeds achieved a domestic treble, winning the Challenge Cup, The League Leaders Shield and the Grand Final.  Not a bad way to bow out of a rugby league career for Kevin Sinfield and Jamie Peacock (I believe Kylie Leuleui is joining them too)

Next year could well be a struggle for the Yorkshire team with the loss of 3 pivotal players.  Wigan see the return of one of their favourite sons Sam Tomkins and have many bright young stars – perhaps 2016 will be their year.

Oh, a footnote – there was a streaker!  It was pretty funny to watch the players totally ignore him pretty much – the stewards ‘escorted’ him from the ground.

I also had the pleasure of meeting Gary Schofield and hope to interview him at some stage! 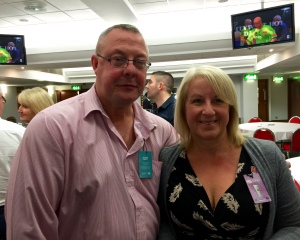