My second trip to the Olympic Stadium was another straight forward one – the place really is easy to get to from my part of the world – and the stadium from what I’ve seen so far is pretty impressive. 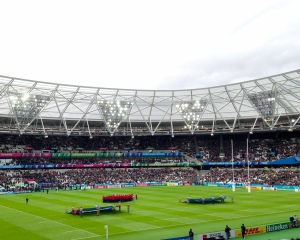 I arrived in plenty of time and managed to swerve the people directing everyone the long way round, so had a pleasant leisurely stroll to the ground.  I had the chance to chat to a few South African fans around me before the game and spotted a very colourful group.

They were wearing what I thought were called Pansela Pants – I was hoping to find some history on them but I must have the wrong word – Boo! – However – I just asked a South African friend so you’re going to get some history! They were Pantsula Pants!

They were over for 2 weeks as a group – and in chatting it was great to hear they were friends of Schalk Brits and Ernst Joubert of Saracens  what a small world!

Pantsula dance emerged in the 1950s and 1960s as a response to the forced removals implemented by the Apartheid government, shortly after its ascent to power. It began in Alexandra and Sophiatown, two townships around Johannesburg, as groups of older men engaged in informal street dance competitions. Gradually the dance form spread throughout South Africa.[By the 1980s, pantsula was practiced by black South Africans of all ages and no longer limited to men. It began to develop more political overtones. Pantsula was used as an expression of resistance during the political struggle then occurring against the Apartheid government, as well as being used to spread awareness about social issues such as AIDS. After the end of Apartheid in 1994, pantsula persisted as an expression of cultural roots for many black South Africans. It also gained popularity in the white community of South Africa and has begun to take on new meanings as a dance form for all.  Thanks to Wikipedia for the explanation. 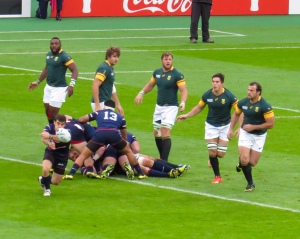 My neighbours for the match were a lovely young couple Jason and Victoria with their baby Joshua.  Joshua is 10 months old and they had to buy a seat for him at £65!  How crazy is that!  This is a couple as sports mad as me – Victoria from Derbyshire is a Manchester Utd fan and Jason from South Africa just plain sports mad. 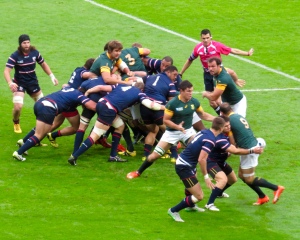 They were lovely company – poor Joshua was a little tired and more than a little scared by the noise of the crowd – it was upsetting to see him upset – but sleep remedied that and he woke up all smiles. 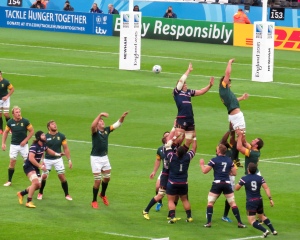 A lot of non rugby ramblings so on to the match – South Africa were clear favourites for the win, having been beaten by Japan in their first match they’d gone out all guns blazing in subsequent matches and this one was no exception. 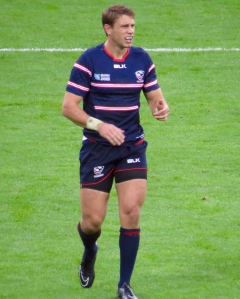 What I’m going to say next is going to sound odd – South Africa scored 10 tries and amassed 64 points to the USA’s zero – and yet it really didn’t feel that the 2 teams were that far apart. 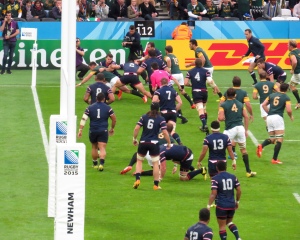 I’d say one of the biggest differences apart from the 64 points of course!  Were the number of penalties given away – they just kept on coming for South Africa.  The USA concede 17 penalties – they of course give points, in one case a penalty try, but they also give field position and this South African team were in the mood for scoring tries – 10 in all! 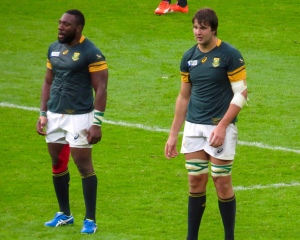 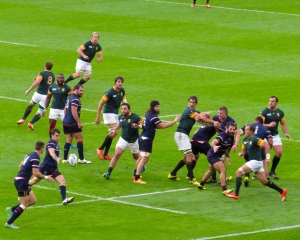 The USA also missed 30 tackles – with stats like that and a Tier One team in front of them it was never going to be a pretty tale! 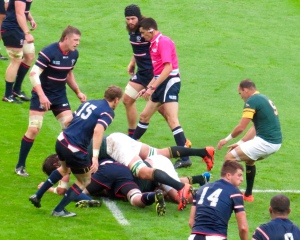 There was a moment of drama on the 20 minute mark when the USA Blaine Scully and Brian Habana leapt up for a high ball.  Both fell very nastily, but both were looking at the ball.  Common sense prevailed and having been looked at by the TMO there was no need for action.  It did look bad from the stands – but I so don’t approve of the ‘Off, Off, Off’ shouts that came from behind me – this is rugby, not football! 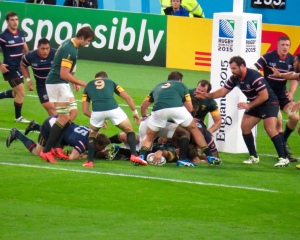 In spite of the final scoreline there were positives for the USA – they were only adrift by 14 points at half time having defended well.

Brian Habana scored 3 tries – that put him on 15 tries in the World Cup – matching Jonah Lomu’s record.  I have a feeling he’ll beat that record before this tournament is done. 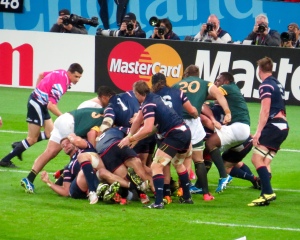 In spite of what is clearly a one sided scoreline it wasn’t a one sided game if that makes sense, I thoroughly enjoyed it!  The company most certainly helped too! 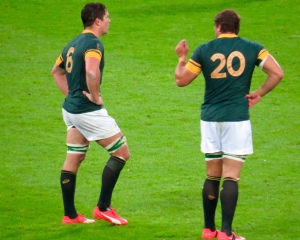 I also had the added bonus of meeting up with my very good friends Alun and Sharon after the match for a Costa – and the requisite cake on my part – Alun and Sharon were both good.

One more pool game to come for me – before we get to the business end of the tournament.