When I was seeking Rugby World Cup tickets I always had in mind that I”d follow the All Blacks through the knock out stages, so bought myself a ticket for […]

When I was seeking Rugby World Cup tickets I always had in mind that I”d follow the All Blacks through the knock out stages, so bought myself a ticket for each of the quarter finals in Cardiff at the soon to be renamed Principality Stadium.  It was a no brainer for me to travel to my favourite place to watch rugby amongst the 6 Nations teams,  (I have Rome to come in February but I can’t believe it’s going to overtake!)

My journey was a tad convoluted – I drove to Bristol via Leighton Buzzard where I had a cup of tea with Ali in The Bald Buzzard Alehouse – what a lovely 20 minutes!  We chatted and passed the time as if we’d known each other for years – good builders tea too! 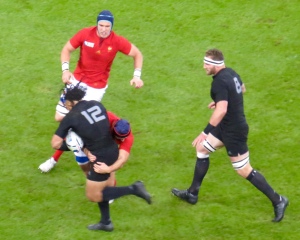 Then I had a very tasty dinner in Martini’s a family run Italian restaurant with my good friends Alun and Sharon before popping into another friend Clare’s hen party!  I didn’t linger long as I had a long drive ahead.  The time of night meant that drive was smooth and I arrived at around midnight.

I stayed in a Premier Inn which was as always great value, and wow what a comfy bed!  Breakfast was in Sanisbury’s – I’m so sophisticated!  I headed into Cardiff early so I could take in the Wales v South Africa match.  I messed up a bit there in trying to get into a full Fanzone – but eventually ended up with a good view in the Park hotel in the company of some very charming Irishmen.

The result didn’t go the way of the Welsh which was a big disappointment – they’re my second team in many ways when it comes to international rugby.  I was disappointed to hear a group of Welsh lads blaming the English referee for the loss, in my opinion there’s been far too much of that during this World Cup.

I made my way into the stadium, my seat was very near the top of the stand on Level 6, again a Category B ticket, I still can’t understand how they work these things out.  However I can honestly say I don’t believe there’s a bad seat in the Millennium Stadium.

I had delightful company during the match – Keith from Ireland sat next to me – he was beside himself to be in the stadium and about to watch the All Blacks, he’d never seen them before.  It made me realise how privileged I’ve been to see them a fair few times.  His excitement was a joy to behold! 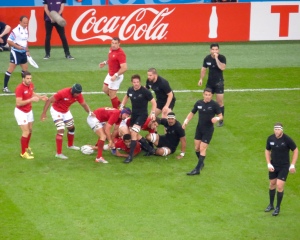 As is my way I tried to belt out both national anthems, the atmosphere was great!  I’m pleased to say the Haka was properly observed, wonderful as always!

I had a delightful Kiwi couple behind me – Grant and Katherine – they gave me a funny looked when I was shouting out – Allez Les Blues!  I did explain that it had to be done but that I was very open on who I wanted to win.

I imagine the All Blacks and their fans were being faced with the team they least wanted at this stage – France having been something of a bogie team.  However the French team that put the All Blacks out of the World Cup twice did so on the back of being Six Nations Champions – that wasn’t the case this time.

It has to be said you never quite know which France is going to rock up – it’d be fair to say the ‘not terribly good one’ turned up in Cardiff.  On the other hand the spectacular All Blacks turned up.

Things were quite tense for the first 22 minutes – with the score on All Blacks 10 France 6 with just one try scored by Brodie Retallick on the board.  That try was scored through one of those dreaded charge down situations, something every decent kicker dreads – Freddie Michalak was the man who didn’t kick quite high enough.  Insult was added to injury quite literally when Michalak was unable to carry on having funny enough, injured himself.

Nehe Milner-Skudder who had been a star in this World Cup scored the next try, evading Scott Spedding before speeding to the line.  Julian Savea wasn’t to be outdone by his opposite wing man and scored the next try after  sublime offload out of the back of his hand by Dan Carter.  The gap was stretching and the score stood at New Zealand 24 France 6 with 31 minutes played.

The tremendous Louis Picamoles closed that gap using his strength to power over for a try, Morgan Parra converted to see the All Blacks lead reduced to 11 points. 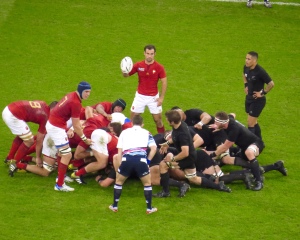 However Savea scored a quite remarkable try just before half time – he really doesn’t appear to be that huge, but he literally barged 3 tacklers out of his way to score his second of the half!  It was a sight to behold!  Half time saw the score on All Blacks 29 France 13.  A fair hill for the French to climb against an All Blacks team on fire!

Things went from bad to worse for the French when Picamoles turned from Saint to Sinner, pressing his closed fist into Richie McCaw’s face during a fracas, no punch, but not a terribly good idea!  I sometimes wonder of these men understand how many cameras there are watching their every move!  A yellow card brandished by Nigel Owens and a big advantage to the All Blacks for 10 minutes!

Jerome Kaino was next up with a try, he was the man on Savea’s wing and stretched that lead.  I’ve rambled so should probably speed through the action.  Savea scored his hat trick try 8 minutes later against a tiring French team, by this point it felt like watching exhibition rugby!

That exhibition was continued with Kieran Read strolling through with a huge smile on his face to score under the posts.  Tawera Kerr-Barlow the replacement scrum half scored a further 2 tries before the All Blacks were done!

The final score was New Zealand 62 France 13 – I do believe the voodoo France held over the All Blacks was well and truly put behind them!  The All Blacks carried the ball for an amazing 732 metres!  That made for some shout out loud exciting rugby!  It was exhilarating! 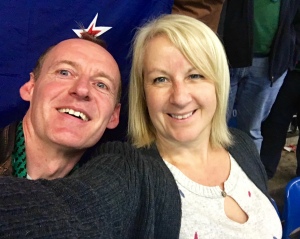 Grant and Katherine were 2 very happy Kiwis and Keith was over the moon to have witnessed such a wonderful display, memories that will last a lifetime!

One criticism of Cardiff – wow it’s a nuisance to leave!  It took me way over an hour to get back to Bristol – cars galore!