One of my first 365 Sporting Days blogs involved the same fixture in Gloucester; I recounted what was a fairly unpleasant experience all round.  However I’d had a good time […]

One of my first 365 Sporting Days blogs involved the same fixture in Gloucester; I recounted what was a fairly unpleasant experience all round.  However I’d had a good time the previous year so decided I had to return in the hope of a better evening.

Armed with my Satnav I set off to Gloucester – it seemed to keep changing its mind as I went along – but decided in the nick of time that the M4 was the best route.  I came off at Swindon and was sent on a quite beautiful route that took me through Stroud and Chippenham – we really do live in a stunning country! 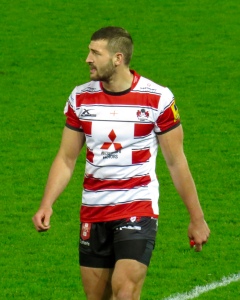 I’d had a bit of a nightmare with my hotel – I’d booked a Travelodge the Monday before the game, when the confirmation came through I’d somehow booked for the Monday!  I’m very pleased to say that Travelodge managed to sort it out for me via Twitter – very impressive.  The hotel was sparkly new and had the extra comfy bed as always.

I walked into town, dressed in my new Saracens shirt – a whole new look for me, I wondered if that fact would prompt a bad reaction at the ground.

A big group of friends were in Gloucester on a Stag ‘do’ – I spotted them in Aroma and went in to say hello – then ended up tagged on the end having dinner with them!  The curry was superb, the company great fun!  We  walked to the ground together before I set off for my seat.

So, what sort of reception did I get as a blatant Saracens fan this time?  I can honestly say it was completely friendly, yes with some banter, but it was good natured, fun stuff.

I’m not going to linger over the game, I would say it was one for the purist, verging on slightly boring.  We were treated to a single try scored by Mike Ellery on the wing for Saracens.  Owen Farrell had made the break from his spot as inside centre, it was one of the few exciting moments of the game. 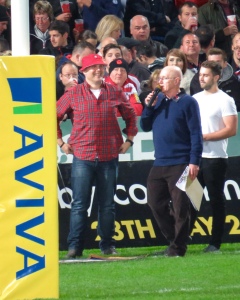 A break by Gloucester in the second half should have led to a try for Jonny May on the same wing, for some very odd reason however Billy Twelvetrees kept the ball to himself and was closed down rather than pass to May who would have sailed in to score.  That would have won the game for Gloucester I’d say.

However Twelvetrees 5 penalties were surpassed by the try and 4 Saracens penalties – one for Charlie Hodgson and 3 for Owen Farrell – the last of which was in the dying moments when Gloucester conceded a penalty straight from the kick off after a superb long range effort from Twelvetrees.

That late penalty was the decider as it was in the opposite direction in January, with James Hook breaking Saracens’ hearts.

I’d swapped my seat at half time when my lovely Twitter friend Lexi came to find me, we’d never met but chatted online for a fair few years, meeting her really added to what was a very pleasant experience!

I had breakfast in the Quays the next morning with my friend Chris, what a delightful area of Gloucester, we had a tasty breakfast and great sport chat.  I left Gloucester with a completely different frame of mind to my visit in January.  Excuse the random egg photo but it had to be included – they were dotted around the place.