I’ll warn before I start that I have no idea where this one will go!  This was my first NFL match, and I’ll be up front, I was fully expecting […]

I’ll warn before I start that I have no idea where this one will go!  This was my first NFL match, and I’ll be up front, I was fully expecting to be bored to tears! 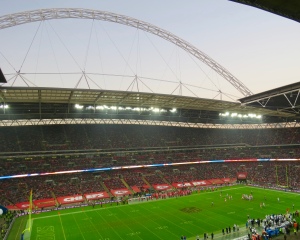 My only previous encounter with American sports was an NBA match at The O2 – a 48 minute game – it went on for 3.5 hours! The teams were tied at the end of the 48 minutes, so 5 minutes of extra time after which they were still tied – we had a further two 5 minutes – I was praying that  we’d actually get a result!  I only just made the last train home – wow it was dull! 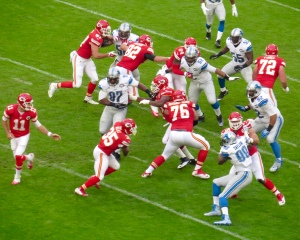 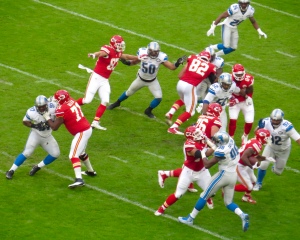 A number of the people I work with are crazy about NFL –  I thought I ought to go and see for myself what it’s all about.  I chose the interminable Jubilee Line route – it seemed to take an age, yet got me there in plenty of time.  It was interesting to see so many NFL tops on show both on the journey and of course on Wembley Way.

The brand that is the NFL is huge worldwide phenomenon, with caps and shirts galore being sold, one article I’ve found states that it’s an 8 Billion Dollar sports entertainment industry.  The top players earn ludicrous amounts of money! Here’s a list of the top 5 earners – and these are annual figures and yes the zeros are the right number!

You can see why NFL needs to turnover a lot of money!

The weather was crazy!  I’d taken layers, and nearly expired from the heat while I was waiting to get into the ground, it was positively hot! And this was November 1st! I would add that I needed both layers once the match started! 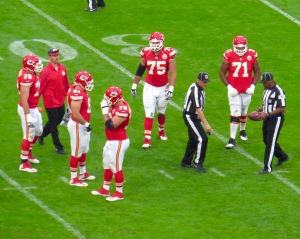 Wembley Stadium was set up as a the Kansas City’s Chiefs home ground, they’d brought their announcers with them and of course their Cheerleaders – I have to say the Cheerleaders were really impressive.  So many of their English counterparts can’t quite seem to do their thing in time – these ladies were immaculate all the way through.

There’d been a huge and amazing marching band the week before but our pre game entertainment was rather bizarrely – Madness!  They performed 3 or 4 songs, very well I have to say – but it was a bit odd as an opener for an American game. 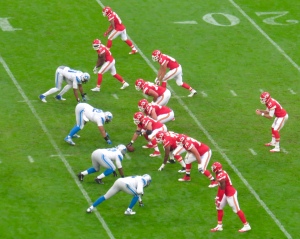 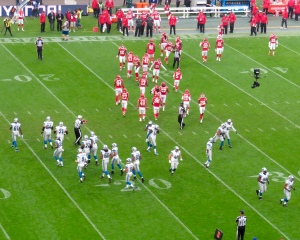 I’m not going to say too much again because I’d be truly kidding you on trying to make you believe I knew what was going on!  In fact here’s an explanation of the game my younger brother sent me while he was waiting to catch a delayed flight that afternoon.

Only one clever one though – the Quarterback

And sometimes a skinny little fella can come on and kick a goal to win the game which makes the fat one/fast ones irrelevant!

That feels like quite a good description to me – I’d liken what I saw as a game of chess, but taking part on a sporting field with human beings.

While no one formula for stacking an NFL roster is iron-clad, one rule in the NFL is: Teams are only allowed to have 53 players on their active roster. Of these 53, only 46 players can dress out for the actual game.

I take that to mean that 96 men in kit arrived for the match!  That’s a huge number of people – almost like a military operation!  Talking of the military we were introduced to an amazing group of people who’d completed a walk to raise money for wounded military personnel.  There’s a great article about Walking for The Wounded here –

I seem to have written loads without really writing about the actual sport!  Before i expand a little – there were loads of match officials too! I counted 7 – with 11 men on each team that was a lot of eyes on the play – they threw a flag on the pitch when they saw something ‘suspicious’.

The Chiefs kicked off and once the Lions has run back a bit with the ball – the whole team ran off! I was, not knowing really about the whole chess thing, slightly gob smacked!  What I did come to understand was that within the 46 men are if you like teams within a team depending on the state of play. 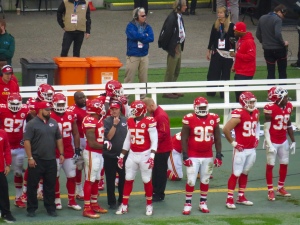 The Chiefs were now defending so they needed the big men on for that purpose, although all of the swapping and changing elongated the game I found the whole thing quite fascinating!

The whole aim of the game is to make 10 yards in 4 attempts each time as you head towards the End Zone to Touchdown. )I got those terms out all on my own!  I did learn!)

During this match – the Lions didn’t do too well on the basics, whereas a lot came off for the Chiefs.  I’m going to confess in black and white that I thoroughly enjoyed the whole thing! The score finished on Kansas City Chiefs 45 Detroit Lions 10 – something of a one sided match! 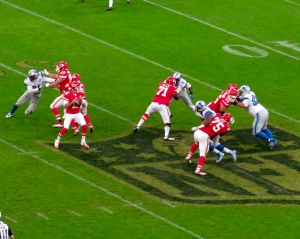 Getting away from Wembley was quite smooth – there were fewer trains on the Metropolitan Line – but it’s a much quicker way to get through London to Wembley.  I’ll be looking out for the fixtures next year and getting myself booked in!

I mention the cost of drinks because they’re quite frankly outrageous!  I’d bought my lunch in Pret a Manger before the game – I’d make sure you never find yourself in need of buying food at Wembley Stadium!