Looking through the record books I believe I first saw the mighty All Blacks play at Twickenham on 24 November 1979, I went with my then boyfriend without tickets we managed […]

Looking through the record books I believe I first saw the mighty All Blacks play at Twickenham on 24 November 1979, I went with my then boyfriend without tickets we managed to buy two in the Cabbage Patch as I can recall.  We managed to buy 2 of the 100 that had been stolen! 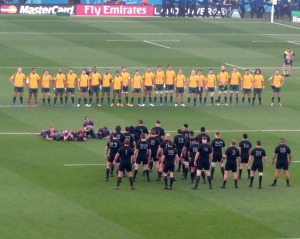 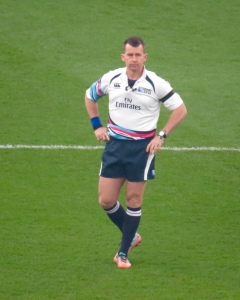 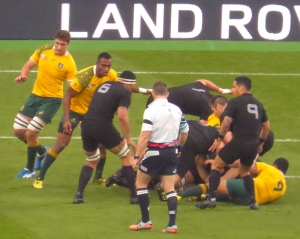 But. we were given access into the stadium before that was realised and the stewards took pity and gave us 2 great seats in the middle of the stands.  Now I’m an England fan through and through but that day something of a love affair was started by these men in black. 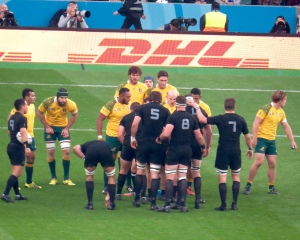 A change of boyfriend meant a rest from rugby for a while, and when live rugby did come back into my life it was the 13 man code, until Wasps were just too good not to watch around 11 or 12 years ago.  I always watched the international games on the TV but never imagined rugby union would become such a big part of my life.

I’ve been very, very lucky to see the All Blacks most Autumns in recent years, including the England win in December 2012 – I will never forget jumping up and down in the stands at Twickenham.  Last Autumn I go to see them play against both England and Wales.  My soft spot for this team has longevity.

For this Rugby World Cup I decided to try to get to as any All Blacks matches as I could, I failed with the Georgia match through being unwell, but I saw them beat Namibia heavily then followed their play off games.  I saw a veritable thrashing in Cardiff as they despatched France and a much tighter semi-final against South Africa.

I’d decided I had to see the Final if I got a sniff of a ticket, I persisted with the official website and bagged myself a Category B ticket for a mere 520 English Pounds. 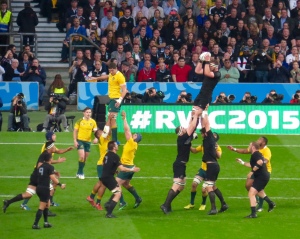 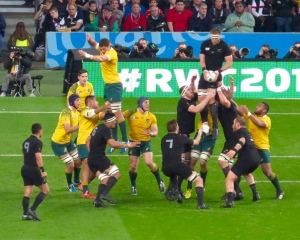 So, the team I’d focussed on would be there, yet, I actually went into the final as a neutral.  I’d felt from Australia’s first match that they would be the only team who could beat the All Blacks and I thoroughly enjoyed their semi-final against the Argentinians .  They played an exciting brand of rugby and their back row was a joy to behold! 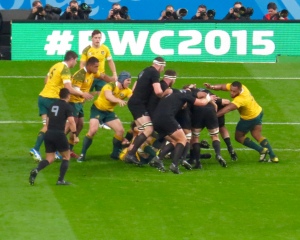 I gave myself plenty of time to get to the ground and as always found someone to chat to on the train – Glen and his son, we chatted all the way from Waterloo to Twickenham – I’m not sure which one of us was more excited!

I’d learnt to accept the fact that my Cat B tickets got me a seat behind the posts – I could at least see the whole ground and was able to get some great photos (I hope you agree). 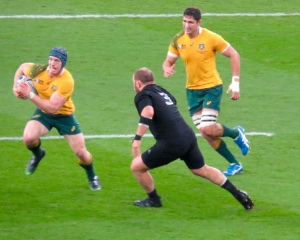 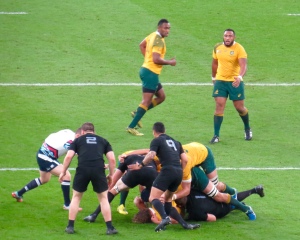 I had a group of South Africans on a tour to one side of me and a lovely young couple from New Zealand, Caitlin Sullivan and Campbell Sullivan on the other.  Caitlin in particular was great company!

I did my best to sing both anthems as is my way – then settled down to watch the Haka – it makes the hairs stand up on the back of my neck every single time – it really is one of the best things in sport!

I’d felt that we’d see a close, hard fought match with the battle between the 6 men in the respective 6, 7 and 8 shirts being the pivotal factor. 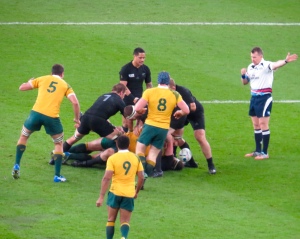 In trying to find the statistics for the game I’m coming up with some differing numbers – but I’d say there are 2 key stats – Tackles Missed – All Blacks – 15, Australia 27.  Metres Made – All Blacks 501, Australia 415 .  The territory was to the advantage of New Zealand – they had 54% and also 53% of the possession. 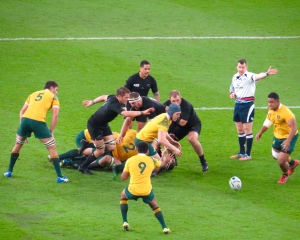 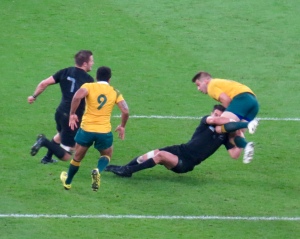 Those figures I’d say tell the story of a level of domination by the All Blacks – and I would go as far as to say that the first half was like watching men against boys.  However on 36 minutes the teams were only separated by 6 points with Dan Carter have scored 3 penalties to Bernard Foley’s 1.  One of the All Blacks penalties had come after a high tackle on Carter by Sekope Kepu.  He made 2 such tackles on Carter and was lucky not to see yellow. 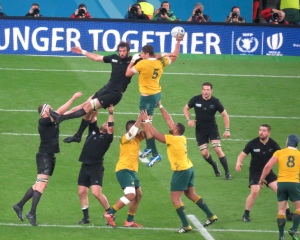 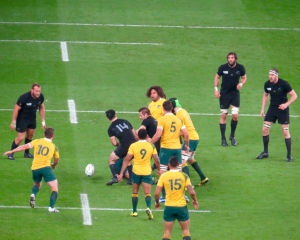 Australia did suffer two key injuries in the 1st half, losing firstly Kane Douglas then Matt Giteau – Giteau was replaced by Beale but it would have been a big blow. 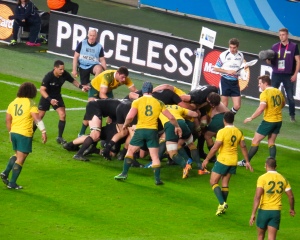 A try in the dying moments of the first half by Nehe Milner-Skudder duly converted by Carter saw the teams go in at half time with the score on New Zealand 16 Australia 3.

One of the unsung heroes of the All Blacks back line, Conrad Smith, was substituted for impact player Sonny Bill Williams early in the 2nd half – and wow did he make an impact!  It always makes me nervous when a player runs with the ball in one hand, it’s something rugby league players do quite often, but when we’re talking SBW it usually results in a fantastic offload.

He passed one handed stylie to Milner-Shudder – finding the ball back in his (one) hand once to was recycled he almost seemed to drop the ball in Ma’a Nonu’s hands who took advantage of a gap to run in and score a superb try!  Being behind the posts was something of a result! Carter, in great form converted the try to stretch that lead further, 21 to 3 was a very big hill to climb!

Nigel Owens was alerted to a tip tackle by Wayne Barnes – the perpetrator being Ben Smith – as the All Blacks were defending their line.  Owens had a good look at the replay and liaised with the TMO and rightly so in my opinion brandished a yellow card, giving Australia a chink of light.  This was to be an evening of records – Smith was the first man to be sent to the naughty step in a World Cup Final.

Australia capitalised straight away with the immensely strong David Pocock muscling his way over the line, Foley made no mistake with the conversion. 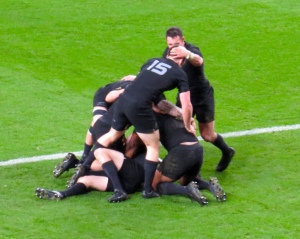 A moment of magic by Curtley Beale saw the Australians close the gap to a mere 4 points after his chip over the All Blacks’ defence was gathered by Drew Mitchell, he was halted but Tevita Kuridrani was waiting to take the ball, he scored to give his team hope. 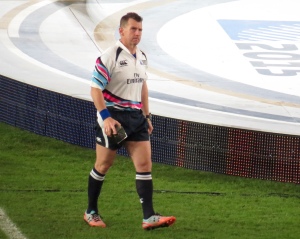 Amazingly Dan Carter isn’t renowned for his propensity to drop goals, but after a decisive kick in the semi-final he deflated the hopes of the Australians with an audacious drop goal in the 70th minute.  It only stretched the lead to one converted try, but it made the men in yellow hang their heads momentarily.  A penalty 4 minutes later made it a 2 score difference.

The final scoreline was to be one that reflected the true nature of the game when Beauden Barrett hacked on a Ben Smith kick, gathering it as he went over the line to score a try – again at the right end, of course!  What a view we had of that moment of ecstasy for the wonderful All Blacks team!  Carter of course converted the try and the final score was New Zealand 34 Australia 17.

The game was worthy of a Rugby World Cup Final – the All black became the first team to win the cup 3 times and more importantly the first to retain the cup.  They were deserved winners – it was a privilege to be there to see Richie McCaw lift the William Webb Ellis Trophy.  I suspect that most neutrals and of course every All Blacks fan were thrilled with the result.

A few stats to finish off this wonderful tournament –

I managed to buy 17 tickets – but had to miss 2 games through being unwell – but the 15 I made?  Just wow!  Lifelong, Wonderful Memories made! 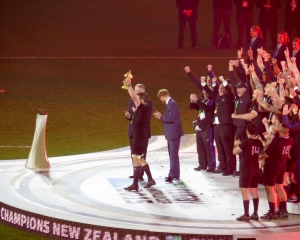 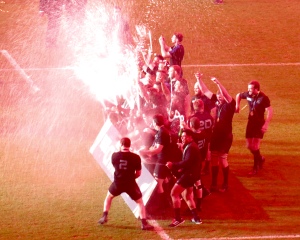 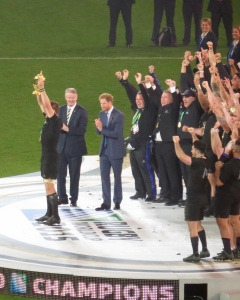