Skip to content
The RBS6 Nations So Far – What Have We Learnt?
6 Nations Rugby

The RBS6 Nations So Far – What Have We Learnt?

Welcome back guest blogger Jez Denton with his views on the tournament so far.  (Apologies for only including photos from England games – they’re the only ones I’ve been to so far)

The first two weeks of the six nations are now past, and it’s time to reflect on some of the talking points of the tournament so far.

Firstly, Northern hemisphere rugby still has a long way to go to catch up with the big boys down south. In the games we have seen so far, there have been too many mistakes, too little invention and too much ‘heads down’ Rugby being played. And, it seems that too many people are unconcerned by this lack of improvement from the World Cup, preoccupied as many seem with the short term aim of winning the six nations this year without seemingly having any interest in creating something new that could possibly challenge the might of New Zealand, Australia and South Africa. 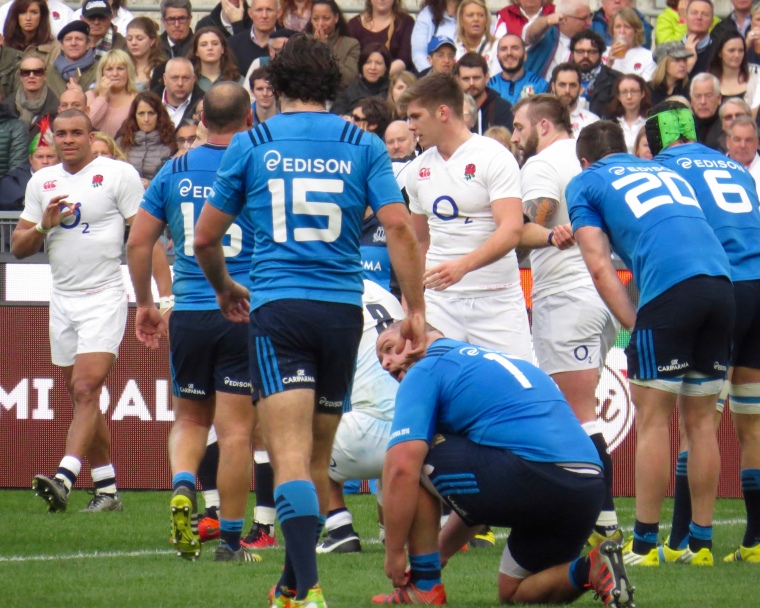 To be fair, there are two nations in this year’s six nations I single out for this criticism, those being the two most successful ones of recent years, Wales and Ireland. Ireland I do cut some slack for, taking into consideration their large and ever lengthening injury list. Wales, however, for me are indicative of the old Einstein quote about the definition of insanity being repeating the same thing over and over again whilst each time expecting a different result.

Don’t get me wrong, I still make Wales the favourites for this year’s championship, but by golly it isn’t going to scare anyone with a bit of flair about them is it? Warren Gatland has now been in charge of Wales for two world cup cycles, during which you’d expect them to have developed different facets to their game that might allow them to compete with and possibly beat a southern hemisphere team. But, no, we just see a team determined to win by just banging a big guy up the middle time and time again until the opposition get bored. And the player who typifies this for me more than any other is Jamie Roberts. Now I do not doubt that he is good at what he does and what he does is what his coach wants. And I don’t doubt he puts 100% effort into doing that. But! Was he really man of the match against Scotland (and as some have claimed Ireland too.) I don’t think so, but this is where my point about the lack of concern about the way teams, and in particular Wales, are playing shows. 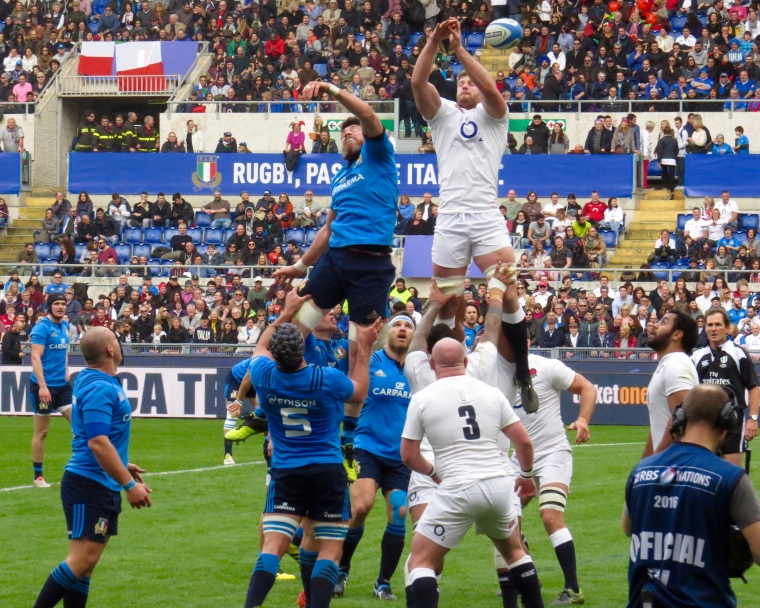 In Saturday’s game Jonathon ‘Its On’ Davies was on commentary during which he called overlap after overlap for the Welsh three quarters to exploit only for the ball carrier to cut inside or take the contact and go to ground, allowing the Scottish defenders time to regroup.  In almost every example the player cutting inside, not looking up, not distributing and taking contact was Roberts. And in every occasion he did so he made minimal yardage. In fact after 60 minutes the leading metres made in the game was by Stuart Hogg who’d left the field in the 23rd minute. It is dull, boring and attritional rugby that a team with good patient defence will soak up before the attacking team kick possession away and put themselves under pressure. And it is not as if Wales do not have exciting players. George North’s try was a highlight of the weekend, but I can only feel that this was scored in spite of and not because of the way Wales play.

And what about other nations? Scotland first. Abject against England but showing signs of genuine cause for hope against Wales. Their problems, it seem, are more to do with the mental side than any lack of talent or ability. Their remaining matches become more important now as one or two victories could mean the world to their mindset going forward. I definitely think they are only a win or two away from something special, but getting that win may becoming harder with each valiant but ultimately short falling defeat. Or in other words the story of Scottish rugby since 1996.

France are still an enigma. Guy Noves I can see is trying to instill some flair behind a nasty and brutal, and some may say, with some justification, an unsportsmanlike pack. Just like France of old, except they haven’t really got that flair player, a Blanco or Sella, to offer that bit of sparkle and je ne sais quoi. Until they find that key player, and that is a huge conundrum to which a whole essay could be given, they will still ultimately fall short. Two away games now against the Welsh and Scottish from which I fully expect one defeat and maybe two will set the French where they should be in the hierarchy as opposed to their false position at the top of the tree to date. 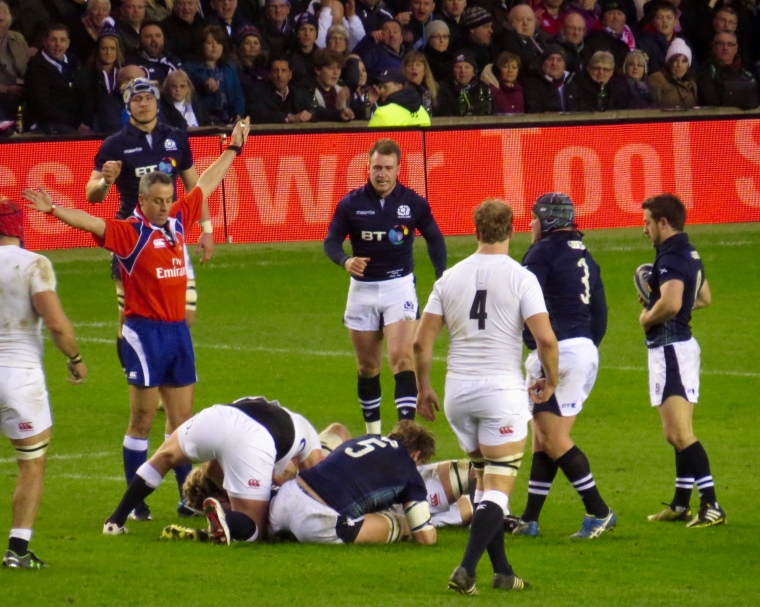 So is it all doom and gloom? I’d say no as two nations have, on reflection, done more good than bad. Firstly, Italy, who were abject at the world cup, have at least shown some aggression, some fight and some intent to attack. How much that has to do with the return of Sergio Parisse is a moot point. What is for certain is they have a pretty good 10 in Canna, they have embraced a more attacking mindset and by no means are a pushover (despite what England did to them in the second half of their game.)

Which brings us to England. Firstly, I am an England supporter and therefore I can be open to claims of bias. But, I have, after the first two weeks upped my levels of confidence in where Eddie Jones is taking the team and squad. Sure, there are things he has done that I don’t agree with, Hartley as captain, Robshaw and Haskell in the same team and his best 10 playing at inside centre, but as a whole I think the team is playing with ambition, confidence and bravado and is developing nicely. Certainly I can see the potential in this squad, especially the way new players such as Itoje and Clifford are being integrated, that bodes well for this World Cup cycle. Are they executing well enough to win this year’s six nations? I’m not sure, I still think Wales are favourites, but I do think they are developing along the right lines and in comparison to the other nations who appear to have learnt little or nothing from the last world cup I am more than happy.

What else have we learnt? Primarily we have learnt that the level of refereeing is not uniform at all. And most of all that Jaco Peyper is not international standard. His refereeing of the France Ireland game was inept to say the least. The biggest issue seems to be his lack of confidence in what he should be doing. To watch Yoann Maestri commit a deliberate act of foul play directly in front of him, to not blow or even ask the TMO to take a second look, was inexcusable. And to compound that error the TMO not even tagging it worthy of review was even worse. And speaking of TMO’s, they are in danger of creating more problems than they solve. Too many of the referees rely too much on their TMO’s to make decisions on the field that they should be with one notable exception, that being Glen Jackson who in the England Italy game was prepared to trust his own judgement and make decisions based on what he saw and his own experience. As a result the game flowed and we saw, eventually (once England had moved up a gear), some free flowing and exciting rugby played.

And lastly something I thought I’d never say but the coverage by ITV knocks the BBC into a cocked hat. Someone somewhere in the BBC needs to work out that John Inverdale in particular, but also Jeremy Guscott, a man described as able to put a damper on a kiddies birthday party, Jonathan ‘It’s On’ Davies and Brian ‘They’re feeding the scrum’ Moore, are terrible presenters, pundits and commentators. Compare them to the ITV team, and in particular Jonny Wilkinson and Maggie Alphonso, who on the whole (forget Sir Clive) give expert, unbiased and informative views in an engaging and entertaining way.  If the BBC lose the Six Nations and it goes to ITV I for one will not complain.

The question is now what should we expect to see from the forthcoming games this weekend. I don’t think that the games have clear cut potential winners in them, but I do expect to see three home wins. Wales vs. France will be an attritional battle where the packs will be at the fore and with the ball not going much further than 12 in open play. Italy vs Scotland I see as the hardest to call, but I think Scotland’s fragile mental strength and Italy’s home advantage will be the two key factors in this result. And England at home vs an injury ravaged, idea devoid and leaderless Ireland should result in a win for the red rose unless Ireland can frustrate and kick their way to victory.