My 3rd 2016 RBS 6 Nations game saw me travelling to Cardiff to watch Wales play France.  I try to make one 6 Nations in Cardiff every year, it really is my favourite place to watch international rugby.  So much so that I’m a Welsh Gold Member to try to make sure I can get my ticket, I’ve never watched England in Cardiff and I don’t plan to.  This Essex ‘girl’ turns all Welsh the minute I walk through the turnstiles. 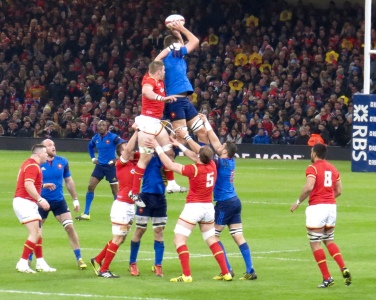 I’m not going to write too much about the match itself, more about the experience and of course I’m posting my photos from the evening. The trip was pretty smooth until I entered Wales at around 3:30 then I think it’s fair to say I queued!  Mind you it didn’t help that my Satnav took me through back roads to get to the Cardiff City Park and Ride from Jct 29 of the M4 rather than virtually straight there from Jct 33! I know which one I’ll be taking next time! 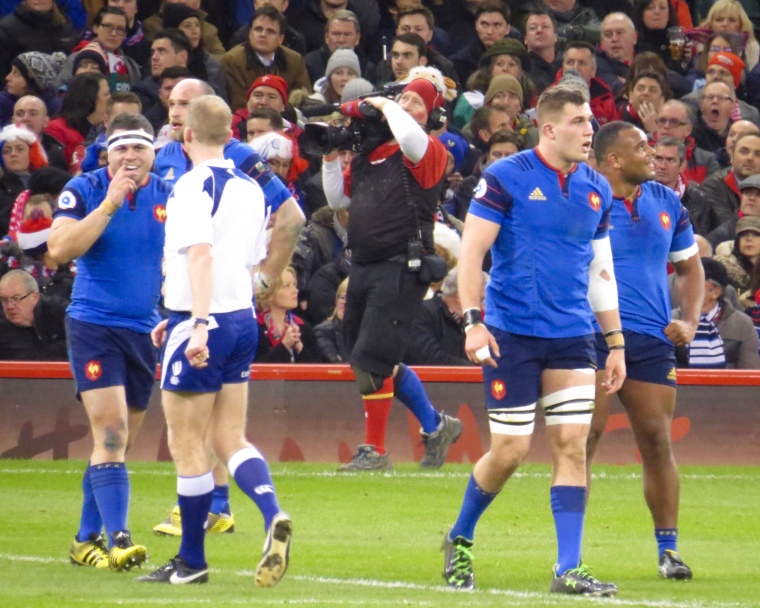 I had a spare ticket for the match so had company for a change, a rugby league playing friend Gareth met me in town and we went off in search of food.  Living dangerously we chose the quick, baked potato option in the St Davids precinct getting there just before a crowd and no potatoes!  I guess no one told them there was a game on. 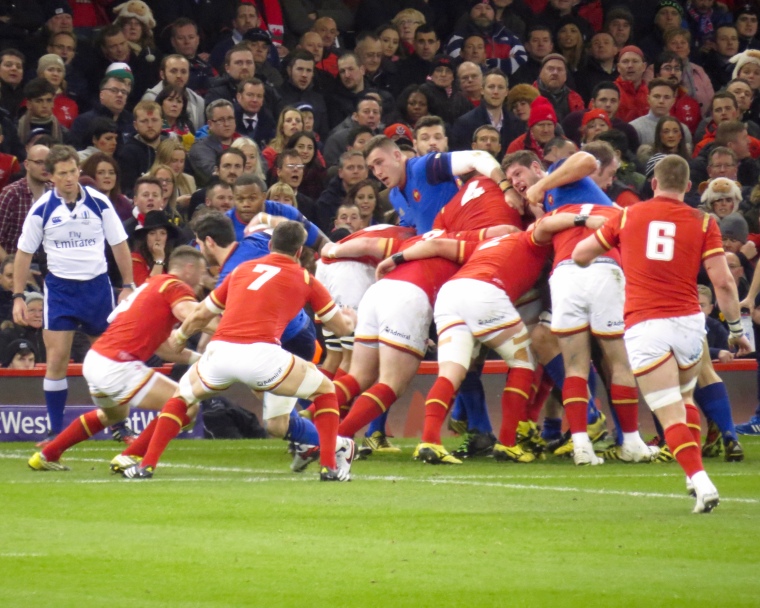 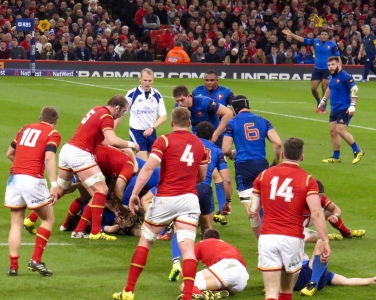 We made our way to the stadium after a few beers for Gareth, the pub had one of the scariest door ‘people’ I’ve ever seen!  You certainly wouldn’t mess with her! 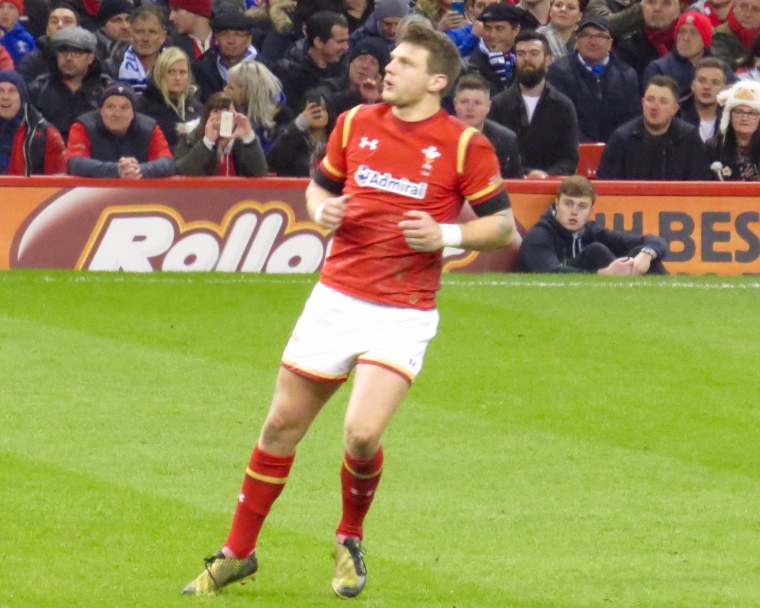 We had seats on the lower level – I usually go for the middle tier which in retrospect does have a better view.  To my surprise the roof wasn’t closed, that was I learnt later a technical problem rather than a deliberate intention. 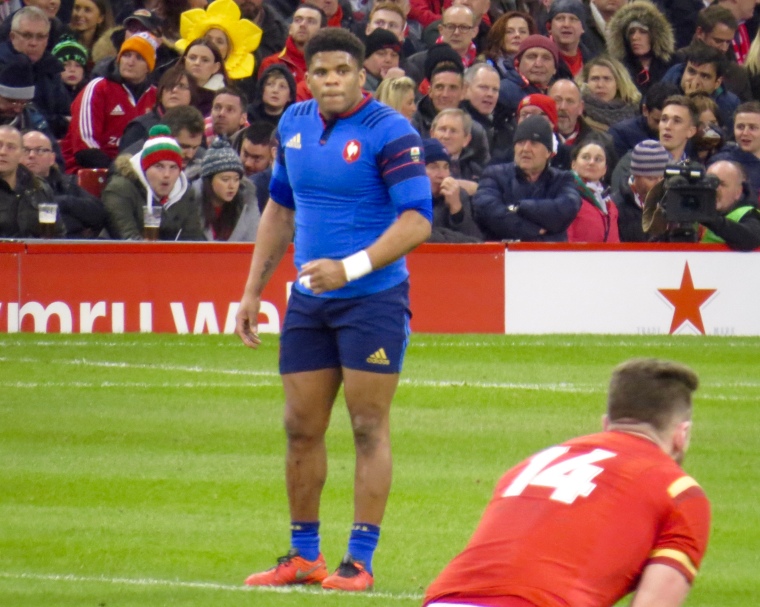 In spite of that the atmosphere was as always wonderful!  A huge part of the experience is in the build up and the singing of the Welsh Voice Choirs.  I sing along to as many songs as I can, and make it up when I don’t know the words.  It was a joy to hear Delilah ringing out again, after a silly ban!

The teams emerged to a huge cacophony, we had a minutes silence for the victims of the Fijian Cyclone – it was impeccably observed. 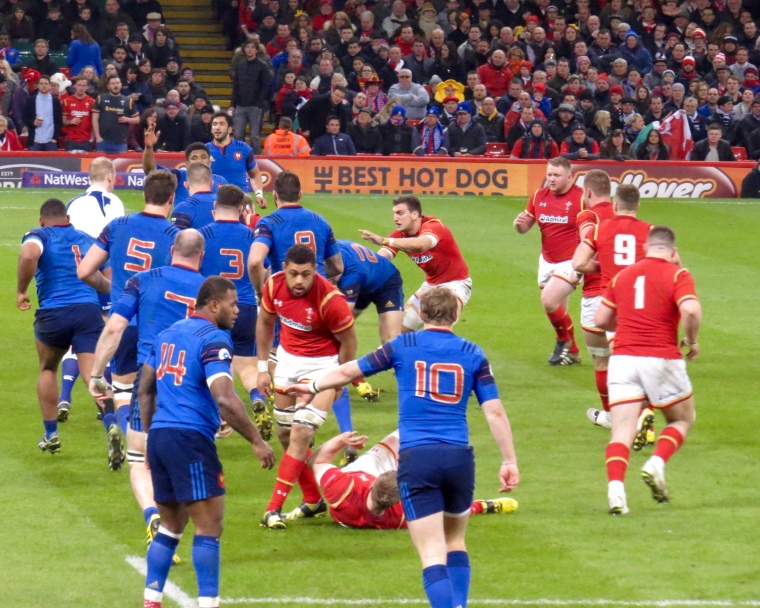 With the backing of the choirs both anthems were great – the Welsh anthem was spine tingling!  I really do need to learn how to properly join in, it’s breathtaking! Before i get into a little about the game I have a confession to make – I wore a Welsh Rugby scarf – so that means I now own a Welsh Rugby scarf!  It’ll come out when I visit The Principality Stadium – that just doesn’t feel right! 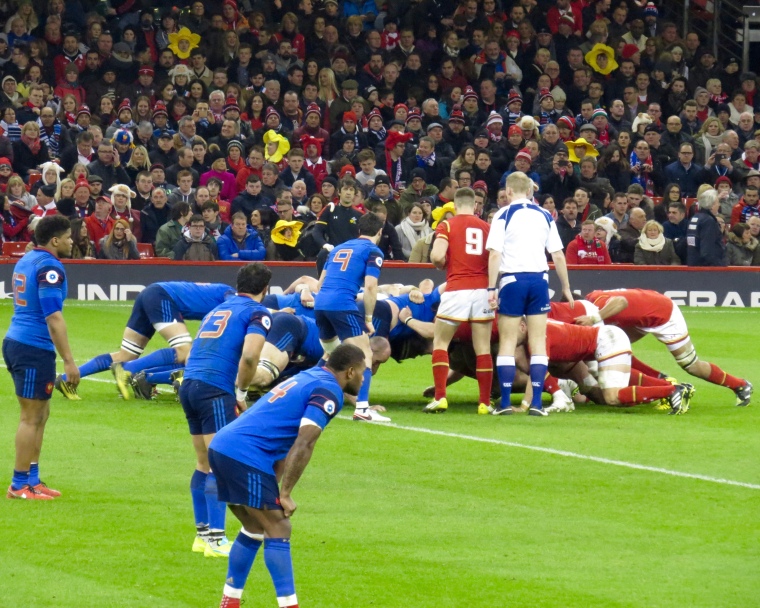 The French came to Wales unbeaten, the Welsh were similarly unbeaten but had dropped a point against Ireland.  The home team were looking for a 5th win in a row against the visitors.

As promised I’m not going to linger on the game – common opinion is that it was a dull game.  I have to say it was wholly different being inside the ground, soaking up the atmosphere.

Jules Plisson made an early schoolboy error kicking a free kick straight out.  That gave Wales territory and they were soon awarded a kickable penalty.  Plisson was saved from embarrassment – after his standard ritual – which by the way is fascinating to see live – Biggar missed the posts!  Highly unusual.

I’m not sure if the referee or the packs had a difficulty with setting a scrum properly but after taking an age to give the signal to Gareth Davies to put the ball into the first scrum it almost inevitably collapsed.  J P Doyle acting as Assistant Ref gave poor advice in blaming the Welsh.  Penalty awarded – penalty missed, although this was from the half way line for Plisson and it wasn’t far out. 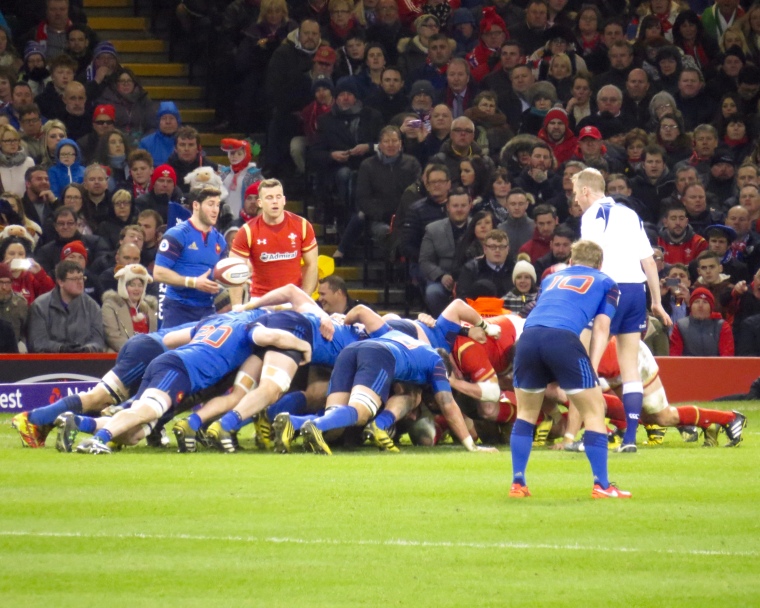 Wales were awarded their second kickable penalty Barnes spotted a shoulder barge on Taulupe Faletau by Paul Jedrasiak.  It was off the ball and well seen by the referee, it was a large hit and certainly didn’t involve any arms.  We had the Biggar strangeness (although he’s not a patch on Rafa Nadal) before he kicked the first points of the game.

The French flanker gave a perfect exhibition of how not to tackle, basically using his head to try to stop a charging Sam Warburton – Antoine Burban left the pitch for a Head Injury Assessment.  He looked to be in something of a state, yet returned later.  As this was being dealt with Dan Biggar capitalised on a further penalty as Plisson was penalised to holding on. 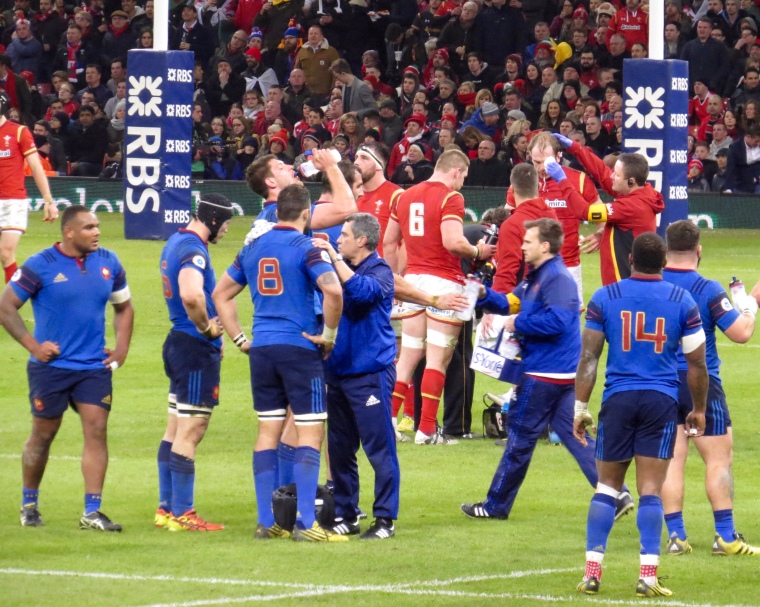 France had a promising attack through Virimi Vakatawa – however he was stopped in his tracks as he fell over, I wonder if the French had packed the right studs?

Dan Lydiate was penalised moments later as he repeated a move that saw him yellow carded in a club game, he basically fell at the feet of the attacking player, it wasn’t as much no arms as literally no tackle!  Very bizarre by Lydiate!  The Welsh crowd were unhappy that the ref went back to the incident, but he was being consistent.  Plisson kick the 3 points.

The half finished without further ‘excitement’ with the score on Wales 6 France 3.  As far as the other game stats went Wales had 50% of the possession and had made 191 metres to France’s 86, and 63 carries to France’s 49. 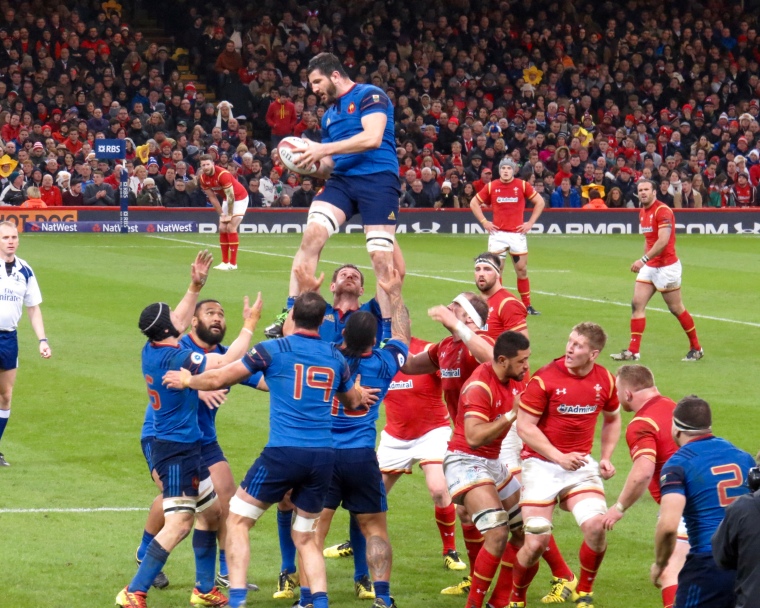 We had some actual excitement in the first few minutes as Wales seemed to find their attacking flair.  There were many ooh’s from the crowd as Alex Cuthbert appeared to be on the receiving end of a tip tackle by Jonathan Danty.  Biggar to a degree threw the attacking position away with a speculative kick that went too far.  The tackle was checked and watching it on the TV rather than in the ground, it certainly was a tip, but I agree with the decision to keep the cards in the pocket.  A penalty yes, a card, no.  An easy kick was converted to extend the Welsh lead.

Jonathan Davies looked to have made a rash kick after Wales took the ball after a French knock on, but George North stormed down his wing, hacking at the ball, his attempt wasn’t the best, but I’m afraid poor old Plisson’s attempt was even worse, he virtually flicked the ball up into North’s hands who went over the line to score.  A try at last!  The try was very close to where I was sitting so it gave a great chance to watch Biggar cary out his strange ritual.  Weird but effective he added the extras.

Having said I wasn’t going to write loads I have lingered somewhat; I am however going to cut the rest of the match short.  Biggar added a further 3 points after his team weathered concerted pressure from France.  This spell and the latter part of theme were a testament to the Welsh defence in spite of the fact it was breached with captain Guilhem Guirado trundling over the line with the rolling maul on the 79th minute.  The try was converted but it was too little too late.

I’d judge that Wales were very lucky not to see yellow with the number of penalties conceded in the second half.  Overall they were penalised 14 times to France’s 8.  Other key Stats can be found here – The match in numbers and %ages

Not a classic for sure the game finished with the score on Wales 19 France 10 – setting up what will most likely be the Championship Decider at Twickenham on March 12th (I’m writing this knowing the result of the England v Ireland match).  Every time I visit Cardiff for rugby my feelings about the stadium and the experience are reinforced!  I love it!