All to play for at the business end of the season

Having missed my opportunity to visit the Ricoh Arena when the Tigers visited due to a swollen, fairly immovable knee, I took my chance to go and watch what would be a key game at the business end of the season. 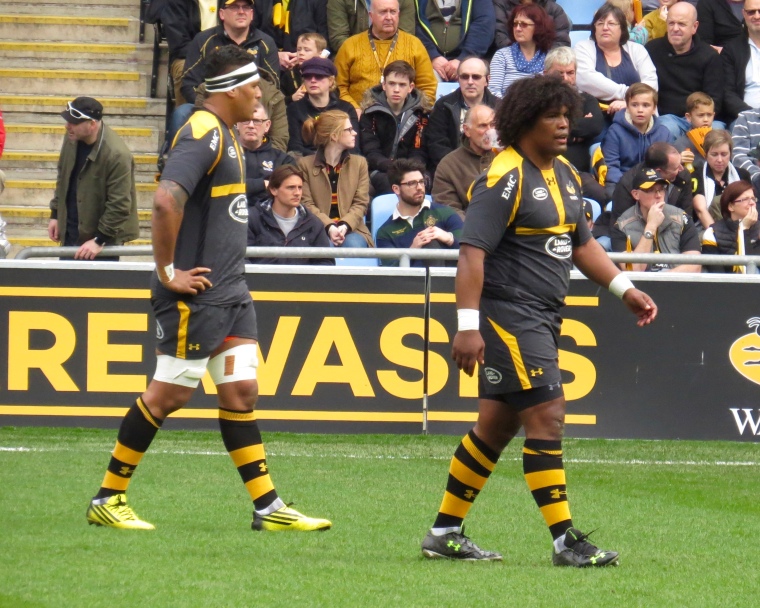 Wasps had come into a fine run during the 6 Nations window – seeing them win 6 of their 7 games played.  That included an incredible result and performance at Allianz Park against Saracens the league leaders – they beat the champions by 63 points to 23!  I was in Rome watching England that day and must confess I couldn’t quite bear to watch the match, being a Saracens season ticket holder! 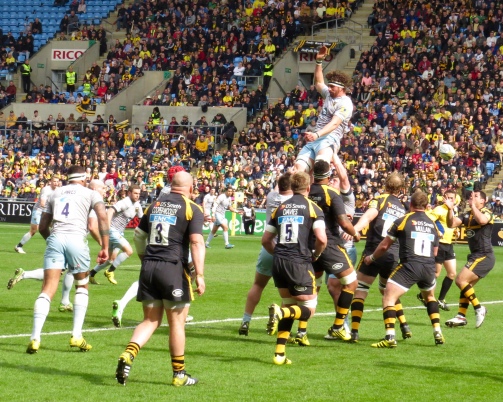 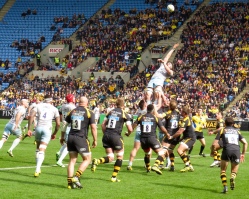 Northampton Saints had 5 out of 7 wins to their name in the same period – they also had a win at Allianz Park to their name.  Both teams were coming into this game with high expectations. 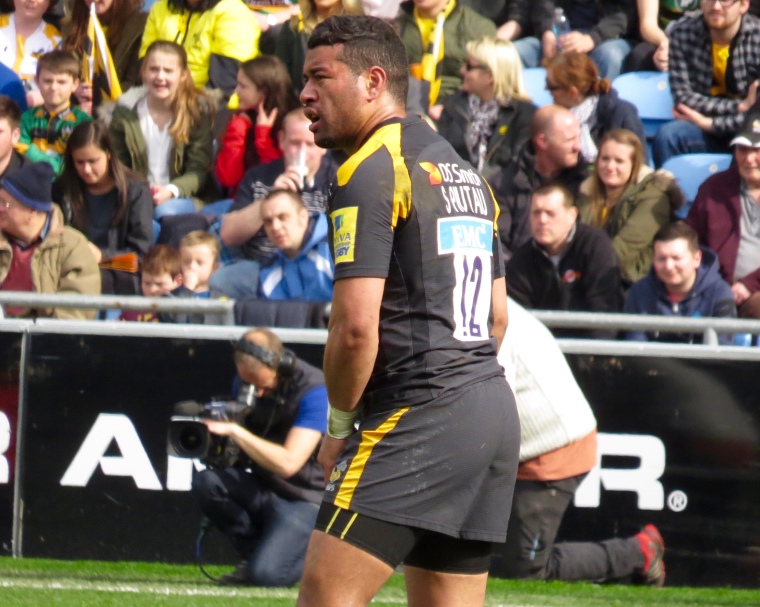 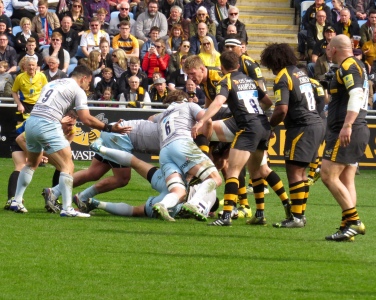 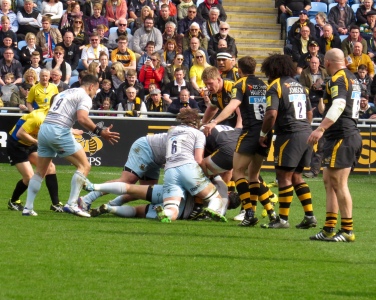 Before I talk about the match, a little about the venue and experience.  With a knee that still isn’t quite operating properly I booked on site parking at £10, reasonable compared to some other grounds.  It was however all a bit odd as there seemed to be no spaces in the area I booked for.  But there was no drama – a member of staff opened up access to another set of spaces. 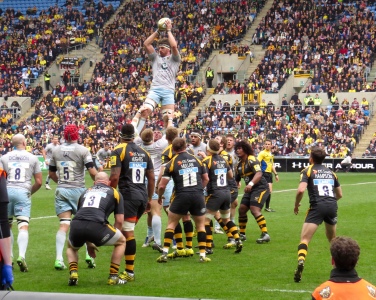 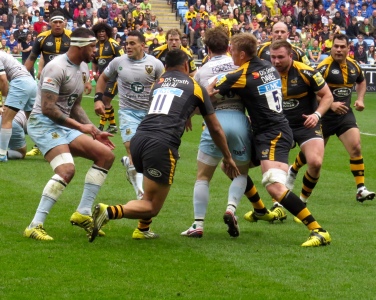 I’d planned to meet some fellow Rose Army people pre game, the signage at the ground has improved but it is all still something of a mystery at times.  I did however manage to find Andrea, a Tigers fan, and we made our way to the Fans Village to partake of a carvery and meet a few others. 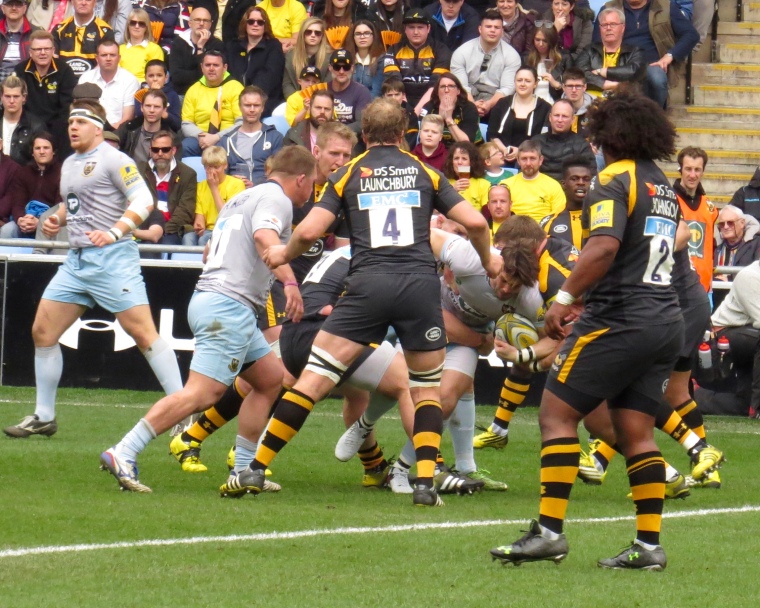 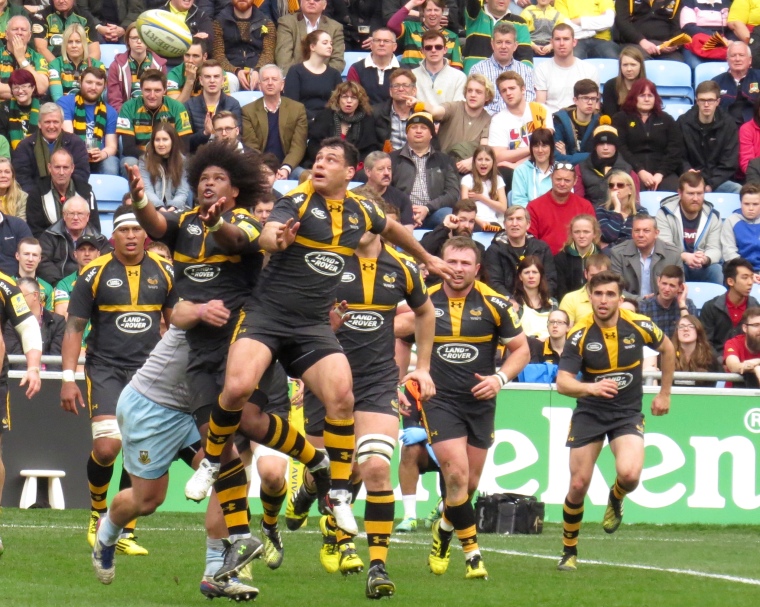 Wasps benefit from the pure size of the Ricoh Arena in having a large area indoors fitting in food and drink outlets with plenty of seating for fans.  The carvery was £10 and provided a pretty decent pre match lunch.  We were joined by Karen , Anthony, George and Luke.  All part of the Rose Army – a group of people put together by O2 to support the England Rugby team for the World Cup.   A great bunch, it’s likely to mean none of us are alone at a rugby match from now on. 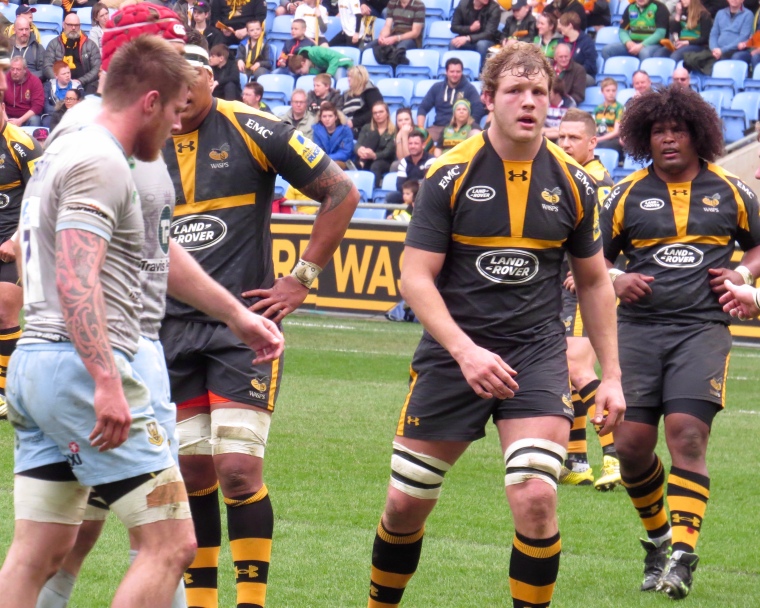 We went our separate ways as game time approached, my seat was close to the halfway line in Row B – I think I’ve probably learnt that I need to be higher up, the view was often blocked by water carriers, subs, physio’s etc.  But with an unimpeded view it was really rather good!

The game wasn’t quite what I expected – I’m not sure if the expectation was too great but both teams seemed to have difficulty getting the basics right. 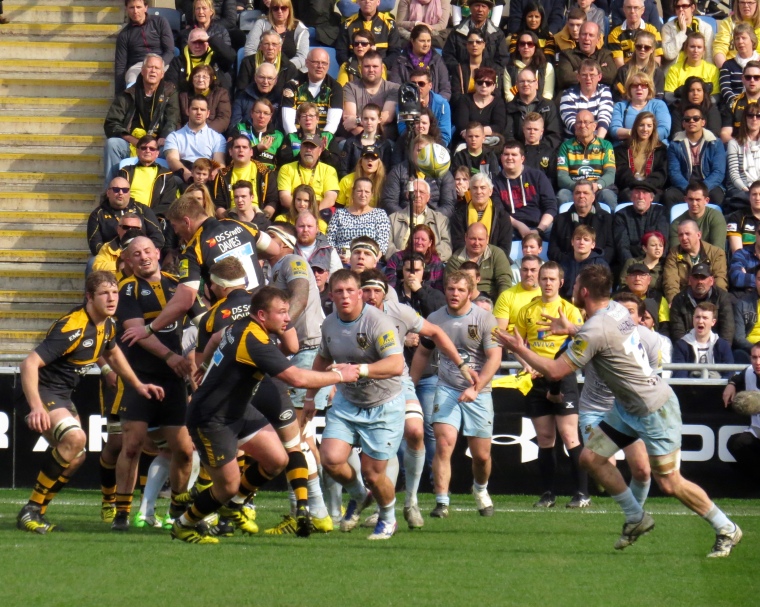 Stephen Myler had the first opportunity after 2 minutes to put points on the board – I was surprised to see the Saints man looking like he was modelling himself on Andy Goode (sorry Stephen) – he slotted the ball over the posts to put the visitors ahead. 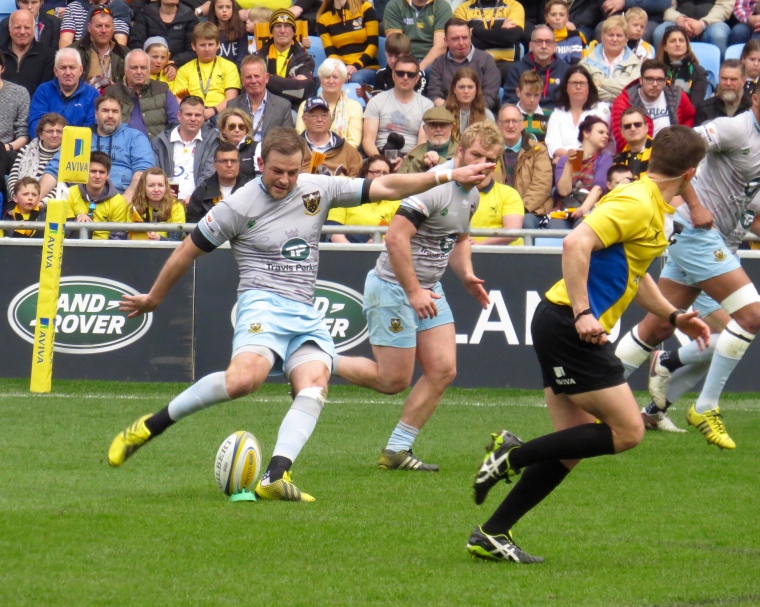 Wasps were awarded a free kick from the first scrum and with quick thinking first by Craig Hampson on loan from Bristol at scrum half, then by Nathan Hughes they went soaring up the field.  Fullback Rob Miller looked to have scored, but strong work by Teimana Harrison saw him held up. 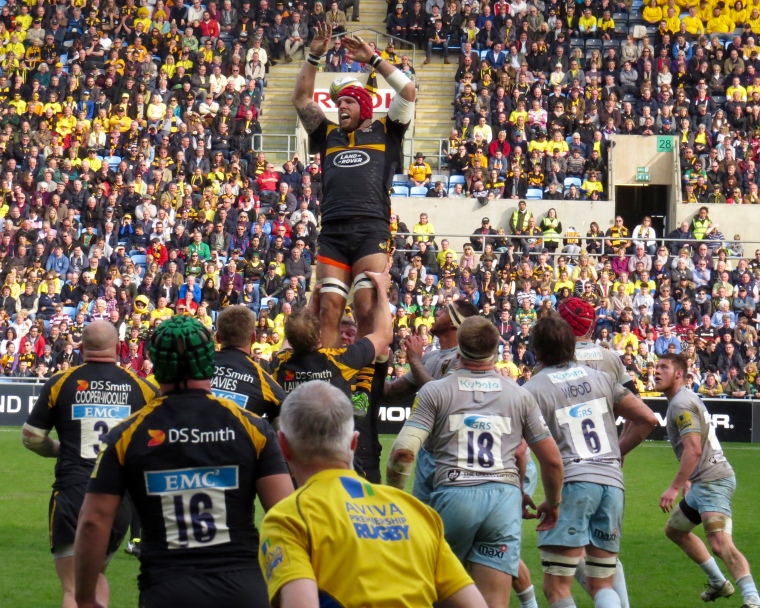 A futher opportunity for points was missed when Jimmy Gopperth didn’t hit the target after a scrum penalty. He made no such mistake minutes later however and the scores were back on an even keel at 3 apiece.

We had a fairly long stoppage after Kieran Brookes attempted to tackle Ashley Johnson, his head was at completely the wrong angle and he took a heavy knock.  It was good to see time being taken and also good to see him well enough to walk from the pitch, that was the end of Brookes game however. 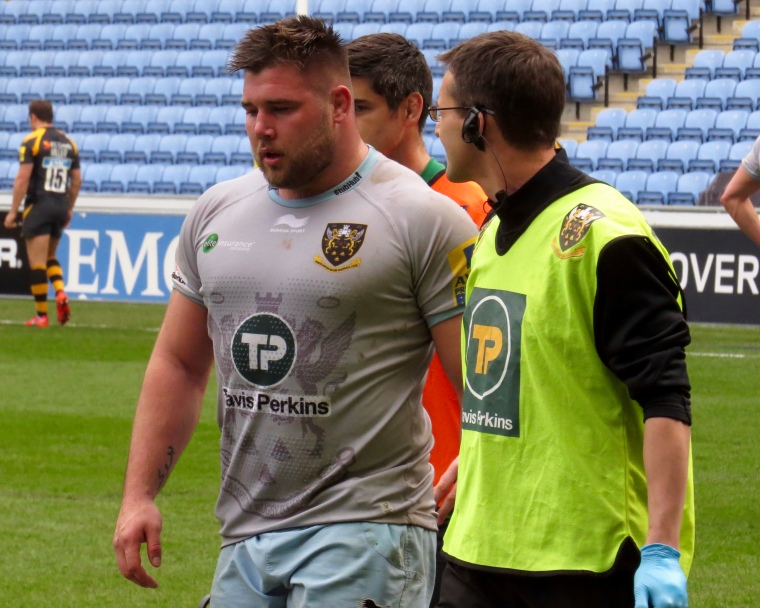 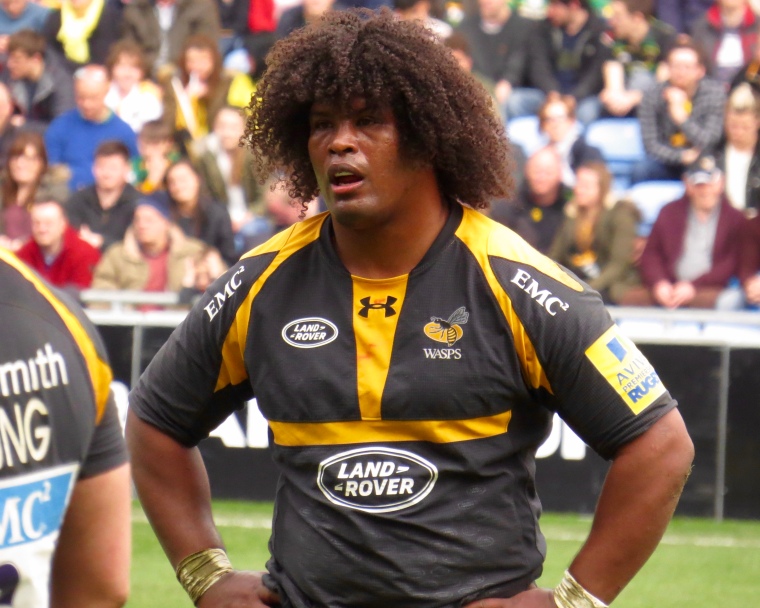 A high kick by Myler was plucked out of the air by Frank Halaias the game went into the second quarter,  George Smith (superstar!) took the ball from Hampson as he collected it from the ruck, he found space and high tailed it up the ground passing to Thomas Young (son of Dai) who in turn passed to Miller who got his try this time.  It was a shout out loud exciting score! Gopperth added the extras.

We were to have no further points in the half – I’m going to go away from the norm and give some stats for the whole game at this point, they don’t make joyful reading for either team in certain aspects.

I’d say other than the penalties the most damaging stat for Saints was the kicking – they just didn’t work against Wasps.  The lineout scenario for Wasps was quite frankly weird! Losing 8 should have been a disaster!

One incident of note for me involved Ben Foden, he disagreed with the decision of the Assistant Referee, his feet were out of play but in the eyes of the official the ball had stopped, therefore he awarded the throw in to Wasps.  This happened right in front of where I was sitting – Foden fully shouted in the face of the man with the flag, unacceptable to me.  And a worry after seeing Anthony Watson’s behaviour after he received a red card on Friday evening.

Back to the matter in hand, Elliot Daly had one unsuccessful attempt at a monster kick early in the half, but scored a wonderful 3 points from within his own half minutes later.  Myler pulled the 3 back with a simpler kick moments later. 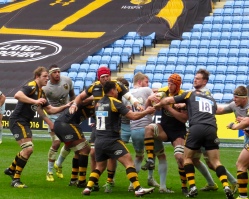 There were 2 sons of coaches on the field – as mentioned Dai Young’s lad Thomas for Wasps and the highly impressive Harry Mallinder in the centre for Saints.  Mallinder standing at 6ft 5 threw his arm at Christian Wade clearly hitting him around the head.  The officials looked at the tackle and judged it to be a penalty with no accompanying card, I’d judge that Mallinder was lucky.

With Dylan Hartley sidelined by his concussion suffered in Paris and Brookes led from the field in the first half it will have been a huge blow to see Lee Dickson stricken after a collision with Daly, it looked like an arm across the head watching the game again.  Having been substituted, Kahn Fotuali’i was sent from the pitch by the referee after he attempted to replace Dickson. That clearly won’t have helped the visitors cause.

James Haskell came into the fray with 20 minutes to play – he’s been like a cat on a hot tin roof throughout – and was I’m certain throughly warmed up, having been at it since the first half.  In his second spell at Wasps he’s highly popular with the home crowd.

Rob Miller scored his second try after George Smith again sent him a perfect pass, putting him into space he showed his heels to the Saints defenders to score another cracker! Gopperth extended the lead.

Saints showed some invention running the ball from their own line, with Tom Collins putting his foot on the pedal to sprint to halfway until the ball was dislodged when Smith halted him.

Daly hit another wonder penalty to take the game away from Saints and a third try for Wasps scored by Substitute Jamie Stevenson took the score to its finishing position of Wasps 30 Saints 6.  With European Rugby up next both will need to show improvments in the basics to progress.