All About The Sport!

Guest Blogger Monica explains how a passion for Sport comes about!

Guest Writer Monica looks back over a life time of sports appreciation.

I was born in Scotland, the elder of two sisters. Growing up we were both exposed to sports, with Grandstand and World of Sport our television fare. Football and  wrestling primarily. A move to England in 1969 saw us living in Stratford, East London. It was a real treat to return in 2015 to the Anniversary Games, and to see the regeneration of the area after the 2012 Olympics.

Secondary school was very near to the Boleyn, West Ham’s ground, and I saw the triumphant winners parade of the FA cup in 1975, after beating Fulham. I loved being a part of such an occasion, just wish I had the technology of today to capture the moment.

Rugby became a part of my life in 1978 when my then boyfriend played for Eton Manor, a huge guy, he had a passing likeness to a certain Mr Will Carling!

In 1979 the family moved to Wickford in Essex and I remember following Alvin Martin (Hammer  of the year) for part of the way!

A move to work in the City in 1980 changed my life in more ways than one, and I had to accept cricket would become a huge part of my life if Kevin and I were to have a future!

Knowing nothing, I learnt to score, as I didn’t want to do the teas! I had the full range of colour pens and became the Wendy Wimbush of the Old Ruts, and learnt all about a front only tan!

Over the years I have followed cricket, squash, F1… In fact most sports, although not really a lover of golf!

Six nations rugby has become a must to watch, and in no small way, my friend Debbie has provided me with opportunities to see games in four of the six nations. I managed Italy earlier this year, leaving only Ireland to visit.

Debbie and I met through work and I can still recall a presentation she did on the differences between the 2 codes of rugby at a training course we attended.  It seemed random at the time but having attended a rugby league game together I can see where she was coming from!

As a Scotland supporter, naturally, a highlight for me was meeting Gavin Hastings at Murrayfield in 2015. Although meeting David Beckham in 2003 was also an experience I will never forget, after my eldest won a competition to train with him! 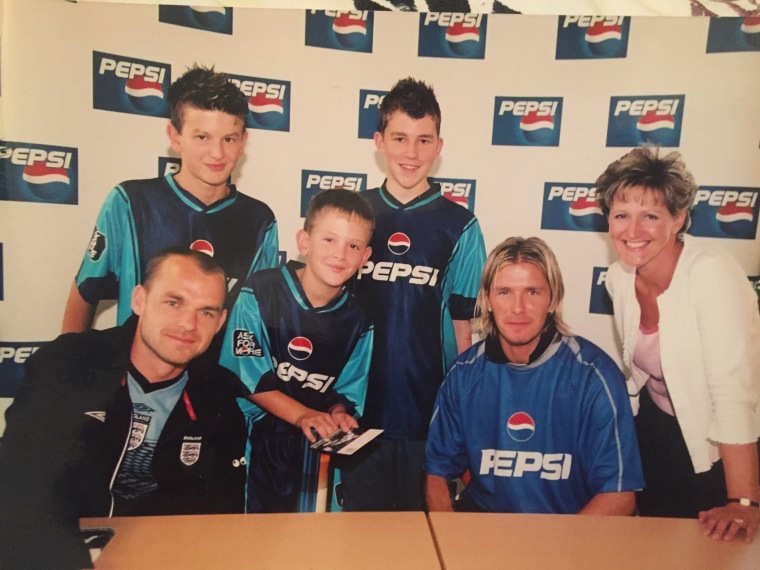 With my eldest now living in Melbourne Australia, I was fortunate to see South Africa play Australia at the MCG in 2014, and I plan to take in the F1GP at some point.

This year I have had my usual six nations ‘fix’ and have got Wimbledon tickets from the ballot for Men’s Finals Day!

I have a couple of Rugby Autumn internationals lined up, and am planning an Ashes fixture in Brisbane in 2017, as well as a trip to the Caribbean in 2019.

Phew! I absolutely love watching sport, hate to participate, and admire those that dedicate their time and talent to produce, on occasion, astounding performances and delight the crowds that attend.