With Judgement Day IV on the horizon I was pleased to be able to make the journey to Cardiff to see the 4 Welsh Regions in action as they played a round of the Pro 12 Competition.

2 games of rugby in the renamed Principality Stadium for a bargain £10 was too good to miss!  This year saw Cardiff Blues v The Ospreys and Newport Gwent Dragons v Scarlets.

Crowds had been growing for this event and previous records were smashed with a crowd of 68262.

I arrived nice and early as I’d been lucky enough to receive Media Accreditation for the games, the only shame was that I wasn’t allowed to take photos because of where I was sitting.  This felt a bit strange as I could have taken photos galore had I been sitting in the seat I paid for.  Perhaps it wasn’t realised that my photography isn’t for financial gain.  (I did take a few before I was forbidden as you can see) 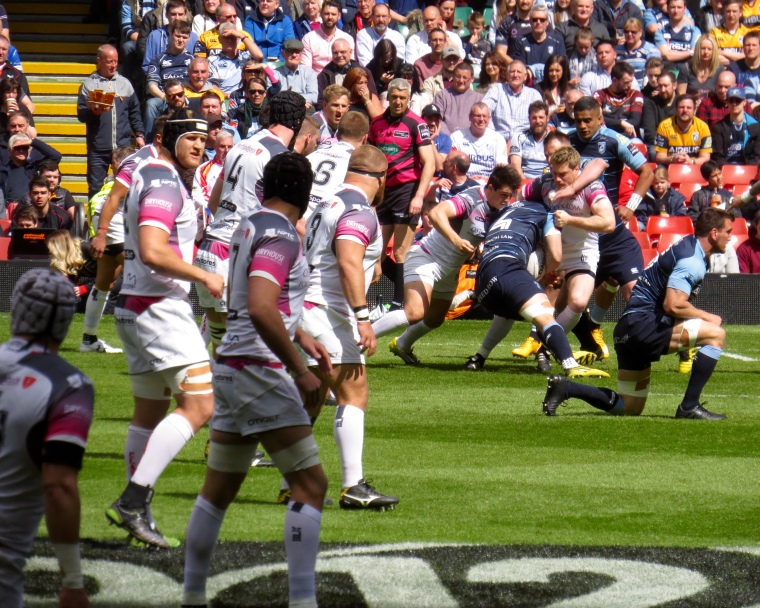 The crowd was very mixed, the price makes Judgement Day highly accessible, making a visit to the wonderful Welsh National Stadium a possibility for many who could neither afford to come to an international nor get hold of a ticket if they could.

This meant that there were many children which was great to see, but it also meant there were more than a few who were more interested in the alcohol than the rugby on offer.  From where I was sitting I could see 2 young ladies who literally sat with their backs to the 2nd game.  There was also potential for unpleasantness when a group of young lads fell foul of a man who clearly was there to watch the rugby. 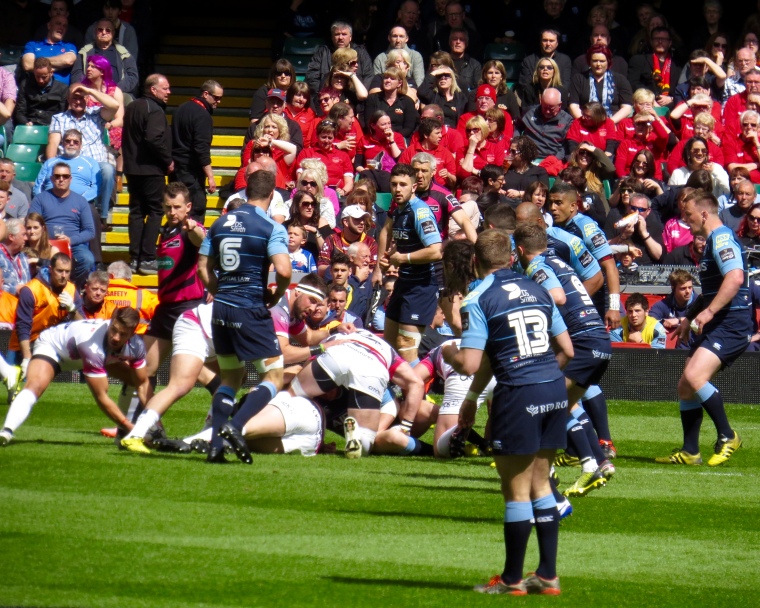 With the advent of Dual Contracts in Wales all 4 teams featured international stars.  Amongst the opening fixture the Ospreys with Dan Biggar, Rhys Webb, Scott Baldwin, James King and Dan Lydiate in the starting 15 and Rory Thornton on the bench had 6 of their 8 contracted players on show.  With Dan Baker and Alun Wynn Jones missing. 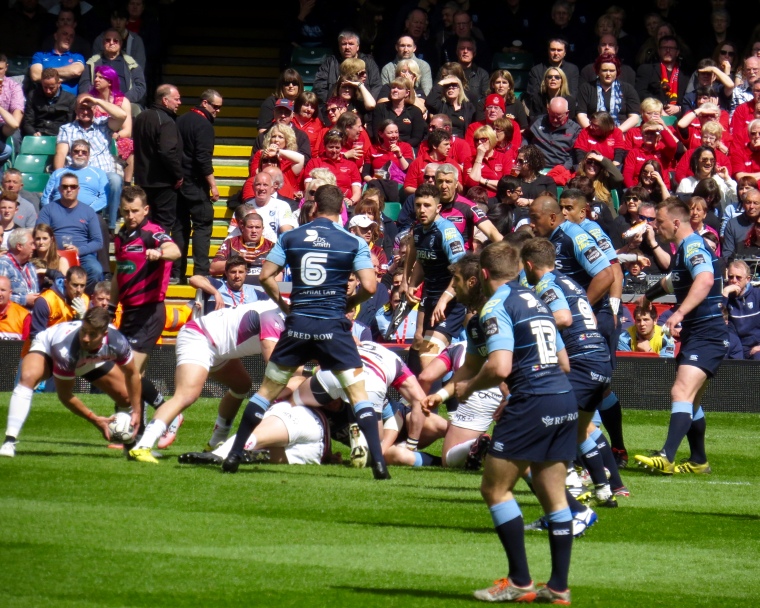 Lining up against them for Cardiff Blues were dual contracted Gareth Anscombe and Sam Warburton.  I’ve been lucky enough to see the Welsh captain play live on several occasions but this would be my first sight of Anscombe in the flesh. 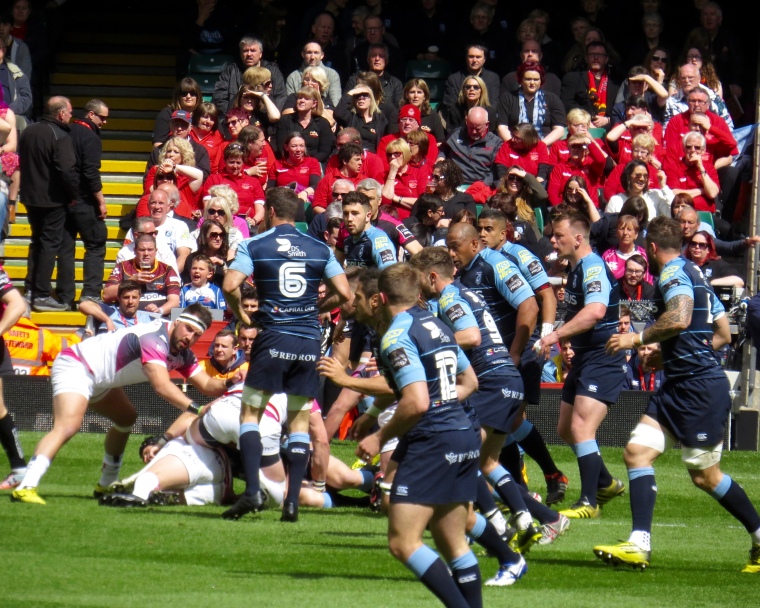 I’m not going to linger too much on the actual games but it’s true to say that both were very much games of two halves – it’s amazing how often that corny saying rings true.  I don’t think it’d be wrong of me to describe the first half as dull – there was very little going on to excite.  The score at half time was Cardiff Blues 9 (courtesy of 3 Anscombe penalties) Ospreys 7 (A James King try duly converted by Biggar)

I’m very glad to report that the game came alive in the second 40 – to the tune of 7 Tries – what a difference a half time talk makes!

Anscombe had shone in what was a poor first half of rugby and it was his long pass to Aled Summerhill who was in space that saw Blues extend their lead as he ran in to score their first try.  Anscombe’s attempt to convert the try wasn’t the best and missed the posts by some way.  He didn’t miss his next shot at the posts after a scrum penalty was awarded.

A piece of magic from an unlikely source – in the shape of second rower Rynier Bernando – a superb pass through his legs, saw Hanno Dirksen run in to score for Ospreys.  Biggar failed to convert the try. 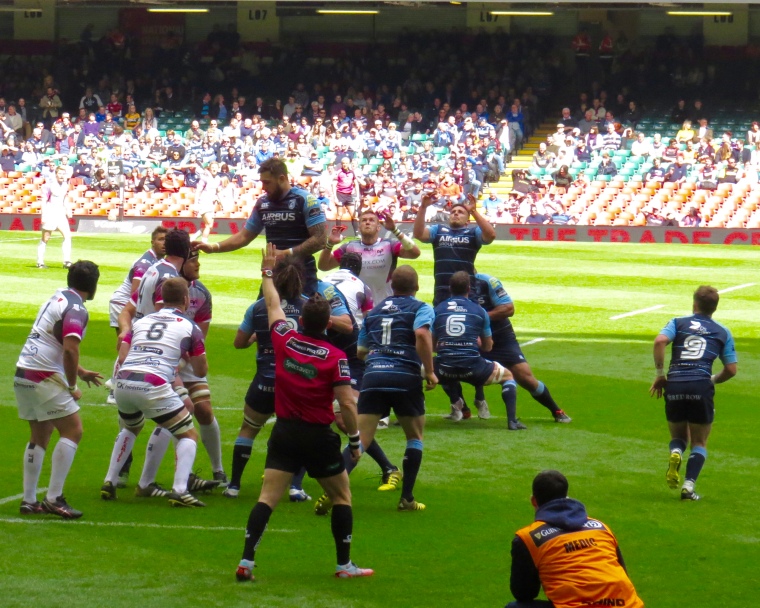 Dirksen was the beneficiary of a great run by Owen Watkin, followed by a chip from captain Rhys Webb, Watkin caught the ball after the bounce beat Tom Isaacs – a quick pass to the winner saw him score his second try.  Beggar’s conversion put the Ospreys ahead.

However that lead was short lived as Josh Navidi broke through 2 would be tacklers to score from 25 metres out, Anscombe’s conversion saw the Blues with a 5 point lead. 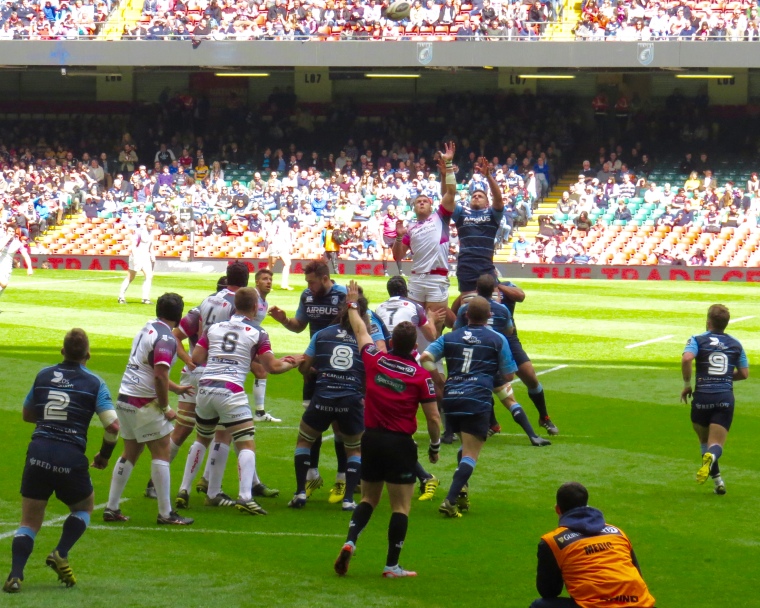 This was a lot more like it!  Exciting rugby!  Sam Underhill, much written about potential England international scored for Ospreys with 10 minutes remaining, powering over the line he took Kristian Dacey along with the ball!  Bigger added the extras and Ospreys had a bonus point and the lead.

Sam Parry made a very noticeable entrance when he came on for the injured Adam Beard, a  Hooker for a 2nd Row was an unfortunate substitution, the penalty Parry gave away from the restart was similarly unfortunate!  He blatantly blocked an on-rushing Blues man.  A penalty in front of the posts was duly converted by Anscombe – seeing the lead go back to the ‘home’ team! 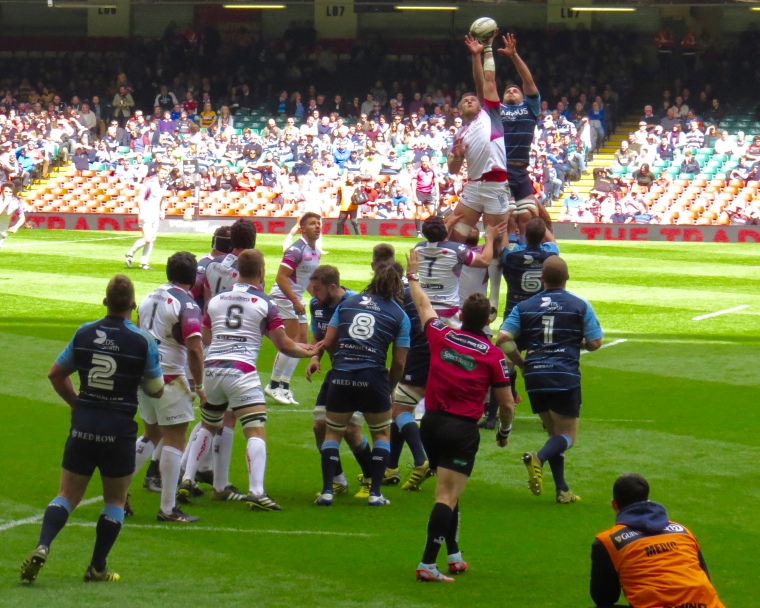 However captain Rhys Webb had more to say in the matter, backing himself he scored 2 tries to see his team not only secure the win, but also to deny Blues a losing bonus point.  Bigger converted both seeing the final score on Cardiff Blues 27 Ospreys 40.

The tries as well as his overall performance saw Rhys Webb receive the most votes to be named the Stuart Gallacher Man-of-Judgement.

Game two between Newport Gwent Dragons and The Scarlets saw dual contract players on both sides, Hallam Amos being one of two with Dragons and Samson Lee, Jake Ball and a very welcome Scott Williams being three of four with Scarlets.

The game was the polar opposite of the first, with most of the interesting stuff happening in the first half.  Scott Williams returning from injury made his mark from the off, scoring a try on 5 minutes, diving between the posts after Michael Colins and Steven Shingler had broken through.  Shingler add the extras with an easy conversion. 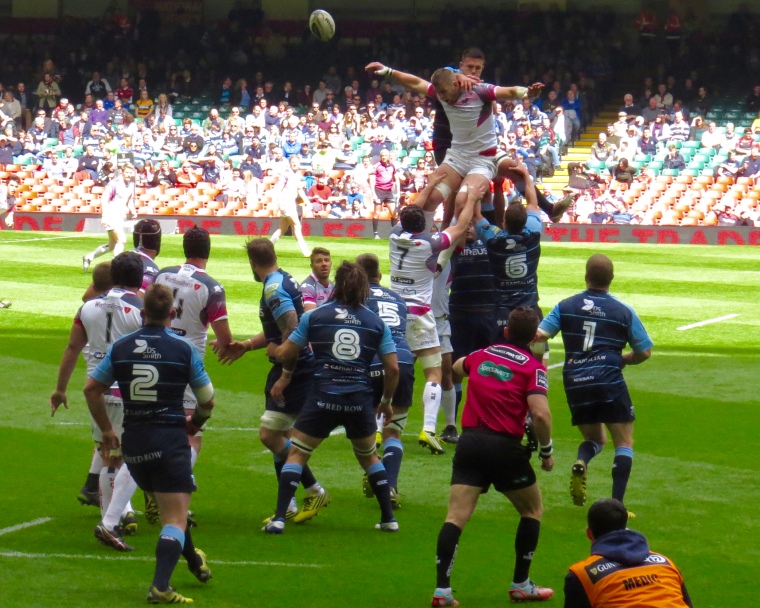 Shingler scored his own try 3 minutes later, duly converting it Scarlets were ahead by 14.  Shingler was also indirectly involved in the third try, this time it went the way of the Dragons as Rynard Landman charged down a Shingler kick, Adam Warren scored the try, Angus O’Brien converted to close the gap to 7.

Two penalties apiece for Shingler and O’Brien was the only scoring action up to half time and saw the teams go in at half time with the scores on Dragons 13 Scarlets 20.

In spite of the fact that 3 tries were scored in the second half it lacked oomph if that makes sense?  Steffan Evans scored for Scarlets extending their lead,  although Adam Hughes pulled the gap back with his own try.  Both Fly halves were successful with their conversions.

There was a notable international player on the pitch who hasn’t gone the way of a dual contract – Taulupe Faletau – he’s off to join the multitude of back row players at Bath next season.  He was quiet throughout the game I can’t say I noticed him much.  Worrying news for Warren Gatland was Sam Warburton’s departure with a shoulder injury, along with Samson Lee’s head injury.  Here’s hoping neither man misses the tour to take on the All Blacks.

I enjoyed my Judgement Day experience and will certainly be back if it fits in with Premiership Rugby fixtures!