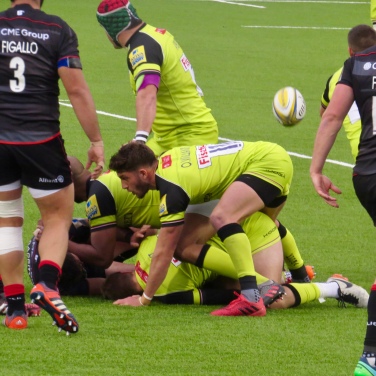 There was a time when as a Saracens fan a win against the mighty Tigers would be a great surprise but in recent years it’s become in a way an expectation, especially at home.  Although I never take things for granted and never underestimate any team. 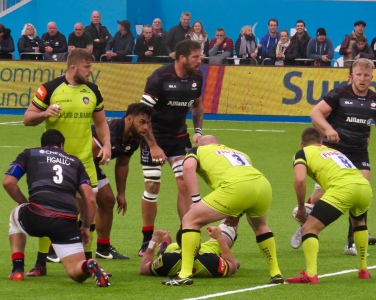 Saracens were without their second row duo of George Kruis and Maro Itoje, due to injury rather than England call up, which meant the ‘Wolfpack’ would have to stand strong  – Why exactly has the Saracens pack taken this name?  I looked for a definition of the wolf pack mentality and think I understand the why more – 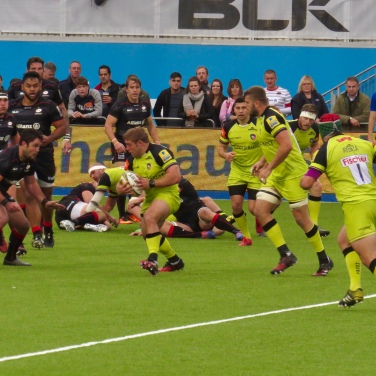 Pack behaviour – A pack mentality of extreme loyalty and devotion to the group binds the wolves together as a unit despite times of scarce prey or violence.

Clearly an opposition team isn’t prey and this Saracens pack aren’t looking for violence but as a group they certainly have the mentality mentioned above.  Jim Hamilton and Michael Rhodes took the places of Kruitoje.  Saracens fans aren’t used to seeing Rhodes in the second row but I’m told he played there in South Africa. 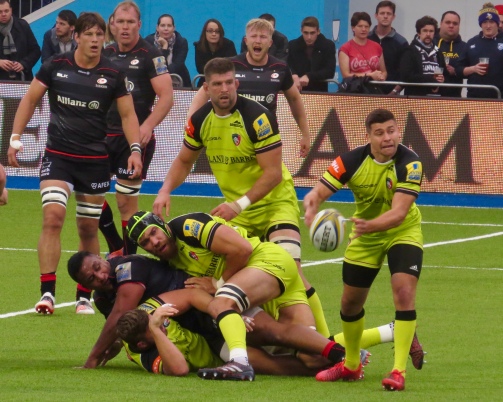 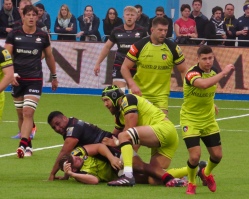 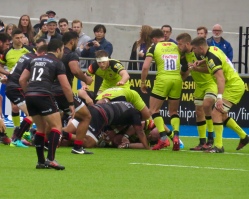 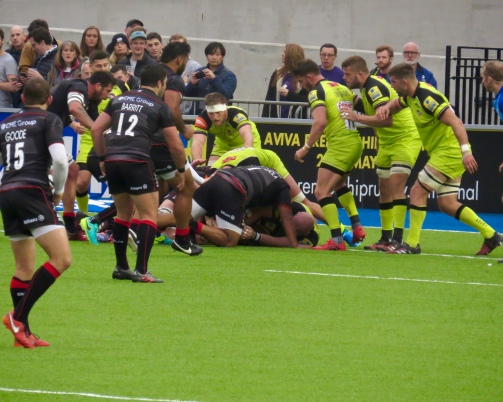 Saracens won 16 of their own lineouts and lost only 2, they also won 4 Tigers lineouts so I’d say on their prime role the 2 second rowers did a pretty fine job. 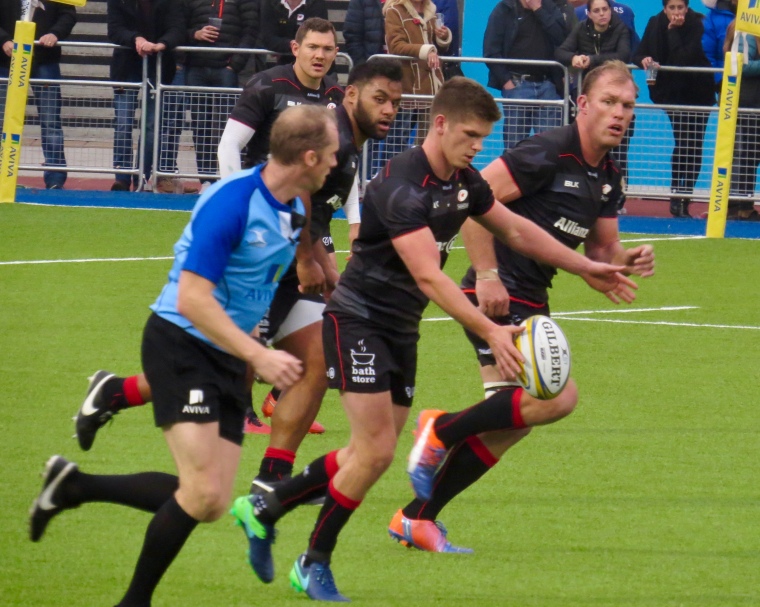 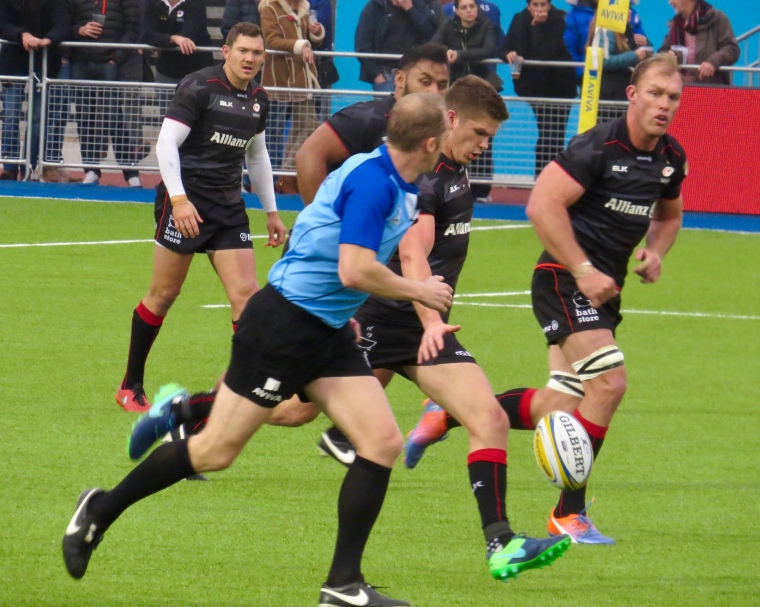 Leicester Tigers had been having a mixed season, they’d played 6 Premiership games and won 4, Glasgow had beaten them heavily in Europe before they themselves beat last years’ finalists Racing Metro.  I interact with a fair few Tigers fans and there was a lot of disquiet in various groups.  Which Tigers would turn up at Allianz Park?

In a nutshell the Tigers that turned up in the first half seemed to be in a state of disarray from an attacking viewpoint, they put together some good attacks only to fail on the final pass.  In addition both Owen Williams and to a degree Ben Youngs insisted on kicking the ball down the throat of Alex Goode, a player who’ll run the ball straight back at you.  They did it time and again and just couldn’t seem to find touch. 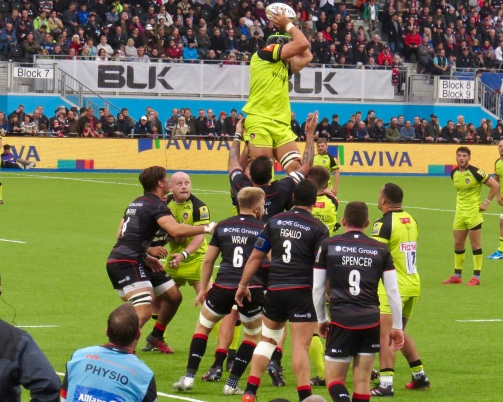 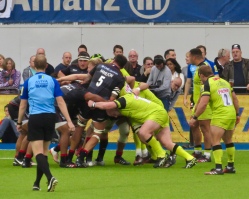 Chris Wyles scored the first Saracens try, with the ball reaching him on the wing through several sets of hands, there were 7 minutes on the clock, Owen Farrell converted the try and added a penalty.  Owen Williams who didn’t have a good game kicking the ball from hands closed the gap with a penalty.

Sean Maitland who seems to have settled into the Saracens way, scored in the opposite corner on 23 minutes, Farrell added the extras with a great kick.  It felt like the home team had dominated the half but the overall match stats, other than the scoreline, say differently. 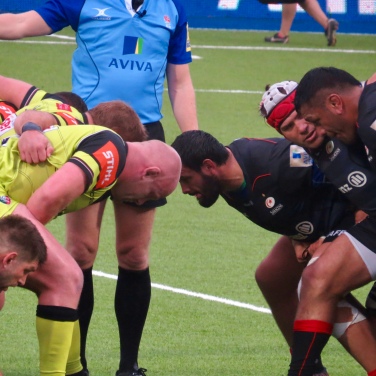 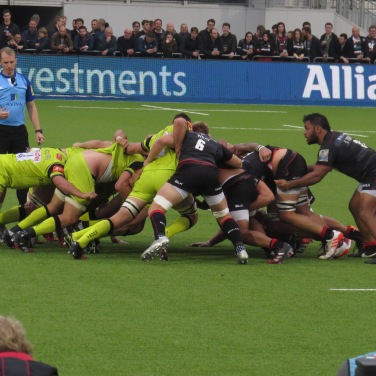 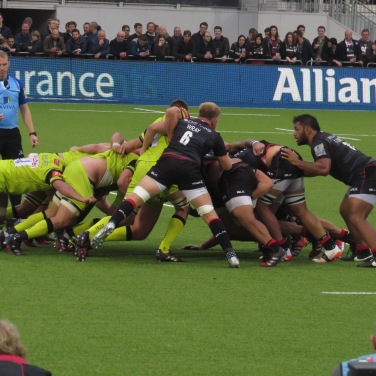 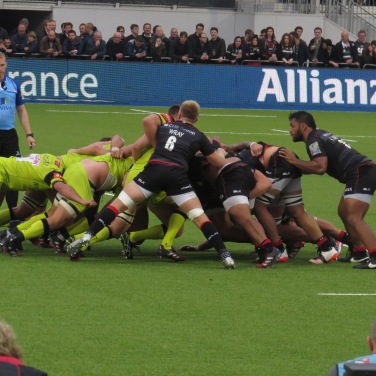 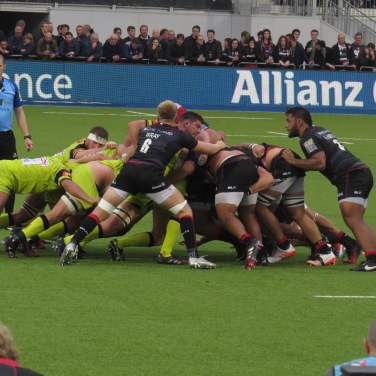 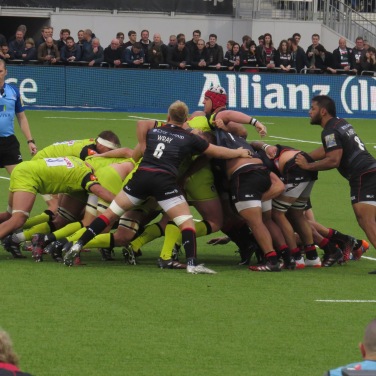 The Tigers made 537 metres to Saracens 405 and made 151 carries to the home teams’ 77, however those statistics didn’t convert into points until later in the second half.  Billy Vunipola added another try for Saracens 3 minutes into the second half however with the conversion stretching the score to Saracens 24 Tigers 3. 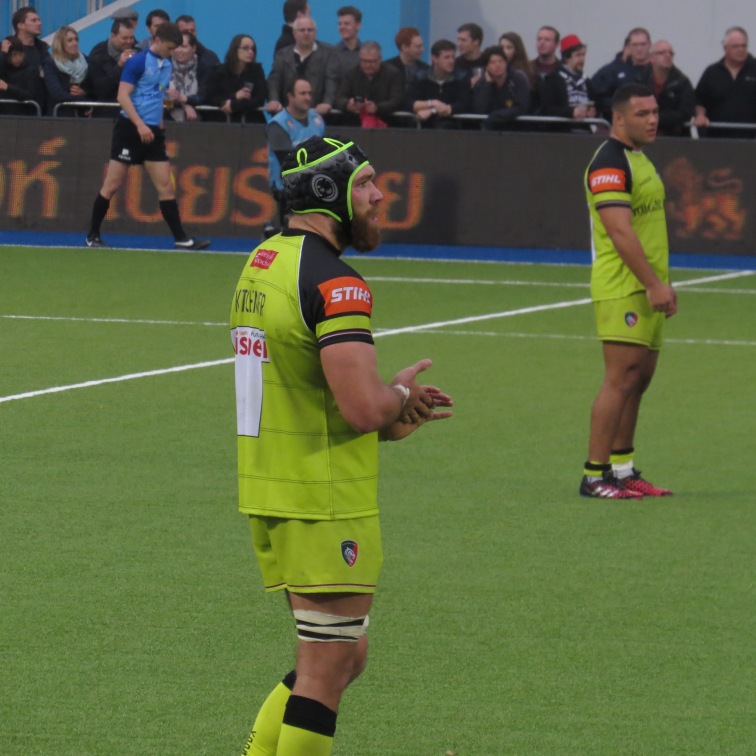 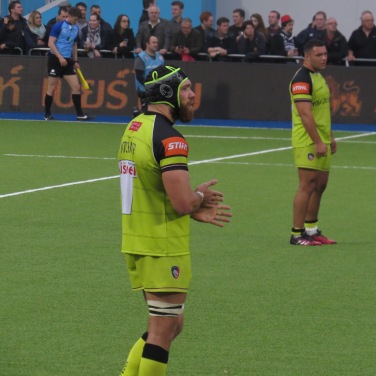 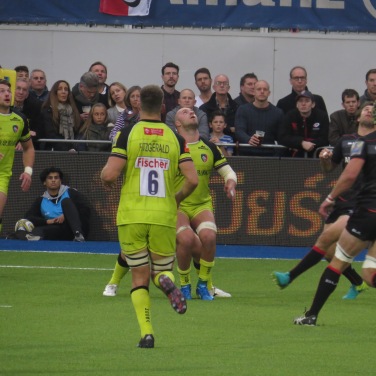 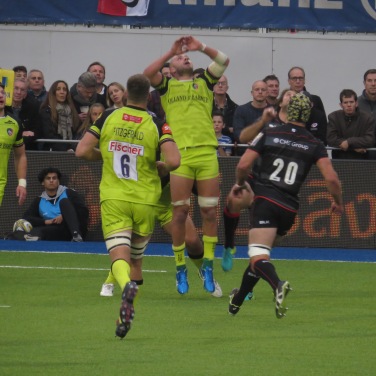 Tigers needed something to change, 2 key substitutions in Sam Harrison fro Ben Youngs and Freddie Burns for Jack Roberts.  I’m a Burns fan and he certainly made a big difference to his team.  He chipped the ball over the head of Mako Vunipola who stupidly put his shoulder into Burns, Wayne Barnes didn’t take a moment to consider brandishing a yellow card, and rightly so! 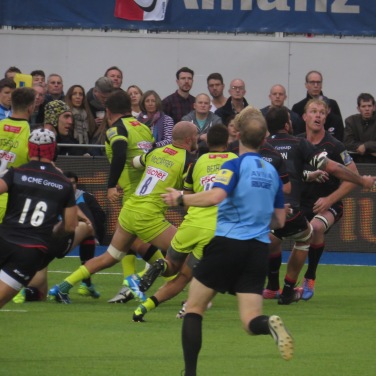 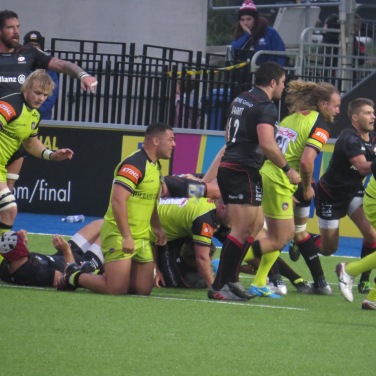 That put Saracens under a lot of pressure, it’s always best to have 15 men on the pitch, Tigers scored through  a George Catchpole try that was worthy of a place in try of the week, 3 minutes after Mako had been sent to the naughty step, then Tigers went on the hunt for a losing bonus point score.  Saracens were hoping for the 4th try but there were to be no more points the score finished on Saracens 24 Tigers 10. 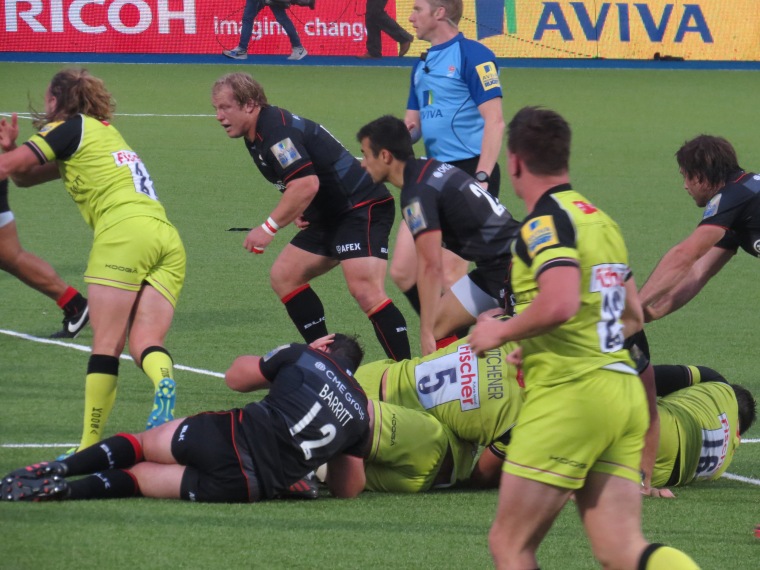 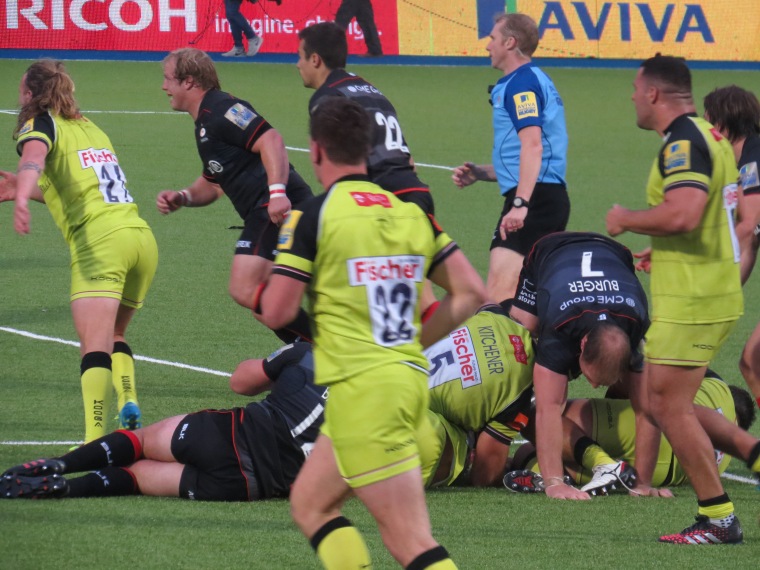 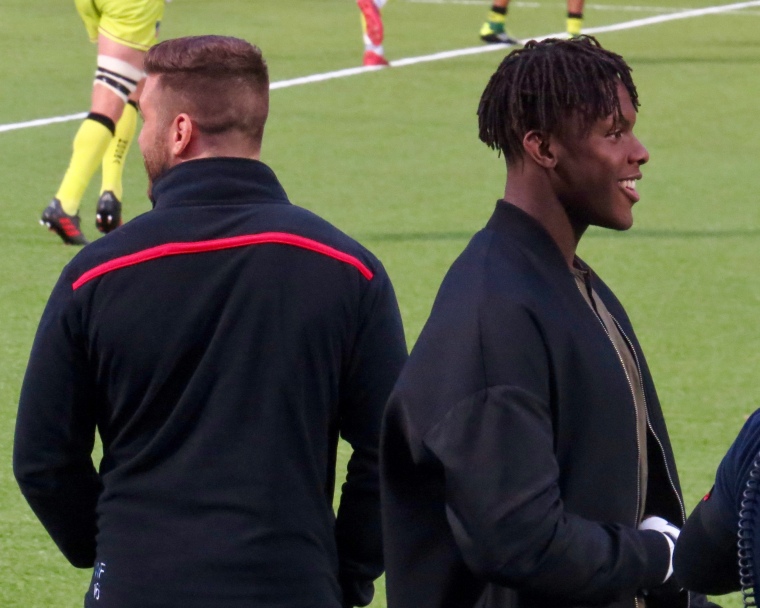