Just what is the 4 Nations?  It’s basically 3 Nations – Australia, New Zealand and England plus one. depending on which hemisphere the tournament is taking place in.  Scotland made […]

Just what is the 4 Nations?  It’s basically 3 Nations – Australia, New Zealand and England plus one. depending on which hemisphere the tournament is taking place in.  Scotland made the tournament this year after winning the European Cup in 2014.  The competition took the place of the Tri-Nations from 2009 and as the table below shows it’s taken place at erratic intervals.

I bought a ticket to every game for £192 which was great value!  The birth of my first Grandson and a visit by his Auntie Alexandra from Paris meant I missed the first 2 matches, a big victory for Australia against Scotland and a narrow win or the Kiwis against England.  But, I was able to make the double header at The Ricoh Arena in Coventry. 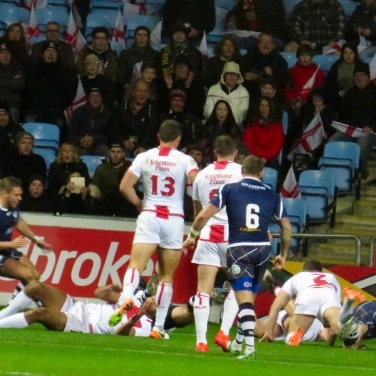 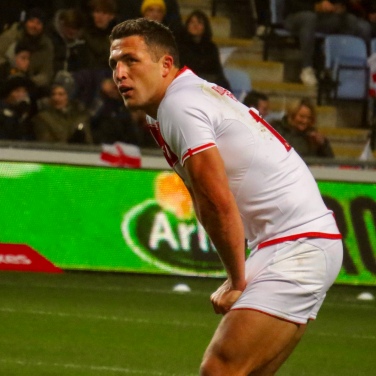 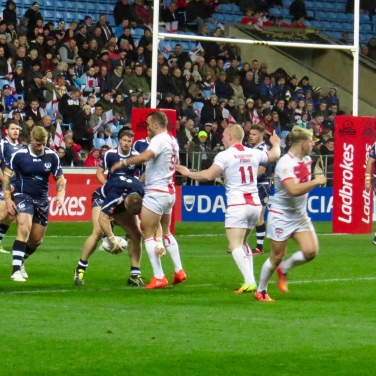 That saw England playing Scotland and Australia facing New Zealand.  The England team is made up of players plying their trade in England in The Superleague and in Australia in the NRL.  Scotland are led by Danny Brough – one of the very best players in Superleague along with some from the top leagues, but they also feature a fair few from outside of those leagues. 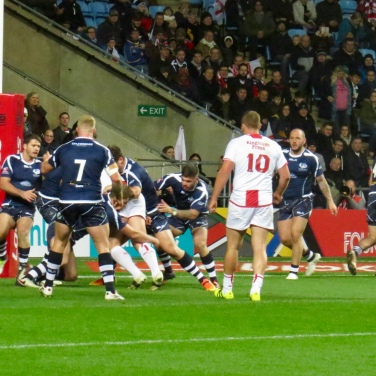 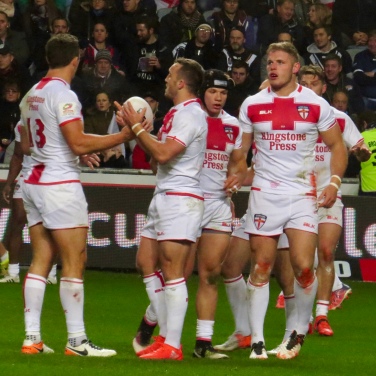 Scotland were therefore very much the underdogs in the competition overall, my impression of this match against England is that the English underestimated the Scots.  A 13 which included 7 players from the 2nd tier teams scored the first 2 tries, with Kane Linnett touching down after 6 minutes followed by a wonder try scored by a flying Matty Russell.  Brough uncharacteristically missed both conversions but Scotland led 8 nil. 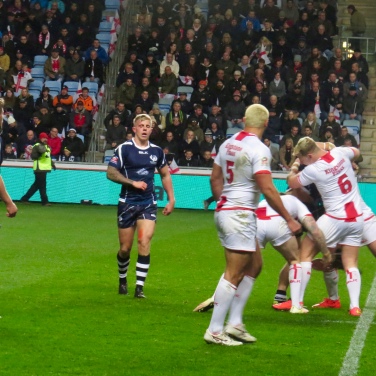 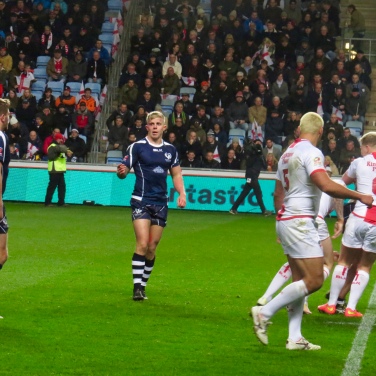 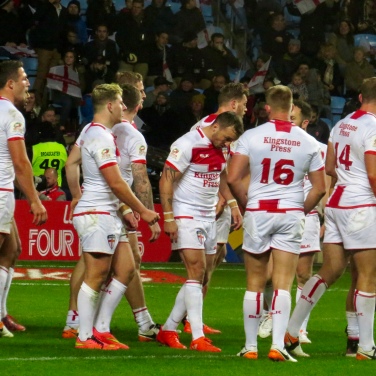 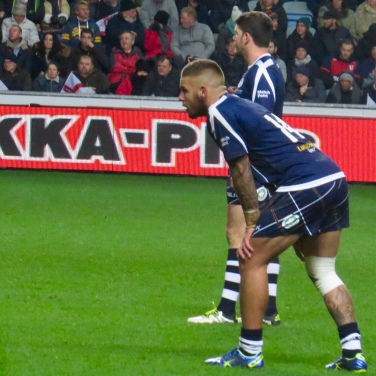 England were strolling around the pitch, they looked tired, or lazy depending on your outlook and Scotland held their lead until the 37th minute as England came awake, Elliot Whitehead scoring 2 tries, duly converted by Luke Gale. 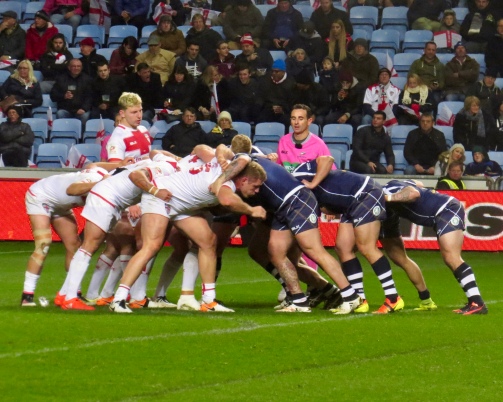 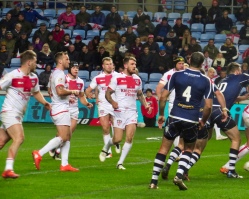 Danny Brough found himself being sent to the naughty step for 10 minutes and England took advantage of the one man advantage.  Tries from Mark Percival, Ryan Hall, Jermaine McGillvary, Luke Gale and Liam Farrell extended the lead. Dale Ferguson scored for Scotland which dented England’s points difference as the score finished England 38 Scotland 12.  The points went the way of England but there were many positives for Scotland to take from the match. 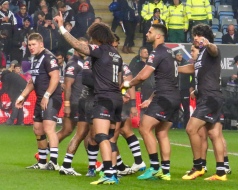 The second match between old rivals Australia and New Zealand was somewhat spoilt by a drunk, foul mouthed Kiwi sitting behind me at the Ricoh.  An unusual occurrence at a rugby match of either code, he swore directly at a lady who asked him to desist.  He should have been ejected really. 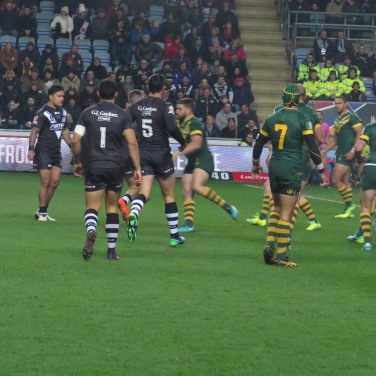 Although the score line was Australia 18 New Zealand 8 – I felt that Australia had this game in the bag from kick off.  Shaun Johnson showed signs of brilliance setting up a try for Jordan Rapana after a wonderful kick over the top of the Australian defenders duly regathered he threw a great pass to Shaun Kenny-Dowall who passed to Rapana. 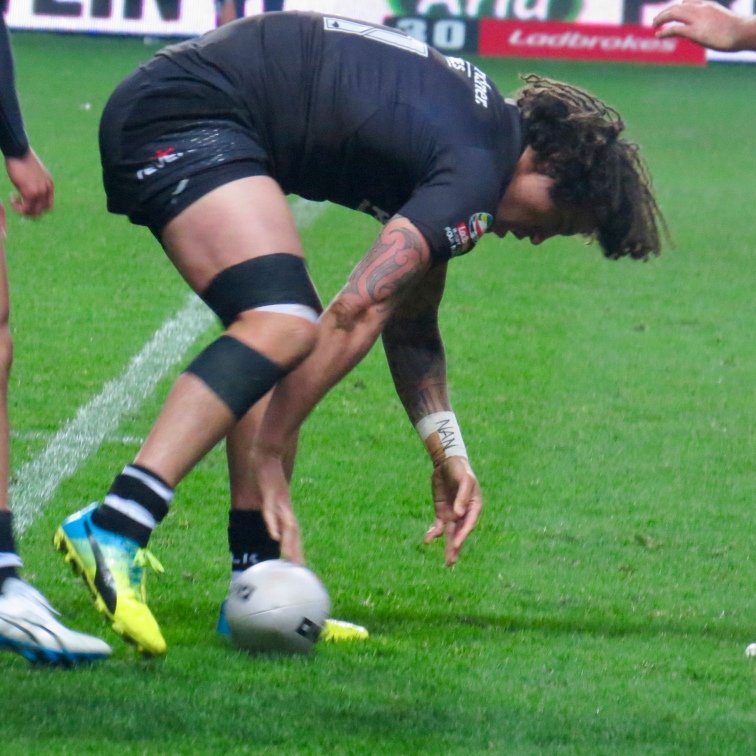 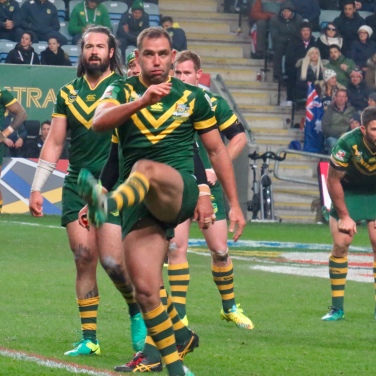 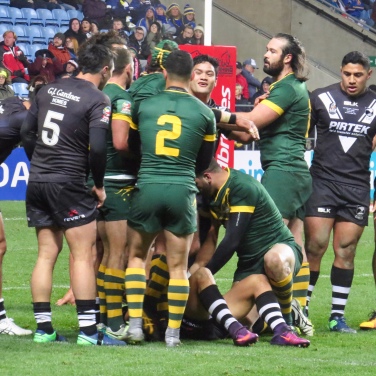 There really was only one likely winner in my opinion, Australia are streets ahead when it comes to international rugby.

A trip to Workington was up next and the match between the Kiwis and the Bravehearts.  The Kiwis were displeased about the choice of venue and made that plain in the lead up.  Scotland had used Workington as a base during the World Cup in 2013, playing a couple of games at the ground.  The fact that it was good enough for that tournament meant it was good enough for this one, but it appeared that the Kiwis were rattled by the conditions. 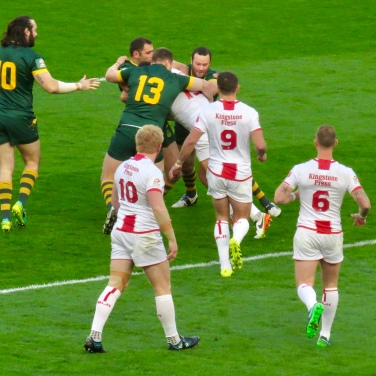 This was my 3rd game and I can say it was the best of the lot, adding in the game between Australia and England at the London Stadium too.  The crowd of over 6,600 was largely supporting the men in blue and they certainly put on a show for them on a cold and rainy Friday evening. 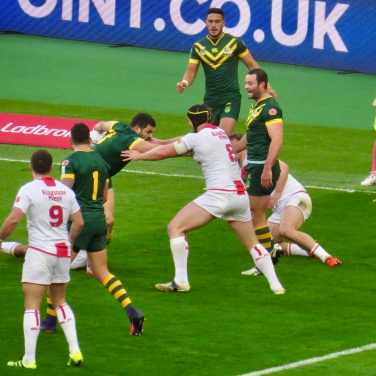 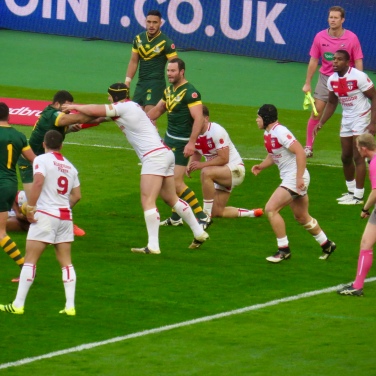 In the game of cricket people talk about a winning draw, and that is just what Scotland achieved here.  They kept pace with the Kiwis with the score at half time reflecting a close match with a try apiece it was New Zealand 6 Scotland 4. 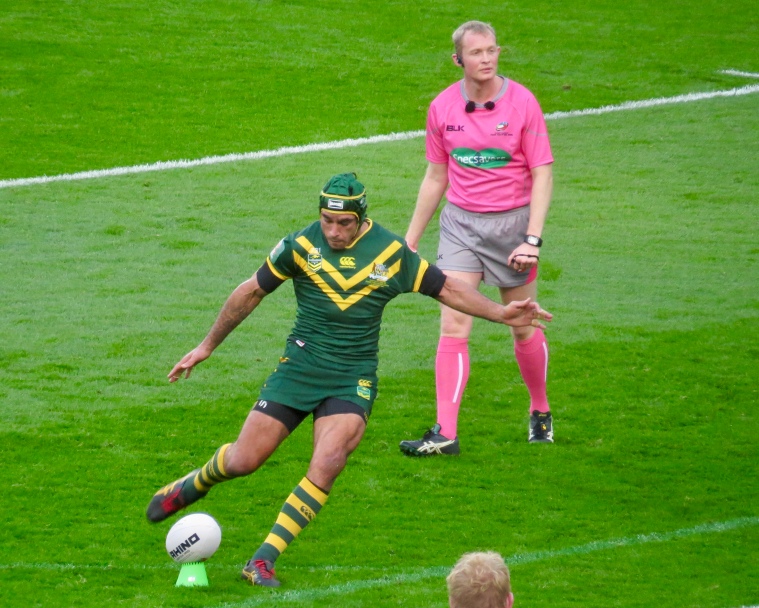 David Fusitu’a scored his second try in the second half but a great try by London Bronco’s Ben Hellewell duly converted by Danny Brough and a penalty slotted between the posts saw Scotland take the lead.  Could they get an historic win?  Two quick fire tries from Gerard Beale broke Scottish hearts but Isaac Luke couldn’t add the extras leaving a 6 point lead. 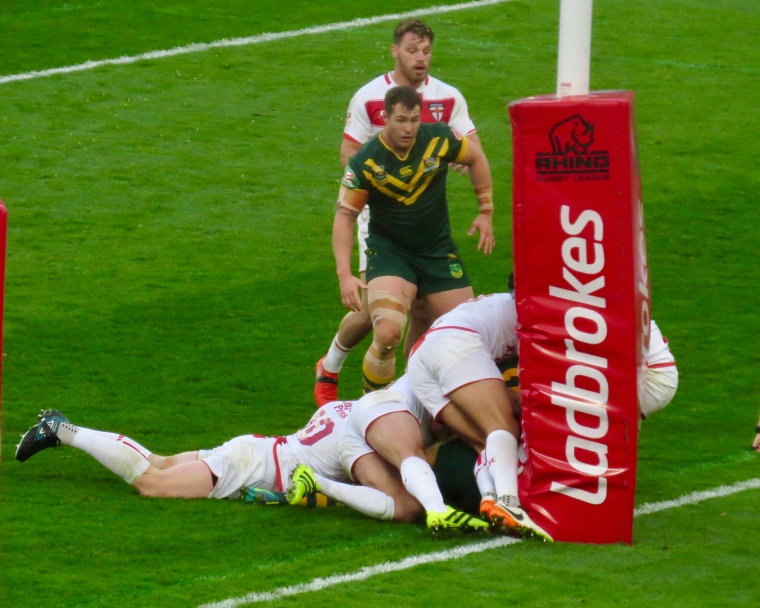 Euan Aitken lifted the crowd as he stormed over the line for Scotland and Brough calmly added the extras with the final whistle moments away.  Scotland became the first of the 4th teams to score a point in the tournament, so, not an historic win, but an historic draw instead.  Both the crowd and team were overjoyed!  The Kiwis would have to rely on Australia to beat England to make the final at Anfield. 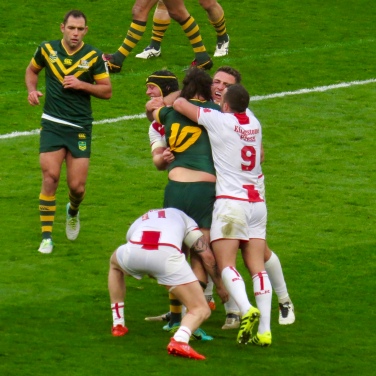 That final group game took place at the London Stadium, most of my photos are from that game as it was the first with anything approaching good light.  Could England cause an upset to find their way to the Final? 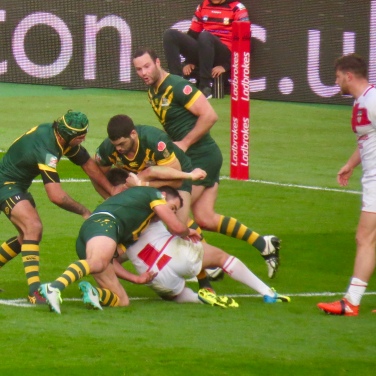 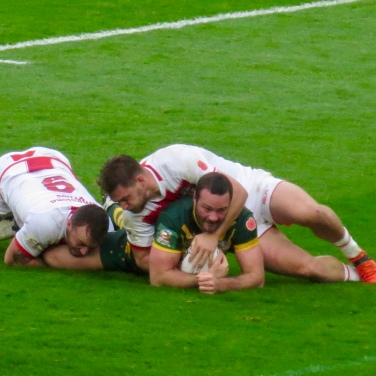 As a West Ham season ticket holder it was good to see a game from a different viewpoint, it was also good to see that the stewards really didn’t seem to now what to do with themselves, a sporting event is so much nicer when the action’s taking place on the pitch and not in the stands.

I’m not going to linger on the game, in spite of a new Australian coach and several NRL players in the England team it was quite literally like watching men against boys.  It was strange to see the home team start without George Williams who’d been Man of The Match at the Ricoh Arena, there was little or no spark from Gareth Widdop and Kevin Brown.  Touch was missed twice on a penalty kick, a major schoolboy error, you can’t beat the best unless you get the basics right!

Australia scored 6 tries to England’s 3 taking the final score to Australia 36 England 18.  In reality England were always unlikely to win this match but they should have beaten the Kiwis.  The worry now in the end up to the World Cup is that coach Wayne Bennett will return to Australia and have little or no interaction with his players before they travel to his homeland for the tournament.