The final Autumn International and final game of 2016 for England saw old foes Australia coming to Twickenham.  England had won all 3 of their matches against South Africa, Fiji […]

The final Autumn International and final game of 2016 for England saw old foes Australia coming to Twickenham.  England had won all 3 of their matches against South Africa, Fiji and Argentina taking them to a run of 13 matches unbeaten, their 4th win of the year against the Wallabies, should it happen would see this England team equal the record 14 wins of the team that won the World Cup in 2003. 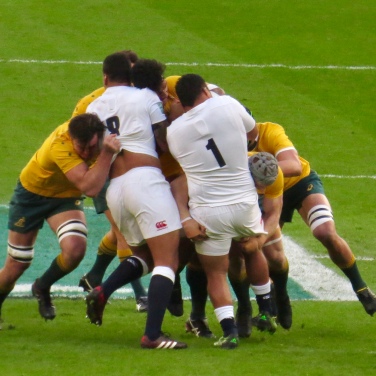 I along with many others felt that this would be the biggest test of 2016 for an England team renewed under their Australian coach Eddie Jones.  He and Michael Cheika had been playing some media mind games in the run up to the game, with both debating the legality of the scrummaging techniques of the opposition team.  It kept a lot of attention away from the players of both teams, which is standard practice for Jones.

England were without Billy Vunipola after he’d left the pitch in agony during the Argentina game, Elliot Daly had received a 2 week ban for his clumsy tackle during the same game.  In came Nathan Hughes for his first start at 8 and Marland Yarde in place of Daly. 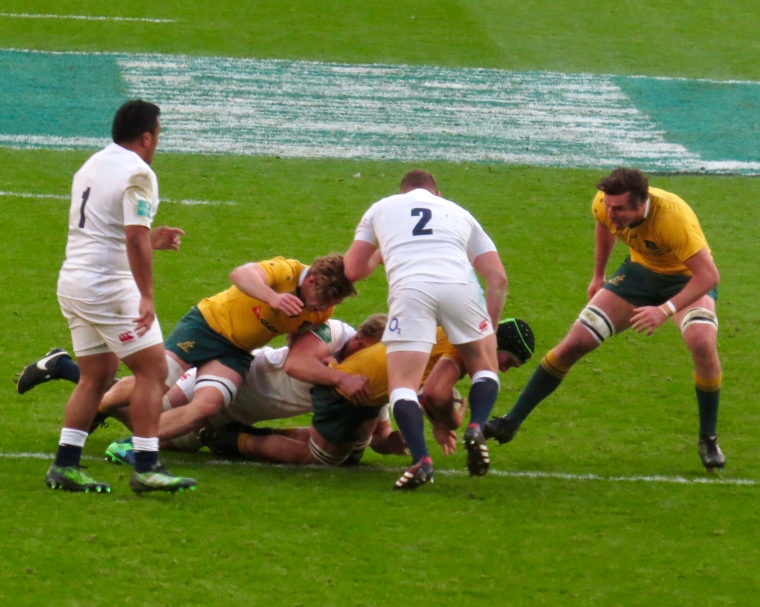 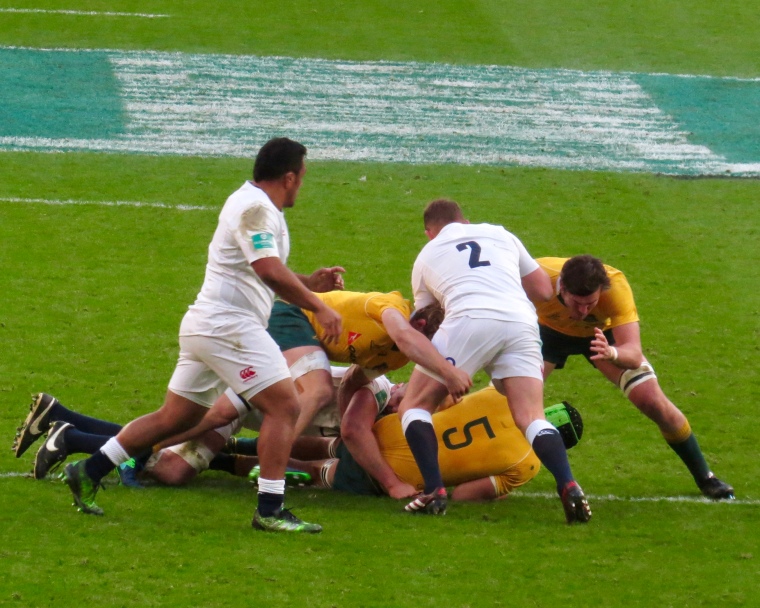 Australia were missing Will Genia, his French team Stade Francais refused to release him for this game, a world class scrum half he would be a loss for his team, although Nick Phipps is no slouch. 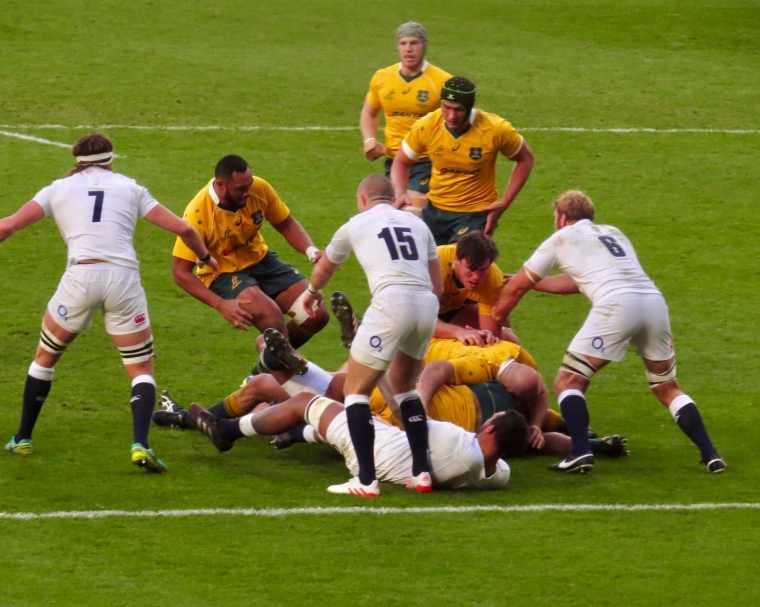 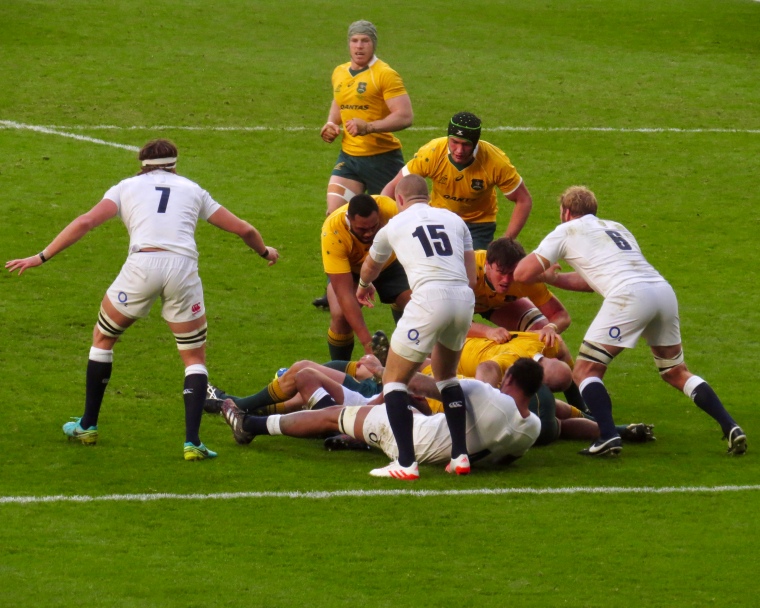 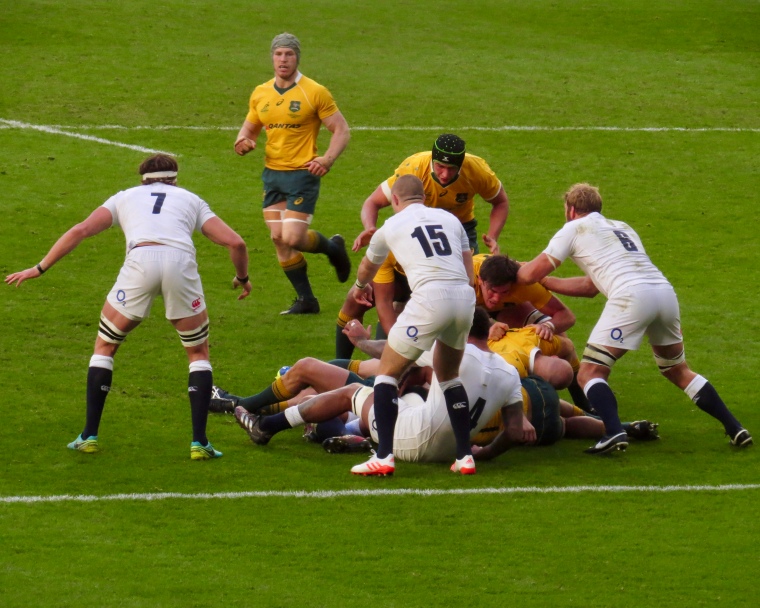 I’d got hold of a ticket at the last minute, it certainly helps only needing one, I got a call from Ollie at Saracens when I was at the Wheelchair Tennis, did I want a ticket?  Absolutely I did! 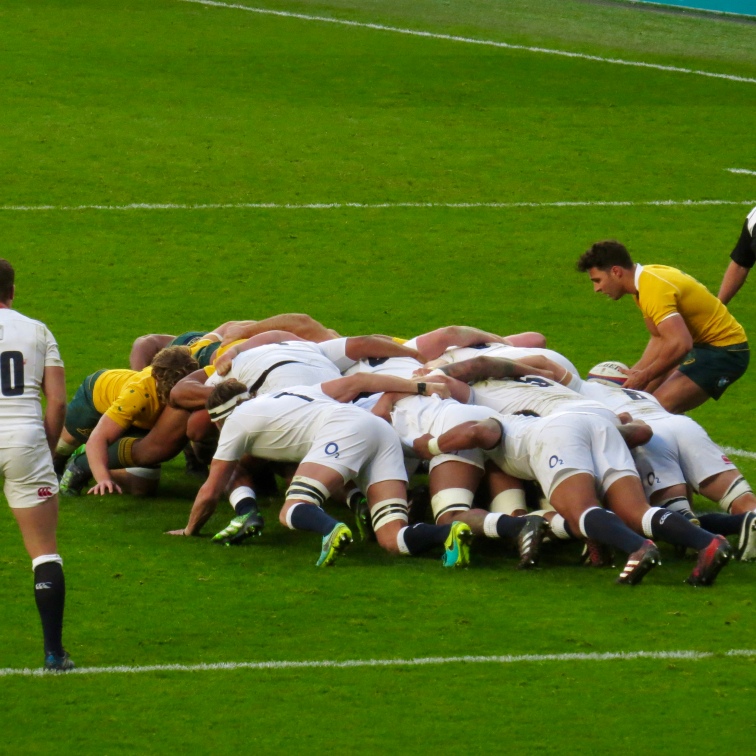 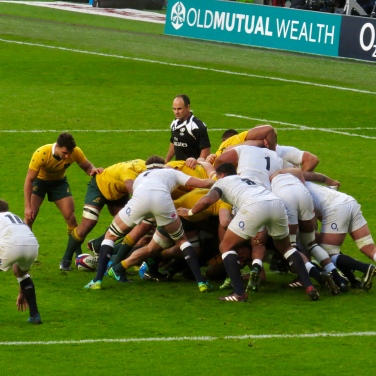 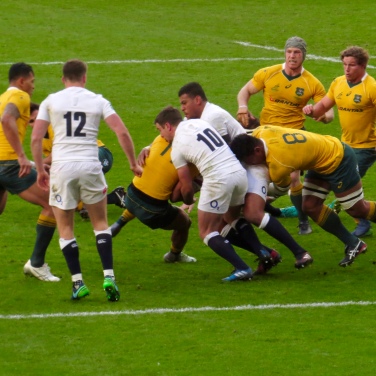 As No 46 in the O2 Rose Army I was able to get access to the Blue Room along with my fellow Rose Army members, It was lovely to see them and to see Vernon Kay in action.  I’m a sucker for a Bolton accent and he’s very good at his job, highly entertaining all round!  I made my way to my seat with an hour to go, to find 2 fellow Saracens fans sitting next to me, it was good to be with like minded people, we commiserated with each other when the news of Bath’s win over Saracens came through. 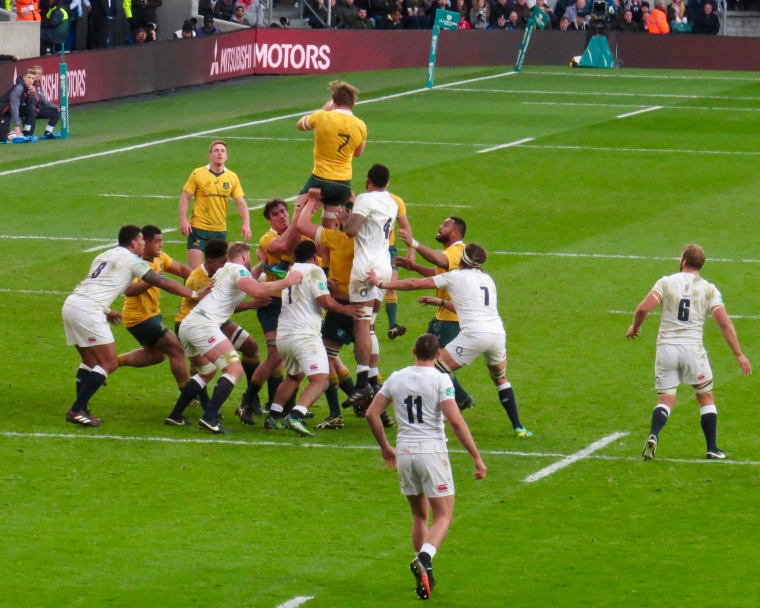 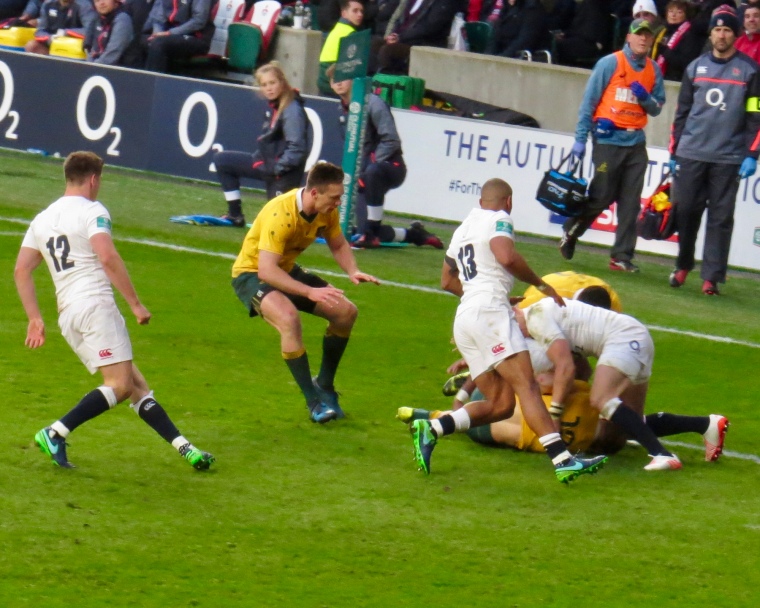 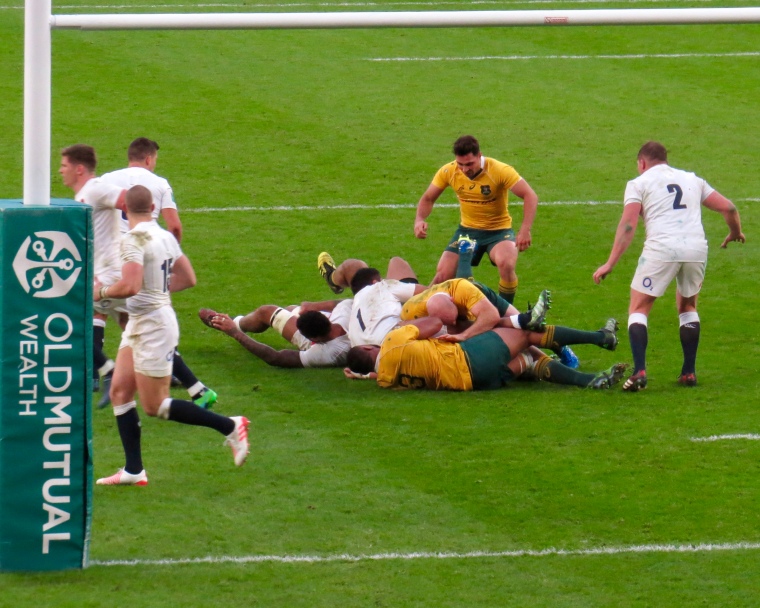 The game started at 100 MPH, which in this instance means Australia started at 100 MPH with England lagging behind to say the least! Bernard Foley had an early chance to put his team ahead with a simple penalty kick, well, at least from where I was sitting it looked it.  Apparently not, the kick went awry and the points were missed.  It had been said before the game that Owen Farrell’s boot could be the deciding factor, this suggested that may well be so. 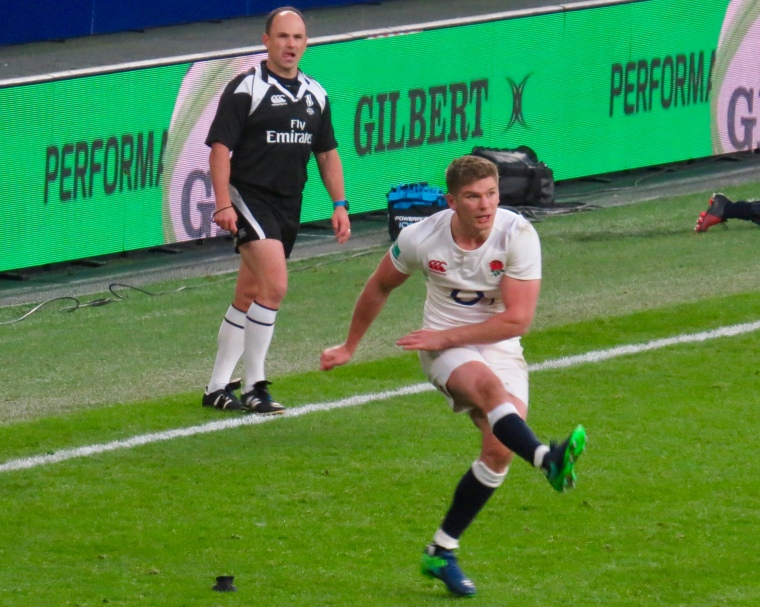 If there were stats available for the first 20 minutes they wouldn’t make good reading for Eddie Jones and England, to say Australia dominated would be an understatement, England seemed to be all at sea.  A complete mix up saw the ball mishandled by Owen Farrell just short of the England line, the ball sprung out towards Mike Brown who also messed up, failing to clear or ground the ball.  It looked like Tevita Kuridrani had touched down for the first try of the game, but the TMO referral showed That David Pocock had knocked on as he challenged the muddled Farrell, a short lived sigh of relief for England fans. 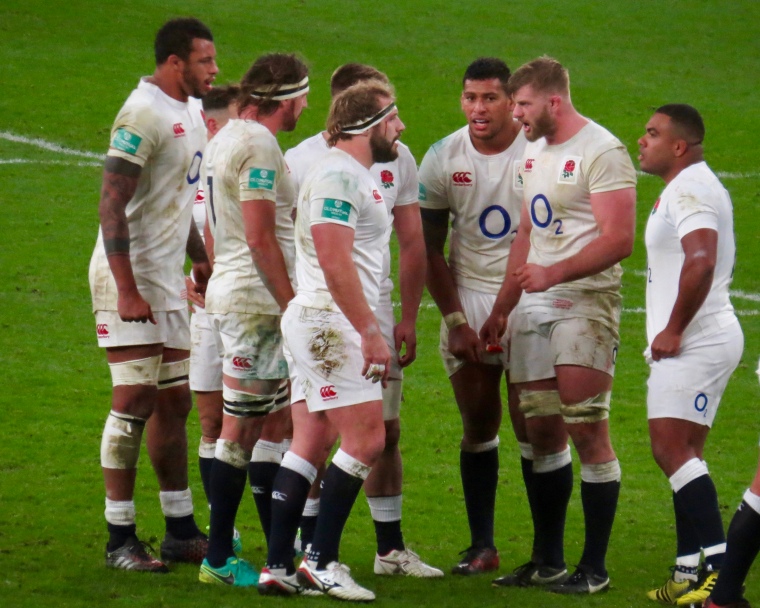 That relief wasn’t to last long, Australia won a 5m scrum on the England line against the head, the ball spun out to Sefa Naivalu who strolled in for an easy try, Foley made no mistake with the conversion. 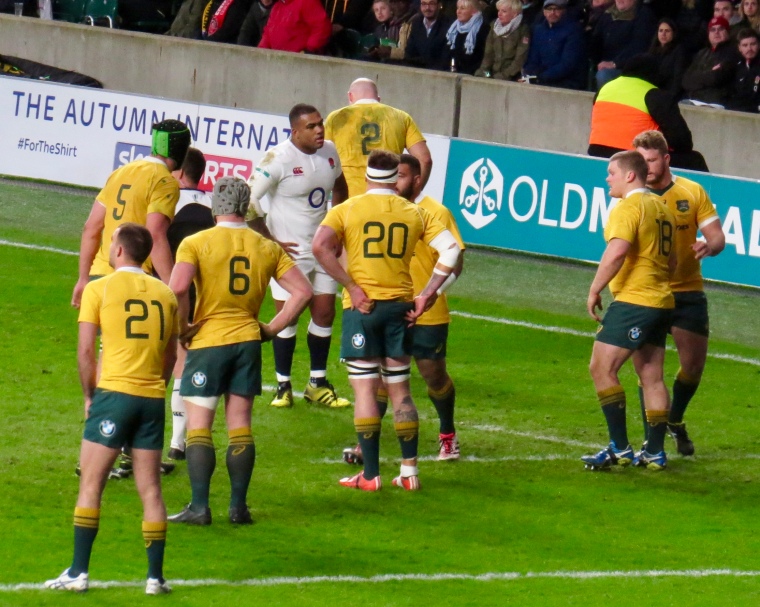 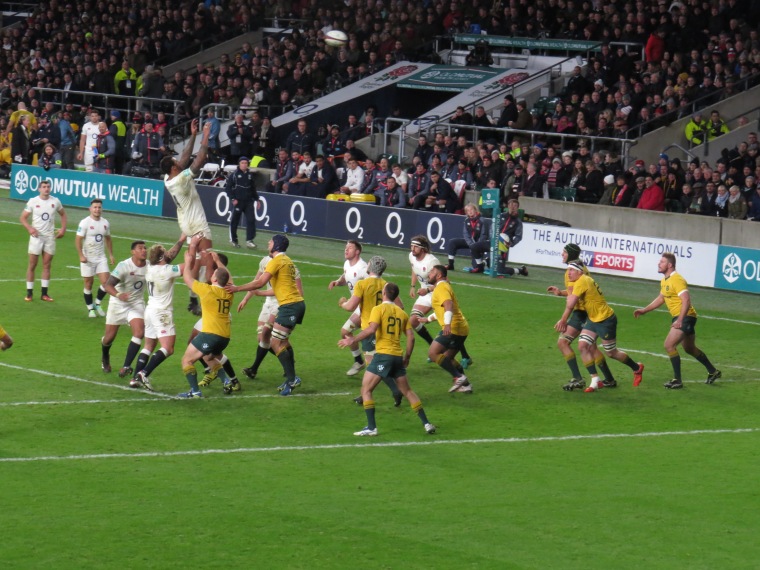 5 minutes later Australia, having laid siege to the England line seemed to have touched down twice in 2 minutes, neither try was given based on the verdict of the TMO, but Australia had won a penalty and Foley stretched the lead to 10 points.  This wasn’t going to plan at all for the home team! 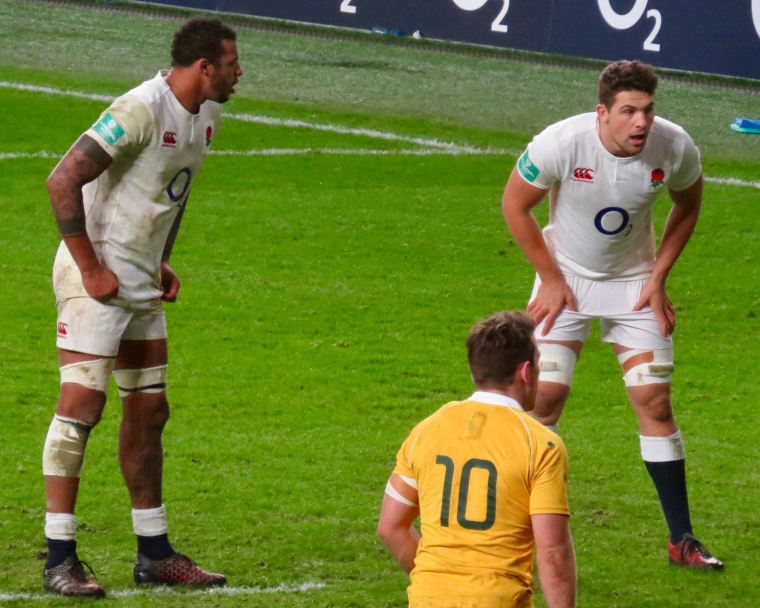 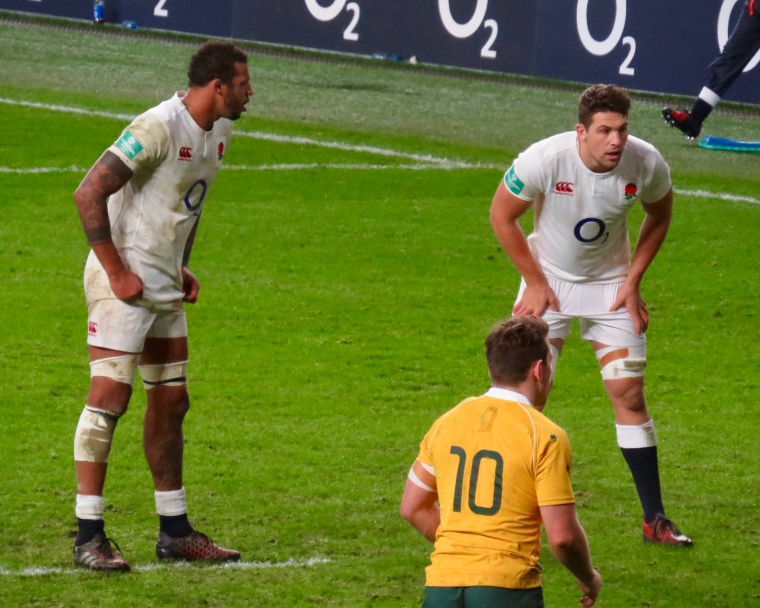 England eventually made their way into the Australian half after around 18 minutes, and won a penalty duly converted by Farrell.  A second penalty closed the gap to 4, when Australia could well have been out of sight.

There is a school of thought that says a winning team will find luck on the pitch, it was certainly the case for the All Blacks at the Side de France the previous week with a Barrett interception try.  For England a loose pass by Nick Phipps was kicked ahead by Owen Farrell, it literally bounced up into Jonathan Jospeh’s hands, he ran in to score under the posts, giving Farrell an easy conversion and a lead for England. 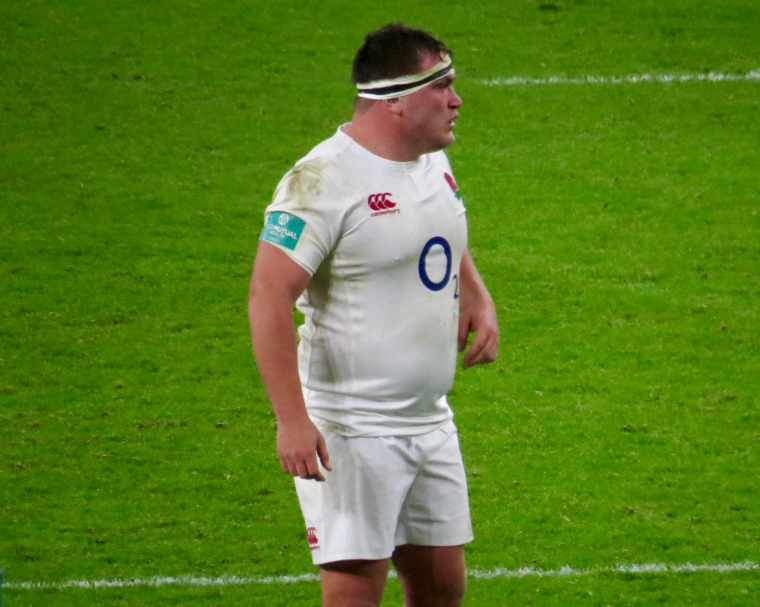 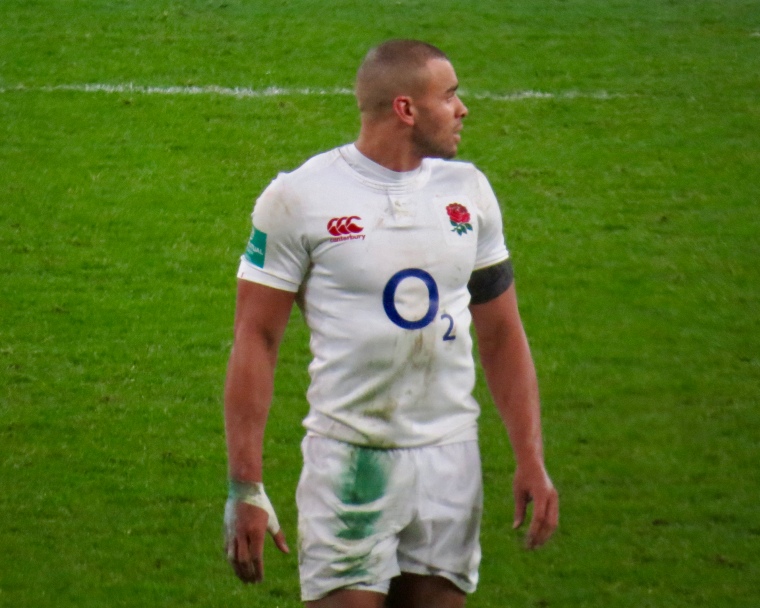 However poor discipline cost England that lead as Foley converted 2 penalties before half time to see the teams go in at half time with the score on England 13 Australia 16.  Could that record be slipping away?  It would take a huge effort by England to win this one.

I use the term – A Game of 2 Halves – regularly and wow this certainly was one of those!  The MPH was swapped around for the second half, with England going to the max and Australia having a torrid, error strewn half.

Having seen the Australia tries at the end I was sitting the majority of the action in the 2nd half was also at towards the North Stand, absolute result!  What wasn’t a result were the foul mouthed posh twits sat behind.  As per usual there was a lot of coming and going, always a total annoyance, Mr Posh decided to shout out ‘sit down – it’s not F***ing Football’ right in my ear pretty much.  I’m not very good at ignoring provocation so turned around in response to tell him I didn’t want to be getting up but had no choice and that ‘No, it’s not F***ing Football, because Football fans watch the game!  They don’t leave their seats every 2 minutes!’  The wandering about is one of the things that makes watching rugby at Twickenham less than pleasurable.  I agree with an article written by Sir Clive Woodward, basically if you want to drink yourself silly, why not do it in a pub?  And stop ruining other people’s viewing!

That viewing was so much better as an England fan in the second half as the team we’ve become used to appeared.  They threw the ball around and played with total intensity, 4 minutes into the half Ben Youngs moved the ball from the base of a scrum, and the forwards set up a maul, England were awarded a penalty but played on, Joseph went from try scorer to provider as he put in a grubber kick which landed behind Israel Folau and was pounced on by Yarde.  There was a suspicion of a knock on, but the try was awarded after being checked by the TMO.  Farrell added the extras. 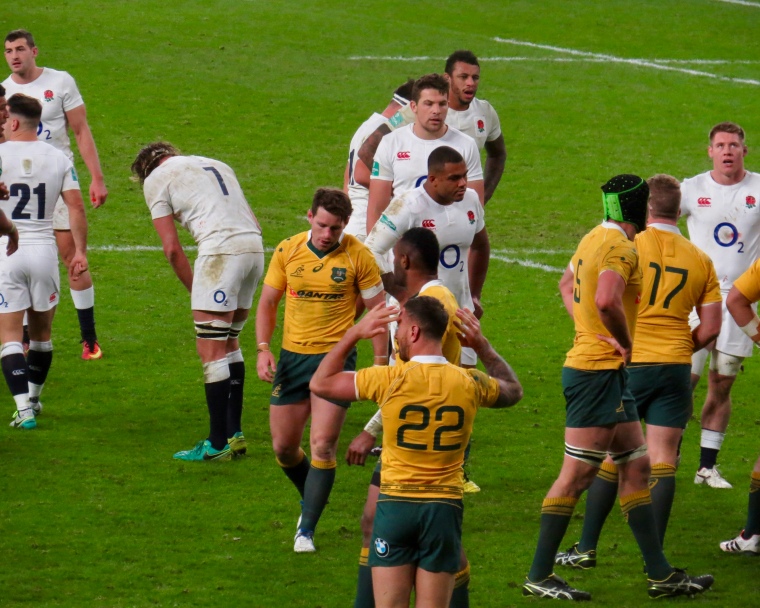 A piece of individual brilliance by Ben Young saw him score the next try for England, he took a quick tap penalty after Australia were penalised in the scrum, storming in to score, cue jumping out of seats in delight ad being covered in Guinness by Mr Posh, I did feel for the Australia fan sat next to me as he also got soaked to add insult to injury.  The conversion saw England pull clear by 11 points.  That was extended to 14 when Farrell added 3 for a penalty as Kane Douglas tackled a man without the ball.

Danny Care came on for Ben Youngs who’d had a great game, he strangely attempted a drop goal within moments of being on the pitch, it went well wide, but didn’t warrant him being called a F***ing W***er by Junior Mr Posh behind at the top of his voice! England had a 14 point lead, the kick wasn’t a win or lose thing.

We were 25 minutes into the half and Australia had been kept pointless, however prop Sekope Kepu, showed a turn of speed which belied his position to evade several England tacklers to score a try worthy of any back, Foley missed the conversion leaving his team with a gap of 9 points to close.

With Farrell off the pitch, George Ford missed a penalty, but England remained on the attack.  Mike Brown was taken out late by the shoulder of Dane Haylett-Petty, who received a yellow card for his troubles.  That Luck mentioned earlier held for England when Joseph intercepted a loose pass by Pocock, sprinting 40 metres to score his second try and give England an unassailable lead.  The final score was England 37 Australia 21 – an emphatic victory against the old foe, to bring England their 14th win, the 13th under the leadership of Eddie Jones.  A truly amazing feat after the ignominy of their performance in their home World Cup in 2015.