I never imagined this retirement malarkey would see me so busy!  I’m way behind on my writing, with Round 3 of the 6 Nations due this weekend I have to […]

I never imagined this retirement malarkey would see me so busy!  I’m way behind on my writing, with Round 3 of the 6 Nations due this weekend I have to come back to the game between Wales and England.  With a week and a half having passed I won’t write a match report more a general piece about the day. 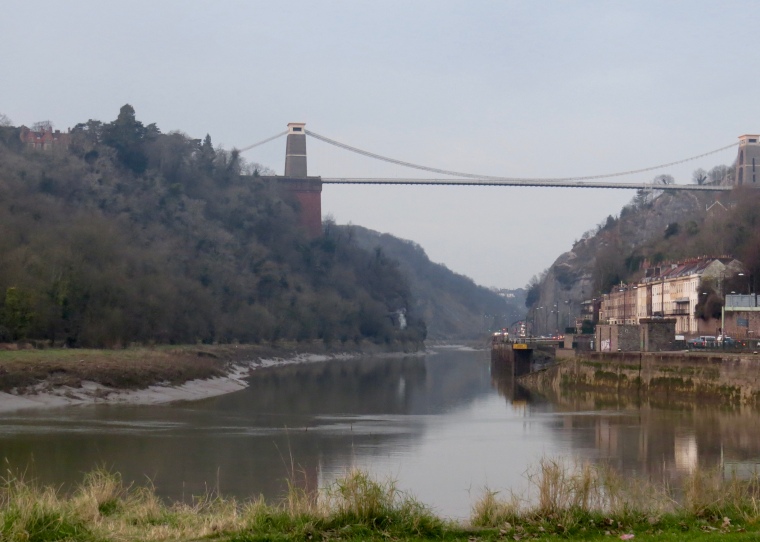 I was able to combine my journey with a Friday night match, taking in Bristol v Harlequins.  I met up with Andrew, a fellow Rose Army member, he’d managed to get me a ticket for the match.  We caught a public bus which meant a picturesque walk, along with Ashton Gate being the best ground in the Premiership (in my opinion) I’d say it also has the best walk, with a stunning view of the Clifton Suspension Bridge! 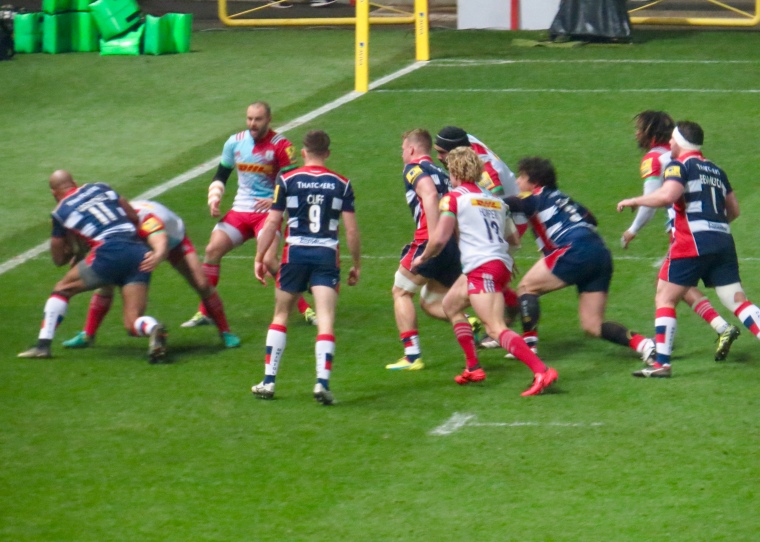 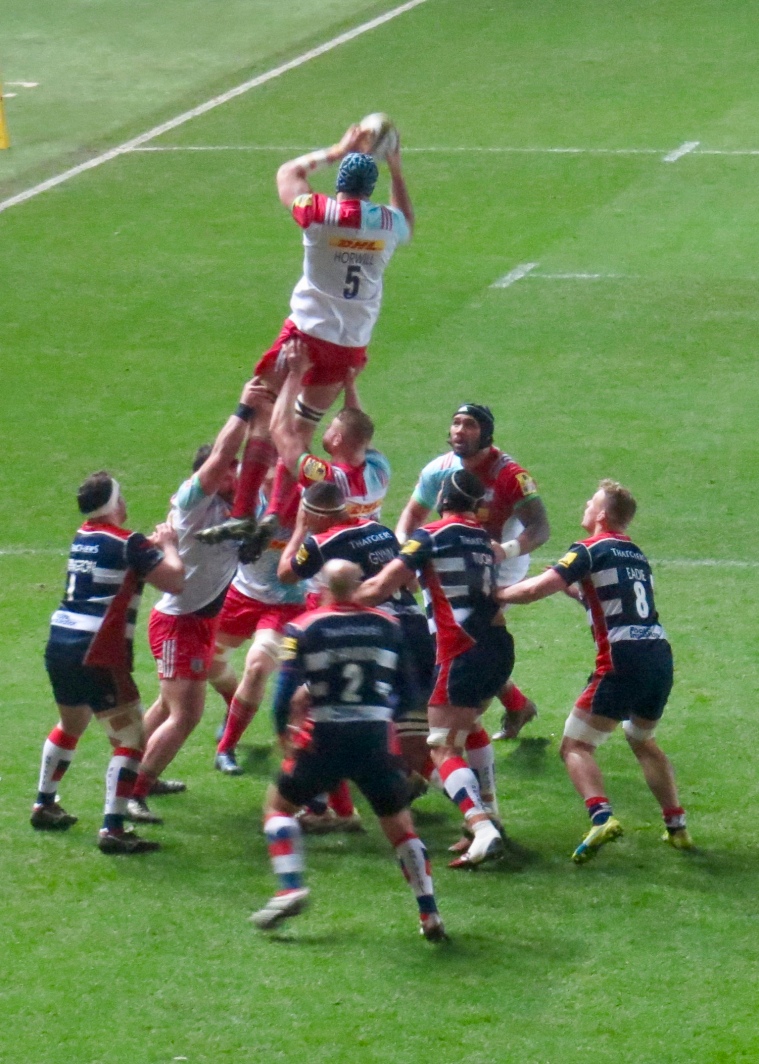 We went to the pub where we were joined by several of Andrew’s fellow Bristol fans, we had a really pleasant hour or so with lots of laughter before making our way to the ground. I felt very torn on this one, I have a soft spot for Quins but would like to see Bristol stay in the top flight.  However this was a one sided match, Bristol just couldn’t get the basics right and Quins made them pay.  There was one bright moment for the home fans when Tom Varndell surpassed Mark Cueto’s try scoring record with his 91st Premiership try, he injured himself in the process and left the field shortly after, but he has that record! 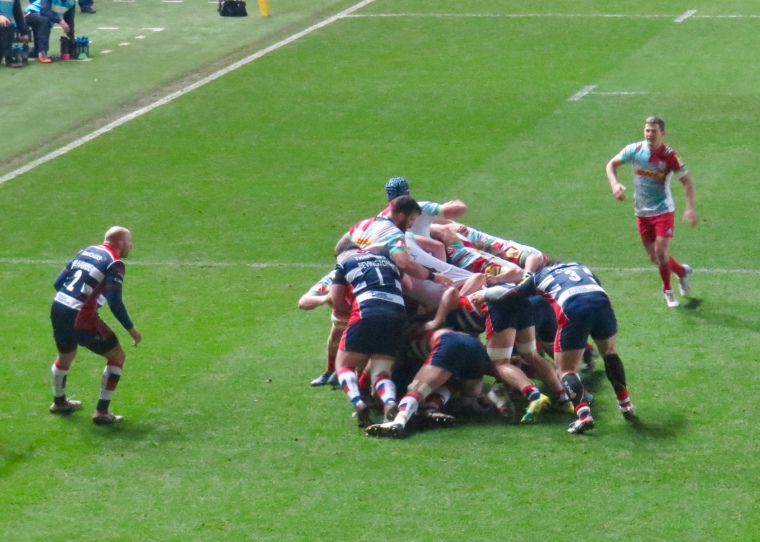 Harlequins scored 5 tries to Bristol’s 1 and the score finished on Bristol 8 Harlequins 42.  Andrew and I were joined by Lee, a Twitter friend and in spite of the result the laughter continued.  All in all as a neutral I had a really great evening! 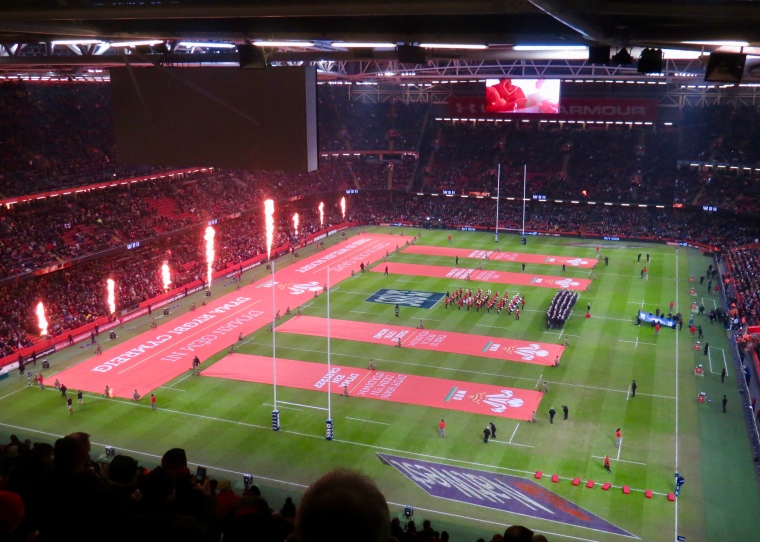 Finding my hotel wasn’t so much fun, the postcode wasn’t recognised, luckily I happened upon it just as I was panicking! A decent nights sleep and I set of for Cardiff, it always takes a while to get into the place on match day so I gave myself plenty of time, I’d booked an NCP car park to save the hassle of the park and ride.  That worked well on the way there but I managed to get lost again in trying to find my way back to my car – there was a theme for this weekend! 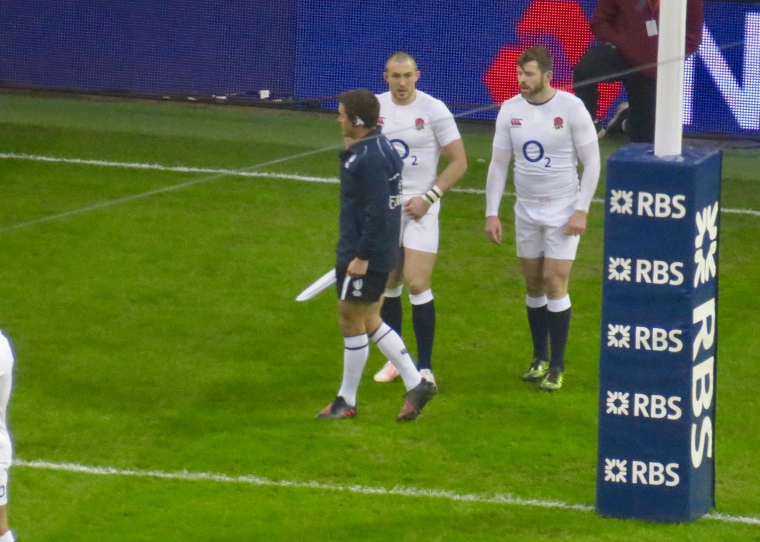 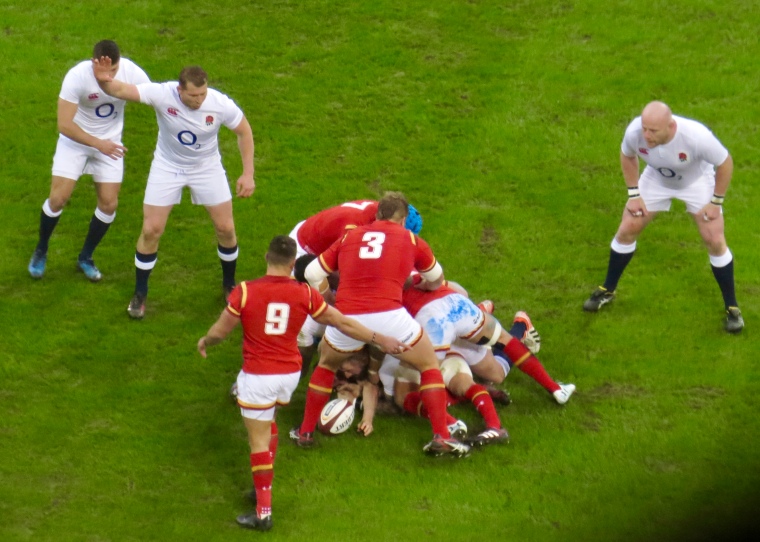 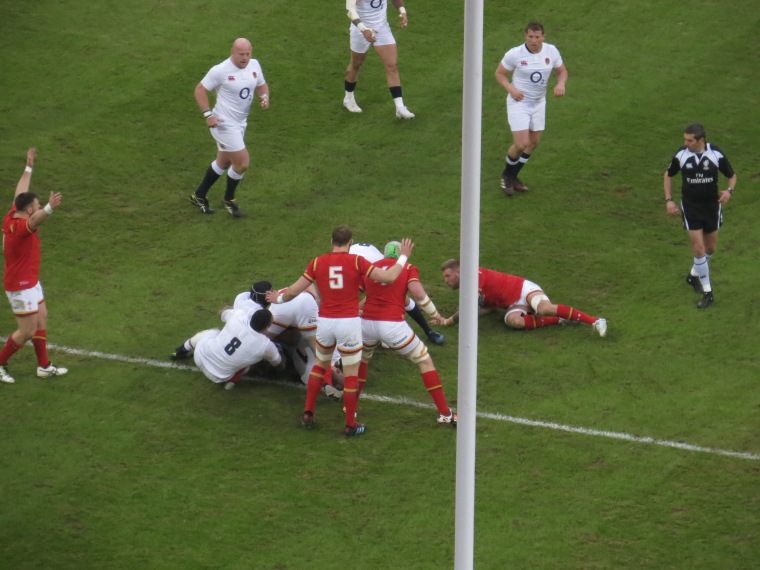 I had fish and chips before making my way to the ground, I met up with Anthony and Matthew, 2 more Rose Army friends, we get everywhere! I’ve seen a fair few games in Cardiff, but never England in the Six Nations, I was excited to say the least!

My seat was in the Upper tier so a fair climb, but there is no bad seat in the Principality Stadium.  Having played a few mind games in the build up to the game Eddie Jones and England decided they wanted the roof open.  That definitely dulls the atmosphere, but not a lot, the male voice choir was as always amazing, it really is one of the best things in rugby, well, in any sport really, especially when they sing the Welsh Anthem, it literally makes the hairs stand up on the back of my neck and this day was no different. 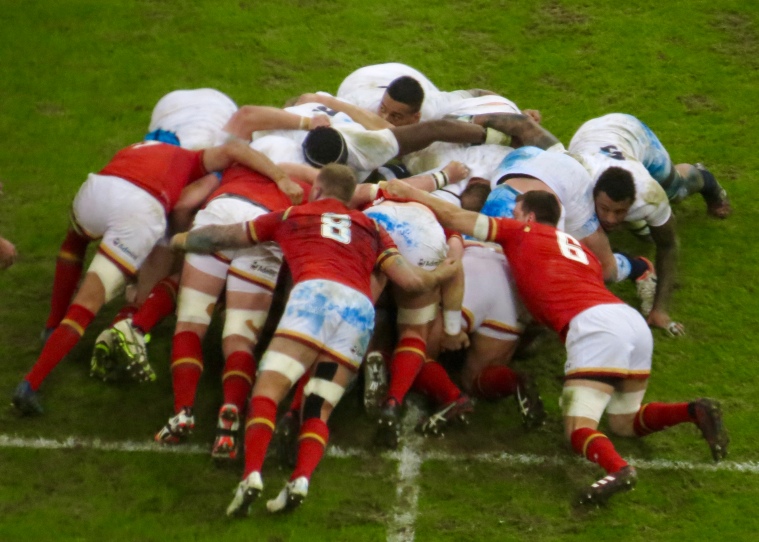 And so to the rugby, England had beaten France but hadn’t been firing on all cylinders, Wales had a win against Italy behind them, but they weren’t overly convincing.  This match for Wales in particular is the big one, beating England is the one that matters the most for many of their fans. 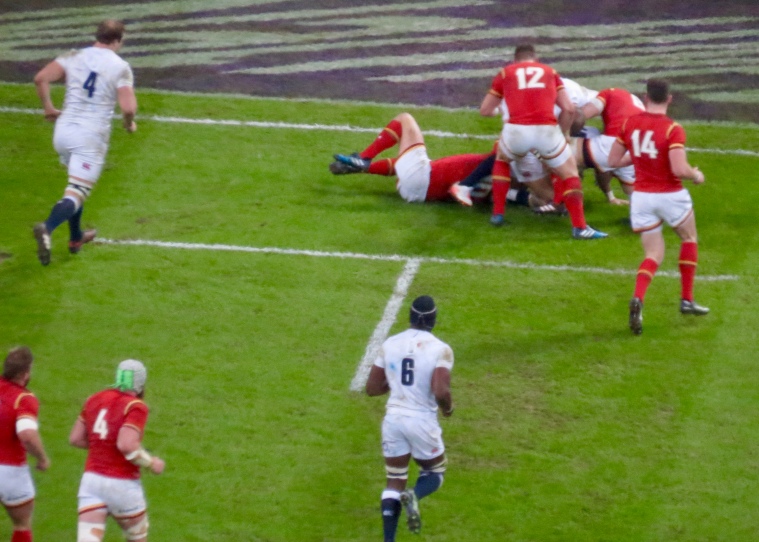 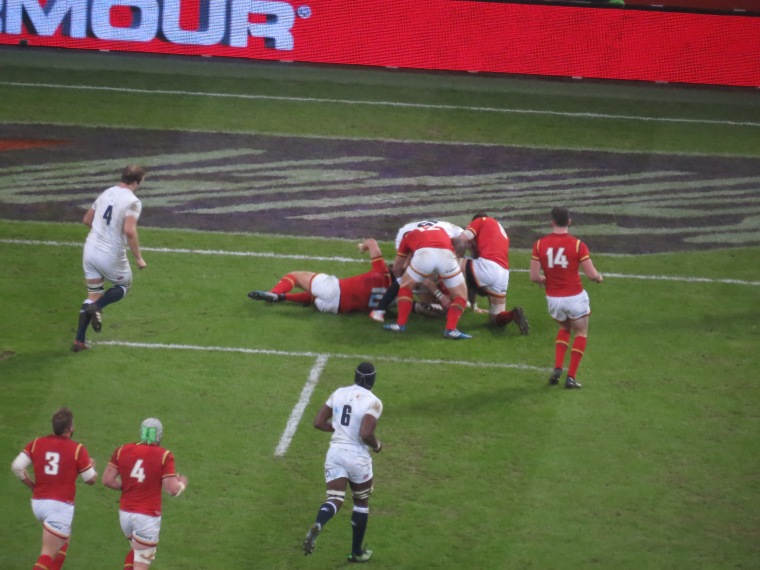 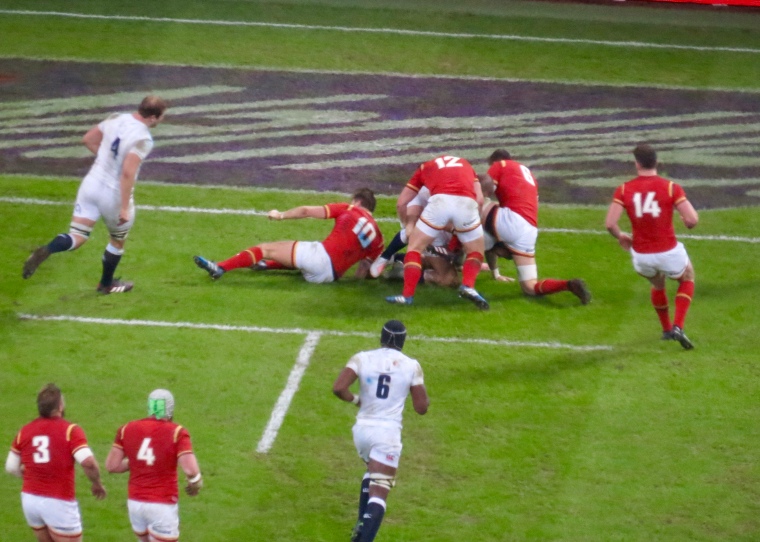 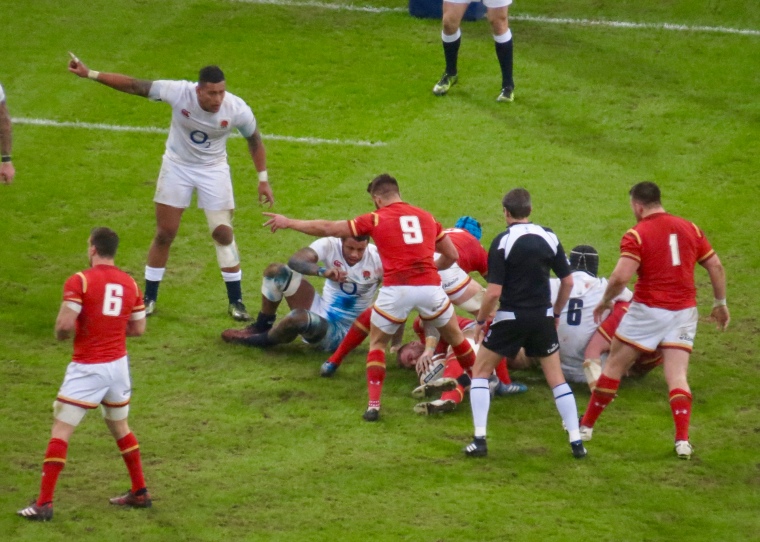 For 70 minutes it looked like this would be a home win, Wales were the better team in  virtually every facet of the game.  That saying of ‘it’s forwards who win the game, the backs decide by how many’ should have seen a Welsh victory, their back row in particular outshone England’s.  England are missing Chris Robshaw and Billy Vunipola in a big way and Sam Warburton, Justin Tipuric and Ross Moriarty made the most of having an inexperienced back down in front of them.  Maro Itoje is very close to world class at 4 but nowhere near that at 6 and as good as Nathan Hughes is at club level he doesn’t fill Billy V’s shoes in an England shirt.

Ben Youngs had scored the first try of the game,  before Liam Williams responded in style, the teams went in at half time with the score on Wales 13 England 8 and it was hard to imagine where points would come for England. 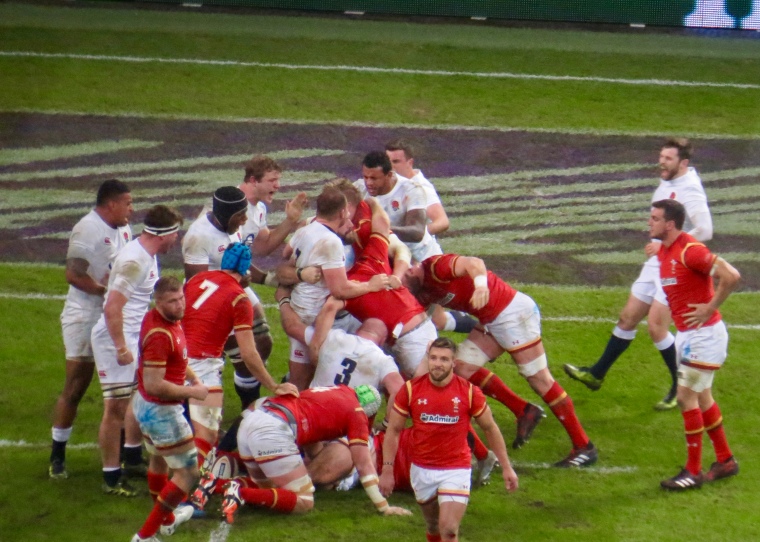 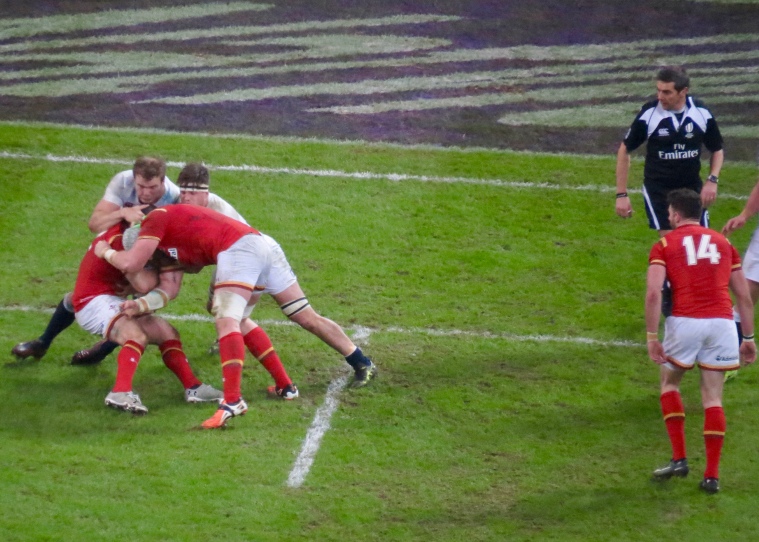 Leigh Halfpenny added a penalty in the second half to stretch the Wales lead, but, in spite of holding that lead, my neighbour pointed out that Wales looked like beaten men, they certainly looked tired as the half progressed.  Perhaps that was why Moriarty was substituted, he’d been one of Wales’ best players but made way for a returning Taulupe Faletau.

England brought their ‘Finishers’ on but it was 3 players who’d started who would seal the win for England who were training by 5 points with 5 minutes remaining.  Jonathan Davies received the ball behind his own line, he had his angle for the kick narrowed down by Kyle Sinckler, but didn’t aim for touch, instead the ball landed with George Ford, he soared up field making a perfect pass to Owen Farrell, who timed his pass perfectly to Elliot Daly who went around the outside of Alex Cuthbert to touch down in the corner.  Owen Farrell added the extras from the side line.

Cue ecstasy for the England fans and despair for the Welsh as the clock ticked away, the final whistle blew and England had won, the score was Wales 16 England 21.  This England team had played badly yet won again they remain on track to equal the All Blacks record of 19 straight wins.

My next trip to Cardiff will be to watch Ireland play on a Friday night, I’m hoping they agree to close the roof and look forward to a really competitive match.