The Six Nations tournament saw both of these teams lose key players,  that period was a mixed time for both Bath and Saracens with the Premiership results panning out as […]

The Six Nations tournament saw both of these teams lose key players,  that period was a mixed time for both Bath and Saracens with the Premiership results panning out as follows.

The 2 losses for Saracens and a great run by Exeter Chiefs saw them leapfrog the Champions into 2nd place. pole position for a home semi-final.  Things are getting tight at the top a win in this fixture was important for both teams.  I was expecting a tight, hard fought game, and after 40 minutes the scoreline suggested that’s what was happening. 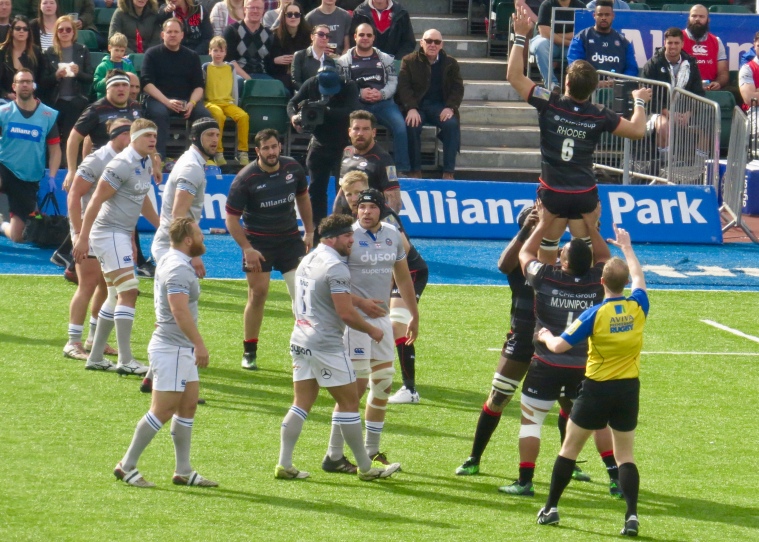 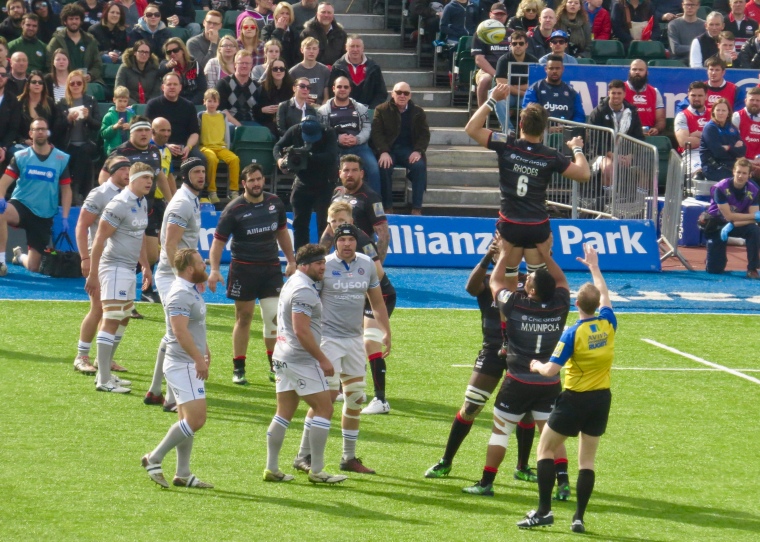 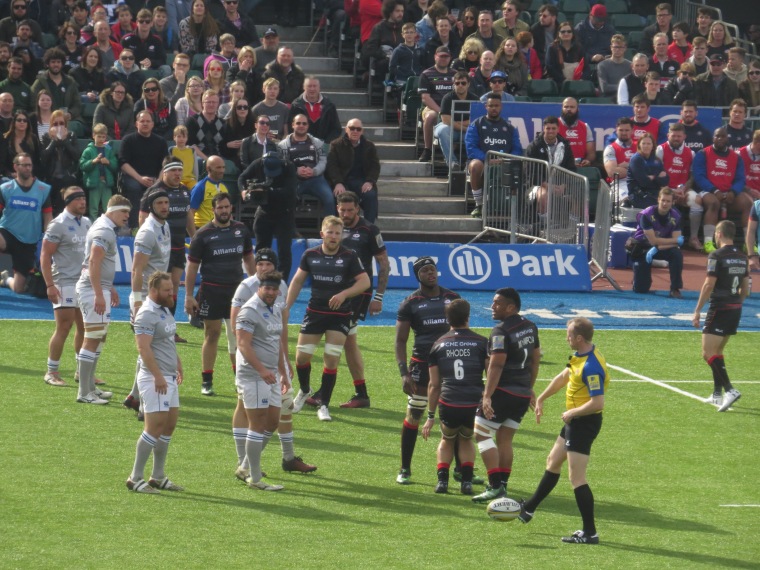 Saracens were awarded a highly kickable penalty after 3 minutes, but with a show of intent Owen Farrell kicked to the corner.  The Wolfpack were nearly back at full force, George Kruis is still in the sick bay, but Jim Hamilton has been immense in his and Maro Itoje’s absence.  With the ball won by Itoje, Jamie George ran round to join the maul which trundled over the line, he was in possession for the first try of the day.  Farrell added the extras.  It’d been announced that Allianz, one of Saracens sponsors would donate £1000 to the Sports Foundation for every try scored, that was the first thousand in the bank. 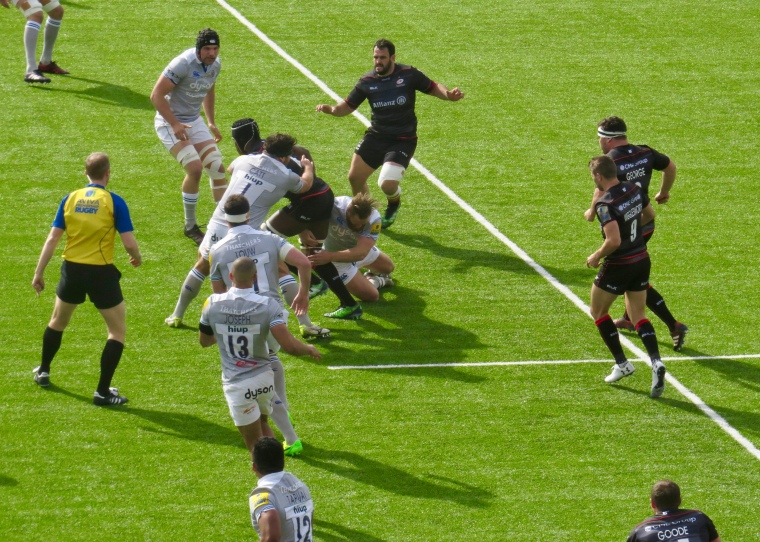 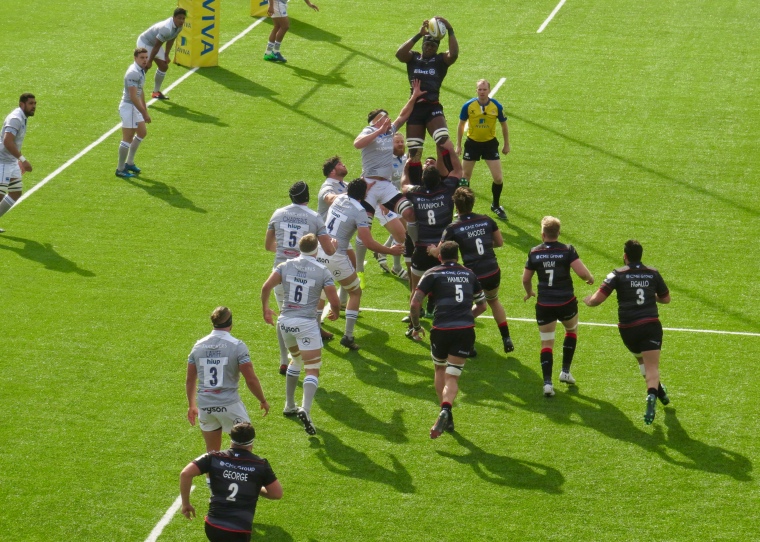 In an interesting move when Bath were awarded a penalty from past the half way line George Ford took the option to kick at the posts, I’d have judged it was outside of his range, had Tom Homer been on the pitch he may have had the boot to get it there, Ford didn’t and the ball went wide.  A team with a different frame of mind to the home team no question. 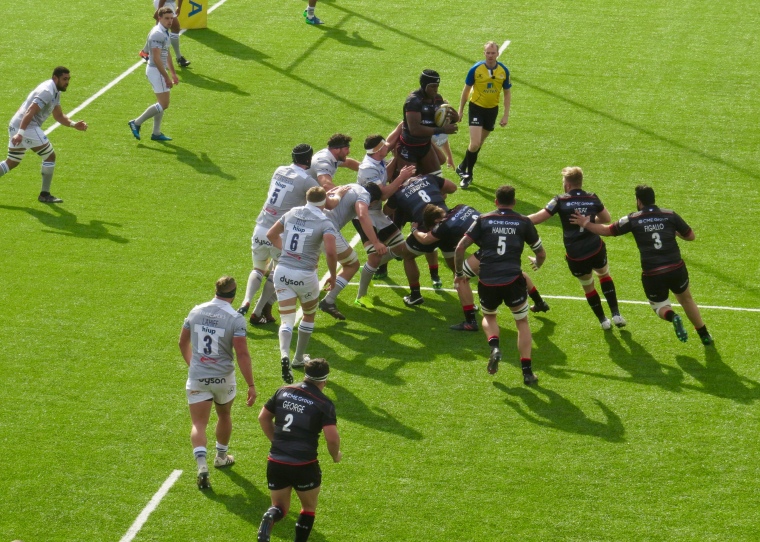 Saracens were welcoming back Alex Goode from a long term injury as well as the international players, Eddie Jones was in the crowd so witnessed a superb team try, started by Goode deep in his own half, the ball found its way to Chris Ashton who broke down the field, Goode was on hand to take the final pass and score Saracens’ second try in the corner.  I am a Saracens fan, but it has been hard to understand why Alex Goode hasn’t been given more of a chance in this England team.  It was a glorious day, but a windy one too, the conversion went the wrong side of the posts.

Bath had a chance to close the gap and went through 21 phases, all defended by the Saracens pack, they did however win a penalty, slotted over by Ford this time.  Bath were awarded a scrum close to the Saracens line, their forwards were again held out, but a superbly timed pass from Jonathan Joseph to Anthony Watson put him through for a try, no mean feat with Owen Farrell and Mike Rhodes attached! Ford converted the try closing the gap to 2.

With Eddie Jones watching his preferred number 10 Ford missed the opportunity to put his team ahead with what looked like an easy penalty, instead Saracens stretched their lead further when Alex Goode became try maker with a clever grubber kick, Sean Maitland pounced on the ball just before it crossed the line, Wayne Barnes needed TMO confirmation but the try was confirmed,  it was Farrell’s turn to miss the kick this time. The teams went in at half time with the score on Saracens 17 Bath 10. 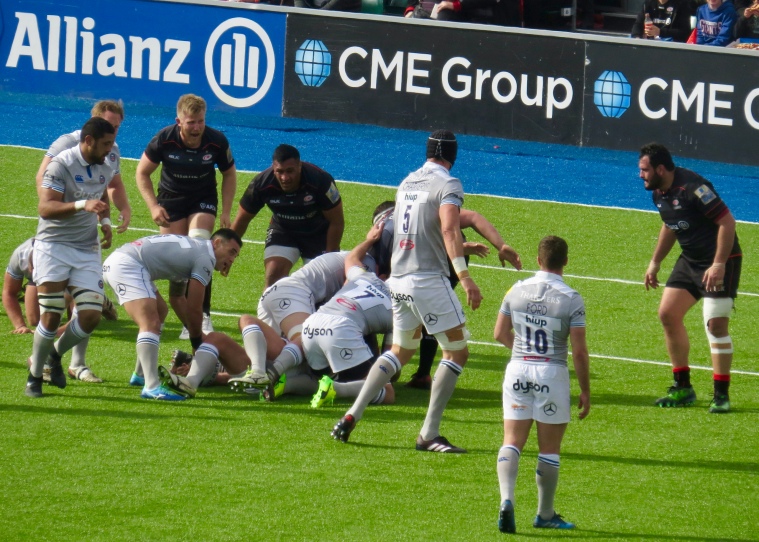 What happened next was I have to confess unexpected, we saw a half of rugby that was Saracens at full force, it has to be said they had a little help from their Bath friends, but the visitors couldn’t live with them.  The second half saw a try blitz with the bonus point try coming from Schalk Brits from another rolling maul, this man has the biggest smile in rugby whether he scores a try or not, it can be seen from high up in the stands, it shines the brightest when he does cross that line.  4 tries and £4000 for the Foundation, great work Saracens!  Farrell added the conversion to the penalty he’d scored earlier in the half. 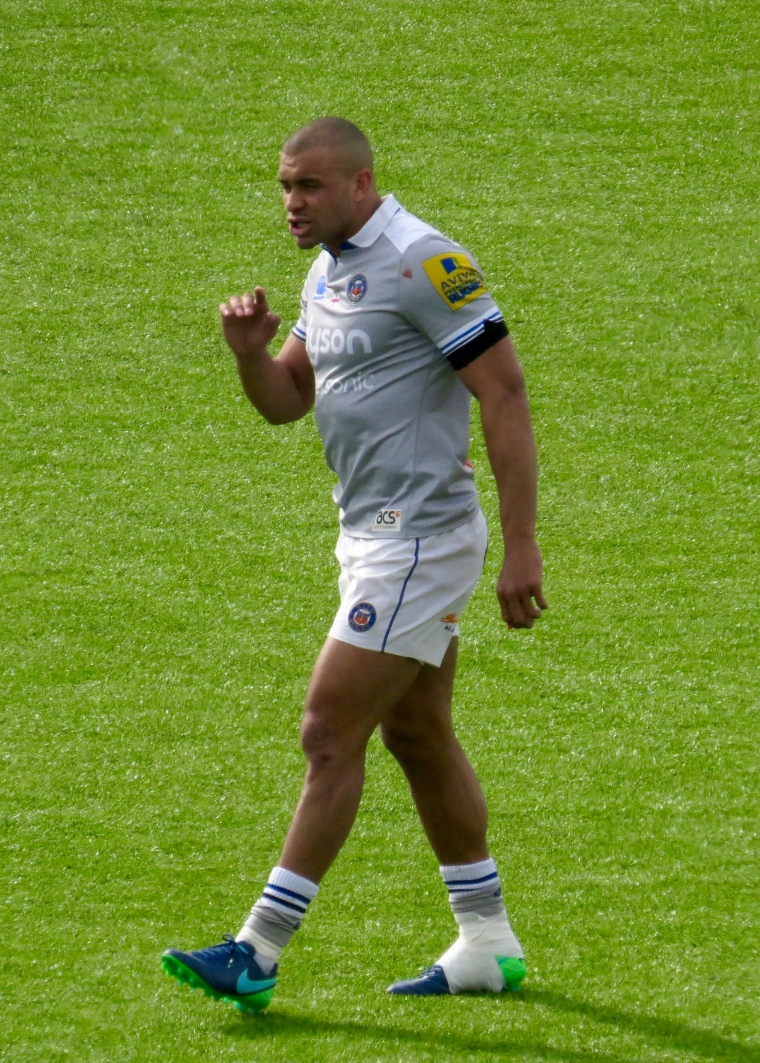 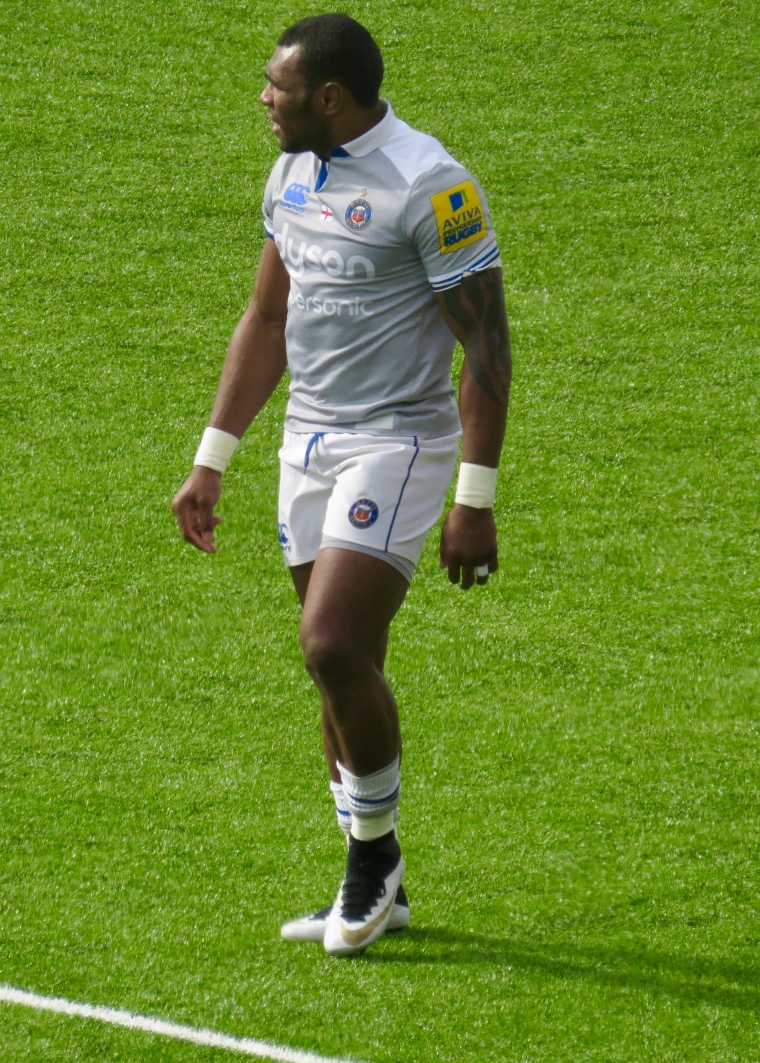 There are several unsung heroes in this Saracens team, Jackson Wray is a favourite of mine, he’s shone week after week.  Captain Brad Barritt was another, he put a big shift in defensively and scored a deserved try, shrugging off the attentions of Matt Banahan as he did so,  to stretch the lead. 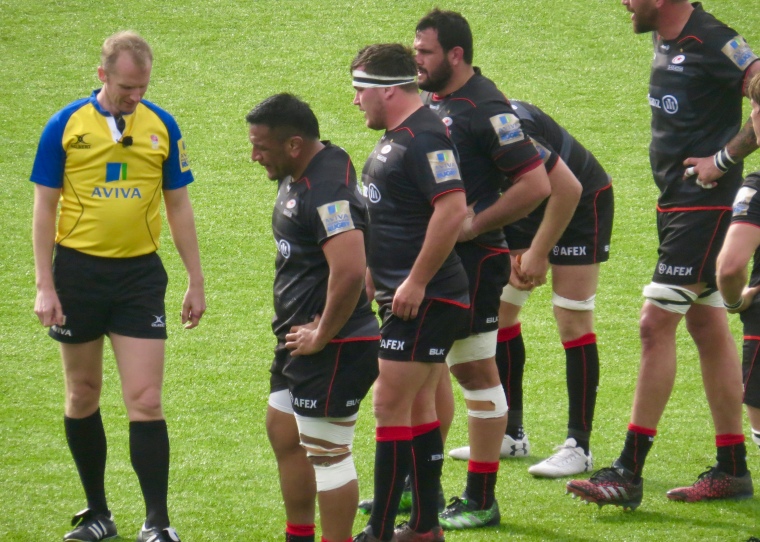 Saracens are getting ready to say farewell to a man who’s become a crowd favourite in Chris Ashton, he’s a player who won’t be forgotten in a hurry, he seeks the ball in Saracens mode and often crops up where least expected, for the 6th try he was out on his wing however as he took pass from Brits, he had the time to ‘Splash’ to the delight of his many fans, Farrell had missed the earlier conversion but made no mistakes for this one. 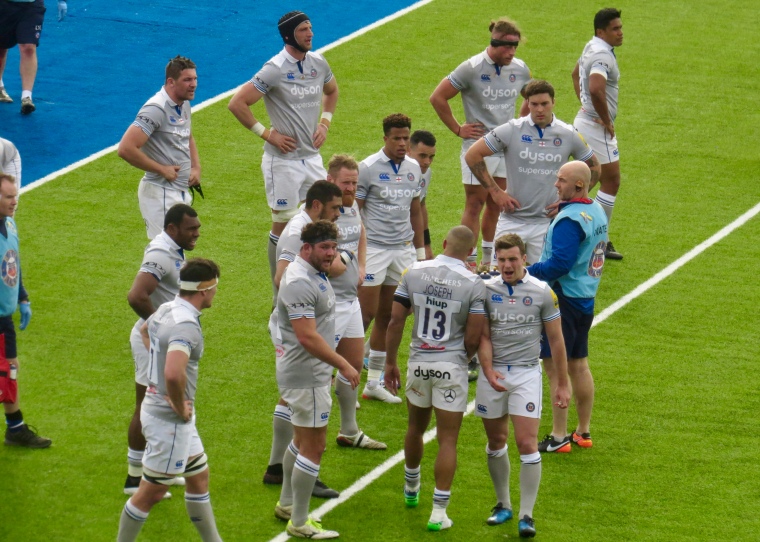 Bath were clearly demoralised after having 6 tries scored against them, a quick tap penalty saw Billy Vunipola get in on the try scoring action, the conversion took Saracens to 46 points.  They weren’t finished and their 8th score took Allianz’s ‘bill’ to £8000 as Chris Ashton sailed through a very static Bath defence to splash again, Farrell again converted taking the final score to a very emphatic Saracens 53 Bath 10.  The Boys were most certainly Back in Town!

With European rugby on the agenda next I really hope Bath find their mojo, my ticket is bought for the Challenge Cup Final, I’d love to see them in Edinburgh! 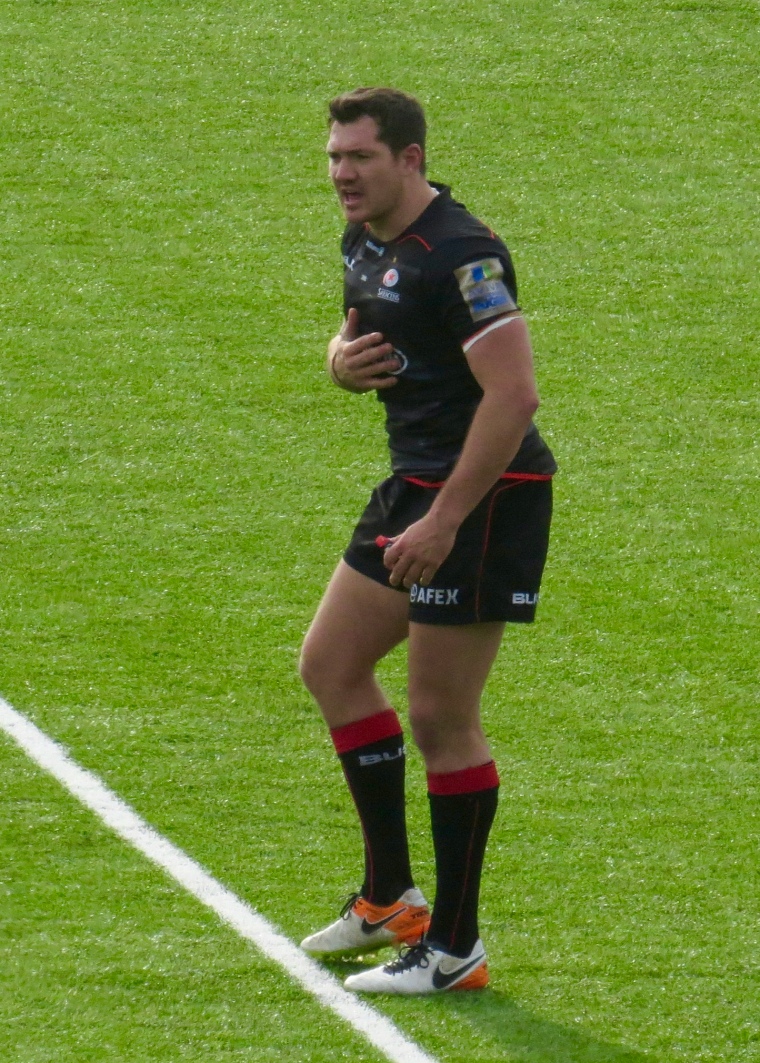