Having been at Lords to see England’s horror show against South Africa I was looking forward to a good game of cricket at the Oval in the opening Champions Trophy match.  I’d only received 2 tickets through the ICC ballot, including the final, but access as a Surrey and England member and persistence with the site meant I’ve ended up with 7 matches including the final. 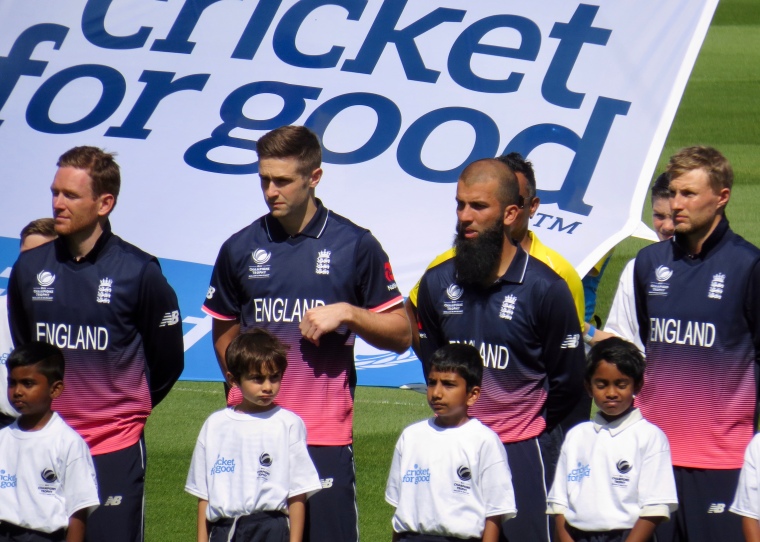 The top 8 One Day teams are taking part in a competition split into 2 groups,t the top 2 in each group will go into the semi-finals.  The competition is short and sweet with the Final  taking place just under 2 weeks after the start.

This was a very different England team to the one featuring in past competitions, they’ve  learnt the winning habit and have a line up that sees one of England’s best cricketers, Jonny Bairstow, without a place in the team. 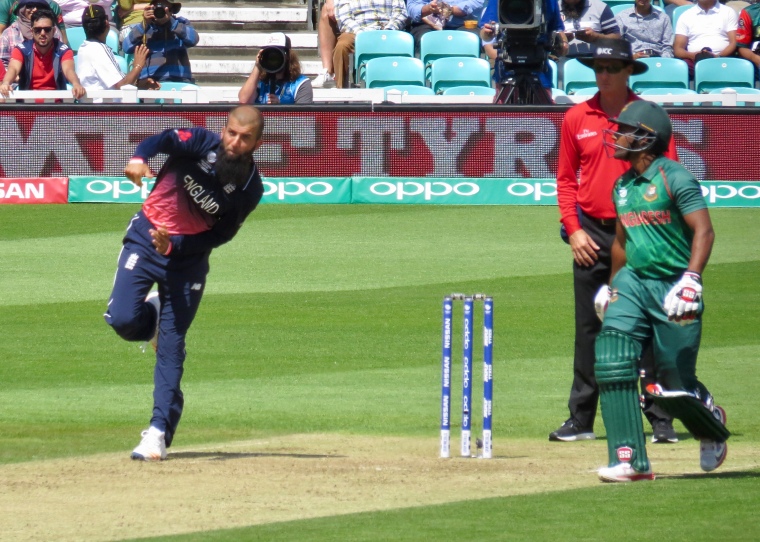 Eoin Morgan won the toss and put Bangladesh in to bat, this England team like to know what they have to do to win a match.  Captain Tamim Iqbal opened with Soumya Sarkar, Chris Woaks and Mark Wood opened the bowling.  It was good to see Wood, he’s had a lot of injury woes.  But, it was Woakes who was to disappear from the field after 2 overs with a side strain that will count him out for the rest of the series.   That meant that Jonny B got to field for most of the Bangladesh innings. 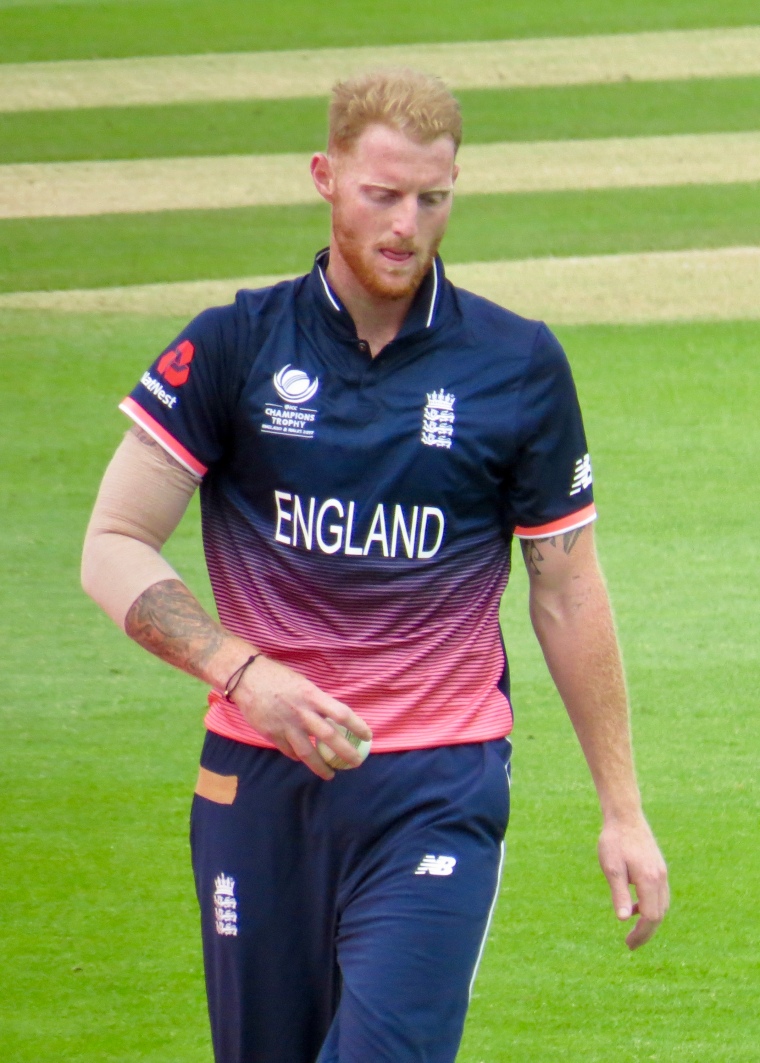 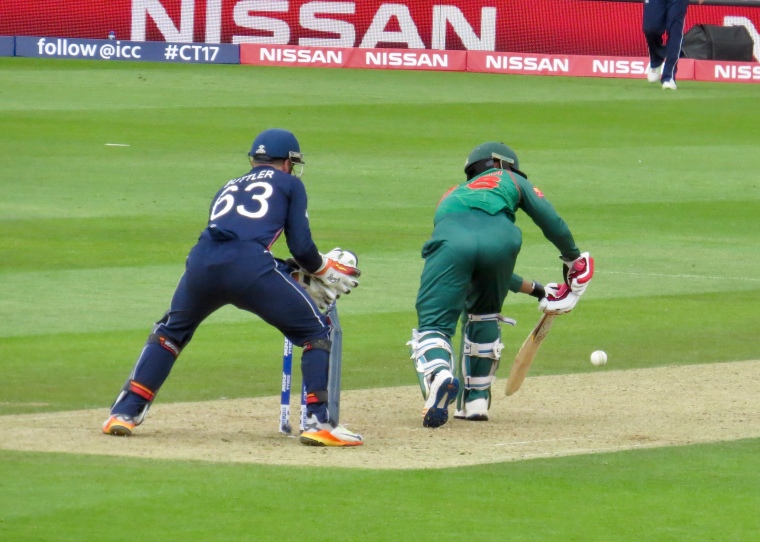 It was Bairstow who took the catch for the first wicket, he caught Sarkar from the bowling of Ben Stokes, he’d made 28 and Bangladesh were 56 for 1 after 12 overs.  Imrul Kayes joined his captain  facing 20 balls before Mark Wood took a spectacular catch from the bowling of Liam Plunkett, he’d made 19 and the score was 95 for 2 . 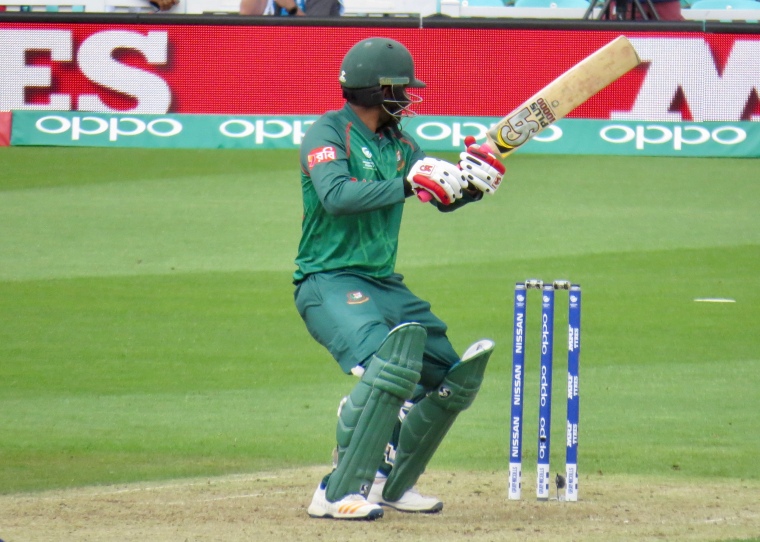 Mushfiqur Rahim was next in and he and Tamim put on something of a batting show, the word I’d use for both men was effortless, they hit everything thrown at them, with the diminutive Mushfiqur making 79 in 72 balls, Tamim was a delight to watch, as he stroked the ball to the boundary again and again. 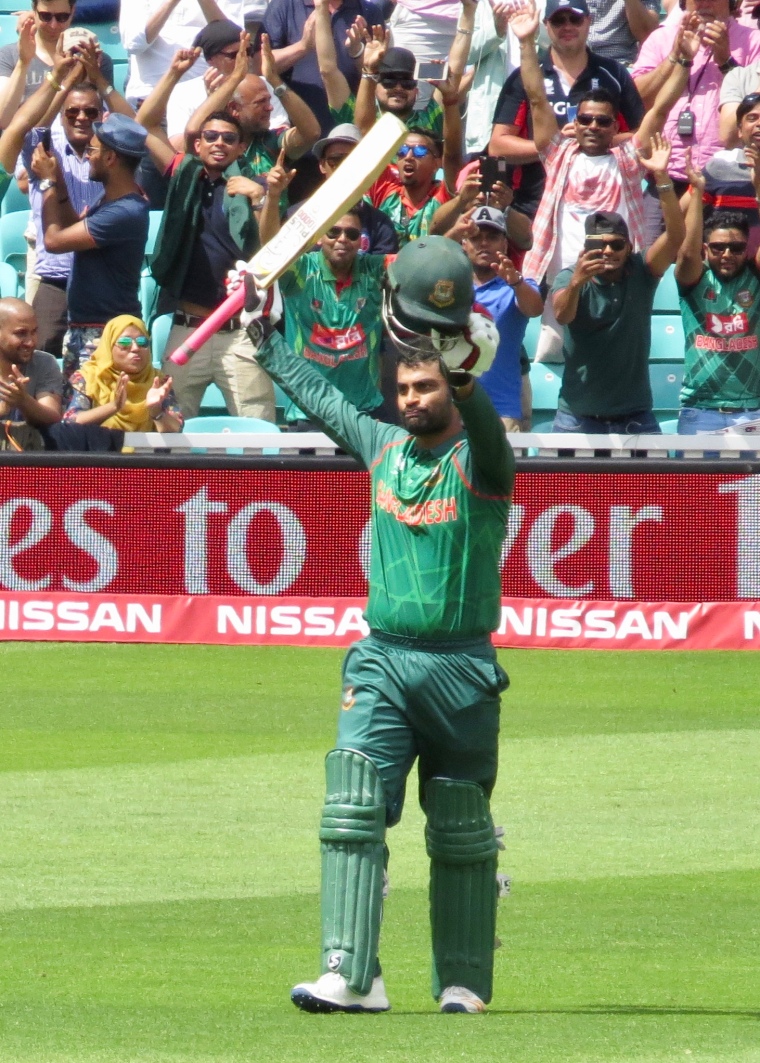 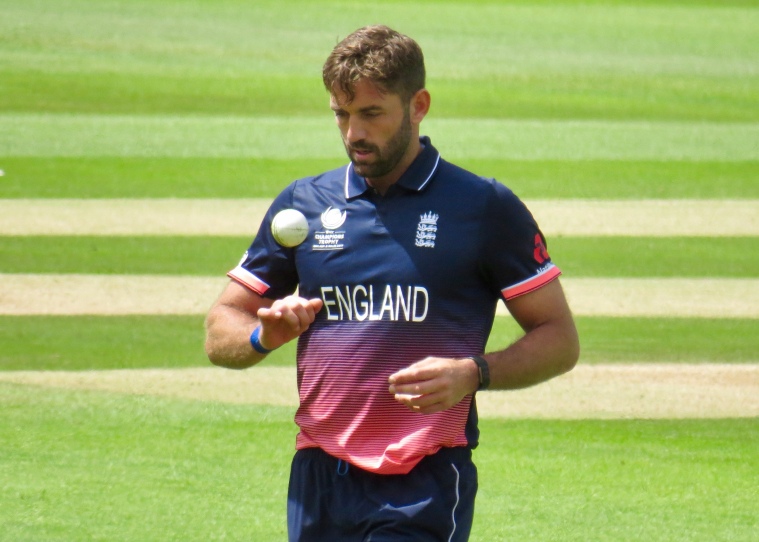 He made 128 runs in 142 balls with 12 fours and 3 sixes.  The pair put on 166 runs before Plunkett finally produced a ball feathered by Tamim to Buttler.  Rahim was caught the next ball, by Alex Hales putting Plunkett on a hat-trick.  That wasn’t to be, the remaining batsmen put on 44 runs to take Bangladesh to a very creditable 305,  Plunkett finished on 4 for 59 from his 10 overs. 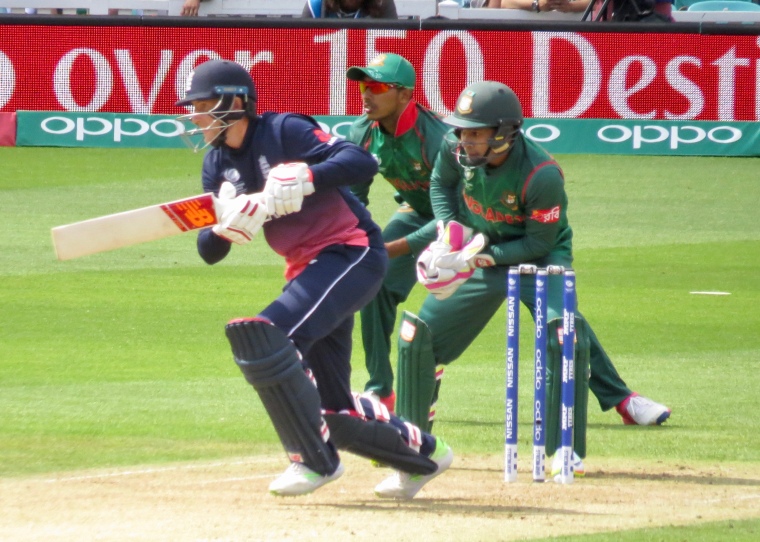 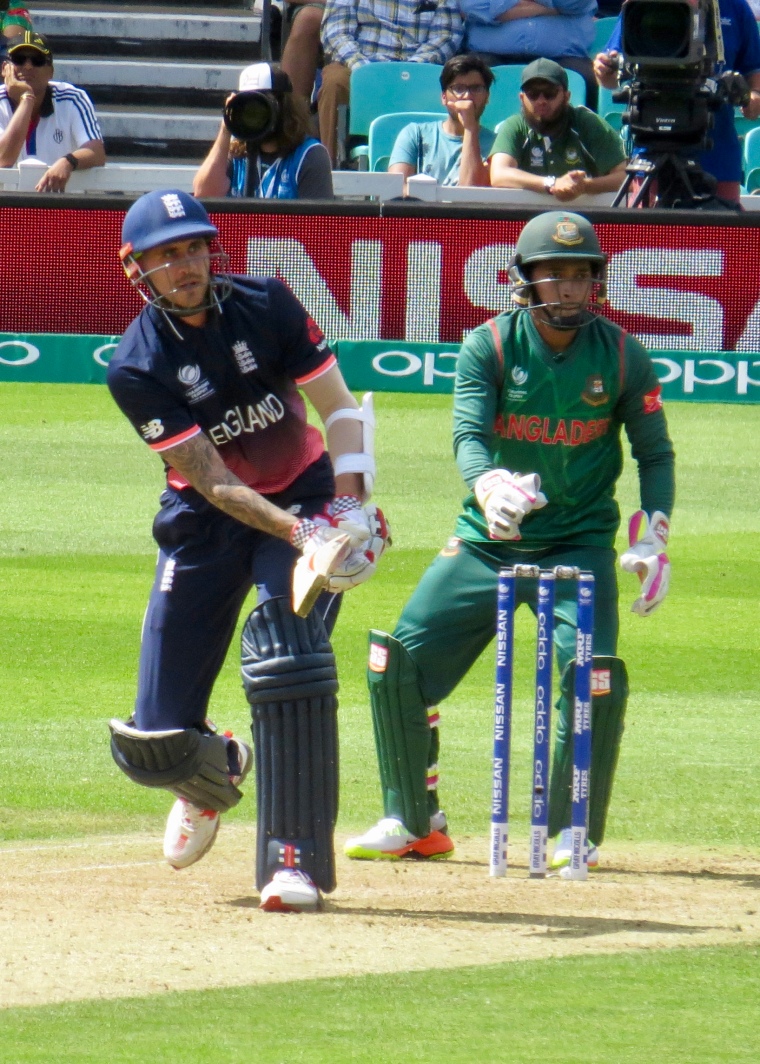 Jake Ball was the most expensive of the bowlers, finishing with 1 for 82 from his 10 overs, I was surprised to see him included rather than Toby Roland-Jones who put in a good shift with both bat and ball earlier in the week at Lords.

The day was a glorious one at The Oval, and as always I met some lovely people, chatting to fellow cricket fans really is a highlight of the day.  England have stuck with Jason Roy and Alex Hales as openers, Roy hasn’t been having a happy time of things and this was to be no exception.  With 1 run to his name he decided to take the sort of shot that should really only be contemplated with a big score on the board, he also clearly hadn’t checked the field placings, he scooped the ball round behind him straight to Mustafizur, the catch was a simple one and England were 6 for 1 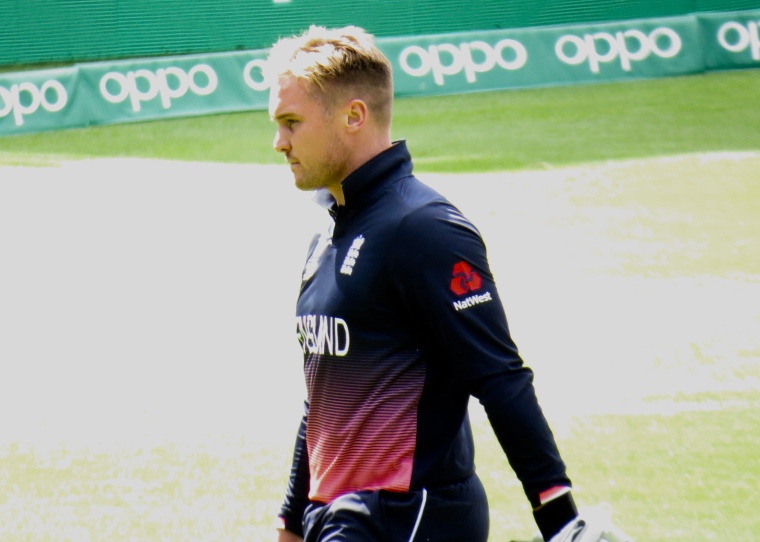 As had been the way for most of England’s Test summer in 2016 Joe Root found himself coming in early at number 3.  Alex Hales and he set about chasing the total set.  It became clear that Root was running awkwardly as the innings progressed, he has a vulnerable back, but I believe he went over on his ankle this time. 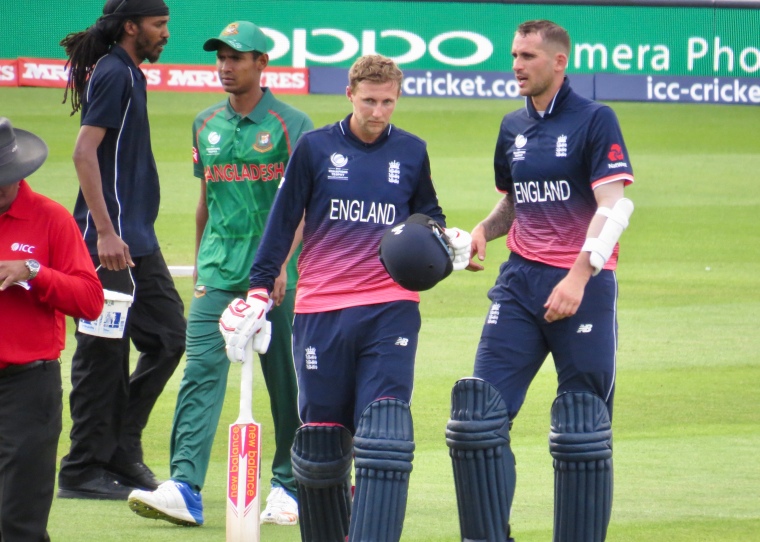 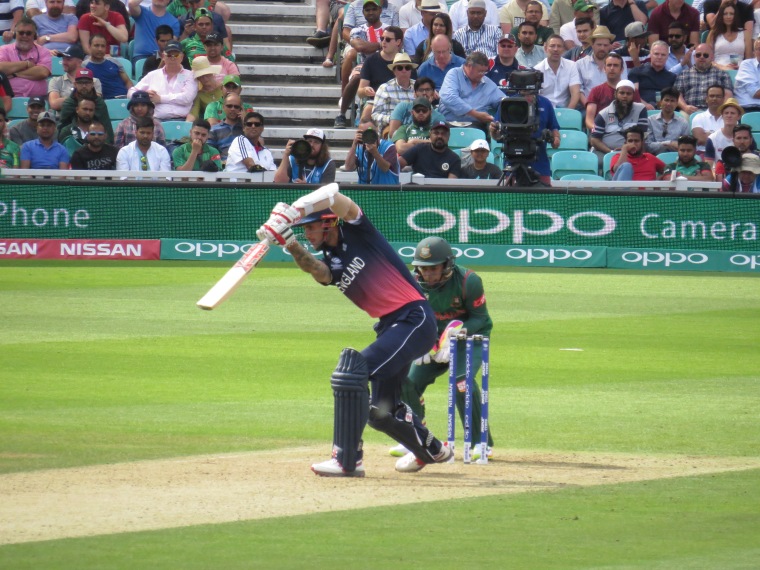 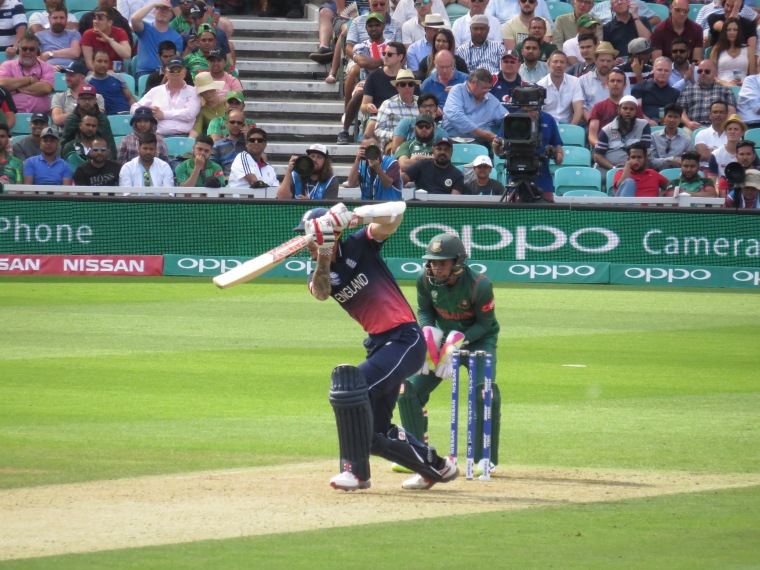 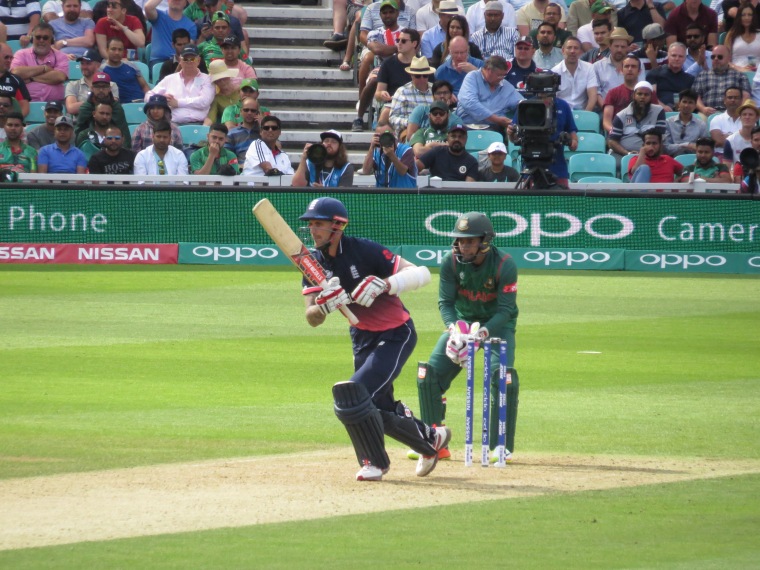 For me, Joe was rather slow to his century, which is sacrilege to say, but he made that 100 from 115 balls and time seemed to be running out at one point.  Hales on the other hand, made 95 runs from 86 balls before losing his wicket so close to that magic 100, he was caught by Sunzamul Islam from the bowling of Sabbir Rahman, his disappointment was palpable as he walked off.

Root and Hales had put on 159 runs for that second wicket, in came captain Eoin Morgan who has also come back into form just at the right time, the steady pace continued for a while with runs mostly coming in singles, before it seemed that Morgan decided to get a wiggle on, bit he and Root lifted the pace and the total of 306 was achieved with over 2 overs to spare.  Morgan made 75 from 61 balls and Root 133 from 129, the runs overtook the balls. 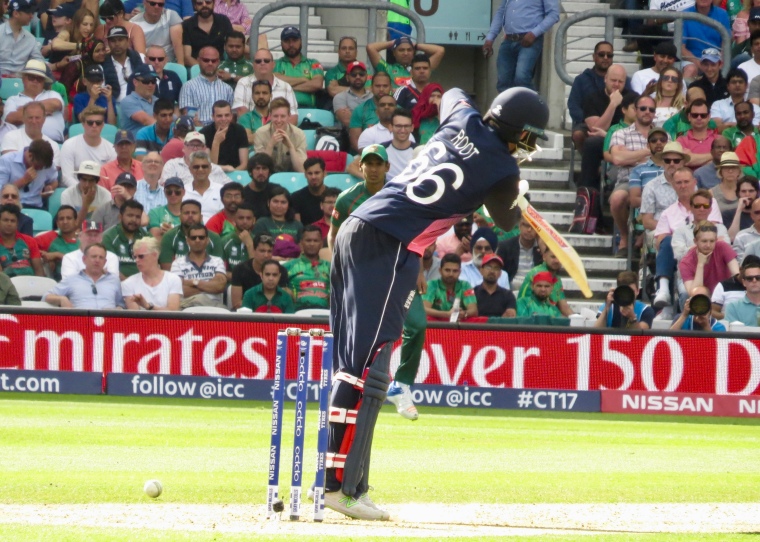 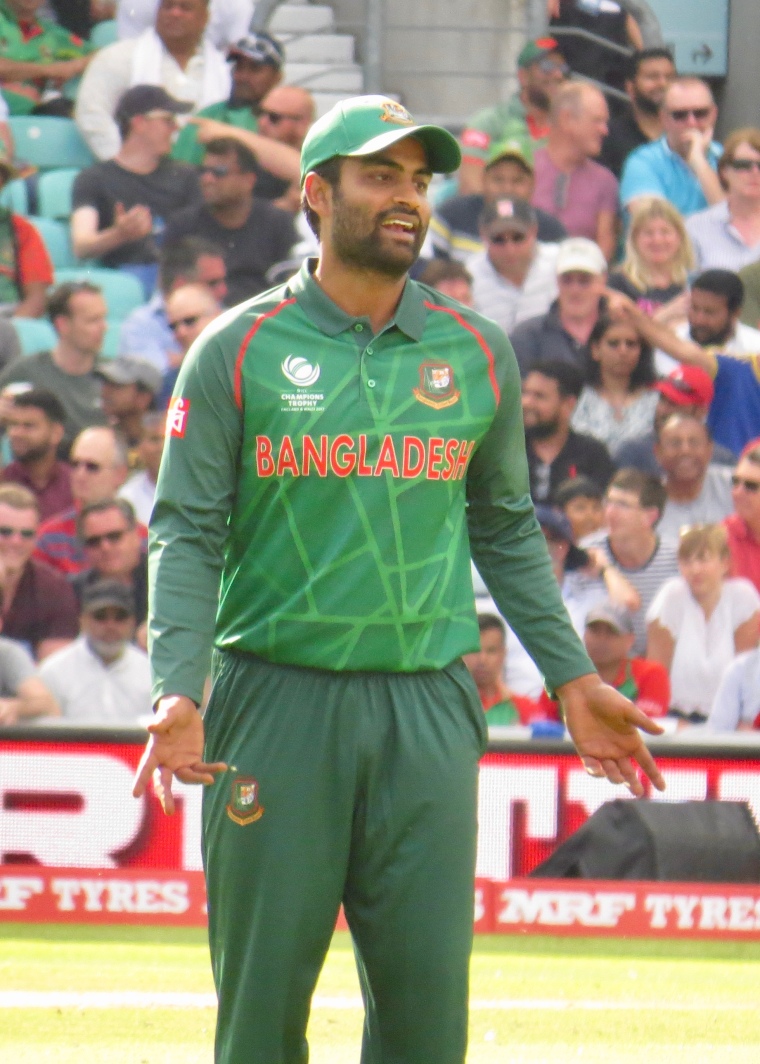 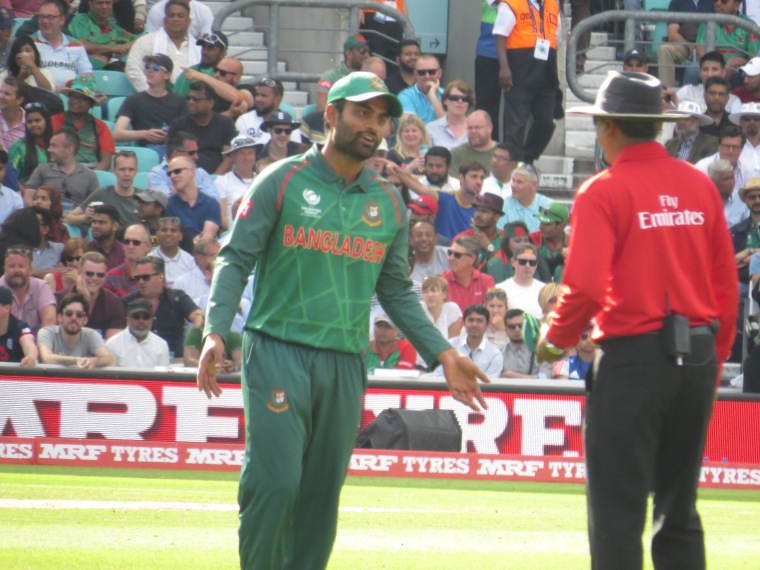 Clearly Root batted through the innings and guided he team to a victory, but I stand by my concern over his strike rate for the biggest part of the game.  England kicked off their account with a 2 point win, the very colourful and vocal Tigers fans were given something to shout about by their captain, although his reaction to being denied a catch took the edge of his day.  All in all it was a great day! 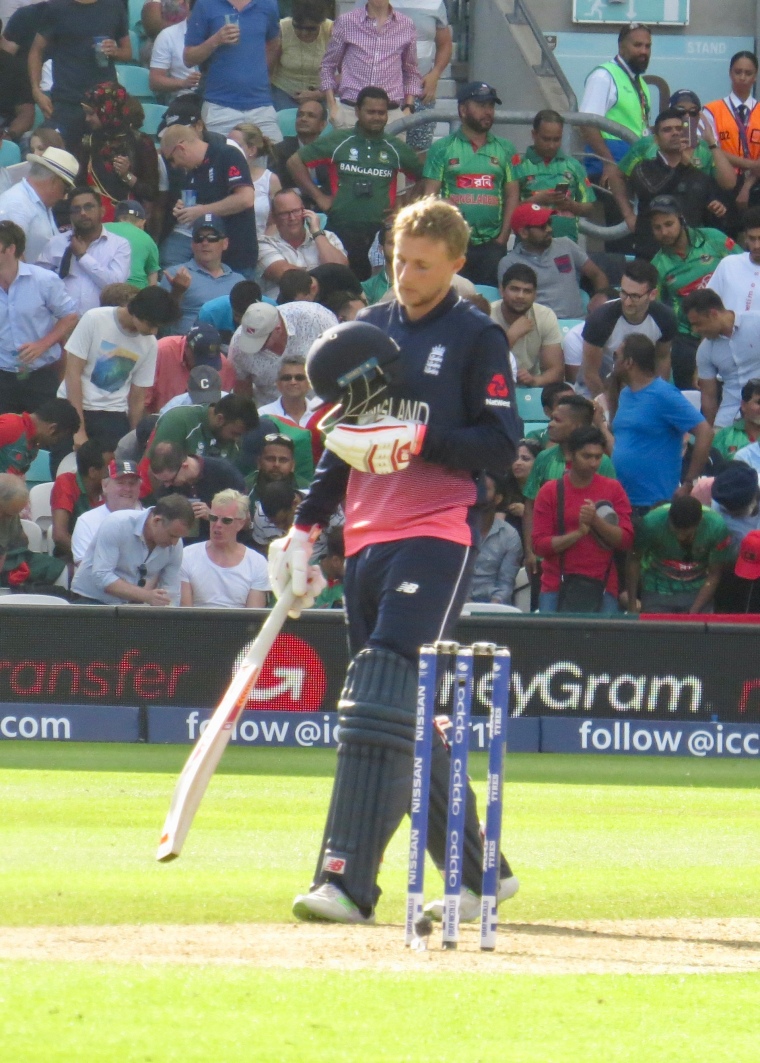