A pleasantly good nights’ sleep in Gloucester saw me awake at stupid o’clock for a Saturday – but gave me time to write about my disappointing experience the night before. […]

A pleasantly good nights’ sleep in Gloucester saw me awake at stupid o’clock for a Saturday – but gave me time to write about my disappointing experience the night before.  I need to make a note to self at this point – Buy breakfast the day before when staying in a hotel!  Note taken on board.

Having only had a Satnav only for the last few years I can’t contemplate how I managed before, this time it sent me on what I thought was an odd direction, but of course Satnav generally knows best!  I forgot to say in my piece about the Gloucester game that the countryside really is beautiful as you head west of Oxford, I genuinely enjoy seeing the lovely sights when I travel a distance.

Rather than stop off I headed straight to Twickenham – having looked for the name of my favourite track on Friday I’d left my phone on the Ministry of Sound album, so dance music all the way it was!

I was incredibly surprised and pleased to realise that drivers on the M4………..  Know how to drive on a motorway!  No middle lane huggers, the inside lane saw lots of action, most unusual! I arrived having only sung rather than shouted, in good time. 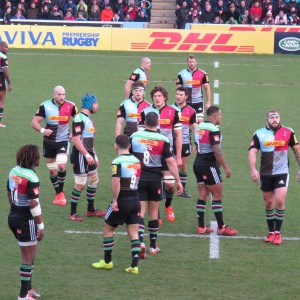 I made for my regular Twickenham haunt Patisserie Valerie, it’s rather odd to think that one of the lovely ladies who works there knows there’s rugby on when I turn up!  My delightful Quins friends Henry and Sue had arrived before me and ordered my Eggs Benedict – what service!  Eggs and the requisite cake later we made our way to the Stoop.

It was clear the capacity of just under 15,000 would be met, from the numbers wandering to the ground, the one ticket that hadn’t arrived during the week was my Quins one!  So a quick trip to the ticket office and off to my seat I went.

Now, I must say here I am a fan of the Stoop and at times Quins too, I probably went along 9 times last season and enjoyed every visit.  I tend to try to sit in the same area, near Henry and Sue, and actually in Sue’s place when work prevents her from coming.  I’ve always found the people around to be great, they even forgave me when I leapt out of my seat yelling when Charlie Hodgson scored an interception try against them earlier in the season.  (I did apologise, but not promise I wouldn’t do it again!)

I sat in what is probably a season ticket holders seat and had a great view!  Had my neighbour been there it may well have been cosy but as it was it was fine.  I confessed my allegiance once we were sat down, and had a little healthy banter, but once the game was started I exchanged good opinions with the Quins fan sat next to me, he was very fair and not one eyed at all.

One of my highlights of the day was the gentleman sat behind me, Adrian, yes he shouted at the ref, but really only in a funny way!  He was a delight the whole game, and I have to say his brother came out with the best line of the afternoon when he shouted out – “Stop wearing your Dads’ kit!”  None of us had any idea what he was talking about!  He was of course referring to the young referee!  It made it funnier that it was so random!

A mention for another group of Quins fans – I’d mentioned that I was writing my blog and at half time they took a photo of the prices in the members bar for me!  Lovely!

Time for a quick mention of the game – I would have predicted an away win, having seen Tigers beat Bath last week I was expecting a repeat performance.  But Quins had other plans, they wanted a win to celebrate Nick Easter’s 250th appearance!  That is some feat by anyone’s standards, and I have to say He has been in great form over the last 2 seasons, he’s giving a good enough show to win an England shirt again! 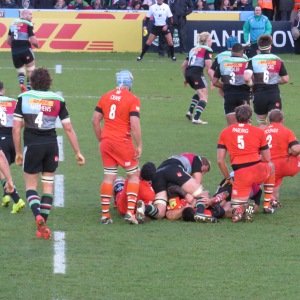 Without writing the match report that will be on InTheLoose.com tomorrow, Quins played a fast paced game and got a bonus point win.  They played the style needed to beat a team with a strong, dominant pack.  There were some excited moments, but my pick is the Marland Yarde try – it was in a way odd to see the space he was afforded to run in his try.

Some facts and figures now

Food to follow when I visit again next week!  Lots of choice when it comes to food – watch this space

Home for me after this game, that involves the South Circular and the A406 for starters – a tip, albeit from a girl – when driving round Hanger Lane know which lane you need, stick to it and drive with intent!

I worked out I’ve driven on the M25, M40, M4, M3 and M25 again while gallivanting this weekend, and not yelled much at all!  Must be a record!  Best song on the way home, having remembered to put my phone on shuffle – Battle by Colbie Caillat – A tad more sophisticated than my last pick!