Having enjoyed T20 cricket at the Oval then Premiership rugby at the Kassam Stadium Sunday brought me rugby league in the shape of London Skolars v Barrow Raiders. Breakfast with […]

Having enjoyed T20 cricket at the Oval then Premiership rugby at the Kassam Stadium Sunday brought me rugby league in the shape of London Skolars v Barrow Raiders. 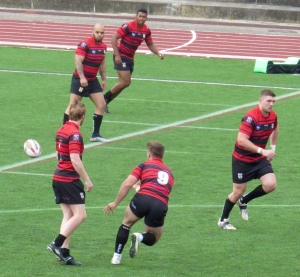 Breakfast with my Saracens friends in Oxford came first – we went to Frankie & Benny’s who did make a bot of a mess of breakfast, but impressively recognised that fact and gave us a 50% reduction in the food bill.

I had a bit of luck on my way to White Hart Lane, my Satnav took me to the M40 via the back roads and I was able to see it was at a standstill before I joined it. Conveniently the A40 runs parallel so unlike many others my journey wasn’t disrupted too much. 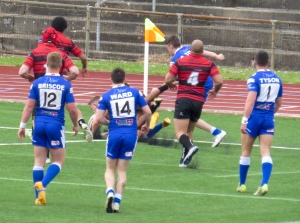 My parents lived in Stokenchurch just off the M40 so I know first hand the story of the Red Kites being re-introduced into the area by John Paul Getty, and although they’re pretty much all over the country this is the area you can see as many as 10 of these amazing birds soaring high together. Driving on the A40 meant the birds were lower and easier to see – lovely!

A bad accident – the cause of the huge jam – meant I had a virtually clear M40, I chose to ignore the instructions to go on the North Circular – I had plenty of time and yuk it’s a horrible road!  So, M25 it was, and being someone who knows how to live, a stop at the services at the A1 junction for Hot Chocolate and a cake!

A drive through Cockfosters and I was in White Hart Lane – being a cheapskate I parked in the road (for free, rather than pay or get a ticket as I did once! £30!).  Barrow had brought a fair few  fans which was great to see! 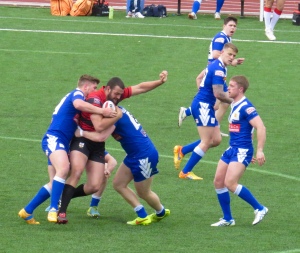 Cumbria is a total mission from North London – but these loyal fans had made the effort and were vocal all the way through the game – credit to them! 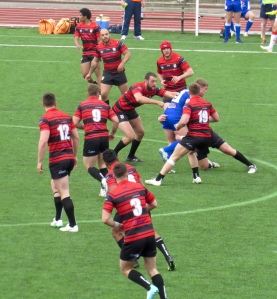 The teams emerged and lined up for a very well regarded Minute’s silence in memory of Danny Jones of the Keighley Cougars who had lost his life 2 weeks previously after leaving the pitch at the New River Stadium. 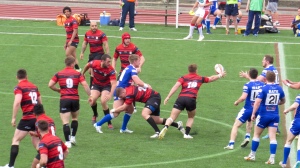 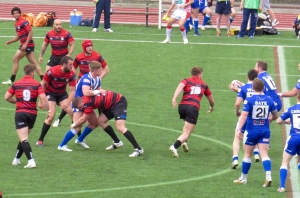 A very traumatic afternoon for all involved I imagine it must have been difficult for some of the Skolars players.  The rugby league world has rallied round Danny’s family and raised funds to help his wife raise their young twins, a wonderful help at such a tragic time.

To a degree the 1st half was a Comedy of Errors – Barrow kicked off, and were gifted a try when Will Lovell spilled the ball, Cameron Pitman scored the 1st try for the visitors, Josh Ward converted.

Barrow had 2 further try scoring opportunities going very close in the corner – I must confess this is only from what I could see at a distance – they were pushed into touch, so no try.  They then went close again after Skolars were penalised for offside, Liam Campbell knocked on.

Skolars failed to clear and were pushed back for a goal line drop out,  a great kick out by Oscar Thomas saw the ball go out and therefore back to Skolars. 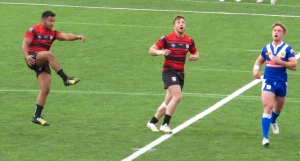 Skolars had a good spell but an intercepted pass saw the ball back in Barrow hands to no avail this time.  But they did score again through the sheer strength of Andrew Dawson – an easy kick for Ward stretched the lead. 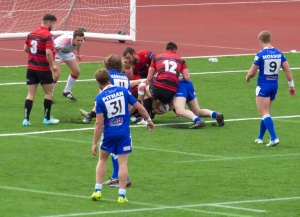 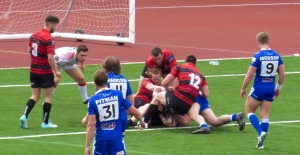 We saw what was certainly for me the 1st 40/20 of the season kicked by Mike Bishay – in spite of the fact I had a team sheet that was the 1st moment I realised he was back in London!  Unfortunately he was injured in a tackle in the next set and limped from the field.

Barrow went close again – but again knocked on – it felt a bit like – how many ways could they find to throw away a try! 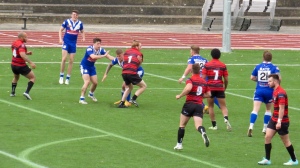 They were awarded a penalty moments later and Josh Ward added the 2 points – I have to say he had one of the most complete kicking at goal on a rugby pitch, performance I think I’ve ever seen – Barrow had better hope union don’t spot him! 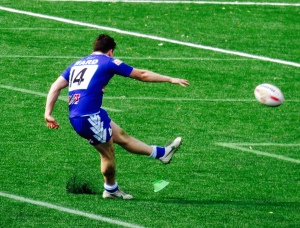 Skolars looked to have got a score on the board, but the touch down was deemed a double movement. Ward did however add another penalty.

The 2nd half started with a Barrow error, Liam Campbell let the ball bounce from the kick off, never a good plan on an artificial surface!  Skolars came up with the ball, but Campbell turned from Sinner to Saint as he took the ball from the kick into goal and made a good distance. 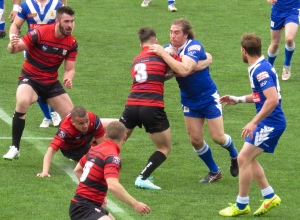 Skolars had a go at squandering a try after Will Lovell dropped the ball in the tackle after collecting a wild pass.  This was the start of a run of errors with Barrow again eschewing the chance to score being held up then knocking on. 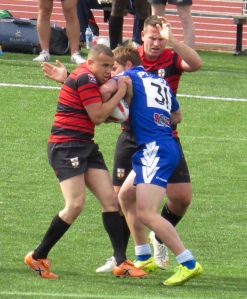 Skolars were the 1st to score in the 2nd half when Liam Harrison went in under the posts with 3 men on his back,  Thomas converted the try to close the gap to 10. 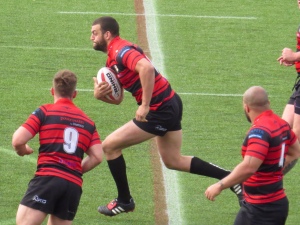 Barrow stretched the lead to 12 after Ward kicked another penalty, Skolars were penalised for offside, Dave Ellison could have been penalised before that point as he threw a nasty looking no arms tackle.  Ward made no mistake with the kick.

The score at Skolars 6 Barrow 18 was a respectable one – but momentum swung the way of the visitors as they went of a 4 try scoring fest!

All 4 were converted by Josh Ward – the try scoreers being Liam Harrison, Ward himself after a great break by Liam Campbell, Anthony Bate scored a cracker and Peter Lupton (a blast from the past for London fans) finished off the scoring for the afternoon – with the conversion from Ward of course. 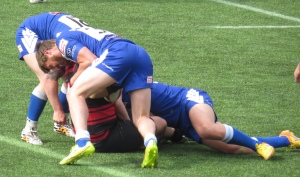 The game finished on London Skolars 6 Barrow Raiders 42 – a good performance by the visitors, making the long journey worthwhile for their fans.  Things to work on for Skolars, although there were glimpses of promise throughout.

The afternoon was a convivial one again – it’s a good job I love to watch skilful play, Barrow were fully deserving of the points.

No points to note from the day, real ale was being imbibed – I’ll try to check the prices out next time! 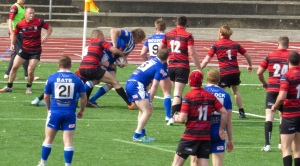 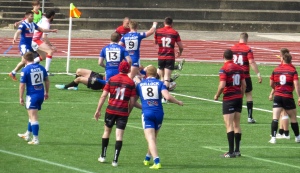