Game 2 saw one of my main reasons for being in Blackpool – London Broncos! This is a team who are a real passion of mine and have been for […]

Game 2 saw one of my main reasons for being in Blackpool – London Broncos! This is a team who are a real passion of mine and have been for 19 years now!

I was hooked when I went to see them play St Helens in the 1st season of Superleague in 1996.  Being a Broncos fan has to say the least been at times – difficult! 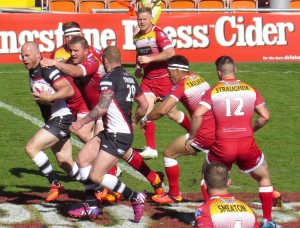 At one stage last year it looked like the club wouldn’t survive, and no pre-season added on top of an exodus of players meant only a solitary win and relegation from Superleague. 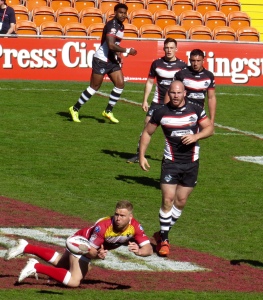 the 2014 season was like watching men against boys, it wasn’t the deepest of joys! It must have been soul destroying for the players .

The Kingstone Press Championship season had seen Broncos win 6 of the 12 games they’d played putting them in 7th spot.  Their opposition Sheffield Eagles were flying high, sitting in 3rd with 9 of their 12 won.

One of those victories for Eagles was a big win against Broncos they scored 40 to Broncos 6 – I was at that match in Doncaster on what was a freezing cold afternoon!  It felt rather like going back to 2014, although it has to be said Broncos lost 3 key players to injury early on.

It was a surprise to see Andrew Henderson – Broncos coach – in a team shirt; a classy player who I thought had retired, it turned out to be a good move.

If I’m honest I wasn’t expecting what happened in the 80 minutes – to say Broncos turned the tables would be an understatement! 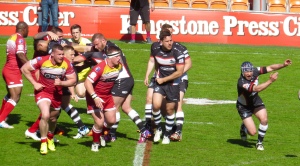 The crowd had been swelled by Bradford Bulls supporters – it was great to hear the noise when Elliot Kear who’d made 59 appearances for the Bulls scored Broncos 1st try after an early penalty!  Broncos have a loyal fan base – but it is a small one, it was lovely to hear Broncos shouted so loudly!

Wes Naiqama who was in fine form with the boot added the extras – A good start by Broncos!

For some reason I always shout my loudest when I’m watching Broncos and an 80 metre run up the pitch by Rhys Williams had me leaping in the air too!  It’s always great to see a player at full speed – especially when he plays for your team!

Naiqama added the extras and was lining up another conversion only minutes later after Ben Hellewell collected Tom Gillmore’s grubber kick to score in the corner.  Naiqama converted again!

Those Bradford fans added their voices again when Elliot Kear scored his 2nd try after a pass from Ilies Macani – Naiqama’s successful conversion put Broncos ahead by 24 points with only 16 minutes on the clock!  Excited didn’t really cover it!

Oscar Thomas was next to score after a great effort by Wes Naiqama and Elliot Kear – unusually Naiqama missed the posts this time. 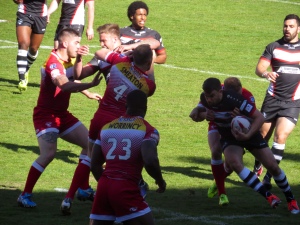 Sheffield put points on the board with a try by Cory Aston converted by Dominic Brambani – good to score before half time but they faced an uphill battle with the teams going in at half time  with the score on London Broncos 28 Sheffield Eagles 6.

The 2nd half saw more of the same from the Broncos as Elliot Kear became provider for Oscar Thomas’s 2nd try, Naiqama made no mistake with his kick.

We had a dry spell for 14 minutes, both teams pressed and credit must go to the Eagles who didn’t give up their efforts in spite of the deficit.  Oscar Thomas scored his Hat trick try running a jump and down exciting 60 metres to do so!  Naiqama of course added the extras.

Broncos hadn’t finished with scoring Rhys Williams scored his 2nd try of the game, scoring in the corner he left a difficult conversion for Naiqama who was again successful.

The final score was London Broncos 46 Sheffield Eagles 6 – I’d say the best performance by Broncos so far this season!

Was it an act of genius to include Andrew Henderson in the team – his after match interview is certainly worth a watch –  a man with high standards he certainly led by example! 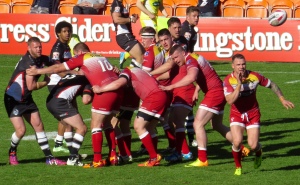 I bumped into Steve McCormack the Scotland RL coach, his comment on Andrew?  I might get to include him in the Scotland team!  Now that would be a turn up! 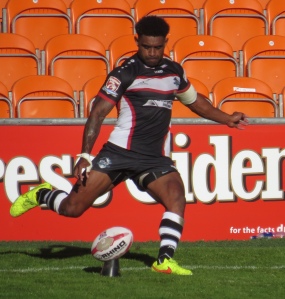